I hate housework! I always knew I would. When I was eight years old, I made my first career decision. I told my mother, “When I grow up I’m getting a job and I’m gonna earn enough money to hire a maid so I’ll never have to clean a toilet. I didn’t want to mop floors either. So, I went to work, and as soon as I had the most basic necessities covered, my next dollars went to hiring a cleaning service. And I lived happily, not cleaning bathrooms – almost ever after. Then, this virus happened and now I’m on my own.

Once I had just one job. I worked in an office – with people. I had meetings. I closed deals. And I usually got off at five. Now I work from home, locked quarantined which is just another word for imprisoned. I might as well be a thousand miles away from stores, malls, and the society of other people. And I have not one, but four jobs – and I never get off work. I forage for food, cook it, and preserve it. I sanitize, sweep, mop, and scrub until it’s time to sit at my computer to work from home.

Securing food and other basic necessities of life used to be simple and secure. You forgot the toilet paper? No problem. Just run to the store. Now, like a subsistence farmer, I’m dependent on unpredictable harvests of grocery store deliveries, and their crops are seriously subject to droughts. The night before my delivery is supposed to come, I pace the floor, worrying that it may not come. Like an inept farmer, I don’t know what will grow so I plant twice what I need.

When at last it arrives. I cover myself in an apron, Uggs, and latex gloves, and rush to gather it from my front steps. I expect some crops to fail. Some fail every time. This time there are no eggs, cheese, or butter, and for the third time in a row, no pickles, and I wonder out loud, “Who’s eating so many pickles?” 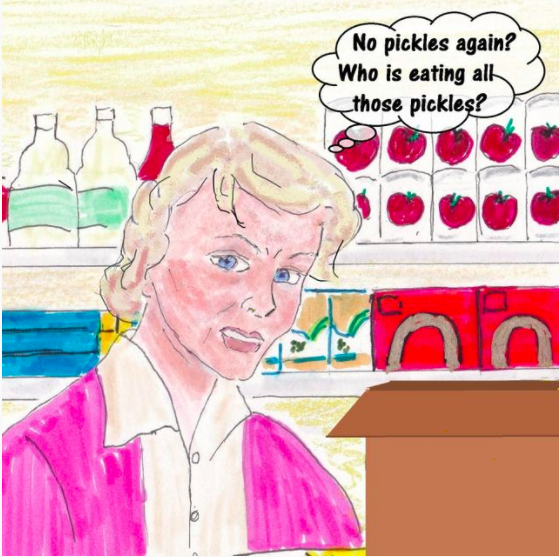 But I have a dozen tomatoes, seven apples, and five of the biggest onions I’ve ever seen, along with seven carrots and a ten-pound bag of potatoes. How will I use so many potatoes? Could I trade some for pickles? I have to figure it out because we can’t afford to waste food. There’s no telling when we will get more.

I continue to assess my haul – there are none of the hamburgers I ordered, but they sent two steaks and one chicken breast. We also have four sacks of all-purpose flour, and for some reason, a forty-eight-ounce jar of apple sauce.

The fear of famine drives me to work furiously to preserve every morsel lest it goes bad before we can eat it. Pots of spaghetti, tomato soup, and chicken cacciatore bubble on the stove, while I sauté onions and peel potatoes. I’m making stew so I can stretch the two steaks into four meals. How many potatoes can I use in the stew before they overpower the two steaks?

I’m exhausted, but I still four have tomatoes to use. I’d make tomato pie if I’d had butter to go with the flour. Now for the apples. In the pantry, I find a dry brick of brown sugar, but I make it work for apple pie filling, which I’ll freeze until I can get butter to make a pie shell. 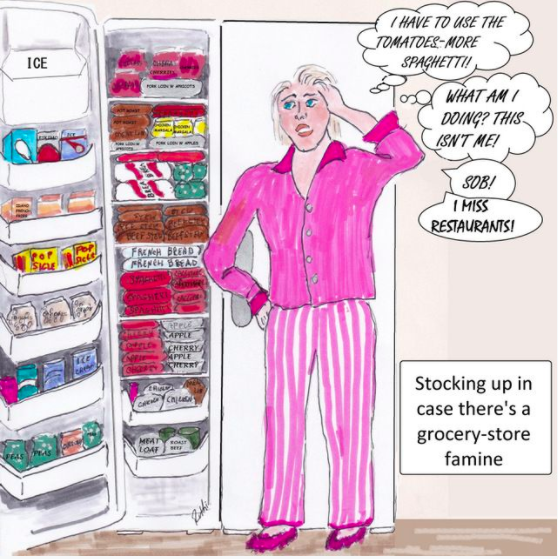 When the food cools, I load it into freezer bags and stack them in the freezer – squeezing room around the seven loaves of bread I hadn’t ordered but had come as a surprise in the last delivery.

It’s nearly seven. We have spaghetti for dinner and I flop on the couch to watch Jeopardy. I miss clues I should know and I’m sure my brain is dying. 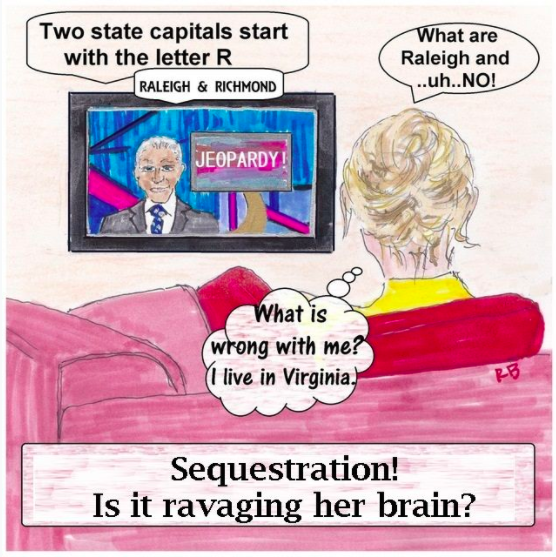 It’s morning. I’m awake. I think, “What do I have to look forward to today?” Cleaning the house. I turn over and go back to sleep for another half hour. Want to know the worst thing about cleaning the house? There is no closing the deal, no bottom line. In a week it will be as though it had never been done. I’ll have to do it all over again.

Finally, I get up and dress. I sweep. I mop. I pass the bathroom and glance at the door, but I don’t go in. How long will this virus thing last, I wonder, and will it end before I have to scrub the toilet again?

Finally, I’m done with cleaning and go to my computer and do the job I get paid to do, so I’ll have the money to pay a cleaning service someday – if such services will still exist.

May 28, 2020
WANT MORE RUTHI?
Subscribe to my newsletter!
Get latest updates and exclusive content straight to your email inbox.
Give it a try, you can unsubscribe anytime.