Who Eats Meatballs on an Airplane & Why Do They Sit By Me?

Have you ever been caught up in a terrible predicament you were helpless to get out of? Then you ask yourself the question – How did I get myself into this mess?

It was my own fault – I could have bought my own airplane tickets. But no! I had my assistant get them. I shouldn’t have assumed she’d know where I’d want to sit. But I did. I should have checked my seat number before I was getting on the plane. But I didn’t. 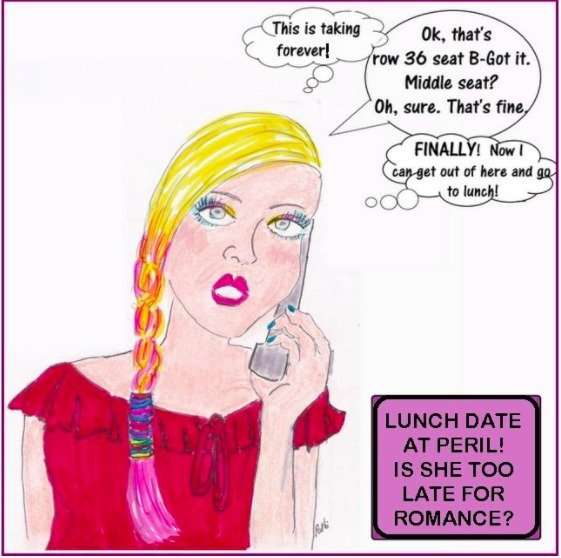 So, I didn’t know till I boarded the plane that I had the middle seat in the very last row – a few feet from the toilet and across the aisle from a man who was already snoring.

I put on my headphones and opened my book, telling myself I could endure anything for a couple of hours. Then, I looked up and saw a boisterous family come bumping and joggling down the aisle – and they were headed directly toward me. Maybe I’d misjudged my power of endurance.

Suddenly, I was surrounded – jammed between two oversized, bickering teens, and with a joke-cracking mom, nitpicking dad, and sticky-looking toddler in front of me, and the toilet behind me. The family talked non-stop and punctuated their comments with wild gesticulations, and the toddler kept standing on the seat and holding a half-eaten, half-smeared on her face chocolate bar. 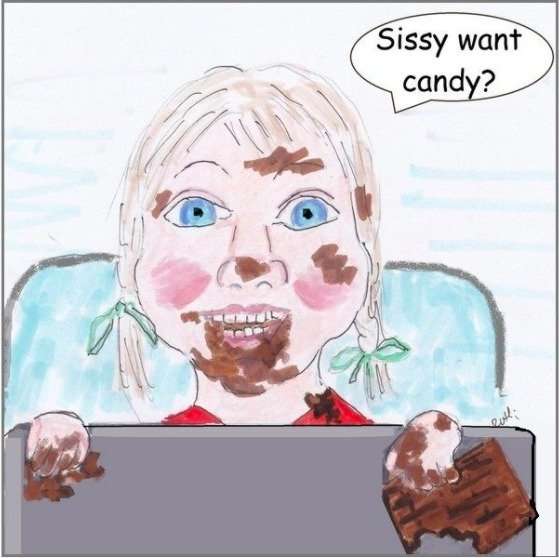 I offered to take either window or aisle so the teens could sit together.

“No. I hate getting squashed,” said the boy. “Me too,” said the girl with a loud pop of her gum.

The flight attendant came by, looked at me sympathetically, but gave the international palms-up sign for, “There’s nothing I can do. You’re stuck.”

I turned my headphones to silent mode and resigned myself to accept the things I could not change.

Then, before the plane even left the gate, Mom jumped up and stood on her knees on the seat, leaned over, and asked, “Who’s hungry?” in a voice that made it seem she might be asking the whole plane.

Of course, they were in need of food – it was a whole two-hour flight.

Other passengers turned to look at me, some sympathetically, others just happy they weren’t me.

Mom stood up, knocking the headphones off the man in front of her, and took a greasy-looking box from where it sat on some man’s suitcoat in the overhead. Even before the box was open, the smell of garlic, onions, and cheese poured out.

Mom gave the box to Dad, and she was on her knees again, leaning over the seat. “Who wants a meatball sub?”

She couldn’t mean it, I thought. Who eats meatballs on an airplane?

“I want the sub,” bellowed the boy on one side of me. “It’s cheesesteak for me,” announced the girl on my other side. “Is there any mustard?”

Who puts mustard on Philly cheesesteaks?

“Here you go,” said Mom, tossing her the little yellow packet that was destined to squirt on my jacket.

The seatbelt sign came on, but the woman stayed up. The attendant came back and told her to sit down and buckle up, and gave me a look so pained I thought she might cry.

Finally, the plane took off. Good! Only two hours to go, and they’re almost through eating. But they weren’t. Dad turned now, and asked, “What some fries?” He passed the greasy container to the boy. The girl wanted some too, so he passed the container across me, and two slinky limp fries plopped onto my lap.

When the captain turned off the seatbelt sign, up popped Mom again, saying, “Did I tell you Sally is going to be at Grandma’s this week?” Blank stares from the teens, so Mom spoke louder. “Sally! You remember her. She came to your fourth birthday party. I can’t believe you forgot her!” She punctuated her exclamation with a chopping hand gesture that just missed my nose.

Then the woman seemed to notice I was there for the first time. She grinned good-naturedly and said, “You’ll have to excuse us. We’re all keyed up because on our way to a family reunion. You know how families are.”

No – I didn’t know how some families are, but I was learning.

I didn’t actually wish for turbulent weather, but maybe just a little bump to make the captain would turn the seatbelt sign back on. I closed my eyes, leaned my seat back the half-inch it would go, and tried to imagine I was someplace else, someplace better … like …. anywhere.

Of course, this happened in those carefree, pre-virus days when we didn’t have to worry about a deadly virus running amok in the plane and threatening to infect us. Ah, for the days when getting stuck in a bad seat was our greatest fear when flying. 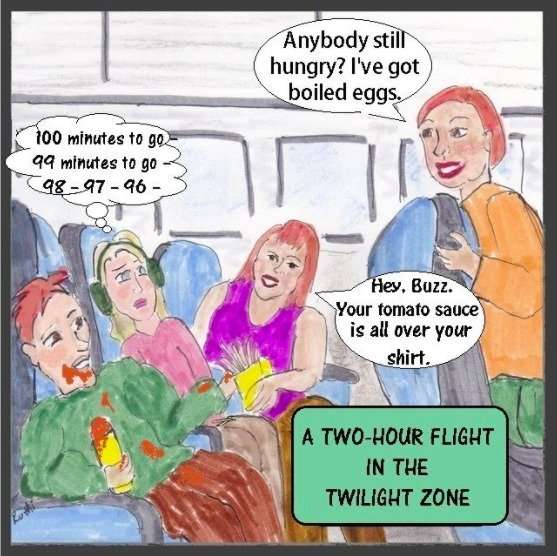 July 23, 2020
WANT MORE RUTHI?
Subscribe to my newsletter!
Get latest updates and exclusive content straight to your email inbox.
Give it a try, you can unsubscribe anytime.