When Whiskey & Sin Were All They Had to Worry About

Two things made Petain Street different from any other street in the world – at least that’s how it seemed when I was nine.

One was old people – we had more old people than any other street, anywhere. Every afternoon you could find two or three old ladies sitting on the various front porches, “just passing the time of day,” which meant talking about the comings and goings and doings of folks on the street. 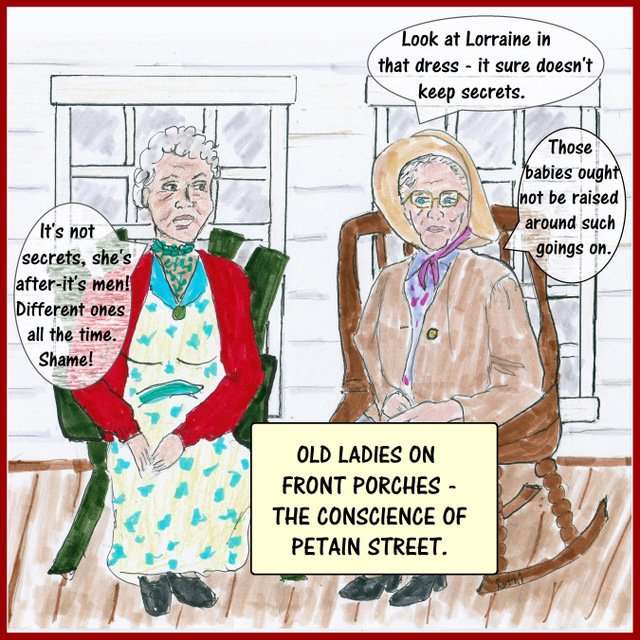 The other thing was the ditch – they called it a creek, but it was just a ditch with no more than a trickle of water and lots of tadpoles. Anyway, it was a landmark and a boundary that split the street in two and separated the kinda poor end (our side) from the really poor (the other side). The two ends were as different as night and day – or dusk and day really – because the same muddy, red-clay road ran through both sides equally.

Grandma and I lived with my mama and daddy on the kinda poor side, where the grass was cut, the houses were painted, and most of the people who lived in them were old – Grandma, Mrs. Summerall, Mrs. Gates, Mrs. Burns, Mrs. Weaver, Mrs. Ward, and Mrs. Honeycutt. There was only one other child my age on the street, so I grew up with plenty of time to spend sitting on front porches, listening to their old stories and their reckonings about what was good and bad in the people who passed by – and what they ought to do to be better.

The person they reckoned about most was Lorraine. She was the youngest grownup on the street; she was pretty and lively, and not married – and she had children that she was definitely not, “raising right.”

I was sitting on Mrs. Gates porch shelling butter beans with her and Mrs. Weaver when Mrs. Honeycutt passed by. Mrs. Weaver called, “Good afternoon, Miz Honeycutt.” Then she whispered to Mrs. Gates, “There goes as fine a Christian woman as you’ll find – in church every Sunday!” Then she frowned so it added to the wrinkles on her forehead. “But that son of hers! He’s never darkened the church door. He’s on the road to hades. ” Hearing her say that made me proud because nobody went to church more than my mama – every Wednesday night and twice on Sunday. But Daddy hardly ever went and sometimes I worried that he might go to hell too.

Drinking whiskey was so shameful the ladies wouldn’t even say the word out loud, but only in a whisper.  “I ran into the Honeycutt boy in the store,” Mrs. Gates said, then whispered, “He smelled of whiskey!”

Laziness was another sin and lazy people were just plain sorry, like Mrs. Wilson. Mrs. Ward said so. “I saw Mr. Wilson hanging out the wash again, and after he’d just put in a hard day at the mill. Sadie Wilson is just sorry lazy. I don’t see why he doesn’t send her right on back to her mama.” 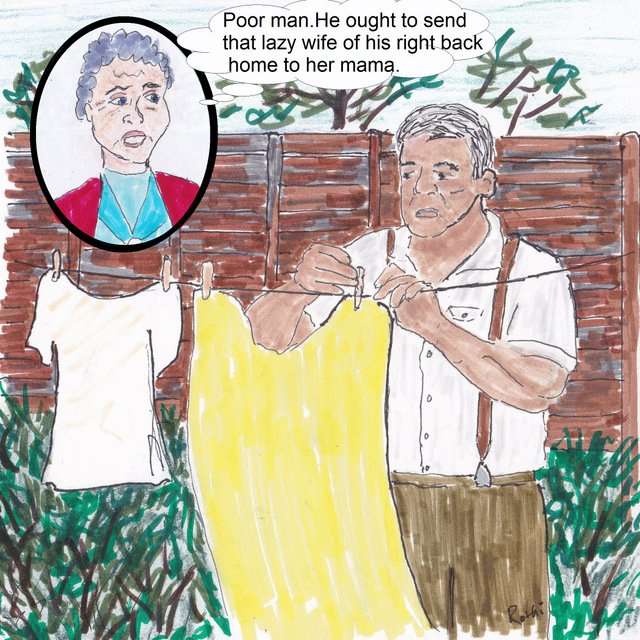 That was life on our end of the street. Past the ditch, in the six or seven houses where the Cunninghams and Garrets lived, it was different, darker, tangled in overgrown brush and grassless yards. Grandma said they were all kin to each other. Mrs. Ward said they had a tree that just had one branch. I looked for the tree, but I never saw it.

I was curious and strained to look when I walked by their houses on my way to school, but most of them were built back from the road and half-hidden by a brush-covered hill. Still, I could see enough of the tarpaper shotgun houses to tell they were real poor.

Daddy liked to joke, “I’ve been poor, but I’ve never been poor enough to have to eat Spam.” So I thought that must be it for them – they must have to live on Spam – and RC Cola.

The RC Cola notion came from Grandma. One afternoon I sat on our front steps coloring while Grandma and Mrs. Burns talked about Lorraine, “the cat,” and her boyfriends. They stopped and watched when Mrs. Cunningham walked by, headed towards Smith’s Store. She was pulling a red wagon piled with RC Cola bottles. A chubby, barefoot boy, who looked to be about five, trailed along behind.

Grandma shook her head and tsked. “There she goes. You can set your watch by Corliss Cunningham – she passes here every day, same time, with her soda-water bottles and that pitiful little young’un tagging along. 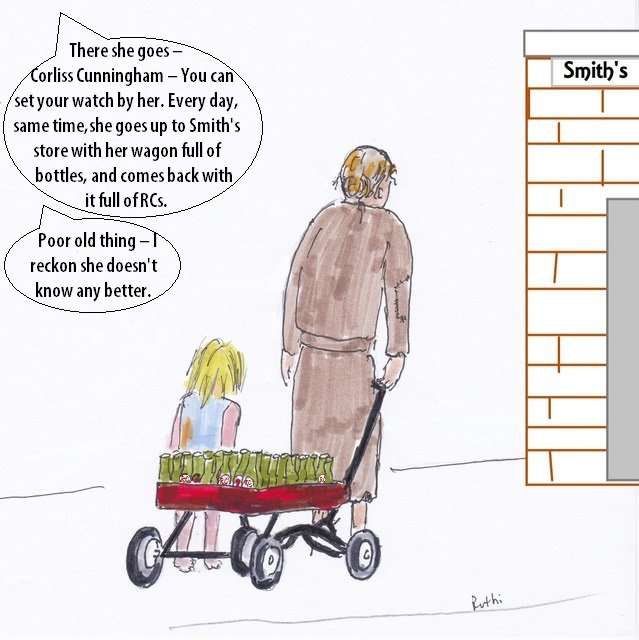 I stared. “She sure has a lot of bottles. I’ll bet she has a dollar’s worth. Where’d she find that many?”

“Honey, she didn’t find them and she’s not taking them to trade for money,” said Mrs. Burns.

Grandma said, “She goes up to the store with that wagon full of bottles, and comes back with it crammed full of RCs.”

Mrs. Burns sniffed. “I can tell you what little money she has doesn’t go for groceries. I’ve been in the store several times when she was there, and the most I’ve ever seen her buy was a sack of flour or sugar and maybe a few tin cans of something –  never any meat or milk. Poor child, being raised on hoecake and sugar water. By the time he’s ten, he’ll be sickly and weigh over a hundred pounds, and he’ll have a mouth full of teeth rotted black.”

“Poor thing, said Grandma, “She doesn’t know any better. It’s how she was raised.” She turned to me. “You remember that when you’re whining for a Coca Cola instead of milk.”

Larnie Mae, the youngest Cunningham girl, had gone to my school when I was in first grade, and I’d seen her once or twice. Then, she quit coming. Daddy said it was because she got too fat to fit in the school desks, but he might have been joking. Mrs. Cunningham wasn’t fat, but Grandma said it was because “She works herself to death taking care of those sorry menfolk.” 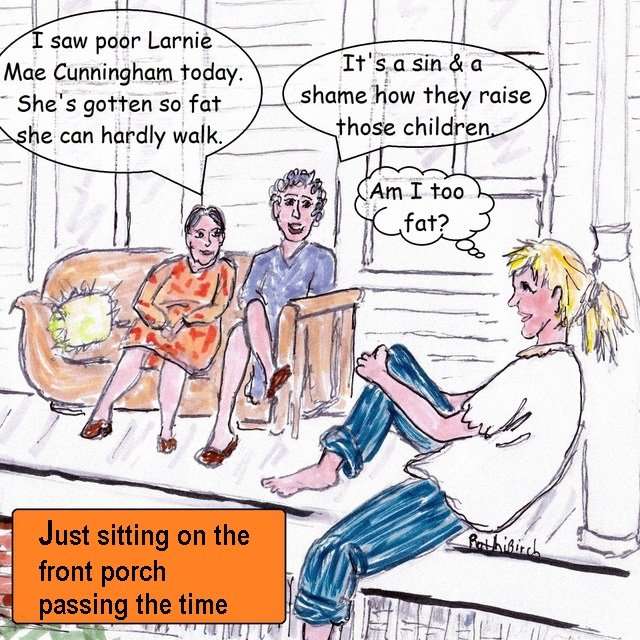 The only other Cunningham I’d ever seen was the man who lived alone in the house across the ditch from Mrs. Ward’s house. Lots of days I’d see him laying on an old mattress that sagged on a rusted iron bed on his porch, and always with a bunch of dogs on the bed with him or sleeping in the dirt around the snaggletooth steps. I always wondered about his yard. It was all dirt. Nothing grew there – no grass, not even a weed — just gray, dusty dirt.

Grandma and I visited with Mrs. Ward a lot. She lived in the first house on our side of the ditch – a pretty white house with a porch swing and a cinderblock wall in front where I practiced tightrope walking, and violets that grew wild along the ditch. One warm afternoon in October, I came home from and found Grandma there, so I stayed and picked violets. That’s why we were the first to spot the fire.

I was nine when the fire happened, but I remember. At first, there was just a flash of red-orange in Mr. Cunningham’s window. Mrs. Ward saw it and screamed, “Oh, dear Lord,” and ran to the phone. By the time she came back, big, ugly bursts of red and gold fire were rearing up from the roof, pushing up heavy black smoke that lumbered up to the sky. 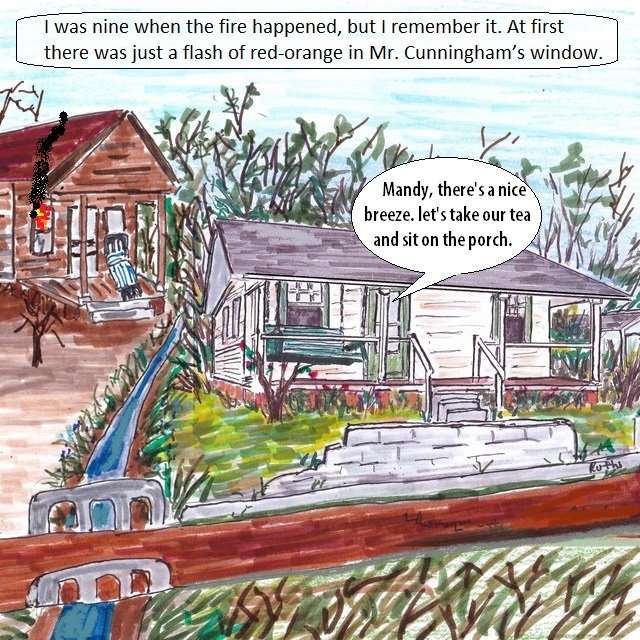 Pretty soon fire trucks and an ambulance came. The firemen sprayed water at the house and knocked the flames back enough for them to go in and bring out Mr. Cunningham, who was gray and choking. The ambulance took him away. Then they sprayed till the fire was gone.

Other folks had come to stand around and watch. Mr. Wilson came up to the porch, rubbing a handkerchief over his bald head. He said, “Whew! That fire is hot!  I’m not surprised. That wood was so dry and rotten it went up like kindling. What’s surprising is that it didn’t burn to the ground long ago, and Cunningham with it..”

The firemen were stacking bundles, wrapped in blankets, in the back of a truck.

“Are those his dogs?” I asked.

Mr. Wilson said, “Yes, it’s those skin-and-bones dogs, and it’s a crying shame. There ought to be a law against keeping animals like that.” 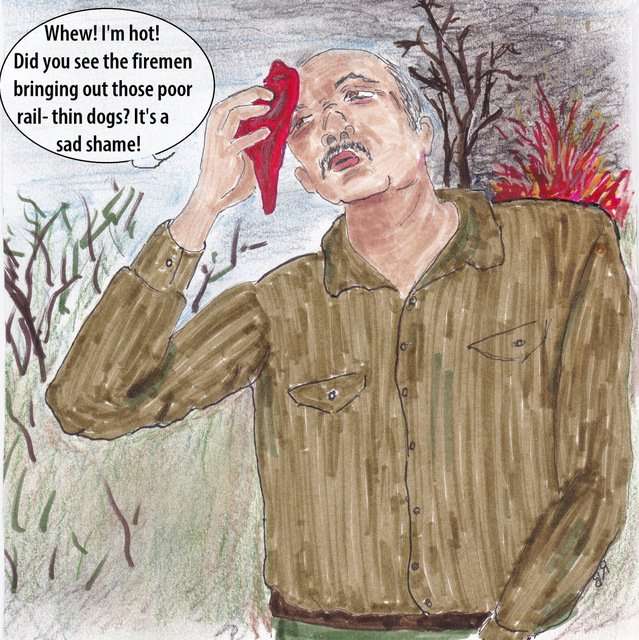 When Daddy came home from work, Grandma told him all about the fire. “It’s the worst thing I’ve seen. I heard he’s alive, but I sure don’t see how,” she said.

Daddy said, “Nah, the only way they’d have killed that man was to have the firemen hit him with the water from the firehose. Dirt’s all that’s holding him together. If they’d have washed him, he’d be a goner.” 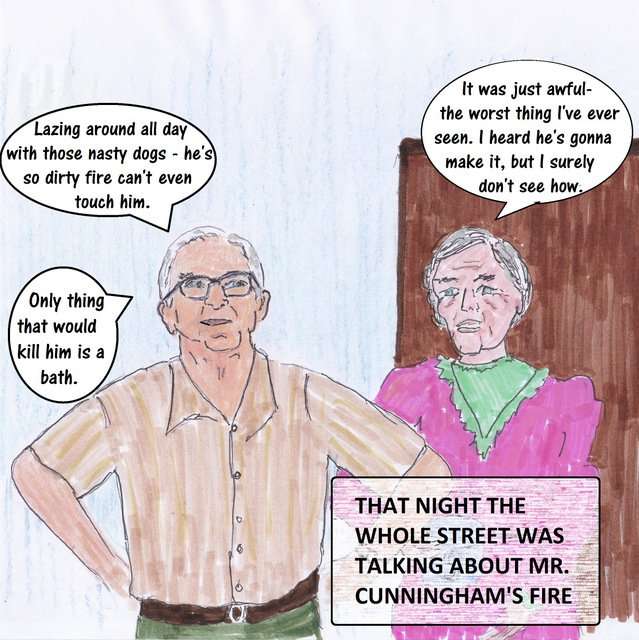 March 24, 2020
WANT MORE RUTHI?
Subscribe to my newsletter!
Get latest updates and exclusive content straight to your email inbox.
Give it a try, you can unsubscribe anytime.