What Was the Best Christmas Gift You Ever Got as a Child?

What was the favorite gift you ever got as a child – one that wowed you or influenced you?

JC: The gift of a Christmas fantasy

We lived in Honolulu until I was ten years old.  Every year, a few days before Christmas, Daddy would assemble three wooden orange crates and nail them together, then cover them with wrapping paper printed with red bricks–a fireplace in Hawaii! Unimaginable in the 40s. We three kids loved it, especially the part where we each would thumbtack our stockings right over the artificial fire he had somehow constructed. It was a gorgeous ceremony.

Christmas morning, when I was fifteen, I came downstairs to find, instead of my gift, a string of Christmas lights leading out of the living room and out the back door. In our boots and bathrobes, we trekked across the snow following the lights. They led us into the garage, where lo and behold, we found…

No. Wrong story. It was my Jet ski tied with a big red bow! It did influence me. It shaped my love of being on the water, and led to making many memories with family and friends through the years.

CD: The go-go gift that was sold out everywhere

You know how every year there’s always that one present all kids want, but quickly sells out? I don’t know how, but my folks were able to always master the market place to get that game or special toy. That’s why I was the only girl on my block to have white vinyl go-go boots. See, now you know how old I am. 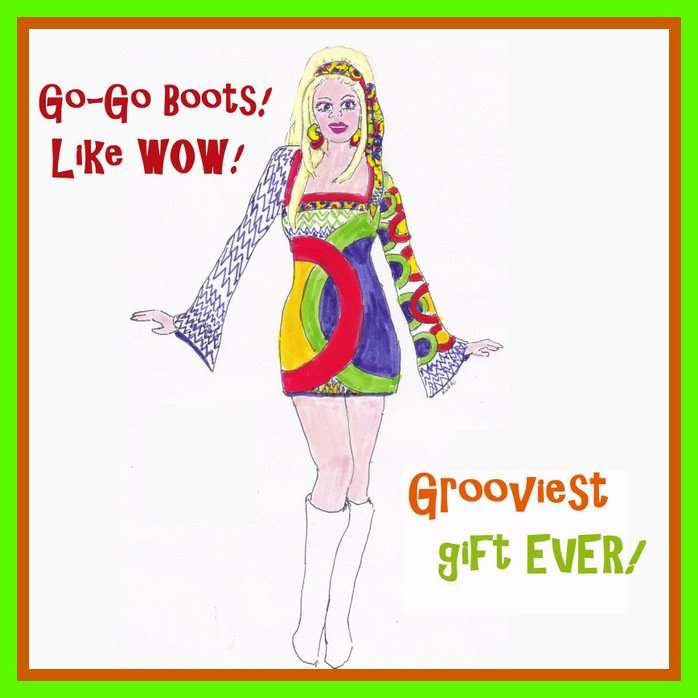 My favorite definitely was my two-wheel scooter – not the electronic kind. I was seven years old and ready to hit the ‘hood’ on my two wheels. Of course, Dad made sure I got the best bike helmet money could buy.

Picture the excitement on a girl’s face coming into the living room on Christmas morning, and seeing a ping-pong table – just what she wanted – aglow in the lights from the tree. Now, picture her face when she finds out it’s not for her – it’s for her brother.  Her gift was the piano – not on her Christmas wish list. Seven years of piano lessons later, she still wasn’t a concert pianist.

However, her not-so-favorite gift had a positive result. It gave her an advantage when she was starting her career. Before there were computers on every desk there were typewriters, and when she started out, being able to type fast and accurately was the key to getting your foot in the door of good companies. “All that time practicing the piano enabled me to learn to type faster than my competition.”

Hmmm – excellent question. I think the best gift for me was a non-gift – an empty box. It was a carton from the new fridge that my folks gifted each other. My brother Michael and I played with it for weeks, if not months. It was a fort, a hide-out, a whatever we wanted it to be. It taught me material gifts are not so important. Children’s imaginations need to be nurtured. That non-gift is the one I’ve always remembered. 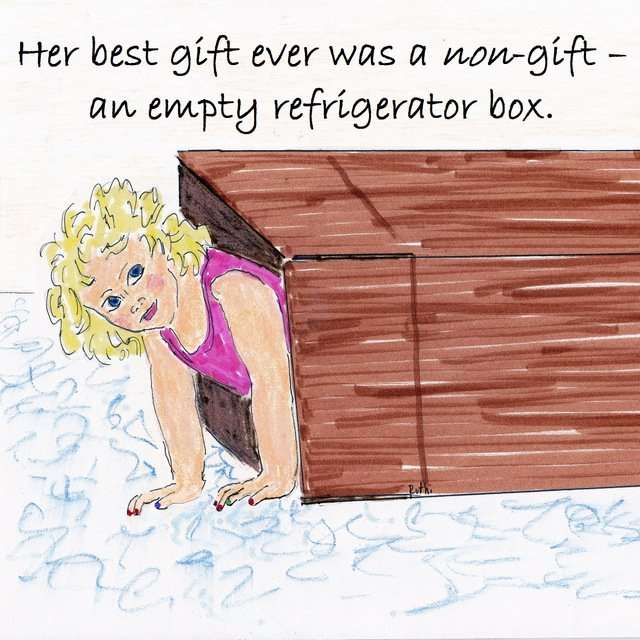 JR: The gift that saved on cuts and bruises

My life-changing, and maybe saving, gift was a blue Schwinn girls tornado bicycle. I was 6 years old and already displayed the determination I still have today. It changed my young life – and possibly saved it, because it meant I didn’t have to keep sneaking around trying to teach myself to ride my brother’s way-too-big-for-me bike with the bar I could hardly climb to straddle.

I got a lot of bumps and bruises, but I was so determined to be like the big kids on my block that I’d risk anything to teach myself how to ride.

I’m sure my mom decided she either had to get me a bike that fit – and was designed for a girl – or I’d kill myself on my brother’s.  Today, bicycles are my karmic connection to the ground and life – my passion that doesn’t give up. So, that gift was the one and only game changer of my memory.

JC: A gift made with love

There was one most special gift – a pair of blue, down-filled bedroom slippers. My husband made them, all by himself, from a mail order kit. He even taught himself how to use the sewing machine and finished them on Christmas Eve while I was at church! I still cherish my long-ago, worn-out gift.

My best – and worst – gift was a set of twelve Nancy Ann Story Book Dolls my rich aunt gave me. They were the dolls of my dreams – beautiful little bisque dolls, with sleepy eyes, soft rooted hair, and each wearing different, beautiful clothes.

Polly (put the kettle on) had brown hair and a yellow dress with red rosebuds. Little Red Riding Hood wore a red hat and cape. My favorite was, “Saturday’s Child,” who must work hard for a living. She had raven hair, wore a red and white gingham dress, trimmed with red and black ribbons and she held a little broom.

Each doll came in a pink and white polka-dot box. Mine never left their boxes.  That’s why they were the worst gift. Mama stood the open boxes on a shelf, where I could see them, but never touch them. “You’ll ruin them, then you won’t have them to look at.”

BB: A gift of music

When I was 8, I got my own Motorola record player with a few record albums, classical and jazz – AND some crisp cash, with a note to choose my own music at the record store. I still remember how very grown up I felt.

I was a piano performance major in college…. still play the piano but my classical repertoire is very rusty. I mostly play Cole Porter and smoky room jazz.

LS: A gift with influence

My father gave me yarn and a beautiful yarn basket when I was 12. It inspired me. Since I am currently waiting to hear if I have been accepted into a Masters in Arts in Museum Curation program with a focus on historical textiles, I would say that creative gifts I received through my childhood had a large influence in the person I became.

My favorite gift was a Ghostbusters gun. You put on the proton backpack, turn a handle and a foot-long foam came out to grab whatever “ectoplasm” creature was in the room. Coolest ever!

RB: A gift to draw

My favorite, and most influential, gift was a Jon Gnagy Learn to Draw kit, with real art paper, pencils, a kneaded eraser, and a book on how to draw things from a covered bridge, to a great Dane. I tried them all, but the covered bridge was my masterpiece when I was nine. I grew up and went on to a different career, then came back to drawing – cartoons for my blog using the skills I learned when I was seven. 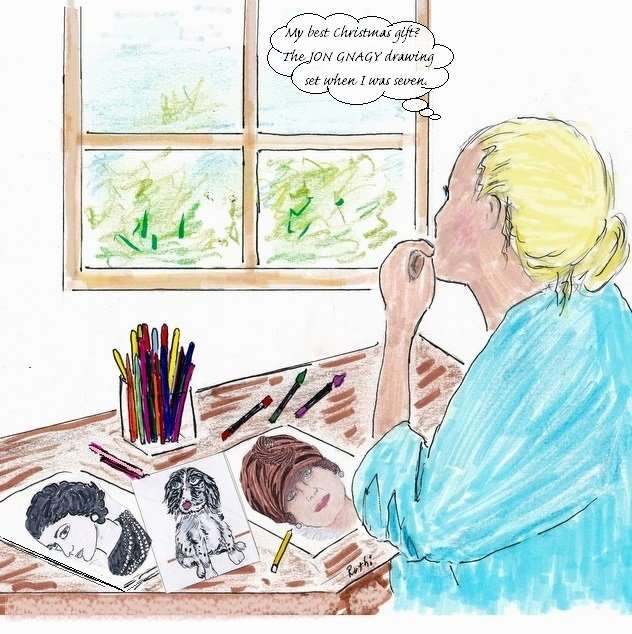 FP: A gift full of surprises

I had a huge (as tall as I was), beautifully wrapped box (actually a Scott Tissue carton) from my Aunt Kat. I opened it and there seemed to be hundreds of little wrapped presents– pencils with my name on them, a brush, comb, and mirror set, a tiny tea set, games, candy and, well, I could go on and on. I fell in love with Christmas, wrapping paper, beautiful gifts, and just waiting for Christmas morning.

What gift did you really want but never got?

RB:  Gifts that made demands

I wanted Betsy Wetsy from the first time I saw her advertised on the kids shows. She had big blue eyes – like mine – with  eyelashes and they closed when she went to sleep. But the best thing was she came with her own baby bottle and diapers, clothes, and plastic bath tub. I asked Santa for one, but Mama said NO to any toy you had to feed and clean. 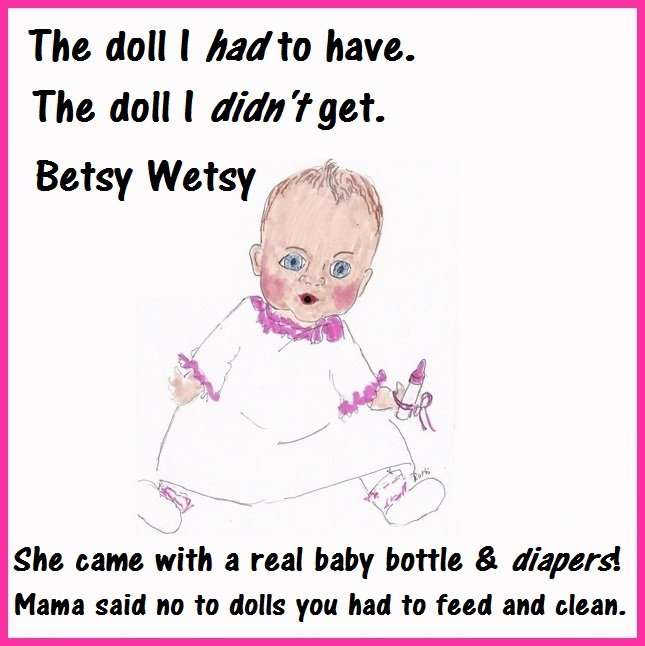 The other doll I never got was Chatty Cathy. She actually talked – you just had to pull her string. I begged for one, but Daddy said she was “just a gadget and it won’t last a week before the string breaks and it’s no good anymore.” (I wonder how many future doctors and engineers got their start by taking her apart to learn how she did it.)

What was the favorite gift you got as a child? 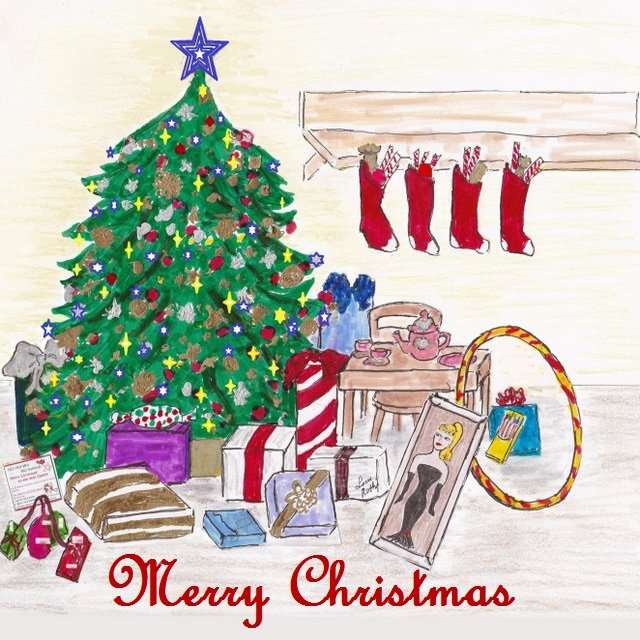 December 23, 2019
WANT MORE RUTHI?
Subscribe to my newsletter!
Get latest updates and exclusive content straight to your email inbox.
Give it a try, you can unsubscribe anytime.