What If You Could Be 16 Again – But Knowing All You Know Today?

If I could go back and be sixteen again, but knowing all I know today, would I want to? I’m not crazy about the idea of doing high school all over again. My Aunt Pauline told me high school would be the best time in my life. She was wrong. I’ve had much better times since then.

I know the first thing I’d do. I’d drop plane geometry. I wasn’t meant to use protractors or calculate the degrees in an angle. To this day, I don’t understand how the compass can still work as the pencil gets shorter. Plane geometry is a mystery, but it’s one I’ve never once in my life needed to solve.

From my first hour in the class I knew I shouldn’t be there. The teacher, Mr. Jones, spent the entire first class period explaining how to open the textbook.

“These books are new and we have to open them correctly so the spines don’t break. Now, everybody, open the front cover of your book – all the way. That’s it. Now, smooth it flat.” He looked around the room. “No, don’t bend it back. Smoooooth it.” Once he was satisfied with the smoothing, he said, “Now, do the same with the back cover. Okay. Now, turn back to the front. Open the first page, and smooth it down. Now, turn to the back … Now the front again….” 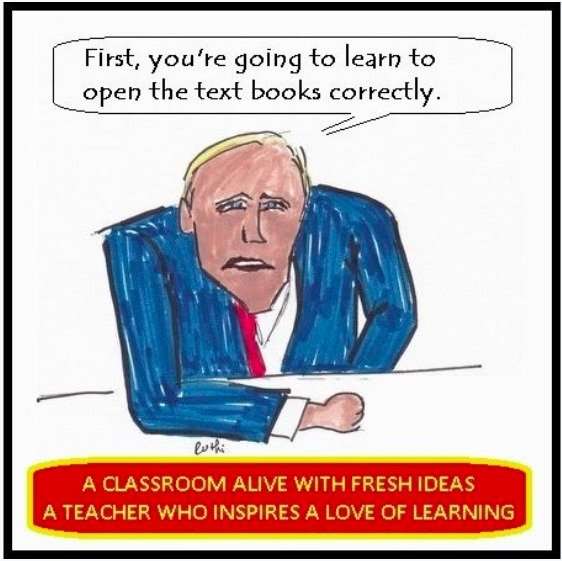 Actually, that was my best day in the class.

I’d change dating next – That is, I wouldn’t do it.  It really wasn’t much fun. Actually, spending the day doing my hair and makeup and picking out what I’d wear on the date was the best part.

I’d get over myself. High school could be very entertaining – comedy, drama, and most of its fiction. This time, I’d sit back and enjoy the show … 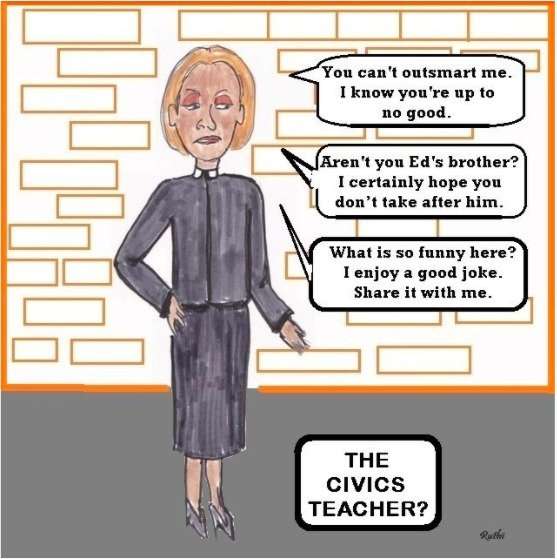 I’d dance! Because I’d know the Watusi, the jerk, the swim, and the Freddie wouldn’t last forever, I’d dance, and  I wouldn’t care who I danced with as long as I was dancing. 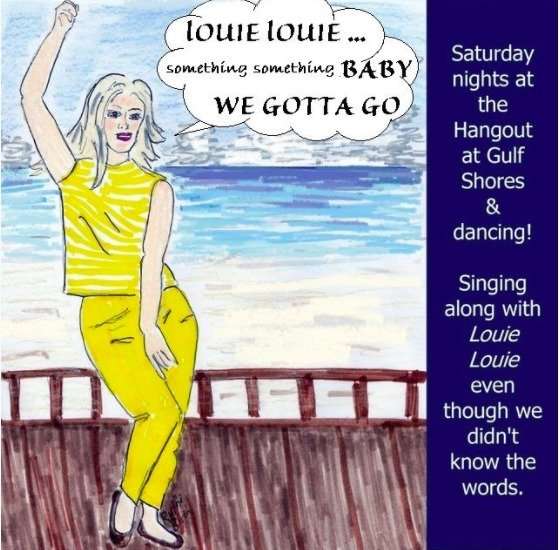 I’d go back to the hangout at Gulf Shores again – but the way it was when I was sixteen – before Gulf Shores was all high-rises and hotels. Then the only buildings in all that white sand were a couple of shell shops, a bar or two, and the Hangout, a hamburger stand with a cement dance floor and non-stop dance records by the Platters, Beach Boys, and the Mamas and Papas. I’d sing along again to Louie Louie — even though nobody ever understood the words.

I’d hang out at the A & W Root Beer stand to meet up with friends. I’d go to the teen dance at the Elks Club or the American Legion Hall. And the dance couldn’t end till they played The House of the Rising Sun. 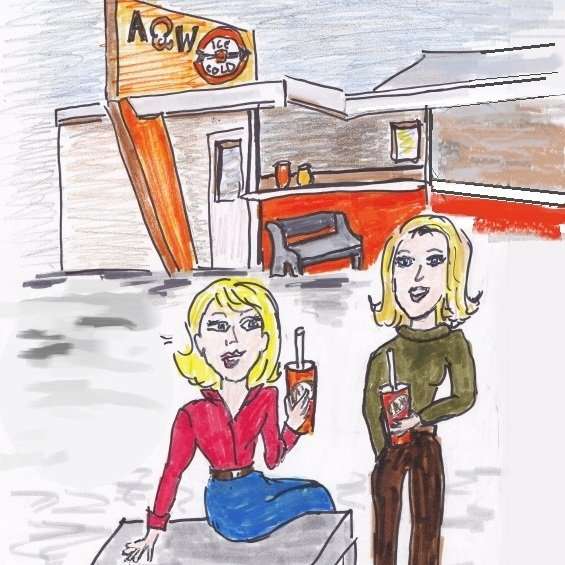 I’d save my money to buy record albums and 45s by the Animals, Kinks, Troggs, Doors, and Herman’s Hermits, and I’d spend all day Saturday in my room with my best friend, listening to records and trying different hairstyles and makeup.

I’d forget about how I looked and jump in the water. I wouldn’t lay on the sand trying to burn myself into the right shade of pretty. No matter how pasty white my legs were, I’d put on a bathing suit, go to the beach & ditch the cover-up. I’d dive in and let my makeup run and my hair get soggy– even if cute boys were around. 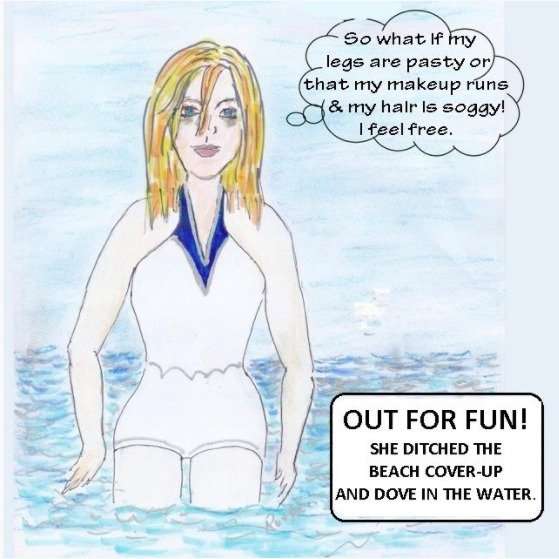 I wouldn’t be a wimp when challenged by a mean girl. I’d laugh at snarky comments.

I remember when I was 16,  one of the way-too-superior girls made a scene in the lunchroom. She pointed her finger at me and said, in a voice like grinding metal, “You went out with WL. Didn’t you?” I had, and for no reason felt guilty about it.

I didn’t know how to answer that, so I didn’t.

She came closer and snarled, “I’m dating him, so you stay away from him.”

I was okay with that. I’d already heard all WL knew about how great he was. But I knew everybody was looking at me. My face was crimson and I stammered something wimpy.

But that wouldn’t happen today. I’d walk away from her, but throw back over my shoulder, “Okay, he’s all yours, but trust me, the jokes on you.”

Some people I’d remember to avoid – Maybe you remember some of the same ones.

If I could go back and be sixteen again, but knowing all I know today, would I? Maybe for a weekend, or even a week, it might be fun.

But I like what I have right now – a brilliant husband, children who are grown and self-supporting, Mr. Magoo, my dog, a home, and a business. I sure wouldn’t like to have to start all over and build my life again. 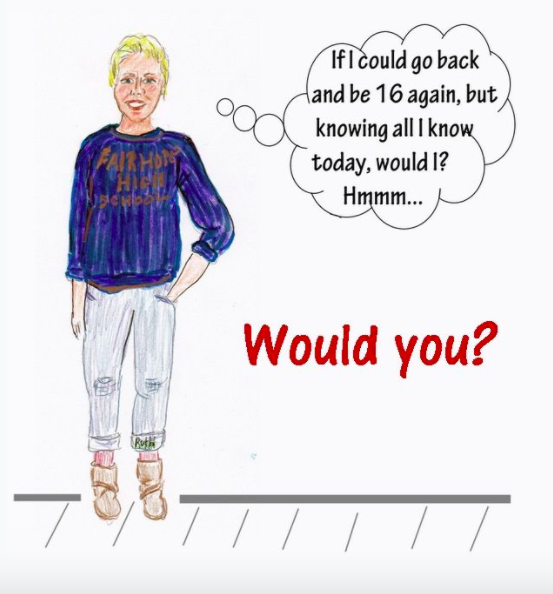 June 26, 2020
WANT MORE RUTHI?
Subscribe to my newsletter!
Get latest updates and exclusive content straight to your email inbox.
Give it a try, you can unsubscribe anytime.