Too-Close Encounters of a Weird Kind- Or Why Me?

Too-close encounter of a weird kind: an encounter with a stranger, or almost-stranger, who opens up and shares secrets — personal secrets, shocking secrets, secrets I never wanted to hear.

I used to have this kind of encounter all the time although I tried to avoid them – but that was before COVID-19. Now, I’d welcome any encounter …. SOB!

I was just out of college when I had one of my first too-close encounters. I was beginning my second week as a middle school history teacher in Georgia. That morning I’d come in early and was alone in the teachers’ lounge working on lesson plans.

Suddenly, another teacher burst in, with a loud, “Coffee!! Where’s the coffee?”

I assumed it was a rhetorical question.

She poured and took a gulp, then crooned, “Perfect!” — to the coffee, I assumed.

She took another gulp, gave a sigh, and chirped, “Hi. Just can’t function without my wake-up coffee!”

I smiled and said, “I get it,” and went back to wrestling with how to make the founding of Georgia interesting to twelve and thirteen-year-olds.

She settled on the couch with the newspaper, but a minute later she was talking again. “I’m absolutely dead this morning. My husband kept me up half the night.” I looked up to see if someone else had come in, maybe someone she knew, but no. So, I had to suppose she was talking to me — but why?

“He decided he had to make love — at three a.m.!” She sighed and giggled, then added, “You’d think having sex twice last night would have been enough for him!” She looked at me with a little wonky smile. 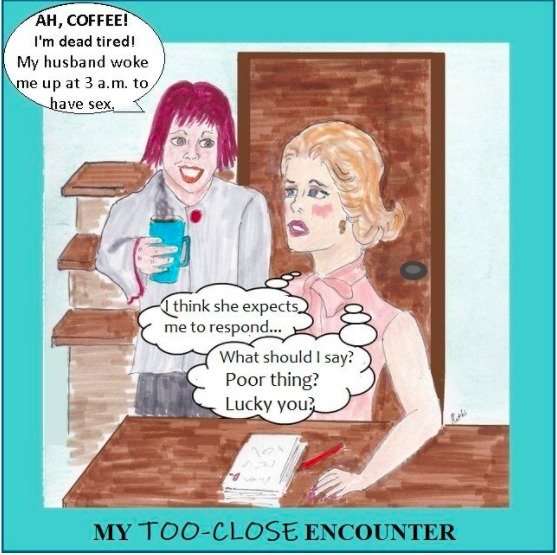 Why is she telling me about her sex life? I gave a little shrug and a half-smile that I hoped were response enough.

She was looking at me. Did she expect me to say something? Had she meant this to be a conversation starter? What could I say? Poor thing? Lucky you?

Instead, I said, “Wow,” and pointed at the clock. “It’s almost time for the bell.” Grabbing up my papers, I said, “I’d better get to my classroom. See ya.” That ended our encounter, for good, I hoped.

But I was to have another too-close encounter the very next week. That same woman with the sex-crazed husband caught me alone in the teachers’ lounge again.

Without greeting or preamble, she said, “You have to hear what my two-year-old did!”

So, she had a child (well-earned it seemed). And she thought I’d be interested? I wasn’t. I kept working, pretending I hadn’t heard her.

But she burbled on, “Listen! You’ll love this! It was the cutest thing — I wish I’d had my camera. Saturday morning I had the clean laundry piled up on my bed to fold. She climbed up in the middle of it, pulled down her diaper, and peed. It was so funny. I laughed and laughed,” she said, laughing again. 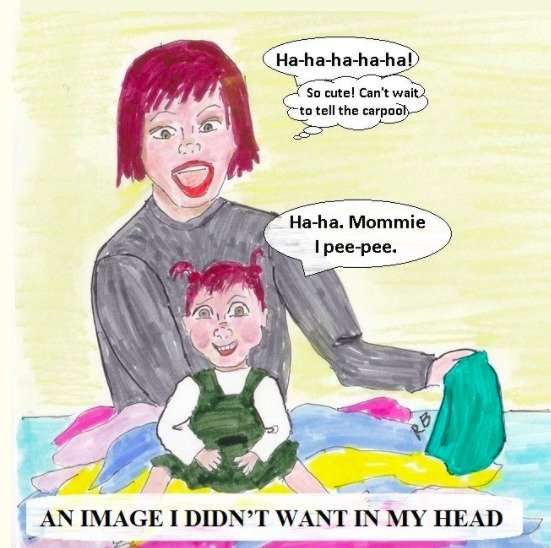 I offered a weak smile in spite of the awful image that was thrust into my mind — this woman and her crazed husband having sex on a pee-stained bed.

Our encounter was broken up when two other teachers came in, talking heatedly about a plan that threatened to thrust me into another encounter — this one of the most terrifying kind — a committee.

“Some teachers are just rude,” said the math teacher. “Look, right here, a dirty coffee cup left someone to clean up.”

The geometry teacher agreed and added her own condemnation. “Some of them never refill the paper tray on the copier. I’ll bet it’s empty right now. I going to ask Mr. Thompson to form a committee on teachers’ lounge etiquette.” 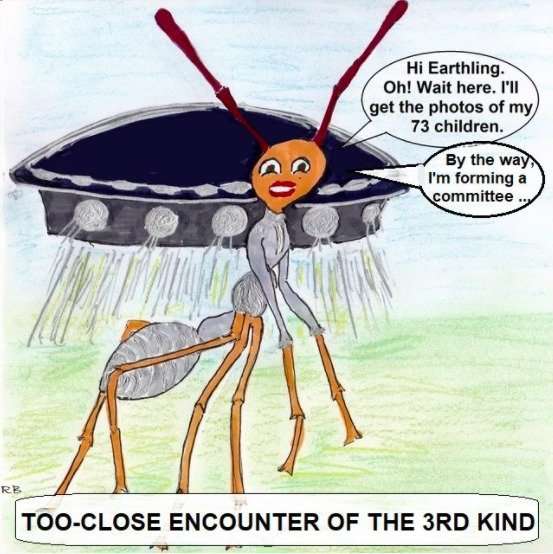 Fearing I’d be drafted, I whisked up my papers and escaped to my classroom, a valuable lesson learned — the teachers’ lounge was a place where weird encounters could happen any time. In the future, I’d do my paperwork at my desk.

Since those early too-close encounters, I’ve gone through life, shrinking away from one after another — until last March. Now, I’ve had no encounters at all for months and months and there’s little chance for one in the coming months. I used to be shocked and annoyed by them. Now I’m just lonely — SOB!

September 21, 2020
WANT MORE RUTHI?
Subscribe to my newsletter!
Get latest updates and exclusive content straight to your email inbox.
Give it a try, you can unsubscribe anytime.