I loved to listen when the grown-ups talked — especially my sharp-tongued grandmama. She used even ordinary words in unexpected ways so they painted pictures. Plus, her stories were peppered with old Southern sayings — tempests and teapots, strutting banty roosters, mad wet hens, sleeping possums, and senseless geese.

One summer afternoon Grandmama and Aunt Vivian came out to sit on the porch and “look” the turnip greens. Looking greens meant just that. Pick up one leaf at a time from the dishpans full of greens on your lap, and look it for every little worm hiding there — worms almost the same color as the greens. I decided when I grew up I’d never eat turnip greens if I had to look them.

I crept up to sit on the steps, quiet as a mouse to listen.

“That no-account Boone boy is back in town,” said Grandmama. “I saw him the other day. He was strutting up the street like a Banty rooster and sporting a pricy new suit of clothes — just like his sorry daddy used to. I reckoned he was going up to catch the bus to Mobile to find some mischief to get into.” 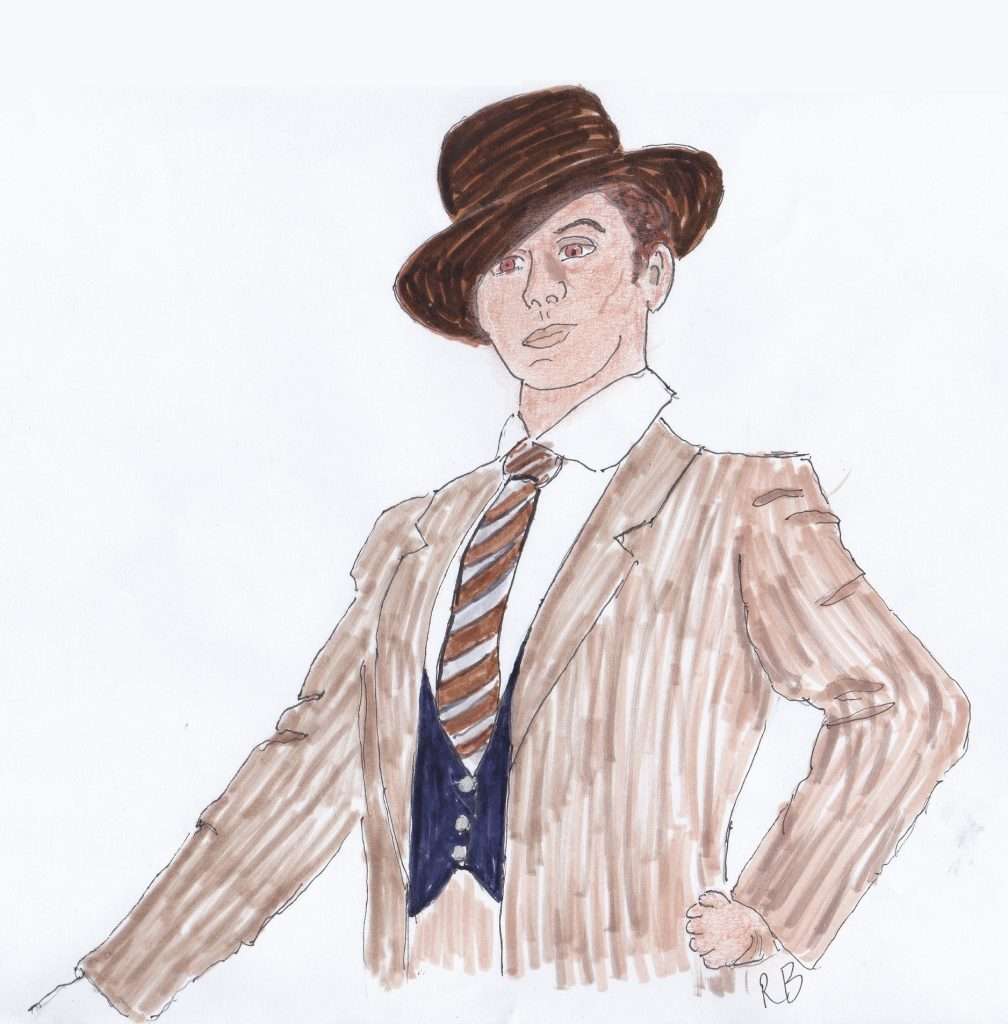 “I recollect him bragging about getting a big job down in Biloxi,” said Aunt Vivian.

“Aw, pshaw. Big job! He was talking through his hat and I never did believe it. But whatever kind of job it was, he must have gotten himself fired from it. He’s back here living off his mama.”

“Poor old Suzy, bless her heart,” said Aunt Vivian. “Since that sorry old man of hers ran off, she’s had to work her fingers to the bone. Then she gives her money to that sorry boy of hers so he can carry on like he’s somebody — while she lives on red beans and hoe bread.” 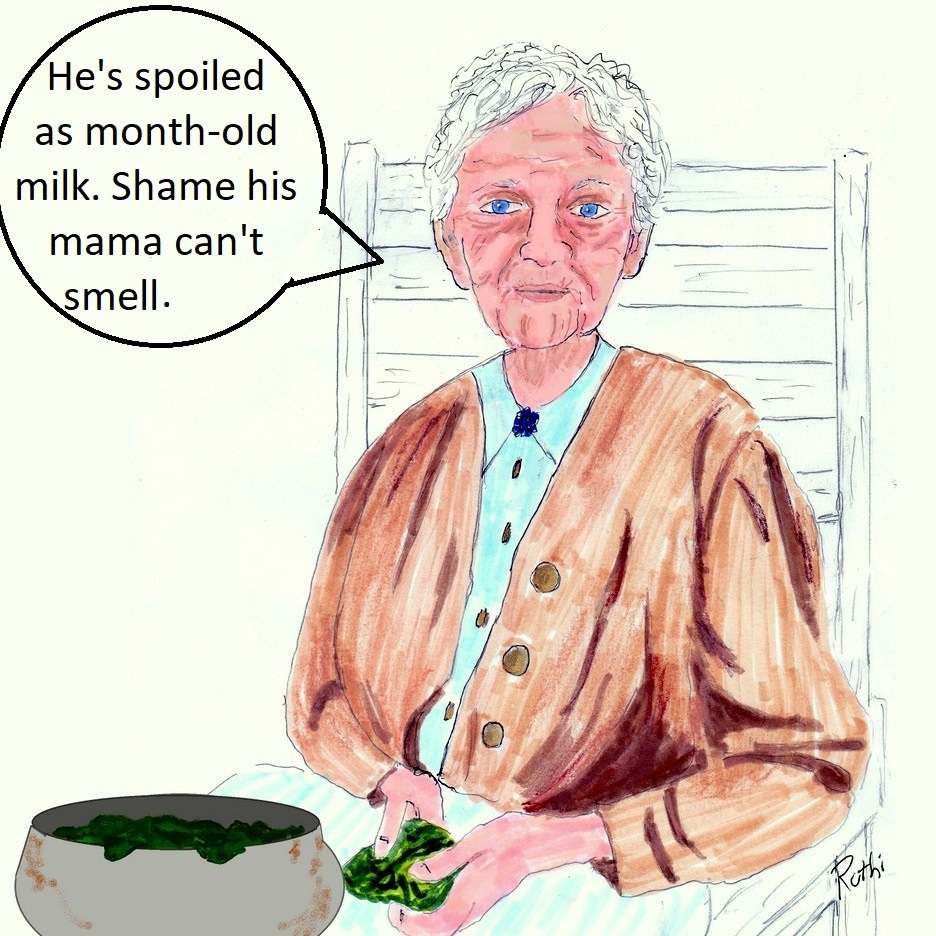 When she said that, I laughed out loud before I could stop myself. Grandmama’s head snapped around. When she saw me there, listening, she shooed me off to do chores. “You left your play pretties strewn all over the living room. Go in and pick them up.” And that was the end of stories for me that day.

Grandmama was making molasses teacakes. I sat on the stool watching her cut circles in the dough with a big water glass — so I could gobble up the dough left between the circles.

The back door swung open with a thud and my Uncle Stanley came bounding in. He looked a mess — with a dirt and grease-streaked face, oil-covered coveralls, and boots caked with thick mud. He said, “Ma, I came to see you,” and came straight at Grandmama with his arms stretched out for a hug.

“Ooooh Booger! Get away. Don’t you touch me!” snapped Grandmama, holding her hands in front of her.

He looked down at his clothes, as though he hadn’t known he was dirty. His face turned red under the grime.

“Aw, Mama, I’ve been down at Chickasabogue Creek helping Jack fix his boat. I was so close by. Aren’t you happy to see me?”

“Well, I’d be right happy if you didn’t look like who shot Lizzie. Go on home. Next time you even think about hugging me, stop what you’re doing and take a bath.”

“Alright, Mama. I’ll come on Sunday and I’ll be clean and shiny as a new penny.” He turned to go, but his muddy boot slipped on some cookie dough that had fallen on the floor. He banged his shin on the stool and yelled, “Sh%&!”

“Ooh, ooh, ooh. I sure wouldn’t hold in my hand what you just had in your mouth.”

He laughed and started out, faking a limp and laying it on thick. When he got to the door, he looked back over his shoulder to make sure Grandmama was watching.

The Neighbor Who Hated Hopscotch

Grandmama and I were sitting in the porch swing looking at her old photographs when Mrs. Andrews, our across-the-street neighbor, came out of her house carrying a bucket. She was harrumphing and stomping down the steps so hard water sloshed out of the bucket.

“Wonder what she’s lathered up about this time,” whispered Grandmama.

I knew. She was mad at Sandra and me for playing hopscotch on the sidewalk in front of her house. But we had to because there wasn’t a sidewalk on our side of the street. And the chalk would wash off in the rain — and it rained pretty much every other day. Mrs. Andrews was always getting mad and yelling at us for something. 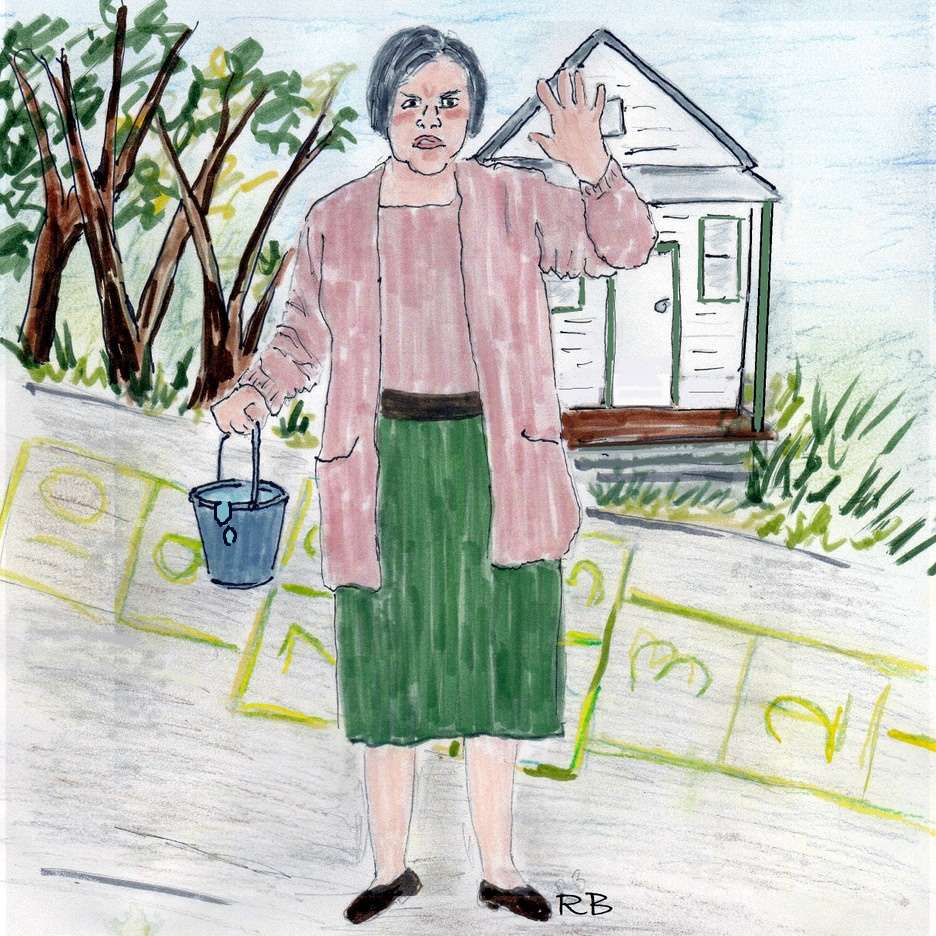 When she saw us, she called out, “Miz Simmons, I wish you’d just look at this mess. I’ve told your girl not to draw her game on my sidewalk. She never minds.”

I whispered, “It’s the city’s sidewalk — not hers.”

How Grandmama Got Her Goat – More Old Southern Sayings

Grandmama smiled at me and got a wicked twinkle in her eye. She whispered, “Never you mind. Watch me get her goat.”

“I said, your granddaughter left my sidewalk a mess.”

“How’s that? You want to give me some squash? That would be mighty nice. I like squash,” called Grandmama, holding her hand to her ear. 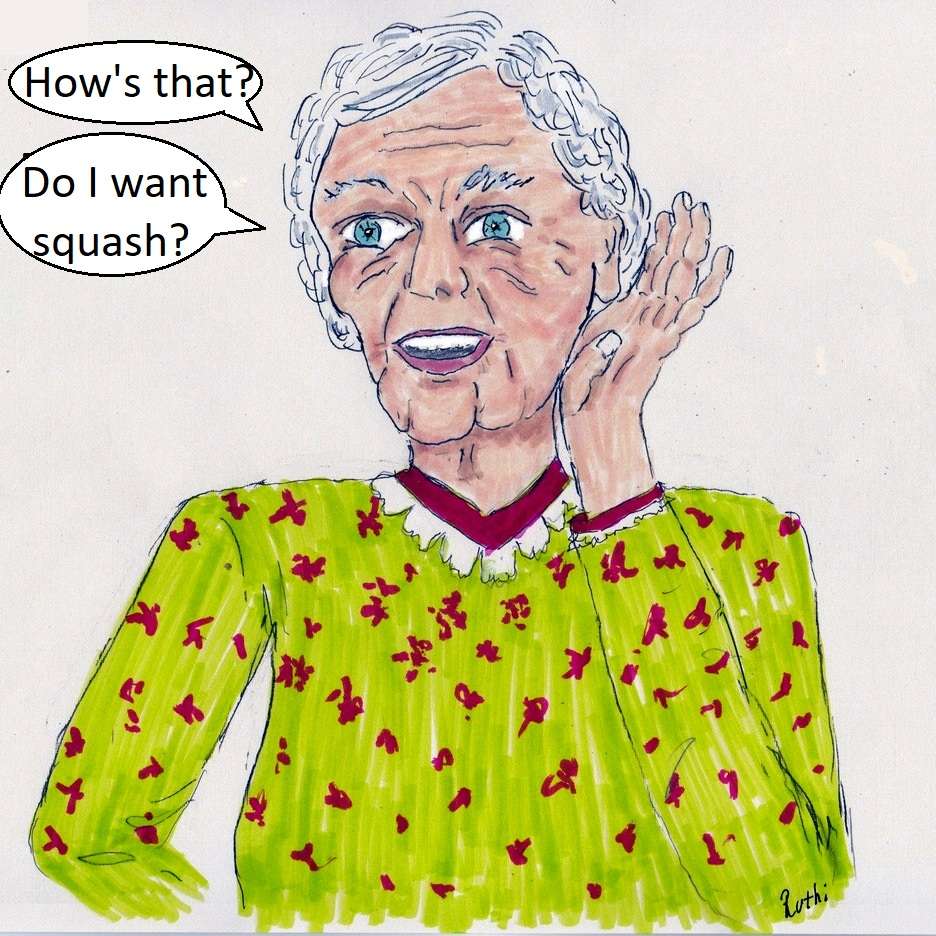 “NO! I said I’ve told your granddaughter more times than I can count not to draw on my sidewalk.”

“What say? You sleepwalk? That’s sure enough dangerous. My second cousin sleepwalked right
off the front porch — broke his ankle. He doesn’t walk right to this day.”

“No! I do not sleepwalk!” Mrs. Andrews practically screamed. “Just tell your girl to stop drawing on my walk!”

“Oh, yes. It sure is fine to have neighborly talks. We should do it more often.”

Mrs. Andrews’ face turned red as a radish. She looked like she was about to throw a hissy fit right there. But she dashed her water on the sidewalk, stomped back into her house, and slammed the door.

Grandmama chuckled. “There she goes — brewing up a tempest in a teapot.” 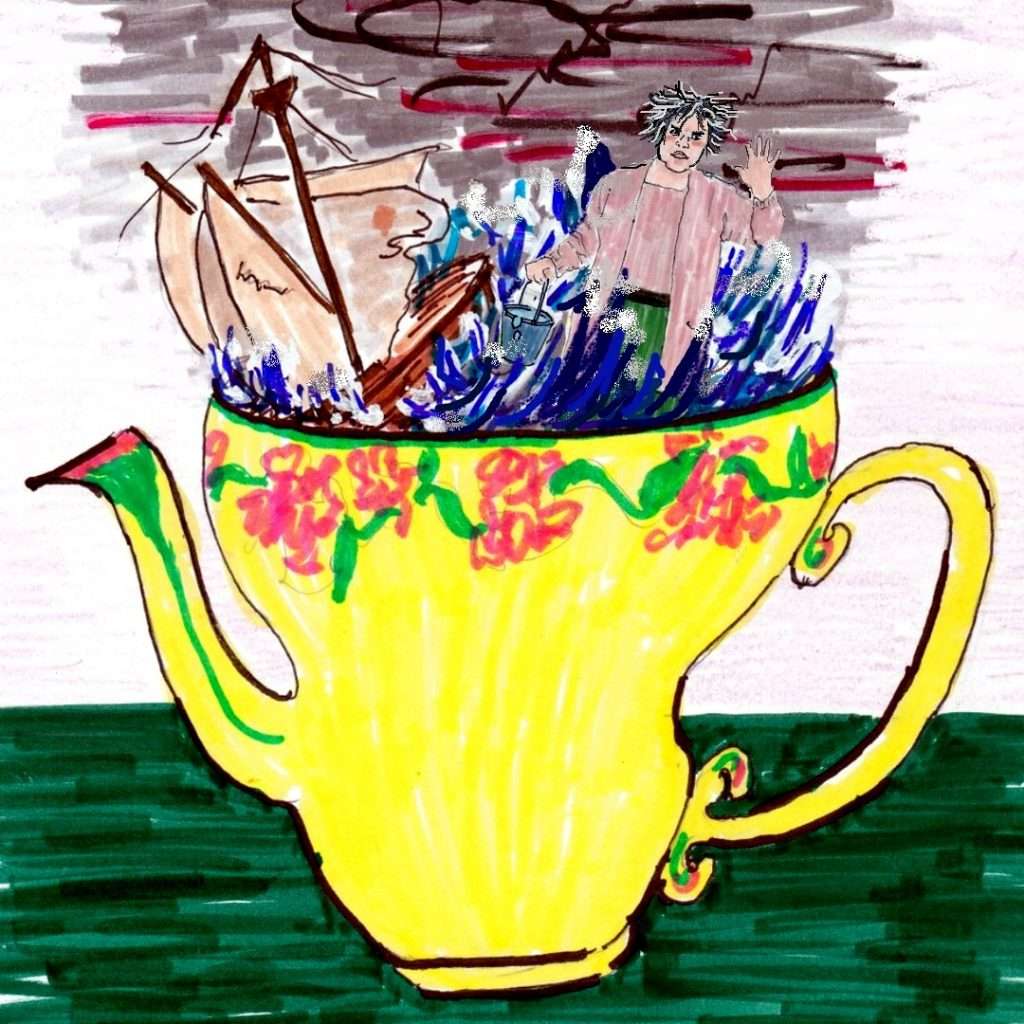 That’s all of Grandmama’s gossip and Southern sayings for today. Someday I’ll have to tell you about Daddy and the man who was, “crookeder than a barrel full of snakes and twice as slippery.” 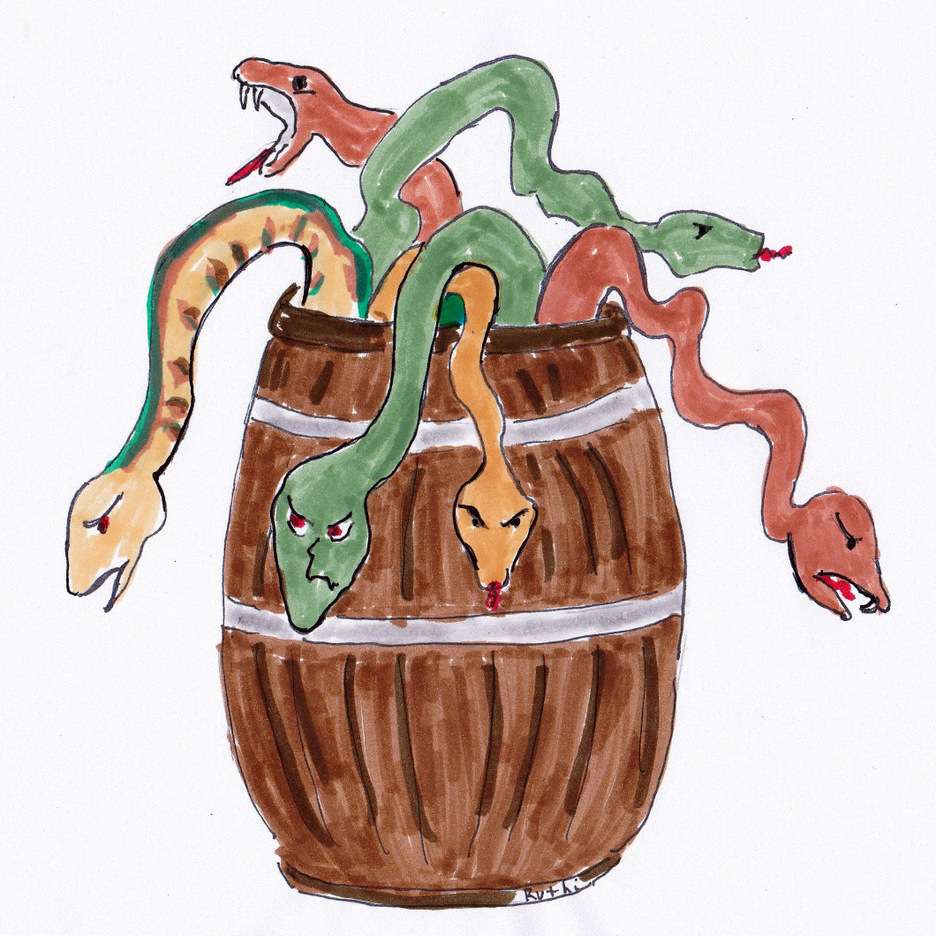 WANT MORE RUTHI?
Subscribe to my newsletter!
Get latest updates and exclusive content straight to your email inbox.
Give it a try, you can unsubscribe anytime.