Some of my best childhood memories are about singing old folksongs with Grandma and playing funny games.

When I was a kid we didn’t have iPhones, iPads, or tablets to bring games and entertainment to us wherever we were.  We had to figure out what to do when there was nothing to do — like on long, dreary car trips. 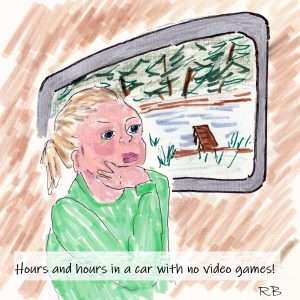 What? Hours and hours in a car with no video games?!

I remember, I was ten or eleven, and we were going on vacation. I was all excited. We were going somewhere. Somewhere was just to Chattanooga to spend a week at my brother’s house where his children would bother my things and mess up my drawings. But it was a vacation. And Daddy promised to take me to a real cave to see Ruby Falls.

GETTING STARTED BEFORE DAWN: MY CHILDHOOD MEMORIES

It wasn’t yet five o’clock in the morning when we set off down Petain Street in our old Plymouth Savoy. We started out when the sky was still black as pitch. Why? To get a head start on the South Alabama heat because our car wasn’t airconditioned.

Mama drove because she said Daddy’s driving made her nervous. Grandma and I sat in the backseat. She dozed. I wasn’t even a little bit sleepy but I lay back on the bed pillows imagining the new things I’d see. It would be at least an hour before I’d start whining that I was bored.

We were halfway across the Causeway before the orange-ball sun blasted into the black sky over Mobile Bay like it was shot from a rifle. 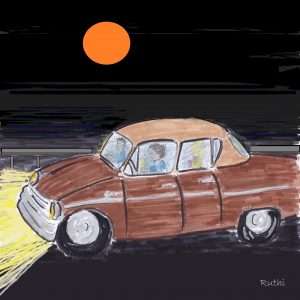 It was an awesome sight. It would jump out no bigger than a balloon. Then, as I watched it, it would get bigger and bigger, and whiter and brighter until I couldn’t look at it anymore. And it all happened in just seconds. That was it — the highlight that marked the first hour of our nine or ten-hour drive (back then the interstates were only finished in some places).

I thumbed through the coloring book. I didn’t want to color and I’d already connected all the dots and done the mazes. “When are we gonna stop? I have to go to the bathroom.” 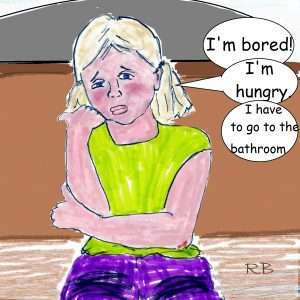 “We just left home,” Mama said. “Play with your toys.”

“I tried to play with the Colorforms but the pieces keep falling off the board.”

I jumped and pointed. “Look! There’s a place we can stop.”

“We are not stopping until we need gas,” snapped Daddy.

OH, WHERE HAVE YOU BEEN, BILLY BOY?

Daddy always said my mouth got me in trouble. It was just about to get do it again, but Grandmama stepped in. “I know what. Let’s sing.”

“I don’t want to sing it’s boring,” I whined through my pout.

Oh, where have you been, Charming Billy?

I have been to seek a wife. She’s the apple of my eye.

I tried to look bored, but by the time she got to, “apple of my eye,” I was swaying and singing. 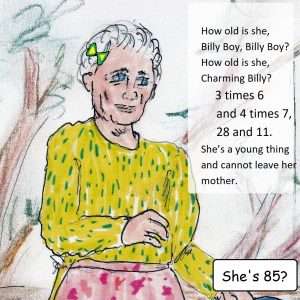 Can she make a cherry pie, Charming Billy?

She can make a cherry pie quick as a cat can wink an eye,

How old is she, Charming Billy?

Daddy turned around laughing. “That’s not so young,” he said. “She’d better hurry up and marry Billy before he

I didn’t like the interruption. I turned my attention back to Grandma. “Let’s do William A Trimbletoe.”

I clapped my hands and started chanting, 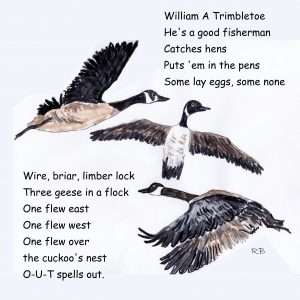 Puts ’em in the pens

Some lay eggs, some lay none

Three geese in the flock

One flew over the cuckoo’s nest

When we said, “O-U-T spells OUT,” Grandma and I both pointed at the back of Daddy’s head and laughed.

“Let’s sing another one, Grandma?”

“Let’s see … How about we sing Go Tell Aunt Betsy?”

I started with gusto and she had to catch up. 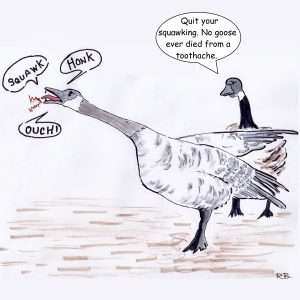 The one she’s been saving to make a feather bed.

She died a squawking with a toothache in her head

We sang it through three times and each time I played up the drama on, “She died a squawking,” till it was almost opera.

Daddy said, “That’s enough of Aunt Betsy. Ma, why don’t you sing Old Dan Tucker? I haven’t heard that in a long time.” 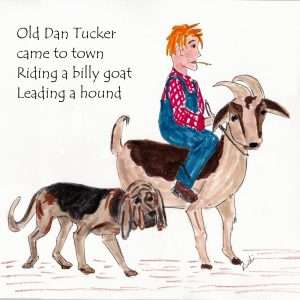 Washed his face with a fryin’ pan

Combed his hair with a wagon wheel

And died with a toothache in his heel

Get out the way, Old Dan Tucker

You’re too late to get your supper

Supper’s over and breakfast’s cookin’

The hound dog barked and the billy goat jumped

And landed old Tucker on a stump

Get out the way, Old Dan Tucker

You’re too late to get your supper

“Whew!” Grandma said when we finished. “I’m all sung out.”

JOHNNY WANTS A PAIR OF SKATES

Johnny wants a pair of skates

And that’s the best of all

“Not a bad one!” said Grandma.

Froggie went a’courtin’ and he did ride uh-huh

Froggie went a’courtin’ and he did ride 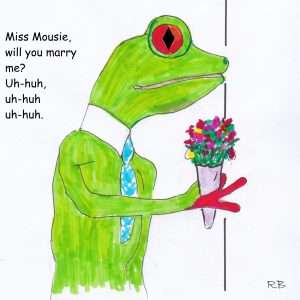 He rode right up to Miss Mousie’s door, uh-huh uh-huh

He rode right up to Miss Mousie’s door, uh-huh

He rode right up to Miss Mousie’s door

Uncle Rat laughed and shook his side uh-huh uh-huh

Uncle Rat laughed and shook his side uh-huh

Uncle Rat laughed and shook his side

The idea of a “bad one” had stuck. “Sing another one, Daddy,” I said — “a bad one.” He laughed. “No, your mama would shoot me. I’m done. You sing awhile.” I did. For the next fifty miles, I did my repertoire of hymns and spirituals. My delivery was something between a camp meeting and Broadway — Swing Low Sweet Chariot, Steal Away and Jesus Loves Me. 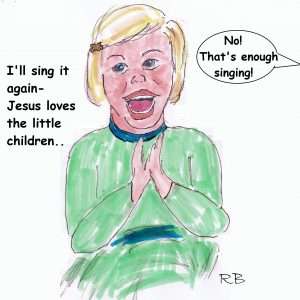 Look away beyond the blue.

For my finale, I sang — “Jesus Loves the Little Children.”

All the children of the world

Red and yellow, black and white

They are precious in His sight

Jesus loves the little children of the world

Singing old folksongs with Grandma are some of my best childhood memories. Sometimes when I’m cooking or driving I pull them from my memories and belt them out again.

Thinking back about those car trips, I wonder if Grandma wanted to come or if Mama and Daddy made her come even if she didn’t want to — just to keep from hearing nine hours of whining, “I’m bored. There’s nothing to do. When will we be there?” 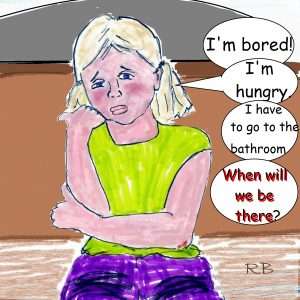 (By the way. if you Google some of these songs, you’ll find differences, like “Go tell Aunt Rhody” instead of “Betsy”. But I know Google is wrong because my grandma said so.)

March 16, 2022
WANT MORE RUTHI?
Subscribe to my newsletter!
Get latest updates and exclusive content straight to your email inbox.
Give it a try, you can unsubscribe anytime.