The Principal’s Office – From a Third Grader’s Diary 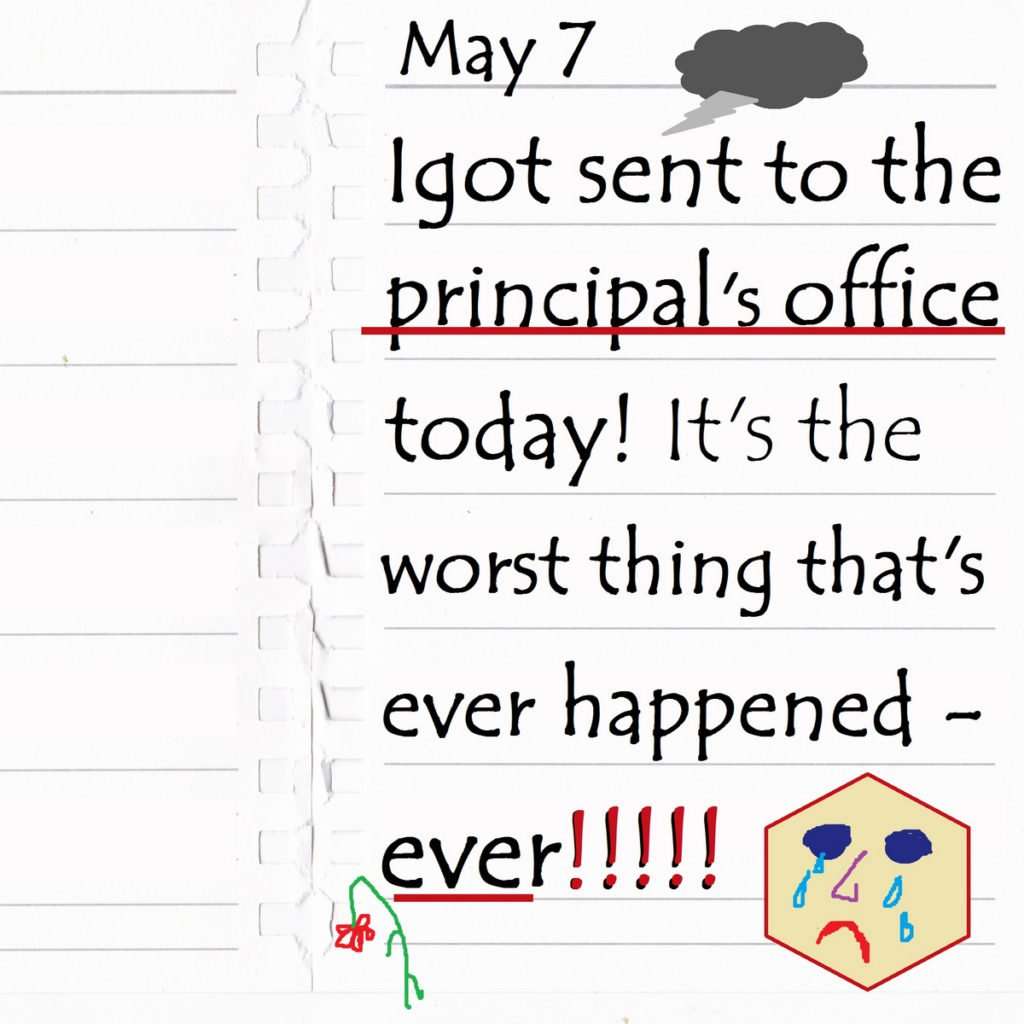 It happened right after recess.

We were doing our multiplication worksheets when the door opened. It was Mrs. Spencer, who works in the principal’s office and I knew somebody was in trouble—she only ever comes when somebody’s in trouble.

We all thought she came for Billy Honeycutt. He’s always getting in trouble. But it wasn’t Billy. 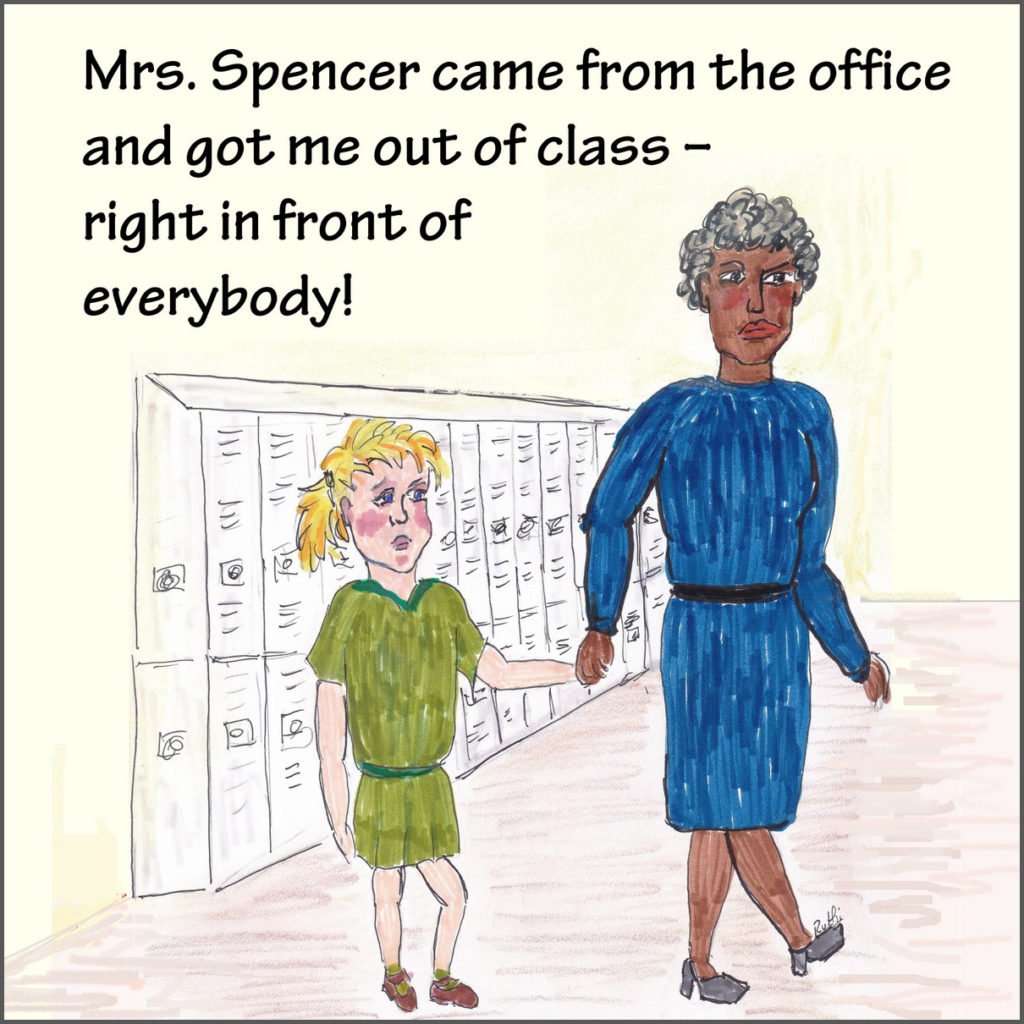 Everybody saw us and they knew I was in trouble.
I’d never been sent to the principal’s office before. None of my friends had, either.
The boys all laughed.
I cried even though I didn’t want to. 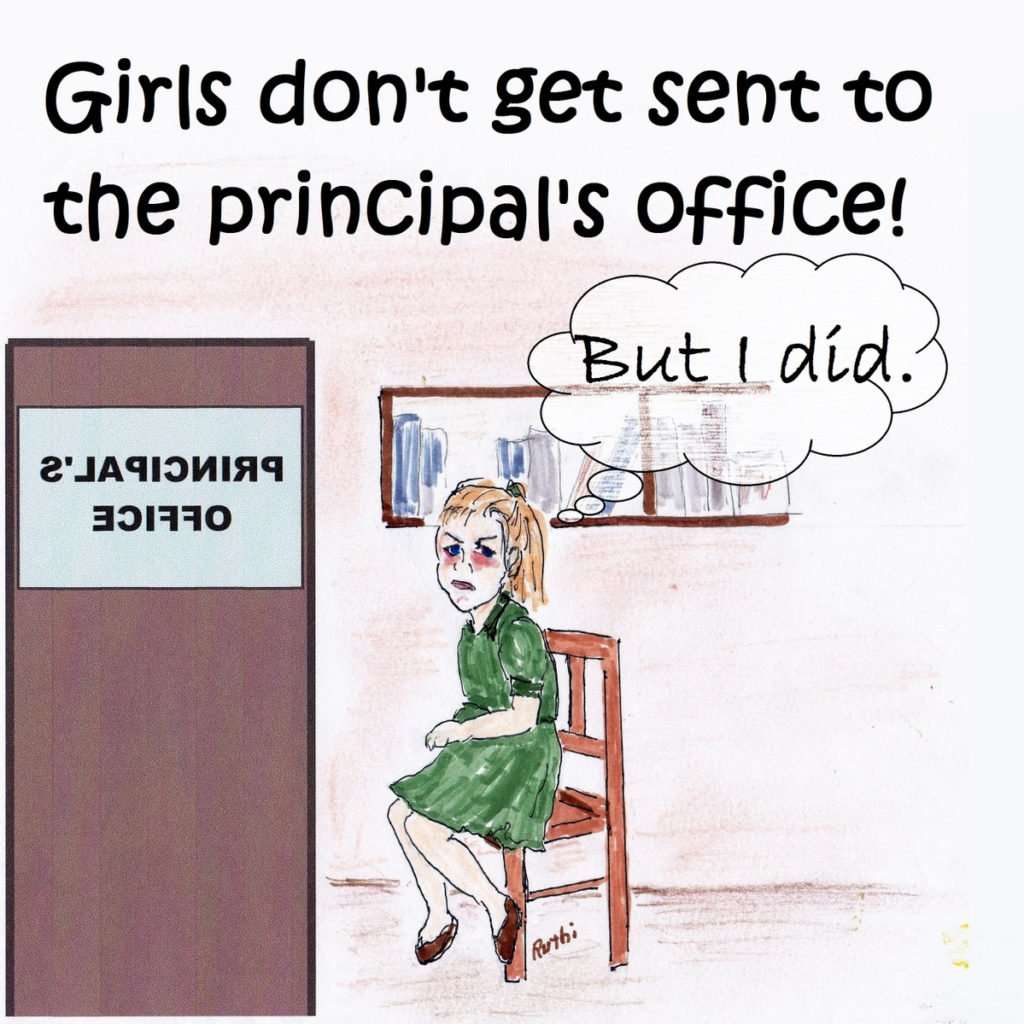 I had to sit in the main office and wait right by the door to the principal’s office—where everybody could see me! Mr. Thompson, the principal, was talking to some parents. So, I had to wait a long time, just sitting there in suspense.
Then it got worse! Billy Honeycutt came in.
He was caught sneaking out of class. Now he was in the office too, and in the very next chair! Some girls peeked in and giggled. The parents came out of Mr. Thompson’s office and saw me there–in trouble–and with Billy in the other chair. They made bad faces.

Somebody told on me! 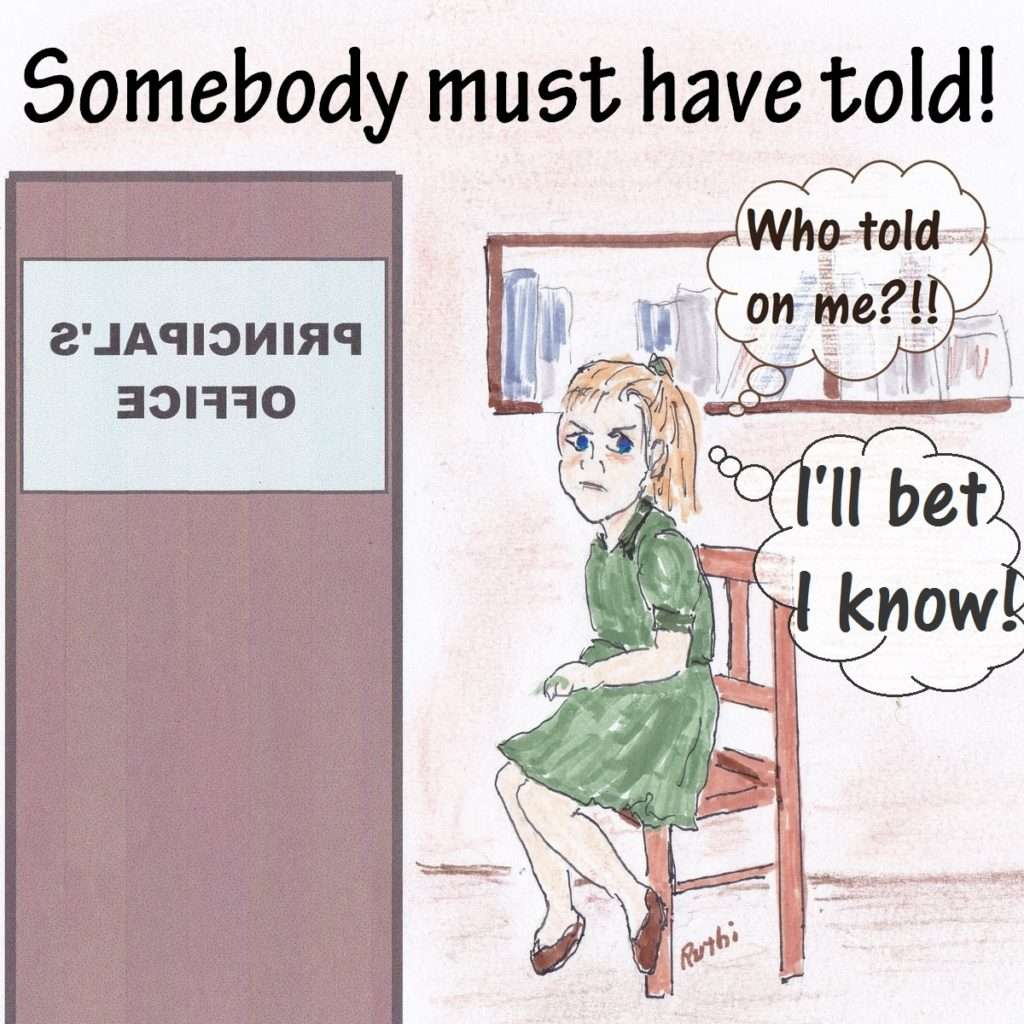 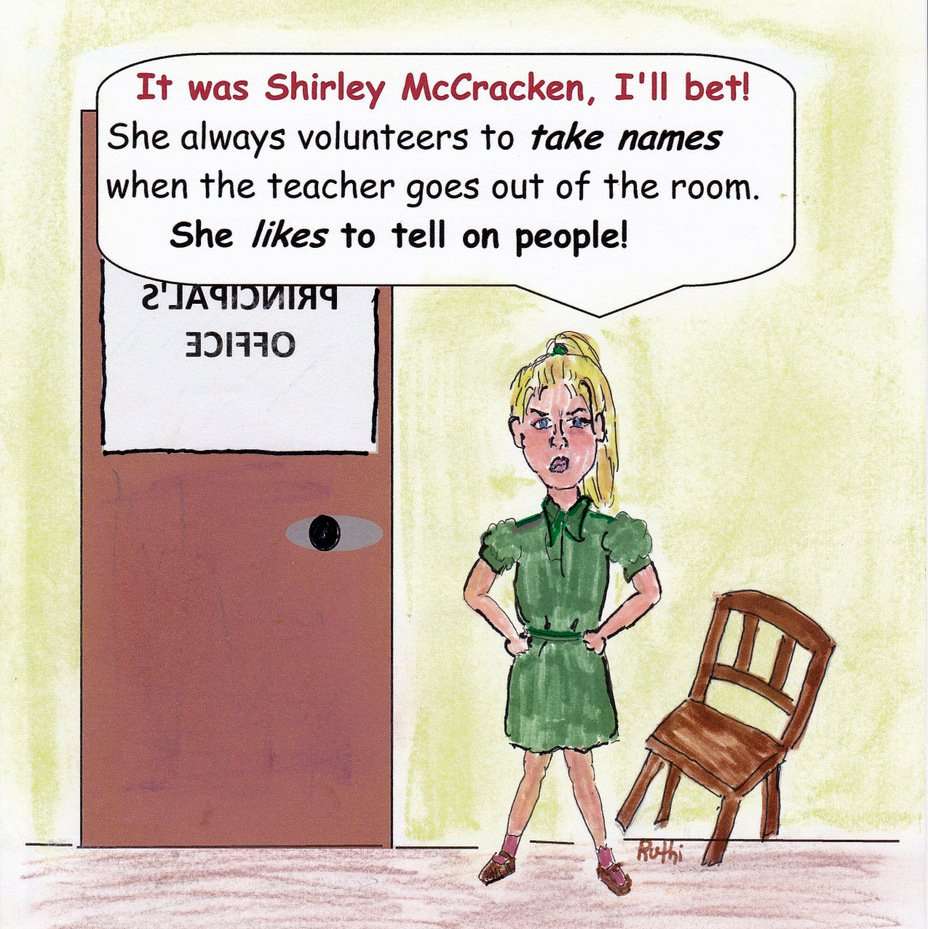 She’s so stuck up. She thinks she’s better than everybody else. She hardly ever speaks to me at all, even though she just lives two doors away and sees me practically every day.
Daddy said her whole family is stuck up! He said they act like they’re too good for the folks on Petain Street!
I think it’s because they have a brick house. Well, if they’re too good they ought to move away instead of staying here and telling on people and getting them in trouble.

Yeah. It was Shirley McCracken who told, all right. I remember! 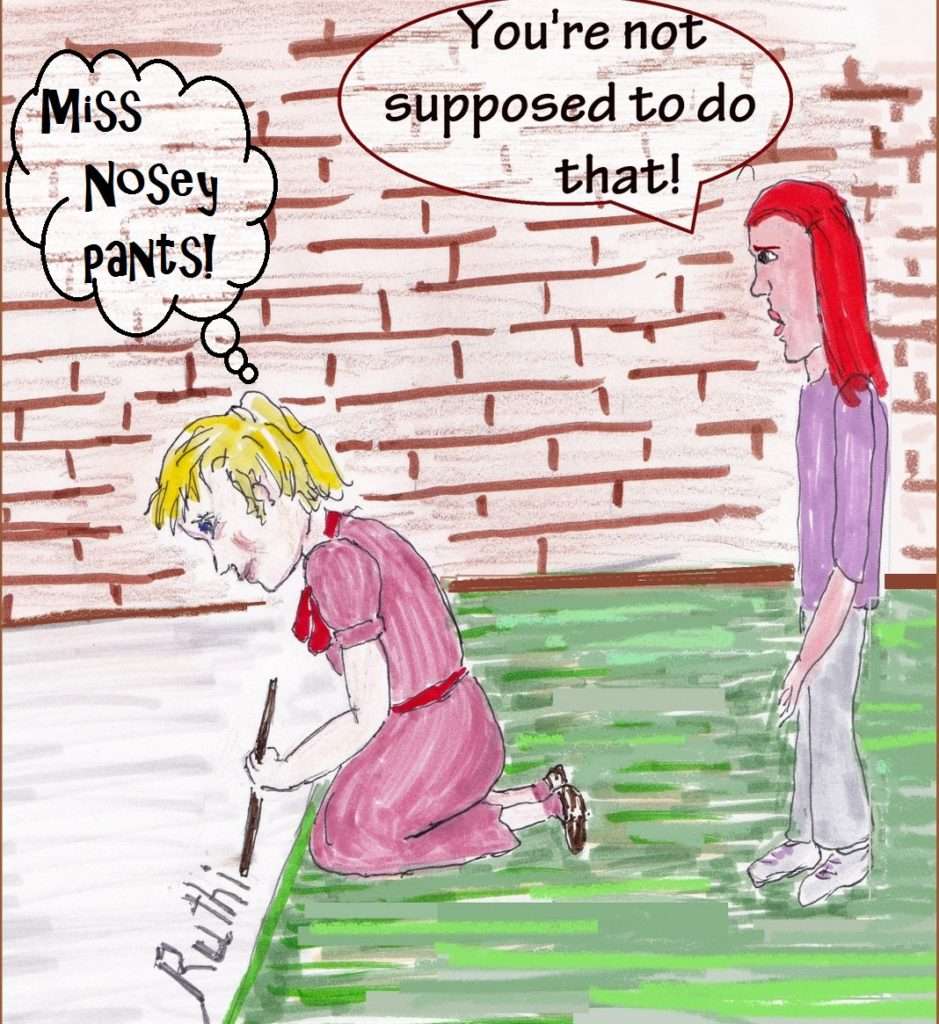 I wrote my name in the wet cement

on the new sidewalk beside the girl’s bathroom.

August 7, 2018
WANT MORE RUTHI?
Subscribe to my newsletter!
Get latest updates and exclusive content straight to your email inbox.
Give it a try, you can unsubscribe anytime.