In my memories of childhood Christmases, one stands out. I was nine years old and I was on the bus to Prichard to go Christmas shopping — all by myself for the first time. And I had a whole seven dollars to spend. I was so excited I bounced up and down in my seat — till an old lady got on and sat beside me. 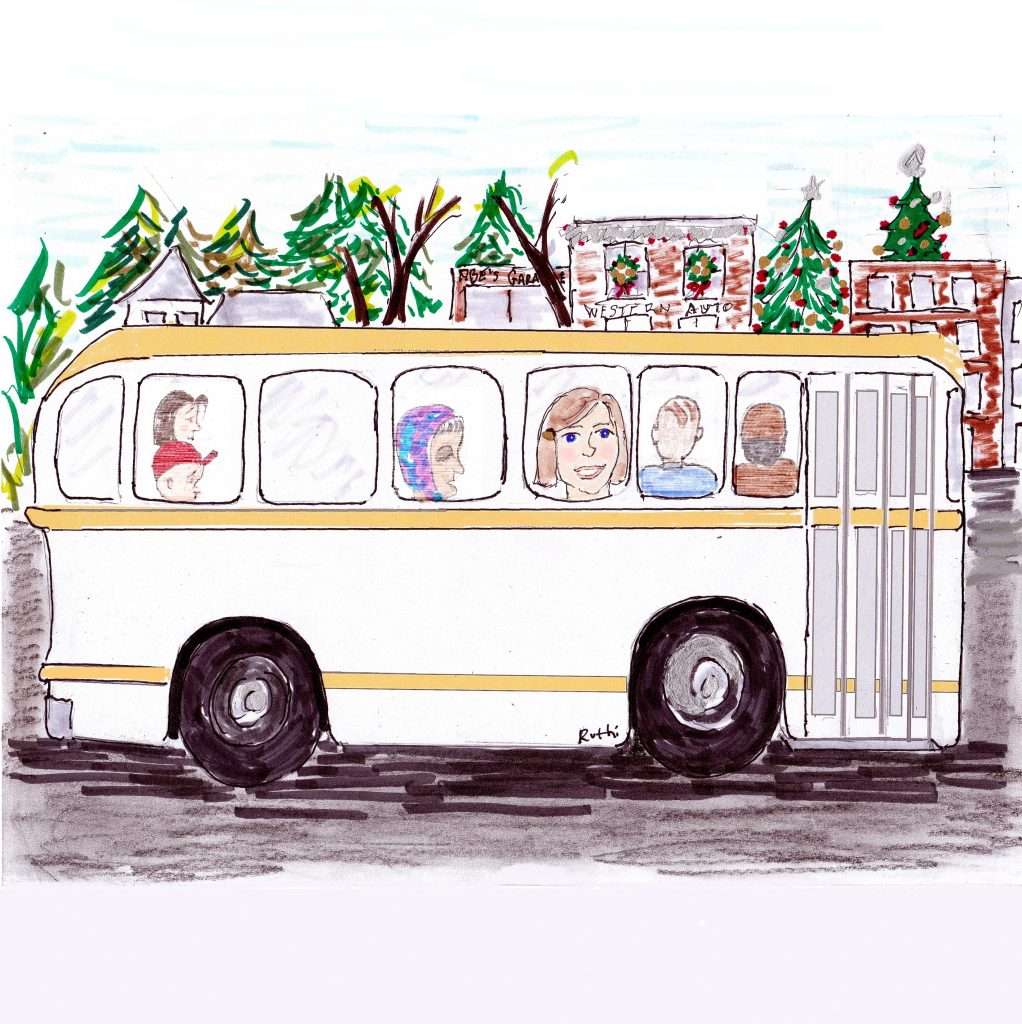 THE TOWN WAS DECKED OUT FOR CHRISTMAS

We passed the manger scene by the library fountain and entered the main street that was crisscrossed with green and red garlands. Santa Clauses waved from store windows that were filled with elves and toys. Silver stars and gold bells with red bows hung from the light poles. I felt like jumping up and down again — in spite of the old lady.

Finally, the bus stopped in front of Kress’s Five and Ten. 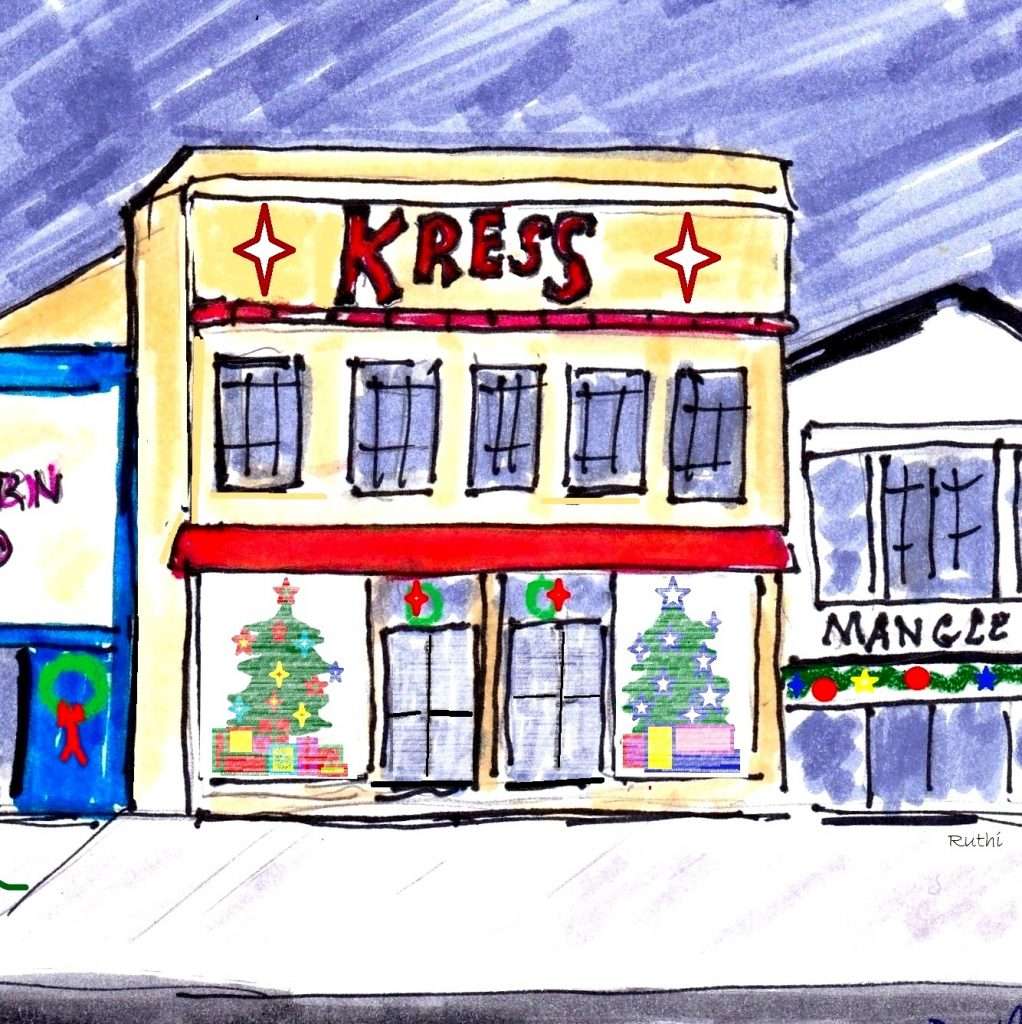 I jumped off. Kress’s was the best store in Prichard for buying presents – maybe the best in all of Mobile. It had rows and rows of counters and they were all piled high with everything anybody could want, from ashtrays to wigs. 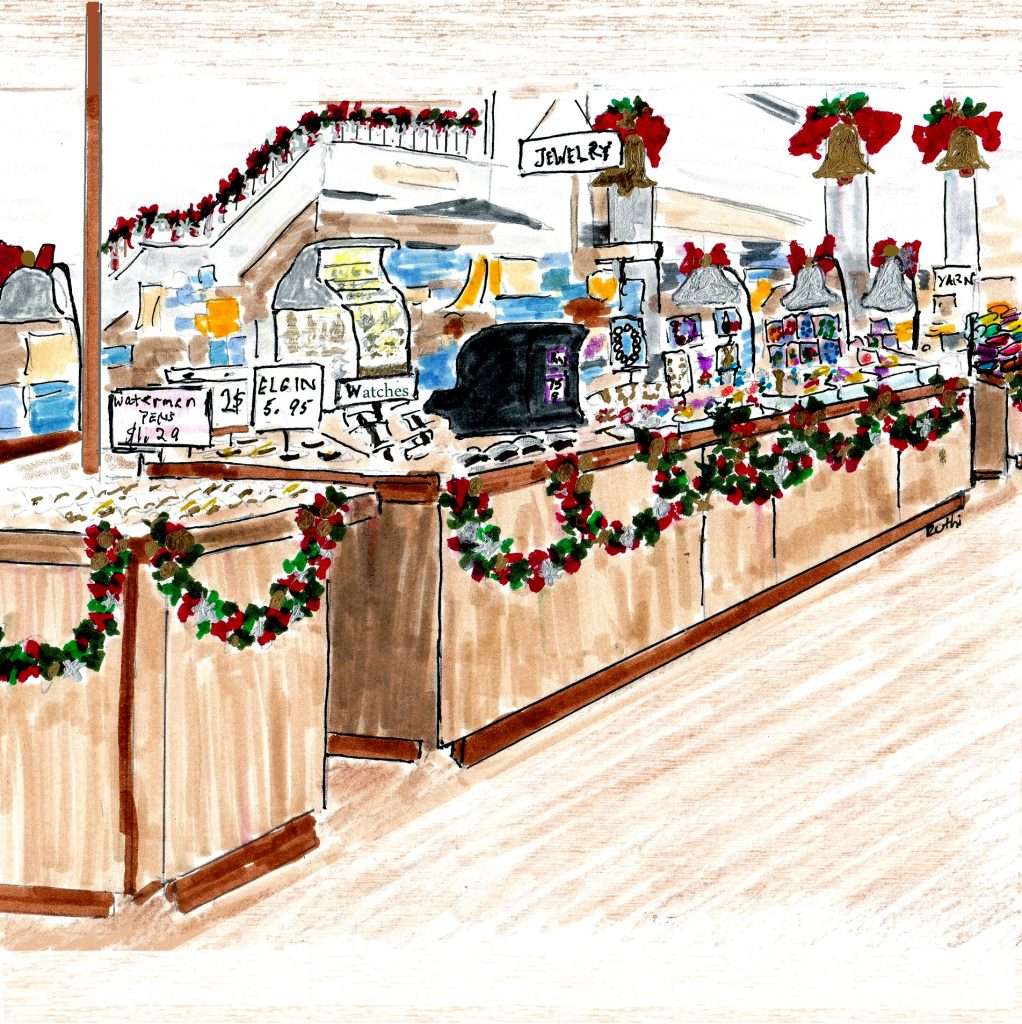 I WAS THERE ON IMPORTANT BUSINESS

I marched right past the soda fountain where Grandma had bought me my first sundae. And I only stopped for a minute to check out the dolls in Toyland.

I was there on important business. I had to find the perfect presents for Mama, Daddy, and Grandmama.

I started with Daddy. It would be the quickest because there weren’t so many things to choose from. The men’s department was just half a counter, not like the ladies’ which was almost as big as Toyland. I first picked up a pipe made of dark swirly wood. It was beautiful but it was two dollars and thirty-five cents — and Daddy only smoked cigarettes anyway.

Then, I saw something even better, a fancy silver fountain pen in a case lined with blue velvet. I was sure it would cost too much, too, but it didn’t. It was only seventy-five cents.

I was drawn to a glass case with rows of tiepins going round and round. I stared, riveted to it until I spotted one with a little silver boat on it — Daddy was a tugboat captain. It was only fifty-five cents, so I could buy the pen and the tie clip and still have nearly six dollars to buy my other gifts.

THE MOST AMAZING GIFT EVER

I was paying the saleslady when I saw IT — the most amazing gift ever — a little statue of a hobo with a red nose, bowed mouth, and black top hat. It had a hole in its stomach — but I figured that was why it only cost a dime. 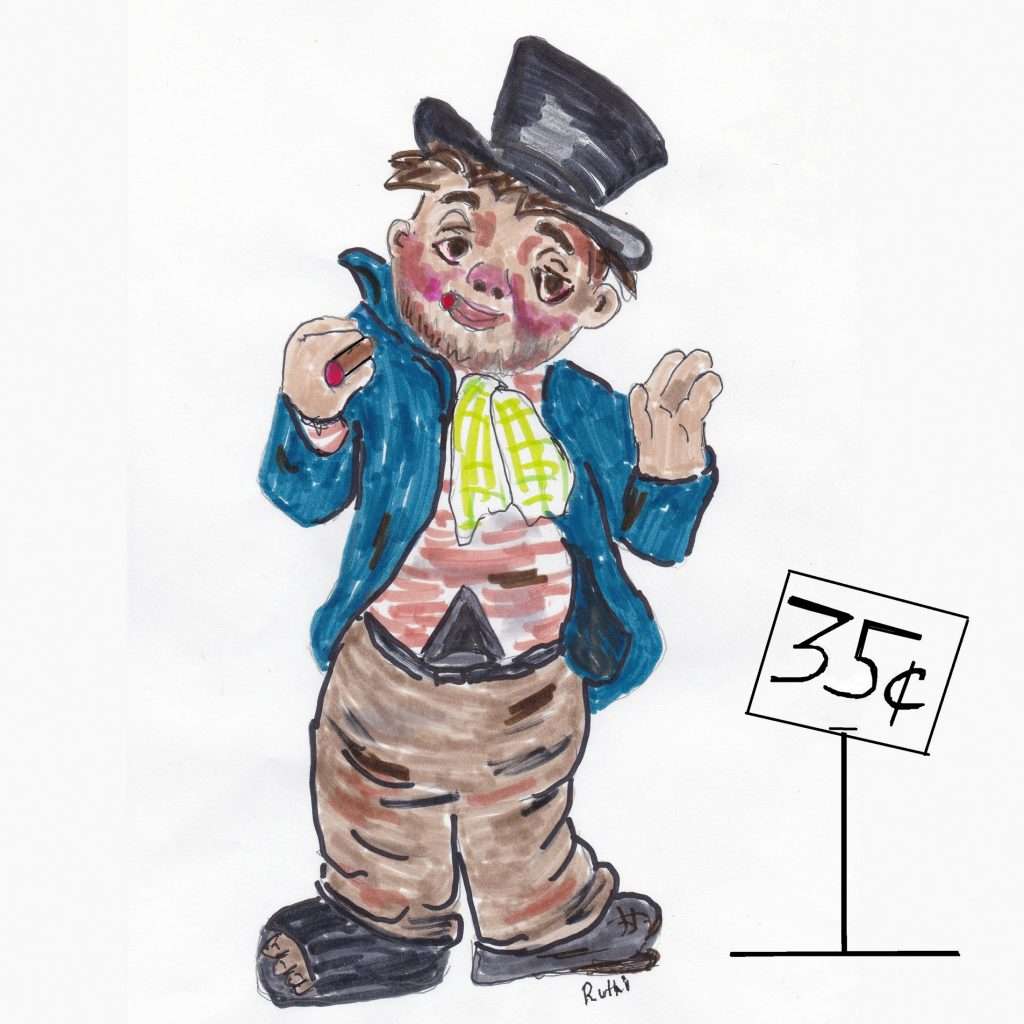 The lady laughed. ”No. The hole is on purpose. It’s an ashtray. When you put a cigarette in the hole, smoke comes out of his mouth.” I knew Daddy would love it and show it off to Uncle Stanley.

With the perfect presents for Daddy, I headed to the jewelry counter. It overflowed with beads, earrings, pins, and watches. One necklace had two long strands of big sparkly red rhinestones. I thought it was gorgeous. I asked the saleslady what she thought of it for my mama. She wrinkled her nose and shook her head. “Too showy.”

“I think she would like these better,” and she picked up a strand of pale blue beads. They looked plain to me. Then, she winked at me and snapped the necklace right in two! I must have looked scared because she laughed and put them back together. “See? They’re not broken. They’re called pop beads — brand new. Your mama can change them to fit what she’s wearing or even make a short necklace and a bracelet to match.” 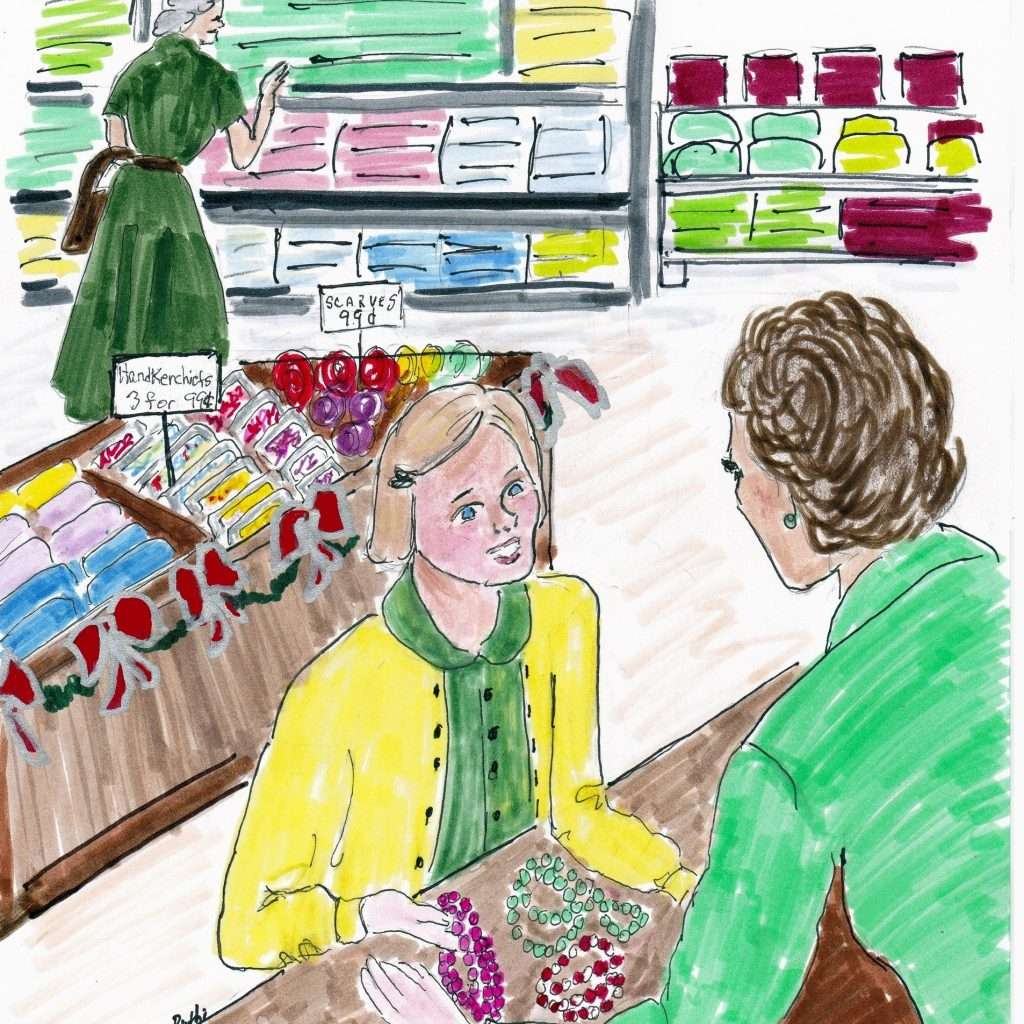 Pop beads! Mama would love them. I bought a set in three different shades of pink, and I had two dollars and twelve cents left for Grandma.

I found a little red-crystal rose pin on a green stem pin. She would like that. And I got a box of the Lilac Talcum Powder she used.

My shopping was done and I still had enough money for a coke-float and bus fare. The bus wouldn’t come for twenty minutes, so I ambled around the store. Way in the back, behind the dishes, I saw something that gave me an idea. It was a big display of wax flowers and vases – real crystal, I thought. And they were just ten cents each. I thought of Mrs. Gates, an old lady on our street who was sweet to me. She lived alone. I bet she didn’t get any presents for Christmas.  She didn’t even have a Christmas tree. 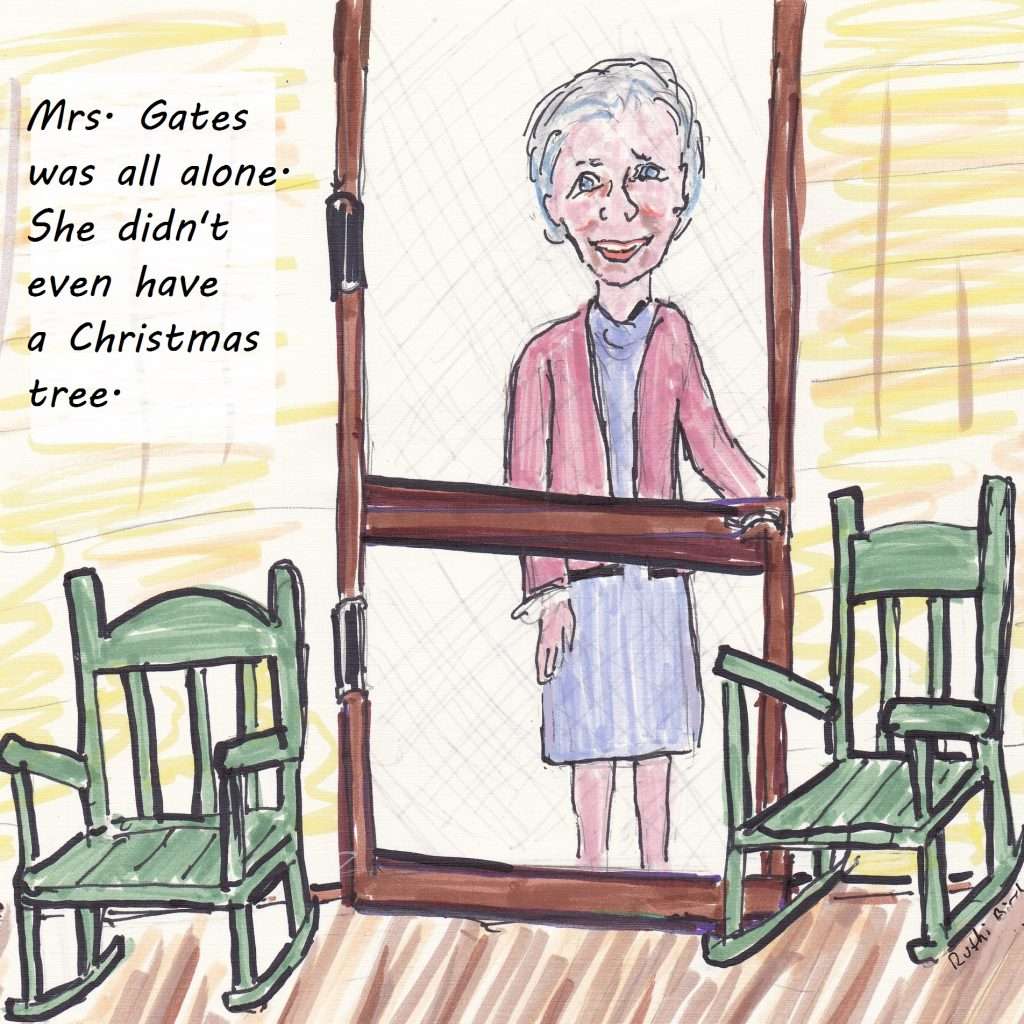 WOULDN’T SHE BE SURPRISED?

Wouldn’t she be surprised if I took her a present? And I had just enough money for the vase and three red roses. I didn’t need the coke float and I didn’t live too far away to walk.

But I didn’t walk home. I ran and skipped all the way. When I got home. I took Mama’s wrapping paper and tape to my room spread the gifts out on my bed and set about wrapping.

PRESENT WRAPPING LOOKED EASY WHEN MAMA DID IT

Present-wrapping was harder than I’d thought. I could see in my head what I wanted something to look like but I couldn’t make it happen. The boxes ended up patched and taped and tied with droopy ribbons. I looked at them. They were awful. I ripped off the paper in a fit of crying.

Finally, I blew my nose and started over. It took a few tries but at last, the boxes were done and with only a few patched places. I covered the patch on Mama’s beads with a funny note. “Dear Mama. If you break them, they aren’t broken — Joke!”

But the hobo! No matter what I did, he was still a lumpy, lopsided, blob, held together by a half-roll of tape. I sat him between the boxes with the pen and tie clip. They didn’t go together at all. I decided the only thing to do was tie them together with a note. I made a card from the cardboard that came inside Daddy’s new shirt and tied the three gifts to it with red and green ribbon. It looked funny. Daddy would laugh.

Christmas morning, I was awake hours before I could wake up Mama and Daddy without getting in trouble. Finally, six-thirty. Late enough, I decided. I ran to their room without peeking into the living room to see what Santa had brought for me. “It’s Christmas! Wake up! Santa Claus came. Come on!” I ran to get Grandma.

Finally, we went in. The lights from the Christmas tree showered the presents with color. Candy canes and boxes of chocolate-covered cherries stuck out of the stuffed stockings that hung on the mantle. I thought our living room was even more beautiful than the window of Gayfers department store in Mobile.

Nobody knew how to make Christmas like my Mama! 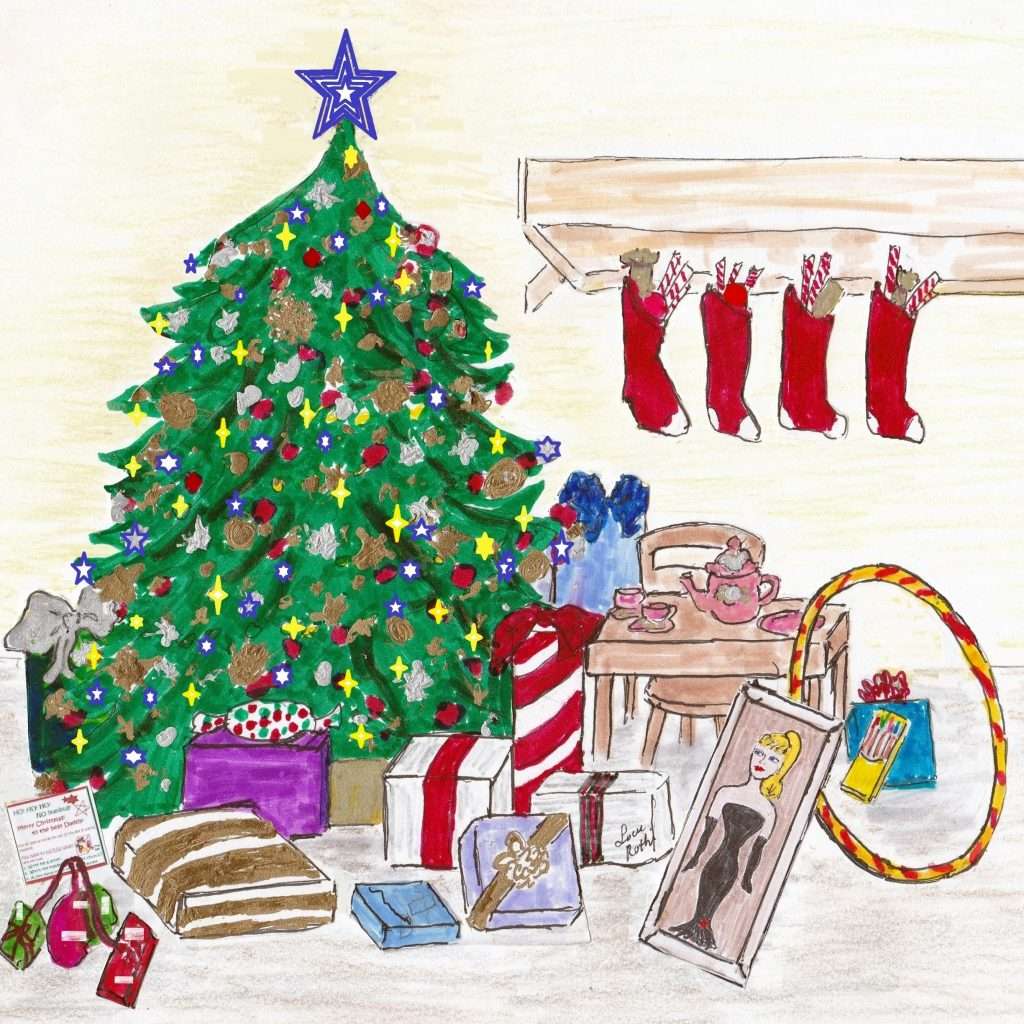 While Mama made coffee and hot chocolate, I sat on the floor inspecting the toys from Santa, a Barbie doll in a black evening gown,  a real china tea set, a game, a hula hoop, a coloring book, and the biggest box of Crayola crayons.

Then it was time to open presents. I jumped up. “Open mine first! Here, Grandma. You go first.”

Grandma opened the pin. “Oh, my, my, my,” she said – she always said that. “Isn’t this the prettiest thing!” And she pinned it on her nightgown.

“Mama, here. Open yours.” When she saw the beads and the note, she grinned her crooked grin. “Pop beads — Mrs. Reeves was showing hers off on Sunday. I was hoping I’d get some. Now I have.”

I picked up the card holding Daddy’s gifts. They dangled like a broken puppet from the paper that bent and tore. “I couldn’t get it to look the way I wanted,” I said.

“It looks fine,” he said, and read the card and laughed. Then, he opened the pen. “I’ll write real fancy with this.” Next, he opened the tie clip and pinned it to his shirt. “Stanley’s going to be jealous of this.”

WHAT’S THIS? A BOWL OF GOLDFISH?

Finally, he held up the hobo. “Now, what’s this funny thing? Let me guess. It’s a bowl of goldfish.” I giggled and shook my head.

“A turtle? No? Then it must be soup bones.” By then we were all laughing. “No? Not soup bones either? Then I don’t know. I’d better just open it.” 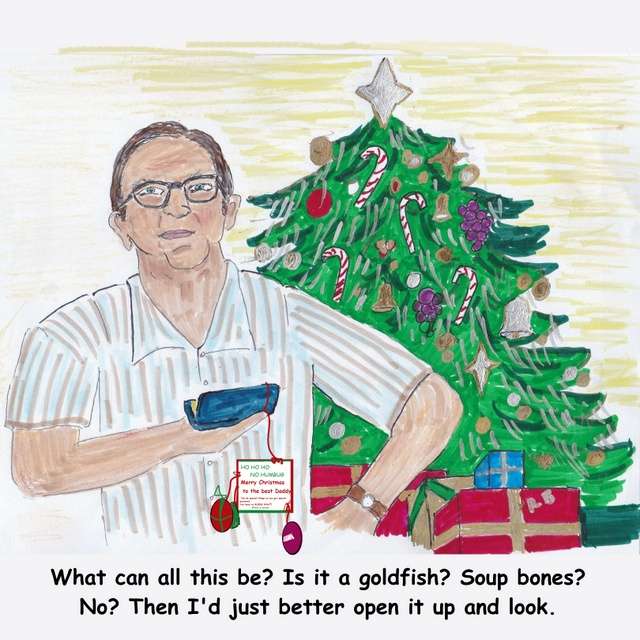 He unwound the paper round and round. When the hobo appeared, I jumped up and explained, “It’s got a hole in it, but it’s not broken. You put your cigarette in the hole and he blows smoke from his mouth.”

Daddy laughed and said just what I hoped he would. “I have to show this to Stanley. He’ll get a kick out of it.”

A GIFT FOR MRS. GATES

After breakfast, I ran to Mrs. Gates’ house. It was a warm day and she was sitting on the porch. When she saw the gift, even before she opened it, she carried on. “You’re the sweetest girl I ever knew. How many little girls would think of an old lady?” 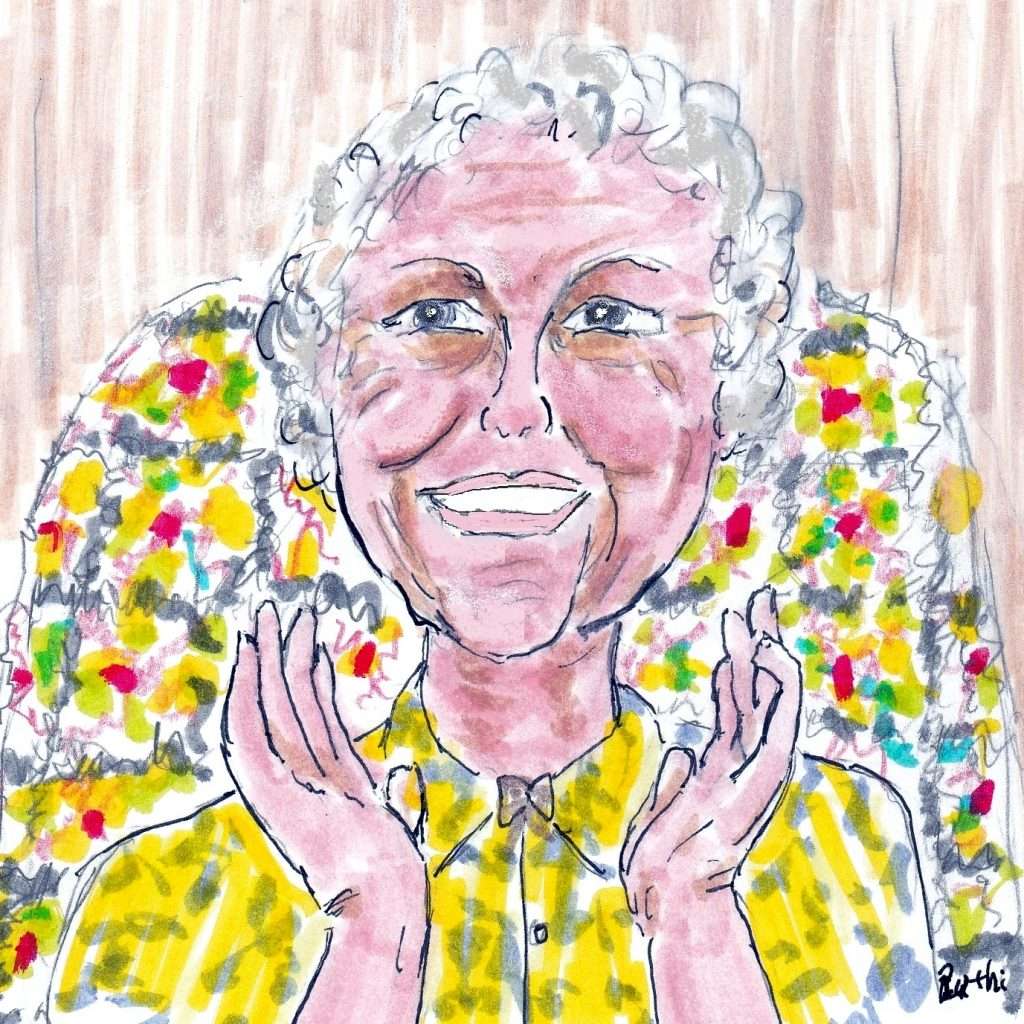 She opened the package and saw the vase with the roses. And you’d have thought I’d given her a Cadillac car.

She ran her finger over the vase and crooned, “Ohhh, my. It’s so fine. Why just look. Look how it catches light — just like crystal. It’s going to make my living room look so festive. How did you know red is my favorite color?” She stood up and hugged me. “You’ve just made my Christmas!”

Of all of my memories of childhood Christmases, that one, when I was nine years old, is the most vivid and the best. It was a first in so many ways — taking the bus to go Christmas shopping, all by myself. The excitement and the soaring sense of freedom and responsibility. The pride in seeing my family laughing and happy because of gifts I’d picked especially for them.  But my best memory is of Mrs. Gates and the wax roses. It was the first time I’d done something I didn’t have to do for somebody who didn’t expect anything, and it felt wonderful. 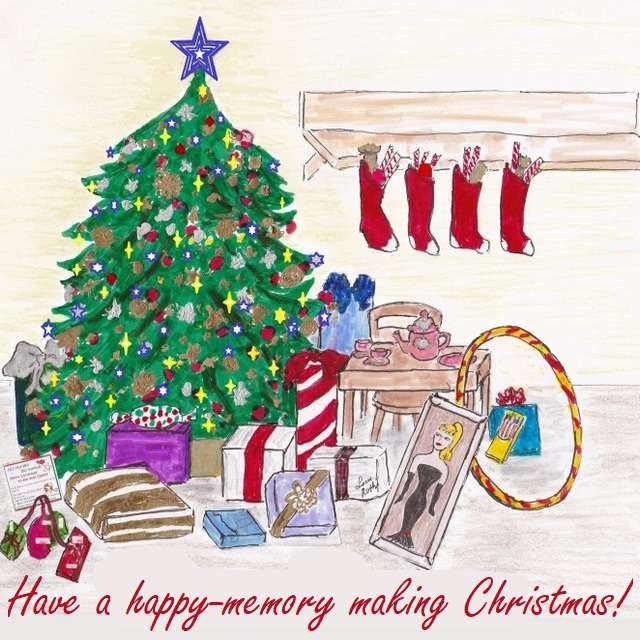 December 13, 2021
WANT MORE RUTHI?
Subscribe to my newsletter!
Get latest updates and exclusive content straight to your email inbox.
Give it a try, you can unsubscribe anytime.