I was nine years old and it was Christmastime. This was the first time Mama let me take the bus to Prichard, all by myself, to buy presents. And I had a whole seven dollars to spend! I sat on the bus, so excited I bounced up and down in my seat, till an old lady got on and sat beside me.

I got off the bus in front of Kress’s Five and Ten. With rows and rows of counters piled high with everything anybody could want, it was the best store in Prichard for buying presents – maybe the best in all of Mobile. 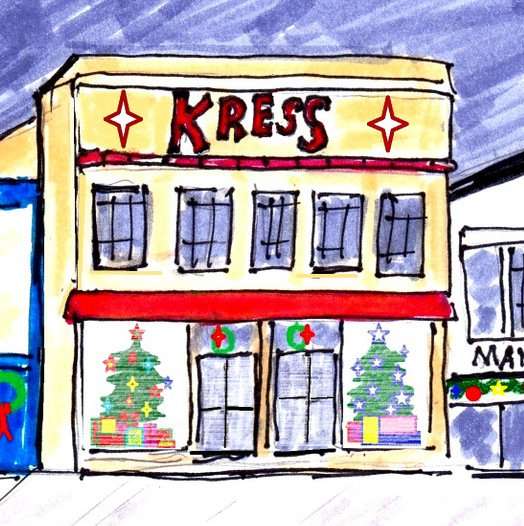 I walked past the soda fountain and only stopped for a minute in the toy section. I was there on important business — first at the men’s counter.

There was a beautiful pipe made of dark swirly wood, but it was two dollars and thirty-five cents, and Daddy smoked cigarettes anyway. Even better, was a fancy silver fountain pen in a blue case. It looked like it cost too much, too, but it was only seventy-five cents. Then I saw a tie clip with a silver boat on it for fifty-five cents — Daddy ran tugboats. I could buy both and still have nearly six dollars to buy my other gifts.

I was paying the saleslady when I saw the best thing — a little statue of a hobo with a red nose, bowed mouth, and black top hat. 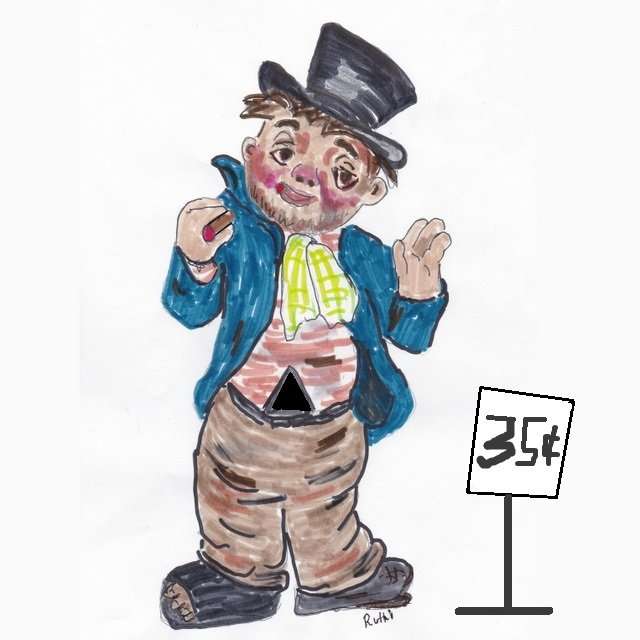 The lady said the hole was on purpose. “It’s an ashtray. When you put a cigarette in the hole, smoke comes out of his mouth.” That would make Daddy laugh!

I headed to the jewelry counter. It overflowed with beads, earrings, pins, and watches. 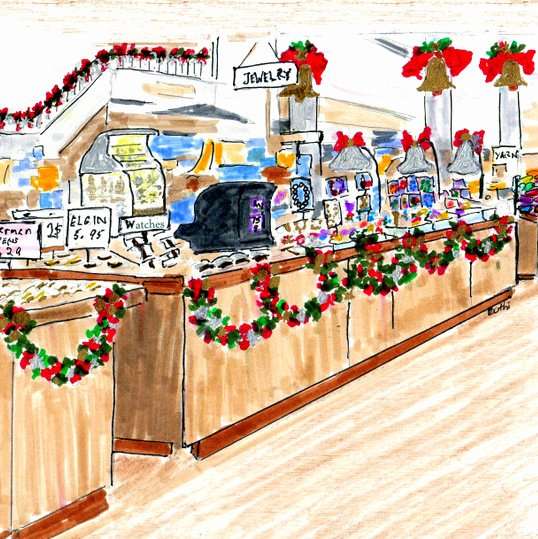 I picked up a necklace made of sparkly red rhinestones and asked the lady if they would be good for my mama. She wrinkled her nose and shook her head. “Too showy.”

She led me to a display of beads, picked up a necklace, winked at me, and broke it in two! I must have looked scared because she laughed and put them back together. “See?” she said, “They’re not broken. They’re pop beads — the latest things.”

Pop beads! Perfect! I  bought a set of three strands in different shades of pink.

I had two dollars and twelve cents to buy a gift for Grandma. I got the Lilac Talcum Powder she loved and a little red-crystal rose on a green stem pin.

I still had enough money for a coke-float and bus fare. Then, I got an idea. Mrs. Gates, an old lady on our street, was so sweet to me. I’d get a present for her, and I knew what. In the back, behind the dishes, for just ten cents each, there were wax flowers and vases – real crystal I thought. I bought a vase and a red rose to go in it.

I skipped home from the bus stop, hugging my packages, and spread them on my bed. I wrote a note to put in the box with Mama’s beads. “Dear Mama. These are pop beads. If you break them, don’t worry. They aren’t really broken.”

Then I got Mama’s wrapping paper and tape and set about wrapping. Present-wrapping was harder than I’d thought. I could see in my head what I wanted something to look like but I couldn’t make it happen. The boxes ended up patched and taped and tied with droopy ribbons.

But the hobo! He became a lumpy, lopsided, blob, held together by a half-roll of tape. I looked at the presents and started crying.

I tore off all the paper, blew my nose, and started over. It took a few tries but at last, they looked pretty and had only a couple of patched places.

The hobo was still a blob wrapped in red paper. Then, I had a great idea. I made a Christmas card for Daddy and tied the three packages to it. 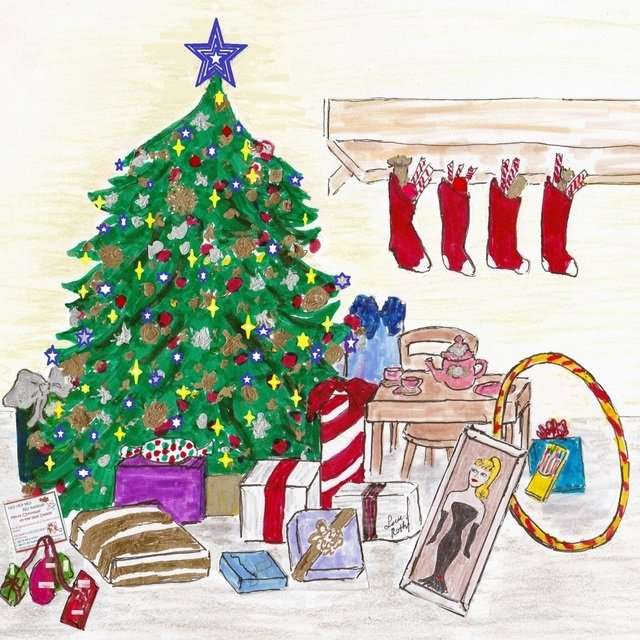 Christmas morning, I was awake hours before I could wake up Mama and Daddy without getting in trouble. Finally, it was six-thirty. Late enough, I decided, and ran to their room. “It’s Christmas! Wake up! Santa Claus came. Come on!” I ran to get Grandma.

Mama always went in first to turn on the tree. Then, we went in. The lights from the Christmas tree showered the presents with color. Candy canes and boxes of chocolate-covered cherries stuck out of the stuffed stockings that hung on the mantle. I thought our living room was more beautiful than any department store window in Mobile. Nobody ever knew how to make Christmas like my mama!

While Mama made coffee and hot chocolate, I sat on the floor inspecting the toys from Santa, a Barbie doll in a black evening gown, a real china tea set, a game, a hula hoop, a coloring book, and the biggest box of Crayola crayons.

Then it was time to open presents. I jumped up. “Open mine first! Here, Grandma, go first.”

Grandma opened the pin. “Oh, my, my,” she said – she always said that. “Isn’t this the prettiest thing!” And she pinned it on her nightgown.

“Mama, here. Open yours.” When she saw the beads and the note, she grinned her crooked grin. “I wanted these. Mrs. Reeves was showing hers off on Sunday. Now I have some.”

I picked up the card holding Daddy’s gifts. They dangled like a broken puppet as the paper bent and tore. “I couldn’t get it to look the way I wanted,” I said.

He read the card and laughed, then opened the pen. “I’ll write real fancy with this.” Next, he opened the tie clip and pinned it to his shirt. “Stanley’s going to be jealous of this.”

He held up the hobo. “Now, what’s this funny thing. Let me guess. It’s a bowl of goldfish.” I laughed and shook my head. “Then soup bones maybe? No? I’d better just open it.” 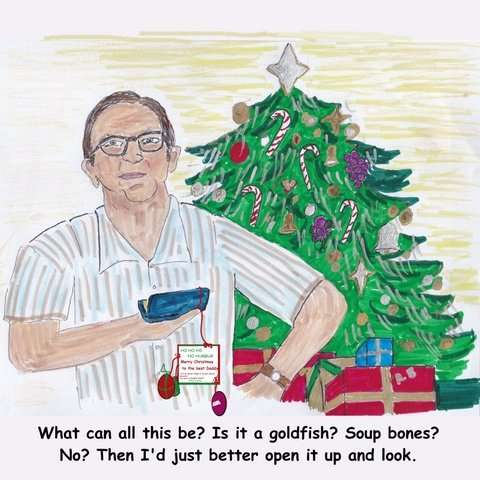 He unwound the paper wrapped round and round and laughed when he saw the hobo. I jumped up and explained, “It’s got a hole in it, but it’s not broken. You put your cigarette in the hole and he blows smoke from his mouth.” Daddy laughed. “I have to show this to Stanley. He’ll get a kick out of it.”

After breakfast, I went to see Mrs. Gates. When I gave her the present, she carried on like I’d given her a Cadillac car. “This is just beautiful and so fine. Why, just look at how the vase catches light just like crystal.” She hugged me. “You’re the sweetest girl to think of me. You’ve made my Christmas!” 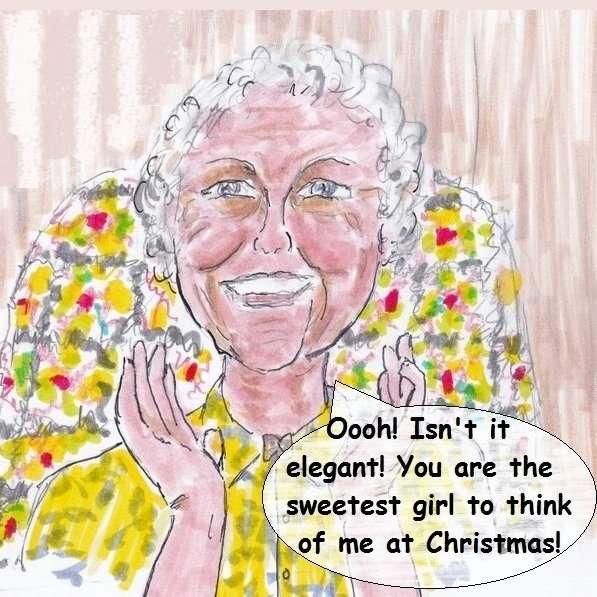 It was the best Christmas – just like I knew it would be.

December 21, 2020
WANT MORE RUTHI?
Subscribe to my newsletter!
Get latest updates and exclusive content straight to your email inbox.
Give it a try, you can unsubscribe anytime.