Old Doesn’t Mean Helpless — Or In Need of Assisted Living

“It is a truth universally acknowledged, that a single man in possession of a good fortune, must be in want of a wife.” — Jane Austin

It is another commonly acknowledged truth that a widowed man of advanced years must be in want of assisted living — or a new wife. Will Barnes rejected those notions, “Old doesn’t mean helpless — or in need of assisted living!”

A Man Without A Wife

When Sally Barnes died, leaving Will to live alone for the first time in fifty years, the women in his life gathered around. They knew Will Barnes was now a man in need of care. And they were ready to give it.

First was Cindy, Will and Sally’s daughter. She assumed command, planned the funeral, and even told Will what tie he should wear. In the car after the funeral, Cindy was talking but Will was zoned out. He didn’t hear a word she said until they were getting out of the car and he heard her say, “Daddy, I just don’t want you to worry. I’ll take care of everything.”

He wondered, what the hell is she talking about? He said, “I’m not worried.”

As is custom, family and friends gathered at Will’s house after the funeral to be together, to talk, and to eat. Sally’s friends had been bringing food all day and the table was full — pies, cakes, two hams, sweet potatoes, potato salad, casseroles, fried chicken, biscuits, cornbread, sweet tea, and coffee.

Cindy led Will to the sofa. “Sit here. I’ll fix you a plate.”

Will shook his head. He wasn’t hungry. He was just weary and tired of people. He went over and poured himself a cup of coffee and took a chair next to his neighbor, Herman Sykes. Herman was a man of few words. Will liked him. He didn’t have to make conversation.

Ah, Casserole — The First Step in the Matin Ritual

Another neighbor, Faye Wilson, came in and hugged Will. “I’m so sorry. Sally was a wonderful woman. So you don’t have to worry about cooking dinner, I’ll bring a casserole by tomorrow. Freeze it till you need it.”

She joined a group of women who stood at the food table, talking in whispers. “Poor man,” she said. “I can see he’s lost without her.”

Marcia Reed said, “He must be hungry. I’ll take him a plate,” as she forked chicken onto a plate. Marcia had been one of Sally’s best friends, a position that bestowed authority.

She took the food to Will. “Will, you should eat. I brought you some of my fried chicken and salad.”

Will took the plate and set it on the table. “Thank you. I’ll have it directly.”

“Okay, but I’m watching to see that you eat,” she said with a maternal smile. “I’m making chicken and broccoli casserole next week. I’ll bring you enough for two meals.”

“No. Please don’t go to the trouble,” is what he said. But what he was thinking was, Marcia, I’m a better cook than you are any day of the week — and I hate broccoli.

“No trouble at all. You know you can’t make just a little. With Joe gone, I can’t possibly eat it all.” 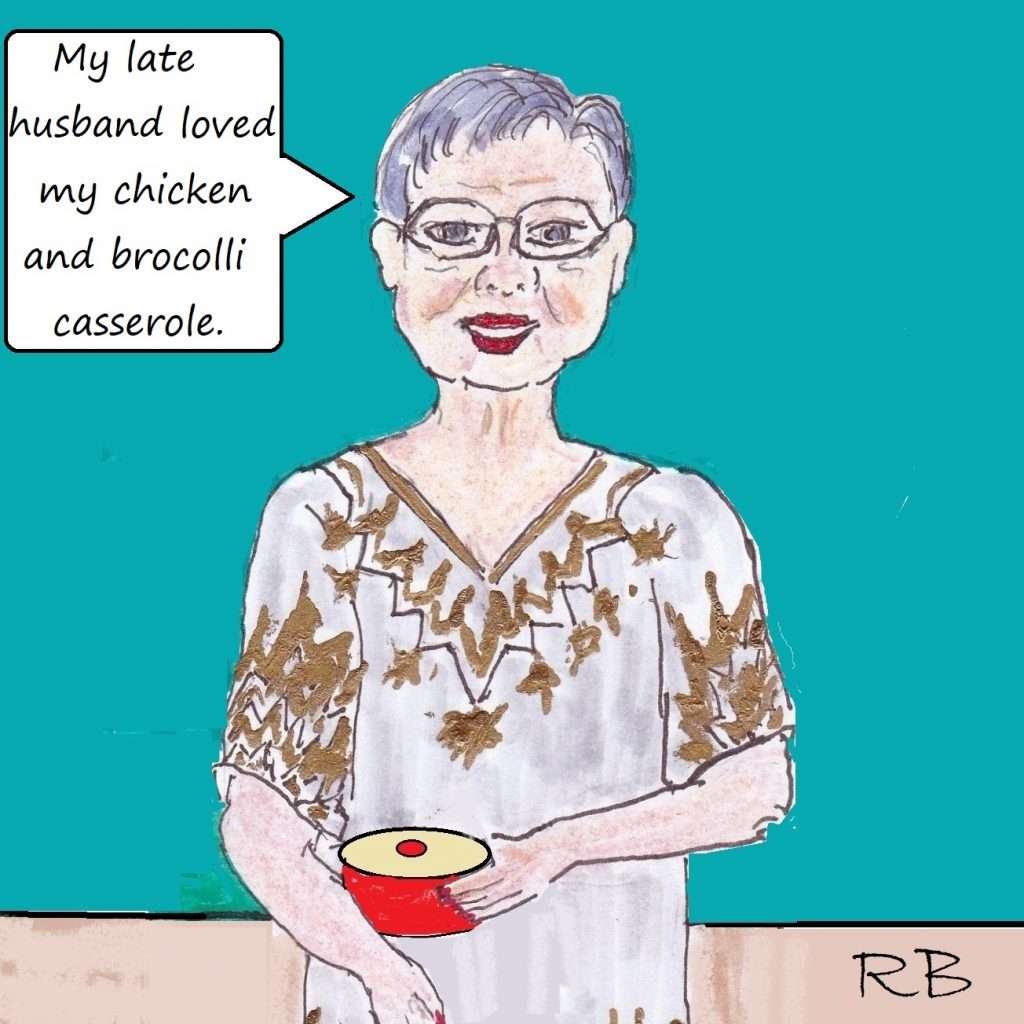 When she left, he turned to Herman. “Why do these women think I want their cooking? Truth is, I’m a better cook than any of them. And why are women always pushing casseroles?”

Herman grinned. “Ah, Casserole, the first step in the mating ritual. You better watch out.”

Will grunted, “I’m afraid so.”

We Need to Talk About Your Life

When the last person left, Cindy sat down beside Will. “Daddy, I told Ben to take the children home. I’m staying here with you tonight.”

“No, you’re not! I don’t need you to tuck me in. Just see to the food. I’ll never eat it. Take it home. Or give it to the neighbors. Or throw it away. Just leave me some ham to make an omelet. Then you go on home. I’m tired.”

“All right, but I’m coming over early tomorrow. We need to talk.” 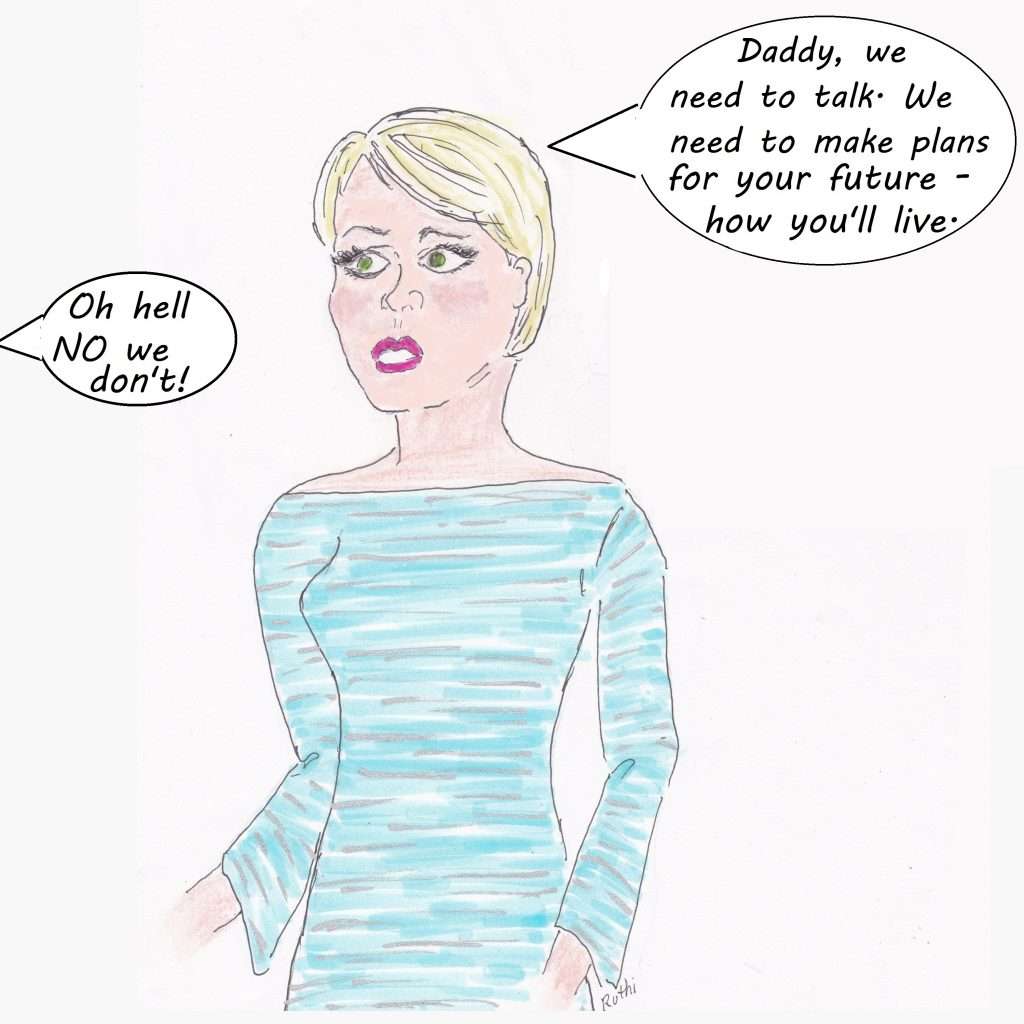 Her Plan For Will’s Life

The next Sunday, Will went to dinner at Cindy’s house. He made up a game for the kids and was having a good evening. Then, after dinner, the kids went out to play, and Cindy started.

“Daddy, you know Ben’s Aunt Harriet. She moved into an assisted living home near here. We just visited her. It’s a lovely place. It could be just the place for you. There is a cafeteria with excellent food. And they have planned activities and outings to shows and the grocery store, so your days won’t be empty.”

“I can have all the outings I want. I have a car.”

She ignored him. “Harriet has a darling little efficiency with a mini-fridge and microwave. You should look at this place. It’s pricy but with what you can get for your house….”

“Stop! Why the hell do I want to look at a cute efficiency with a mini-fridge? I have a house with a whole kitchen. It’s pricey too but it’s all paid for.” 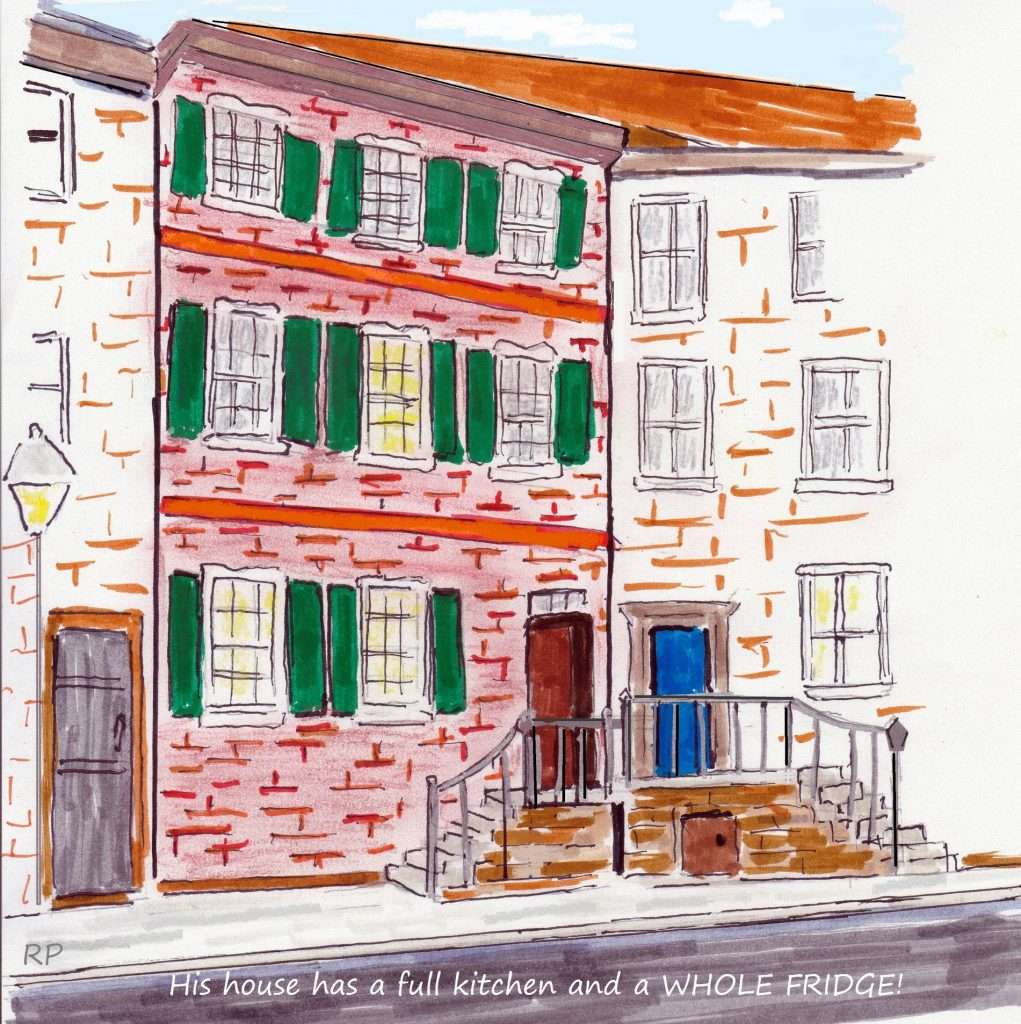 “Daddy, think! You’re not young. You have to look at your options.”

“I’m as young as I was the day before Sally died, and you weren’t nagging us to move then.”

Will’s days were not empty. He had a busy and interesting life for himself. Every morning, he shaved and dressed in a crisp shirt, then headed out to breakfast. Some mornings he walked to Mae’s Market for café au lait and a croissant. Other days to La Madeleine where he’d have quiche and sit outside to watch the people go by.

Some afternoons, he picked up the grandchildren and took them to the zoo or the playground. Others, he worked in his garden. Sometimes he sat in the park by the river and directed tourists to the best places to eat.

Several nights a week, he cooked dinner. He’d always enjoyed cooking. He tried out new recipes from Sally’s cookbooks — and made Herman his taste-testing guinea pig.

It had been a year and the widows kept coming around. He heard the doorbell and looked out, hoping it was a Jehovah’s Witness rather than a woman bearing a casserole. But it was a woman. He opened the door — just a crack and said, “Why, hello,” sounding surprised.

“I stopped by to bring you some onion tarts and my cheesy chicken casserole. My late husband just loved it.”

“Thank you. It’s mighty nice of you,” he said as he accepted the food through the crack. Then he close the door and walk to the kitchen where he dumped the food in the garbage — just as he always did.

“You’re being rude,” said Cindy. “You should ask the ladies in.”

“They don’t have the right bait. If a woman wanted my attention, what she should say is, ‘Will, I was at the butcher shop and picked up a couple of two-inch porterhouse steaks. I thought you might like to share them.’ That would be different.”

She laughed. “But don’t you think about getting married again?”

“Hell, no! I already had a wife! I don’t need another one. She’d likely get sick the day I married her and I’d be stuck waiting on her.”

More Plans For Him

A few days after Christmas, Cindy and Ben asked Will to lunch. They had a new plan. “Daddy, Ben and I have talked. We want you to come and live with us.”

Will choked on a French fry. “You can get that idea out of your head right now!”

She stamped her foot. “It’s not fair of you to worry us. You need care! Live with us or look into assisted living.

“I’m not doing either one.”

Ben said, “Then at least be practical. In case something happens and you need money or a hospital, we should have your power of attorney.”

“Forget that! You’re not getting power of anything over me! You don’t get to pull the plug. Stop that talk before I get mad.”

Will was quiet for several minutes. When he spoke, he was calm. “Cindy, you’re a good daughter and I love you. And Ben, you’re a good man. But get off my back! I’m healthy, I’m strong, and so far I have all my marbles. 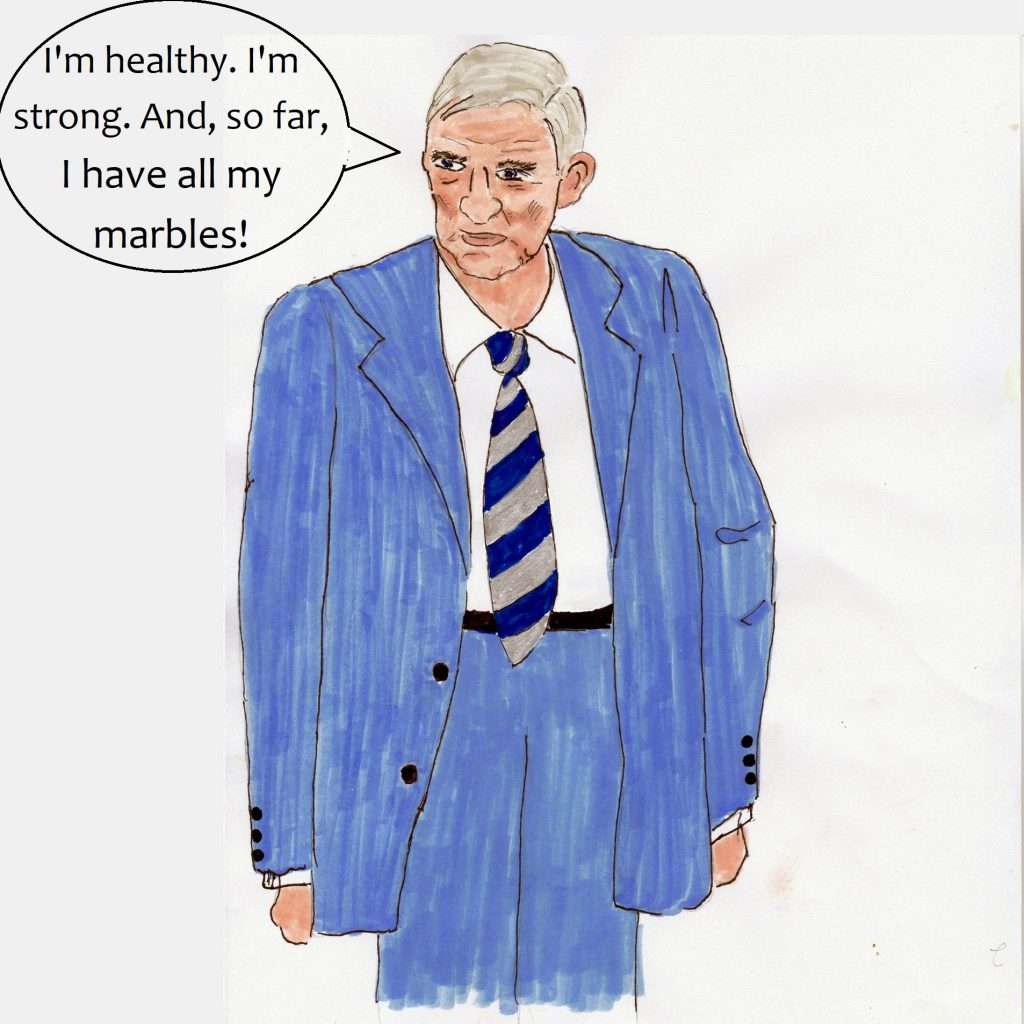 “If any of those things change, I’ll let you know. Until then …” he suddenly stopped, and a wide grin came over his face. “Until then, keep an eye on my house for me. I’m going to Florida for the winter.”

“What!? When did you arrange for that.”

“In about twenty minutes — as soon as I can get a travel agent on the phone. I’m going to sit on the beach and read and relax — and run my own life.” 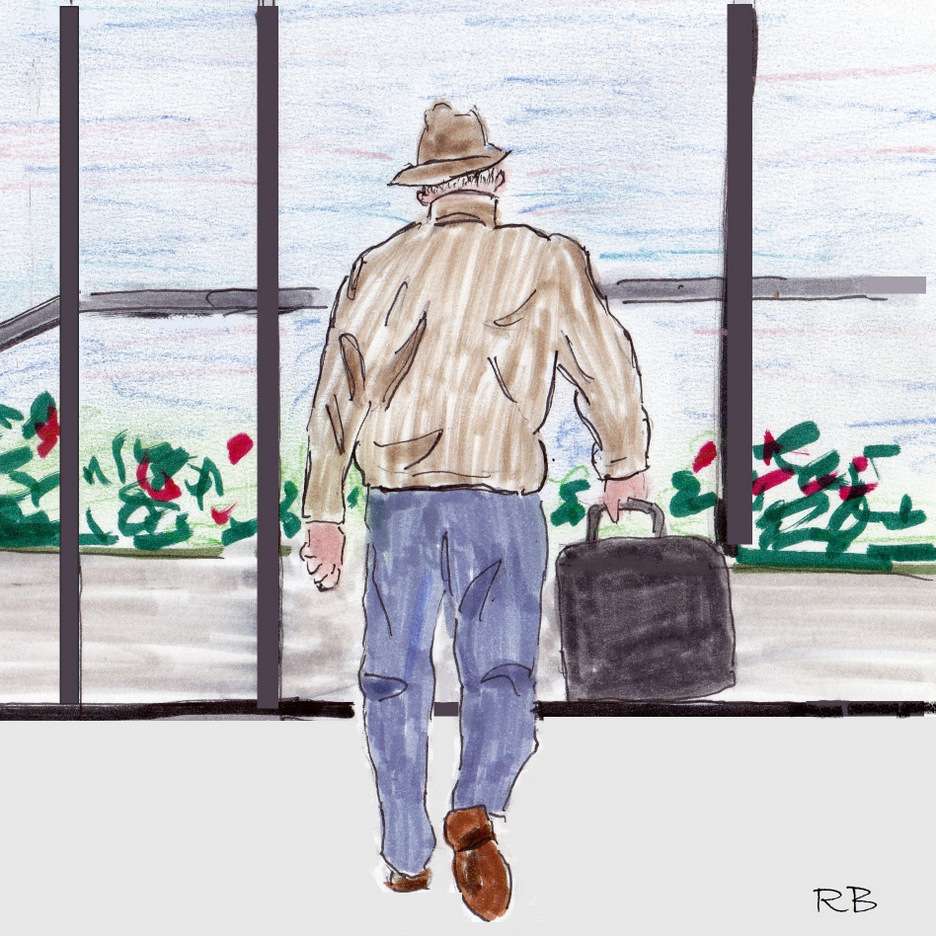 A Widow in Florida

The next week Will was sitting in a lounge chair on the beach reading a book and sipping a piña colada. Suddenly a shadow came over his book. He looked up to see a lady in a wide-brimmed sun hat.

“Excuse me. I’m Ellen Jacobs. We’re staying at the same hotel. I heard you’re smart with investments and I’d like to ask your advice. My husband recently died and left me a few thousand dollars to invest…” 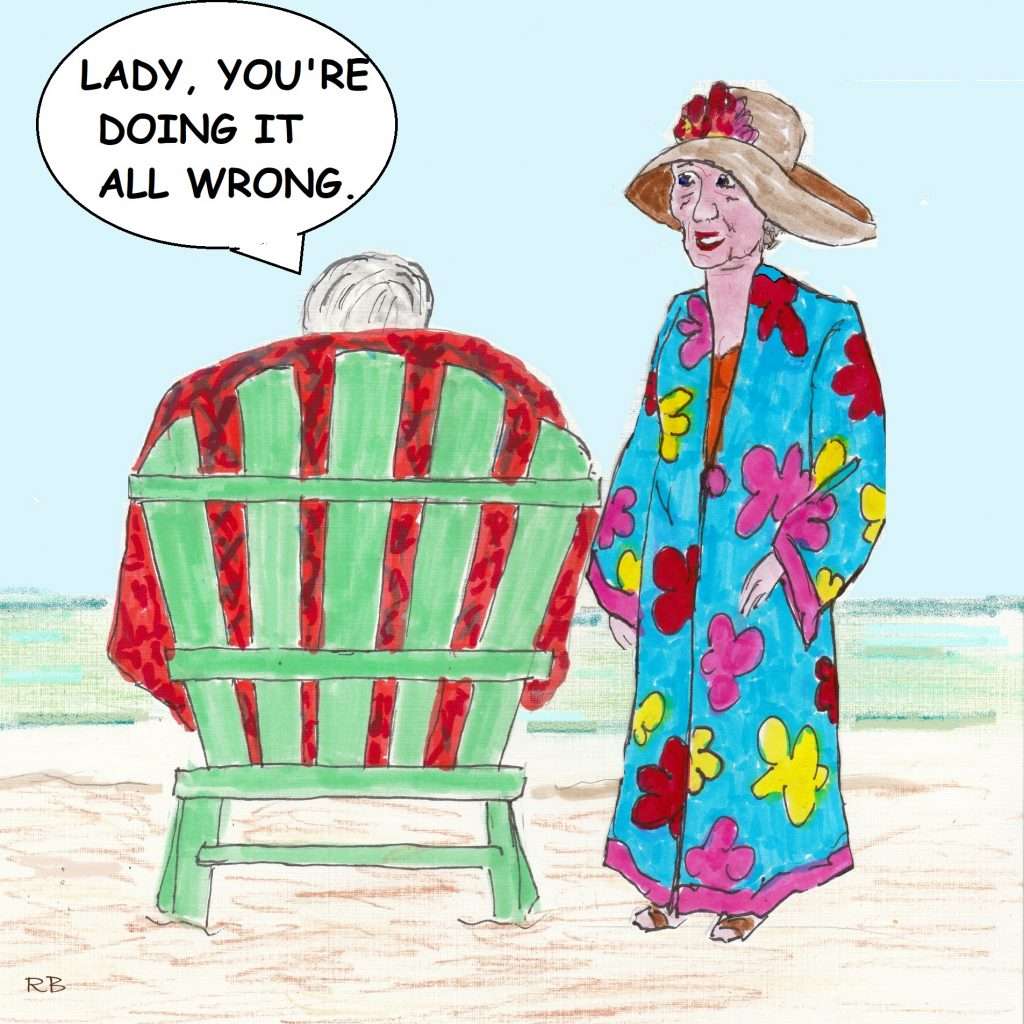 “Next time you want to get a man’s attention, you go up and say, ‘Excuse me. My husband just died and left me several million dollars. I was hoping you could advise me on investments. Then you’ll have his attention.’” 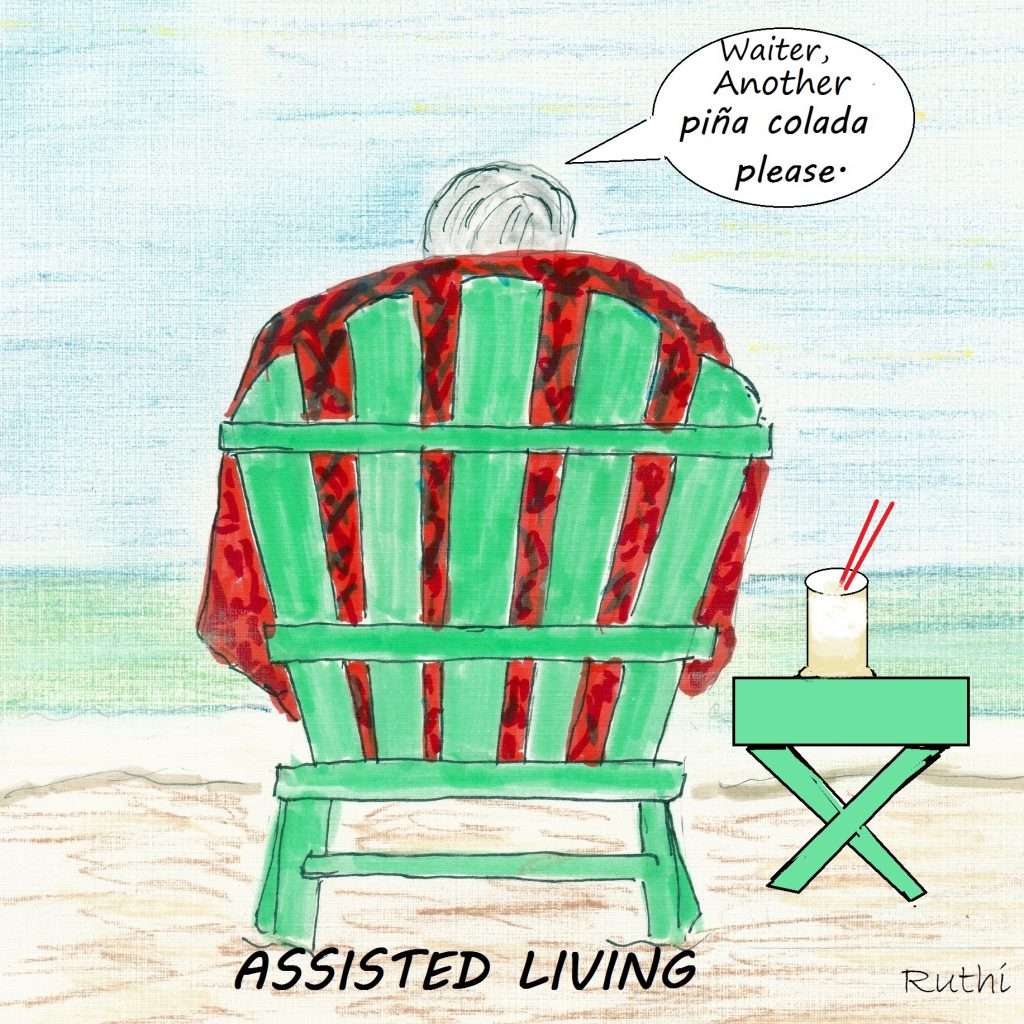 Will signaled a waiter and ordered a sandwich. Just minutes later the waiter was back with his lunch and a fresh piña colada decorated with a pineapple slice. He sipped the drink and smiled. This assisted living was alright after all.

November 2, 2021
WANT MORE RUTHI?
Subscribe to my newsletter!
Get latest updates and exclusive content straight to your email inbox.
Give it a try, you can unsubscribe anytime.