I was seven the first time I met Aunt Esther. She’s rich… scary rich, and rich people aren’t like us. She came to Mobile all the way from California — on an airplane! It was my first up-close look at an airplane and the first time I ever went to an airport. I’d never even known anybody who’d flown in a plane. And I for sure had never known anybody like Aunt Esther. She didn’t dress like us or talk like us. And she didn’t have the same rules.

We stood at the airport window. The silver plane got bigger and bigger ’til it glided to a stop just a few steps away. Men bustled out with carts and rolled metal steps up to the plane — just like in old movies.

Then the door opened. People came out all dressed up in suits and hats like they were going to church — and it was a Tuesday. For sure, I thought, those rich people aren’t like us. Then Aunt Esther came out and she looked like the star of the movie. 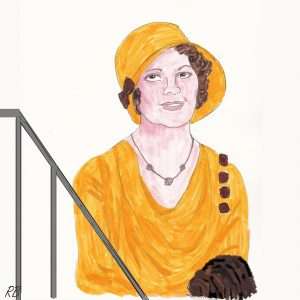 Her dress was gold jersey and soft so it hung like drapes. It had big brown buttons coming down from the shoulder, and everything matched! Her gloves and purse and shoes and the bow on the side of her hat matched the buttons on her dress. And she had a real mink stole hung over her arm. She was the most elegant person I’d ever seen in real life.

She stopped on the top step and looked around the crowd. Then she saw Mama and waved her gloved hand.

“There she is, cool as a cucumber,” said Daddy.

No, I thought, it’s Mobile in August. She’s gonna be hot.

“GUSSIED UP ENOUGH TO EAT FOR CHRISTMAS DINNER”

Aunt Esther rushed in and hugged Mama, then me.

When she came to Daddy, she stood back, looked him up and down and said “Well, Norvelle, I see you haven’t changed a bit. I do believe that’s the same shirt you wore last time I saw you.”

I looked to see if she was smiling.

He flicked the fur of her mink stole and said, “Esther, we’re just plain folks down here. You’re gussied up enough to kill and eat for Christmas dinner.”

“Thank you, Norvelle. I’m sure that’s a fine compliment coming from you.”

Then he grinned and held out his arms. “Come over here, Esther, and give me some sugar.” 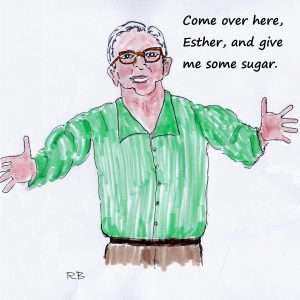 “Not for a million dollars,” she said holding up her hands to block him. But then she laughed, gave him a half-hug, then held out a paper. “Norvelle, the baggage claim.” It sounded like she was giving him an order. I looked to see if he was still grinning. I never could tell if they really didn’t like each other or were teasing.

Mama looked around and asked, “Where are your boys?”

“Oh, they’re back in California with Mama. This is my vacation. I’m meeting Raymond in New York when I leave here. I couldn’t enjoy myself with them underfoot.”

I’m glad Mama doesn’t go on trips without me.

“That sounds grand,” said Aunt Esther. I’d only heard people in movies say “grand” like that.

RICH PEOPLE LIVED IN CALIFORNIA WHERE THE HEAT WAS DRY

We walked out of the airport into Mobile’s summer. Aunt Esther almost fell over as if the air had punched her. 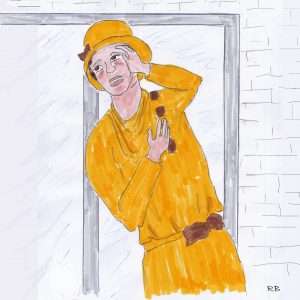 “California gets every bit this hot,” he said.

“Yes, but it’s a dry heat,” she said and looked like she might faint. “I may die from heat exhaustion.”

And all that was before she found out our car wasn’t air-conditioned!

Daddy said, “There’s plenty of air outside. Open the window. You’ll get a breeze.” He was still grinning.

I had rules Mama and Daddy taught me. Think before you speak. And don’t brag about what you have. And if you can’t say something nice…. But I don’t think anybody told Aunt Esther — or maybe rules didn’t mean rich people.

Aunt Esther took one look at our ten-year-old Plymouth Savoy and made a face. She touched the handle with two fingers as if it was dirty and would rub off on her. 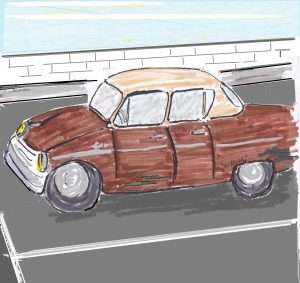 It’s a good thing we aren’t in Daddy’s old blue pickup truck with the broken spring and rusted-out fenders daubed with yellow Rust-Oleum paint, I thought. 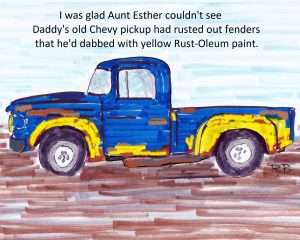 “Norvelle! You’re still driving this old car? They make new ones every year, you know.”

“So does a mule wagon but I wouldn’t want to ride in one.” She laughed at her joke. I thought a mule-drawn wagon sounded fun.

“Raymond just bought a new Cadillac. You should look at one. I know you don’t have the kind of money we do, but you could buy it on time.”

“Nope. If I up and bought a Cadillac, folks would think I was getting uppity.”

“Yep. And nobody likes uppity.”

“Really. You need a car with air conditioning. Get a used car if it’s all you can afford.”

“You know, Esther, I’m sure glad to see you come visit — or I’d never know how poor we are.” 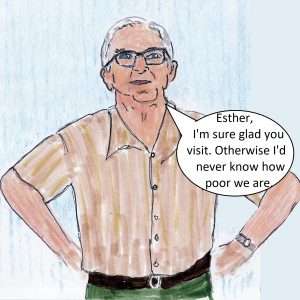 Mama always defended Aunt Esther when people got mad at her. “Esther doesn’t mean it. It’s just her way.”

When we got home, Aunt Esther opened the car door, fanning herself, and sucked in a big gulp of air. But she blew it right back out, coughing and holding her fur to her face.

“What is that smell?”

“That is the foulest odor I’ve ever smelled.”

Daddy said, “After a few days you don’t even notice it.”

RICH PEOPLE AND PICTURES OF THINGS 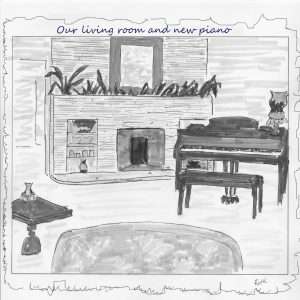 After supper Aunt Esther brought out pictures to show us. Except for one, they were all pictures of things — tables, chairs, lamps, curtains, wallpaper. She even had pictures of her stove and refrigerator. 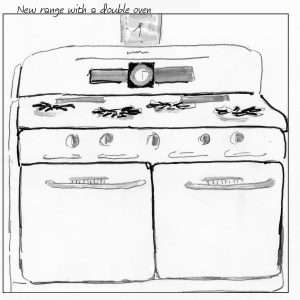 Mama took pictures with her Brownie camera but we didn’t have any pictures of our things.

The first picture was of, “little Zack. And that’s our new Cadillac he’s standing by. And this is our living room with the new piano by the fireplace. You can’t imagine how difficult it is to decorate around a grand piano. But it turned out fabulous.”

The fireplace had plants growing out the top. I wondered why they didn’t burn up.

She picked up another picture. “These are the new art deco lamps.”

I said, “They look like they’re raining pieces of broken glass.”

“They aren’t broken. They’re prisms. The lamps are imported from Europe. They’re expensive and very fragile.”

Mama stared at the next picture. “The glass flowers are a nice idea. They won’t die.”

Mama said, “You let people put cigarettes out in them?”

Mama said, “All these beautiful things — I’d be afraid they’d get broken with two little boys in the house.”

“Oh, the boys are never allowed in these rooms except to practice the piano. And they know not to touch things.”

I thought to myself, I wouldn’t like living at Aunt Esther’s house.

Aunt Esther liked being rich because rich people had better everything — better, newer cars with air conditioning, rides on airplanes, finer clothes, bigger houses, and better food. (I didn’t believe that part about better food. Nobody had better food than Mama cooked.)

Rich people even had better weather — at least in California where most of the rich people seemed to live. That’s why it was better to be rich.

Aunt Esther sure loved Mama. She felt bad that Mama was poor, so she brought things for her — fancy things, like a set of ivory steak knives and Irish linen napkins. Mama put them away so we wouldn’t mess them up. I found them, safe, sound, and unused, in Mama’s trunk after she died.

She gave Mama clothes too — a silk crepe dress and matching jacket, a leather purse, a pin, and one of her old mink stoles. Mama loved the dress and wore it to church. She wore the stole a few times too, but it was a bother to keep on when she was carrying her purse, Bible, and Sunday school books so it hung in the closet.

Three days later we were back at the airport waving goodbye to Aunt Esther. She looked more movie star than ever, wrapped in her fur, and wearing a furry hat. 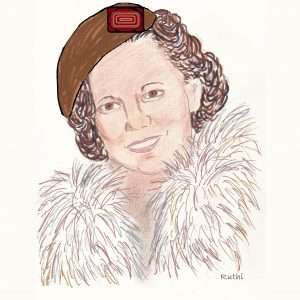 I guess I don’t mind that rich people aren’t like us, I thought. I don’t want to wear church clothes every day or wrap up when it was hot. And I don’t want to have to stay out of rooms in our house and not touch our things.

Out of the blue, Mama said, “Seeing Esther makes me sad. I feel sorry for her.”

“She has money and fine things but she’s not happy with herself. If you’re happy with who you are, you don’t have to talk about what you have. Esther is always trying to prove she’s as good as other people. It’s sad.” 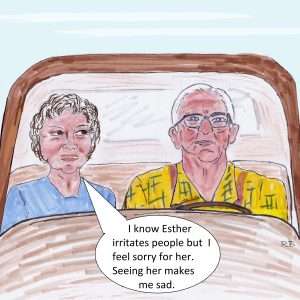 April 11, 2022
WANT MORE RUTHI?
Subscribe to my newsletter!
Get latest updates and exclusive content straight to your email inbox.
Give it a try, you can unsubscribe anytime.