My First Day at My First Job — Failure Isn’t Fatal

But it didn’t seem that way to me when I was a kid with my first big failure. When you were a kid did you ever fail at something then wonder if you’d be a failure your whole life? I did.

It happened when I got my first job — working Saturdays in a grocery store. I say I got it, but I didn’t actually get it or even have to interview for it. My mother knew the store manager and got it for me.

I was excited. I’d been in grocery stores and I knew what cashiers did. It looked simple. Confident that I would do well, I walked into the store bright-eyed and bushy-tailed. Failure was the farthest thing from my mind.

That first morning went great. I mainly filled out forms and watched other people work. I was right. This job really isn’t so hard, I thought. Just punch in the prices, take the customer’s money, and give back change.

Money? Can you remember the last time you bought anything with actual money?

Then I was assigned a register and I discovered a big problem – there was nowhere to sit. I was wearing new shoes. I’d bought them because I wanted to start my job off on the right foot. They were really cute too — orange patent leather with a white leather flower. But standing all day? They already killed.

Come to think of it, I’d never looked at a cashier’s feet. They probably never got to wear cute shoes.

But I had an idea. How about putting a stool beside the cash register? It would fit. I took my idea to the manager. He didn’t go for it. He didn’t seem to like new ideas. 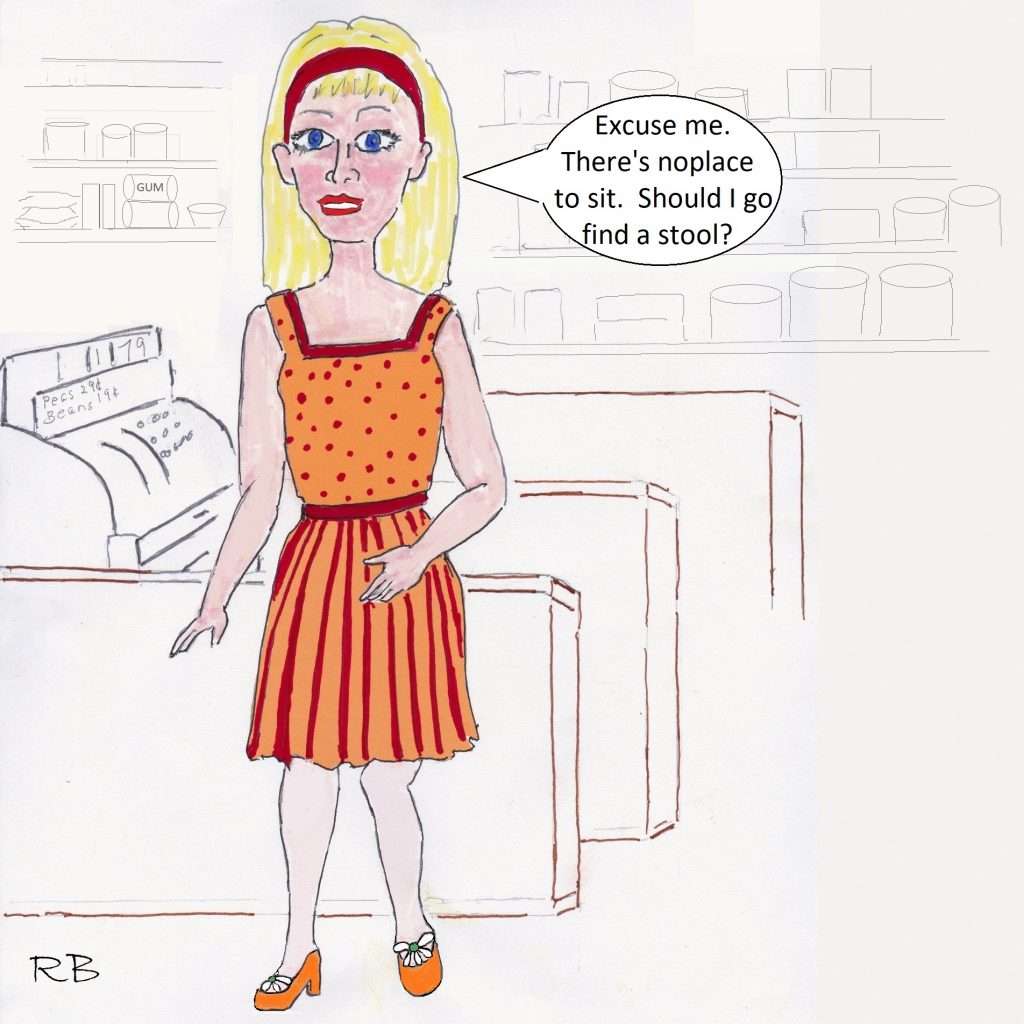 The Cash Register Was a Bully

I took my place at the counter, without a stool, but still positive. I was going to be good at this. Then the customers started coming. And right away, I learned I’d been wrong.

Simple? The cash register certainly wasn’t. It was a bully. It dared me to make a mistake. Hit just one wrong key and the whole price was wrong! And you couldn’t just go back and erase. I got another idea.

When I discovered I’d charged two cents too much for one item, why couldn’t I just take two cents off another one? The manager didn’t like that idea either. 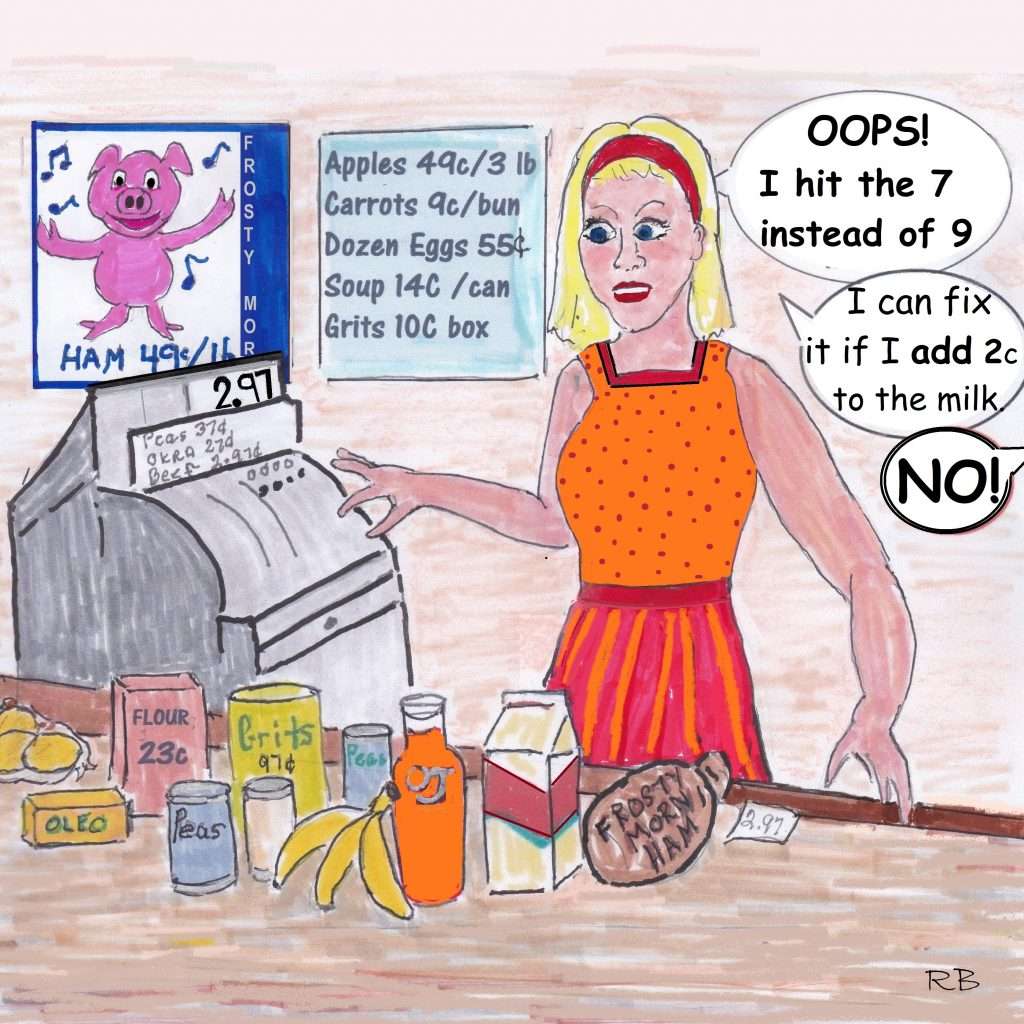 There was a way to cancel the wrong price and re-enter it — but that didn’t work unless I caught the error on the spot — before ringing up more items.

Once the whole order was finally rung up at the right prices, came the next hurdle. The customer handed me money — and never the exact amount. I had to count out change — dollars, quarters, dimes, and pennies … so many pennies. Where did stores get the idea that all the best prices ended in 9? And even nice people can get nasty about their change.

Too late I learned something else. Cashiering is a dirty job. Money is dirty — really dirty. By the time I saw that my fingers were black from handling money, I’d already ruined my favorite dress. 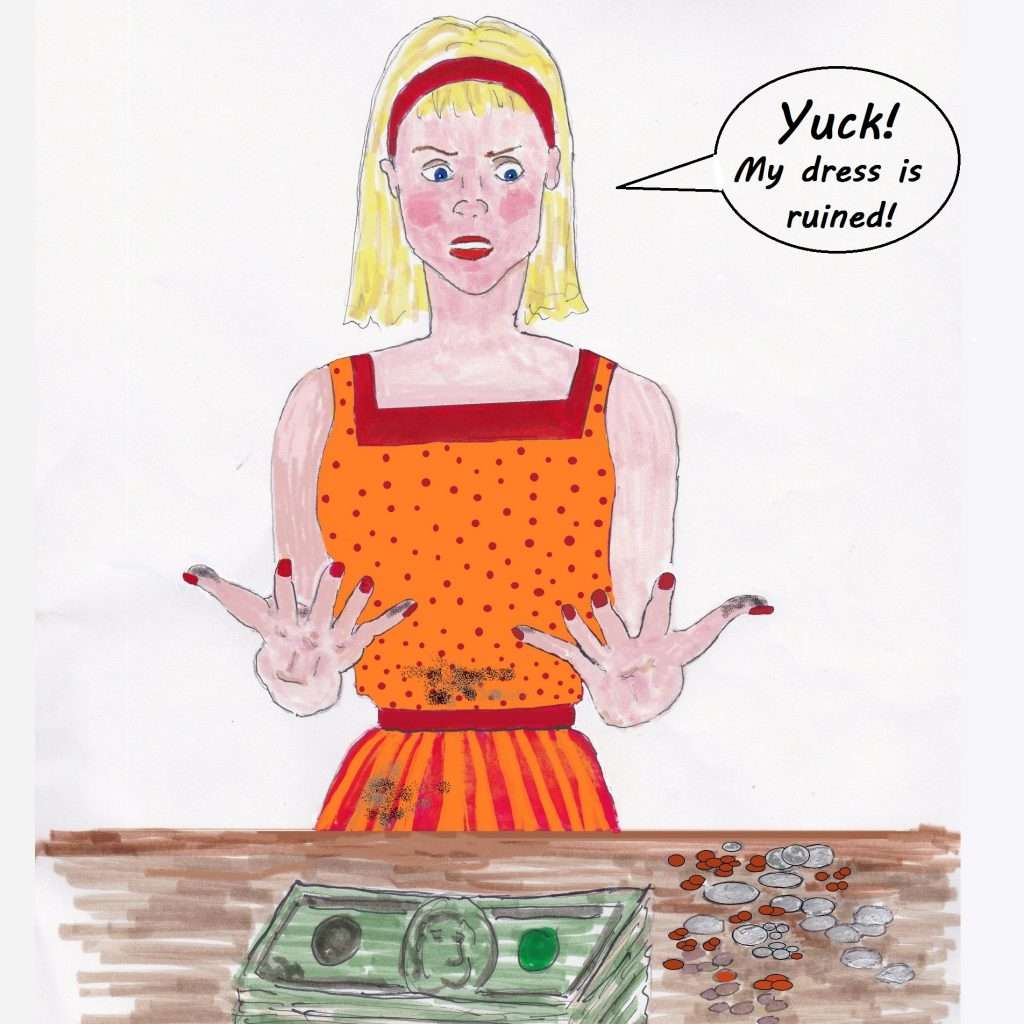 The Vegetables and The Pricelist

The next big hurdle was vegetables — they didn’t have price tags.

Why not? Was I supposed to remember the price of every vegetable? I couldn’t! There was a three-page pricelist where I had to look up the prices. I had to use it every time even if I’d just rung it for the customer before. It took time and a line of people was waiting.

When they loaded my counter with carrots, celery, squash, and beans, I wondered, don’t these people know that vegetables come in cans — price-marked cans? Apparently not. So, I fumbled through the pricelist again and again. And the line grew longer.

Then, a woman plopped a bunch of things on the counter that I’d never seen before. They looked like hairy yellow carrots. I didn’t want to show my ignorance, so picked up the price list and scanned for – I didn’t know what. “Parsnips,” snapped the woman and rolled her eyes. She didn’t have to sound so grouchy. 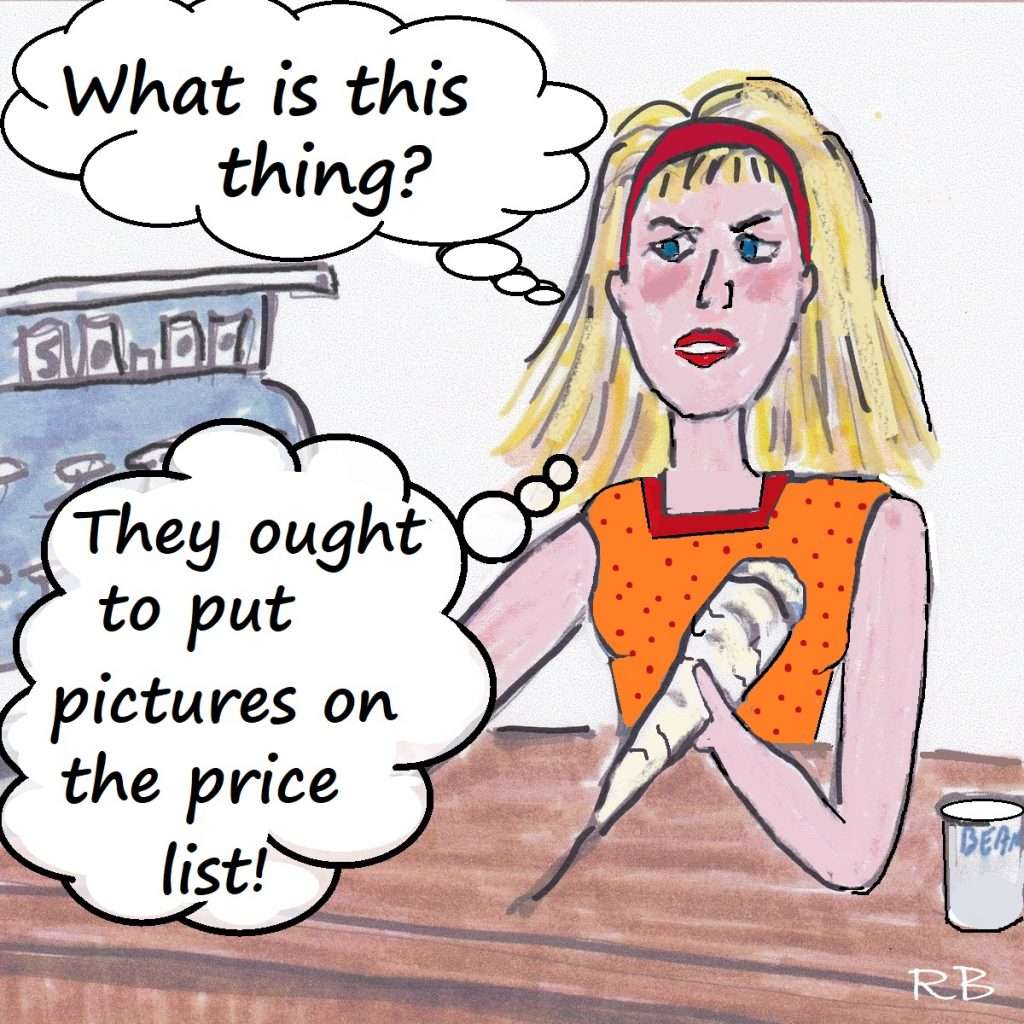 I was getting frazzled and hit more wrong keys. The customers, who had been patient at first, were becoming irritable. When the line reached halfway to the meat counter, they started getting hostile.

One Little Mistake is Not a Failure

Then I made one little mistake and they went off the deep end. I’d successfully faced the challenge of a shopping cart that was stacked chock-full of groceries. I was proud of myself. But then the customer found one little mistake.

I’d charged $1.23 for the flour instead of 93¢. I had to put everything back and start over. I’d never known people could be so mean about a little mistake. I said I was sorry, but it got ugly.

I saw the manager race-walking toward me and knew I was in trouble. He apologized to the customers and took over. He told me to go take a break. 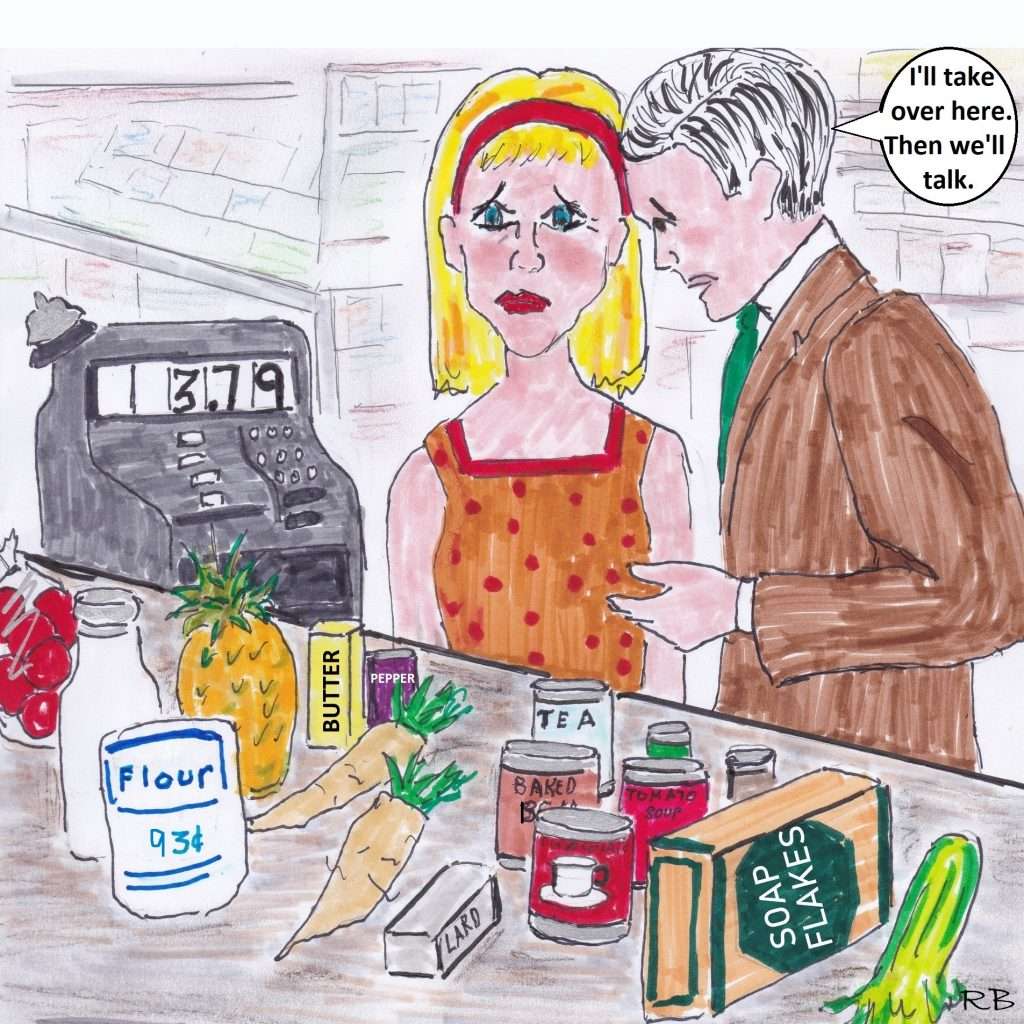 I sat in the breakroom with that sick feeling in my stomach you get when you’re scared and in trouble. It was just like the day I got sent to the principal’s office in the third grade. 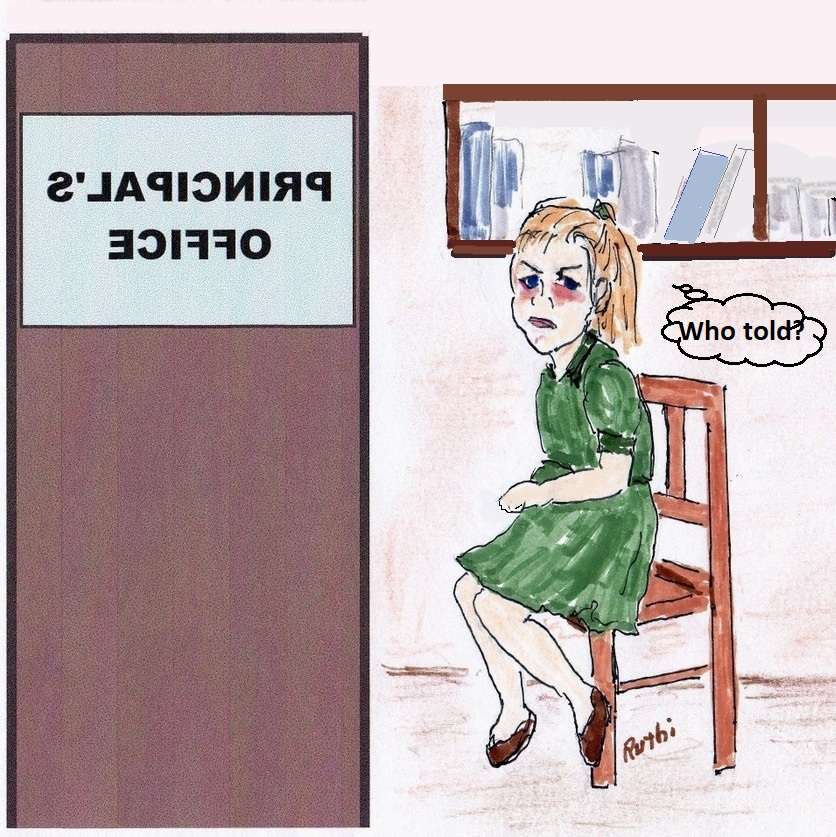 (Why was I sent there? For writing my name in the wet cement of the new sidewalk. I never found out who told on me.)

I didn’t know what the manager would say, but I knew the truth —

I was not cut out for the high-pressure world of cashiering!

I was sure I going to get yelled at. But he didn’t yell. He was really nice. I suppose I wasn’t the only person he’d met who couldn’t master the skills to be a cashier. He paid me for the day even though I’d only worked six hours. I left the room embarrassed but relieved that I didn’t have to do that job anymore. 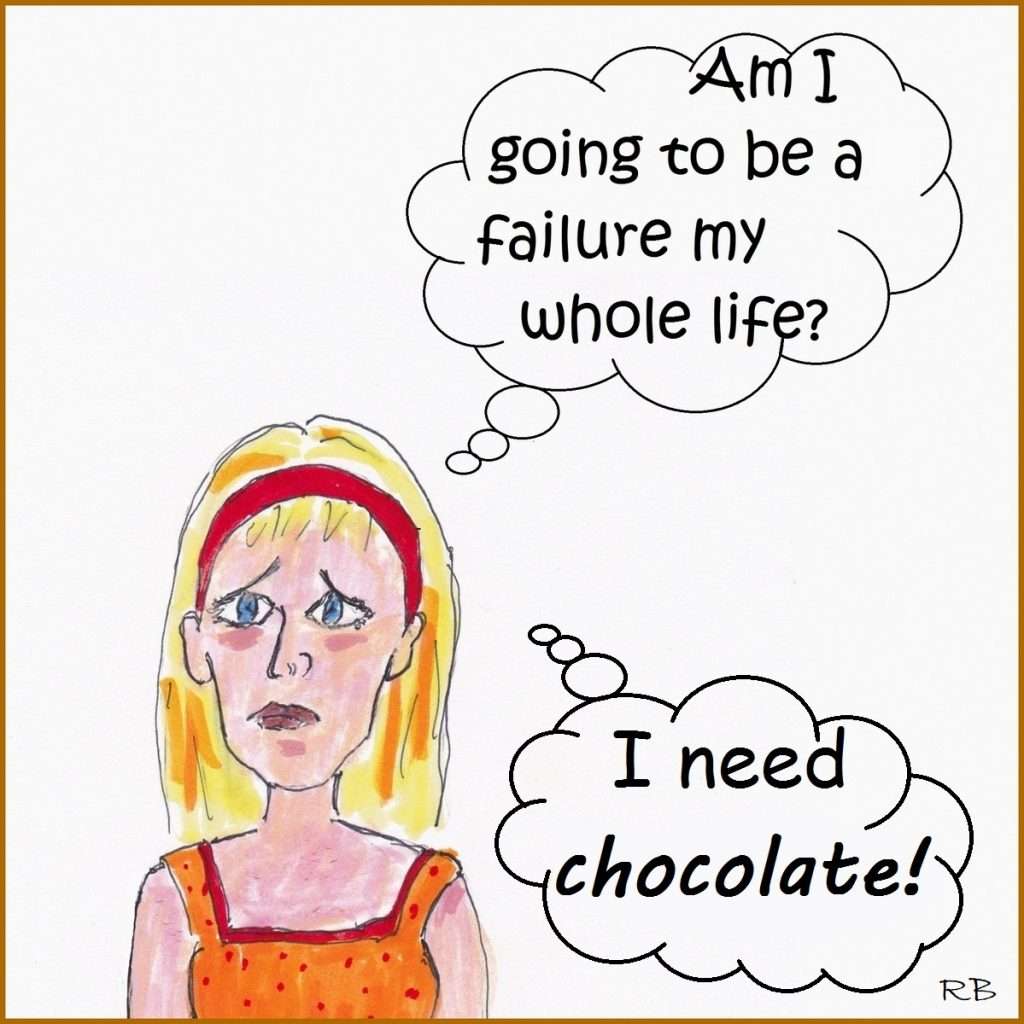 There it was — failure. And on my first day on my first job. I needed chocolate. I bought a Baby Ruth and a Hershey bar and left the store with a fear of failure that would stay with me, drive me, and wake me up at night.

But failure isn’t fatal. I found my path to success, and it definitely was not one that required the ability to memorize the price of parsnips or master the art of the cash register.

October 15, 2021
WANT MORE RUTHI?
Subscribe to my newsletter!
Get latest updates and exclusive content straight to your email inbox.
Give it a try, you can unsubscribe anytime.