My Adventures with Grandma

Grandma was the best playmate I ever had. She turned even the most boring day into an adventure – like the times we were stuck in the backseat of the car for hours on car trips with my parents. Riding down endless country roads to visit kinfolks, it didn’t take long for me to start whining and complaining,

Suddenly, Grandma would sit forward, point at a lonely shack by the side of the road, and in a voice filled with excitement say, “Look! That little house is just the thing for us. Let’s fix it up and live there, just the two of us. We’ll play games all the time, and there’ll be nobody to tell us what to do, what to eat, or when to go to bed. Now, let’s see, what will we need? Hmmm,” she’d pause and I’d jump in with, “a bed, and a table.” 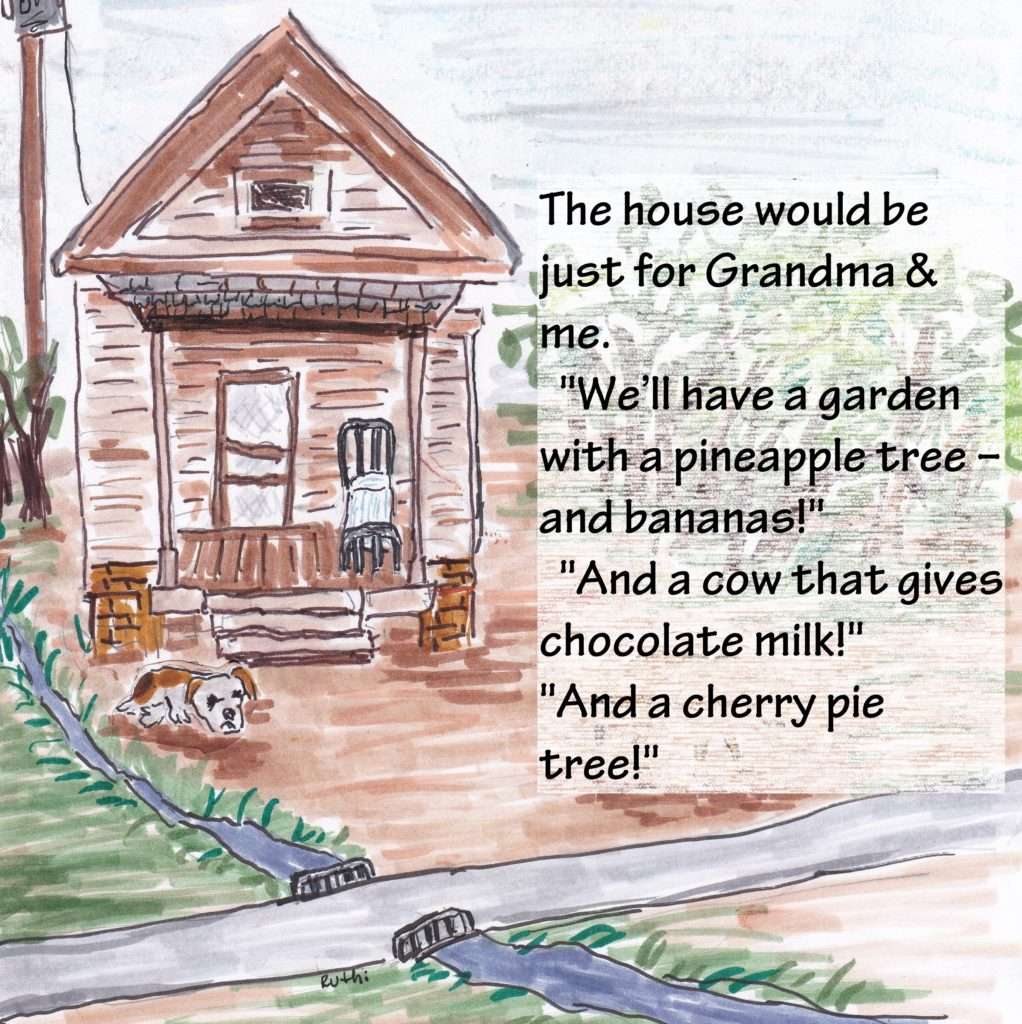 The miles would fly by as Grandma and I furnished our house–a woodstove to cook and keep us warm, two chairs, a dresser, a lamp. We’d have a TV to watch whatever shows we wanted, and we’d never watch the news. Of course, I added a horse–I always added the horse.

Finally, our giggles tapering off, I would lean back in her arms. But the trip wasn’t over. It was time to sing. Grandma knew songs that nobody else knew. “Johnny Wants a Pair of Skates,” or “Billie Boy,” and “William A. Trimbletoes.” We’d sing, at the top of our voices,

~William A. Trimbletoes
he’s a good fisherman
catches hens
puts em in the pins
Some lays eggs
Some lays none
liar liar limber lock
three geese in a flock
one flew east,
one flew west,
one flew over the cuckoo’s nest
O U T spells out~

Grandma lived with us in a room Daddy built especially for her. That room was a treasure chest filled with eighty-five years worth of things to entertain a child. There were albums with pictures, old and new, of family members I’d never even met, and there was a story to go with each picture. There was one brown picture from way, way back when Grandma was a little girl. Grandma told me traveling photographers used to come by the farms and take pictures. The sweet-faced old lady in a sun-bonnet was my Great-Grandma Thomas, a sweet-faced old lady in a sun bonnet, and right beside her was a cute little spotted pig.

“Why did they take a picture of a pig?” I asked. 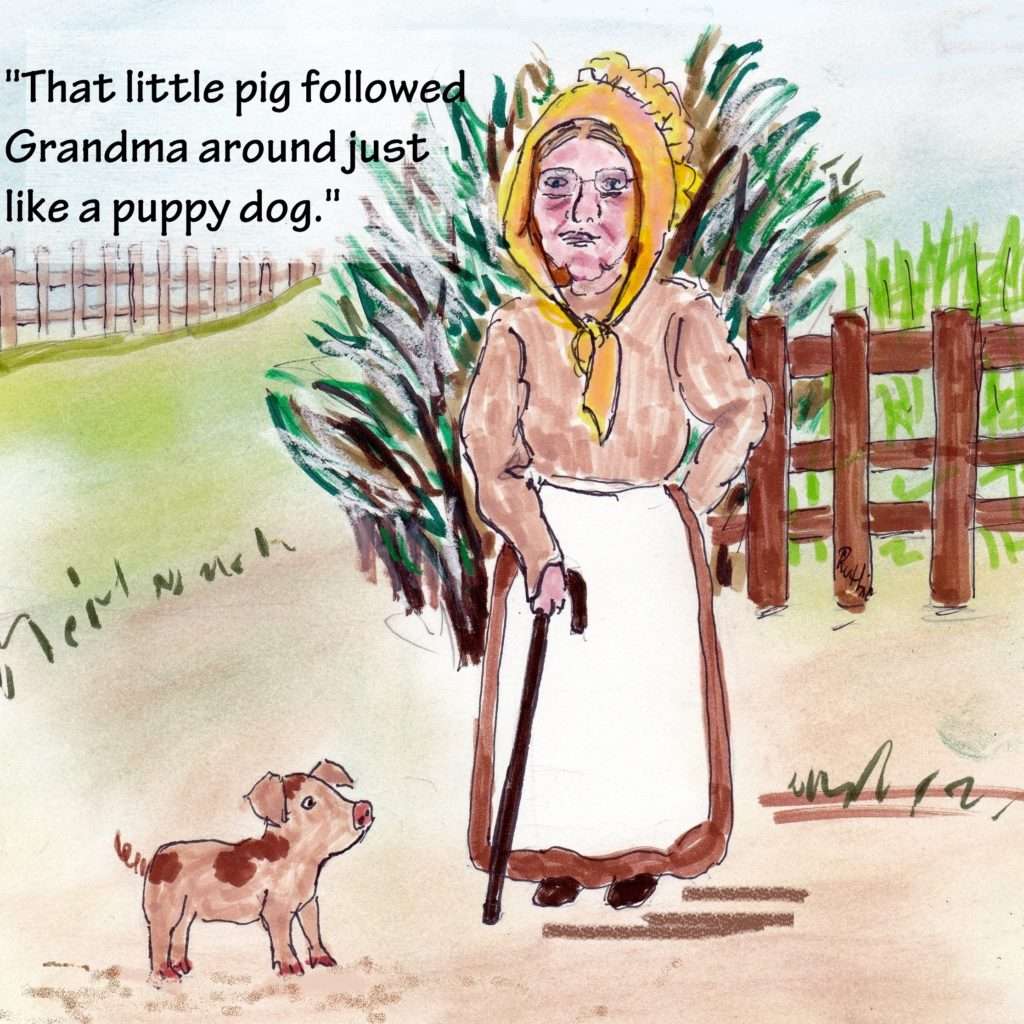 “Oh, that little fellow just loved Grandma Thomas. It followed her around everywhere, just like a puppy dog,” she laughed. “It was the funniest sight. They tried to shoo it away for the picture, but it wouldn’t go.”

“What happened to the pig?” I wanted to know. Grandma looked at me as though it was a silly question, and answered, “We ate it, of course.”

On rainy days, I’d go to her room, and out would come her button box with its hundreds of buttons in every shape, material, and color. 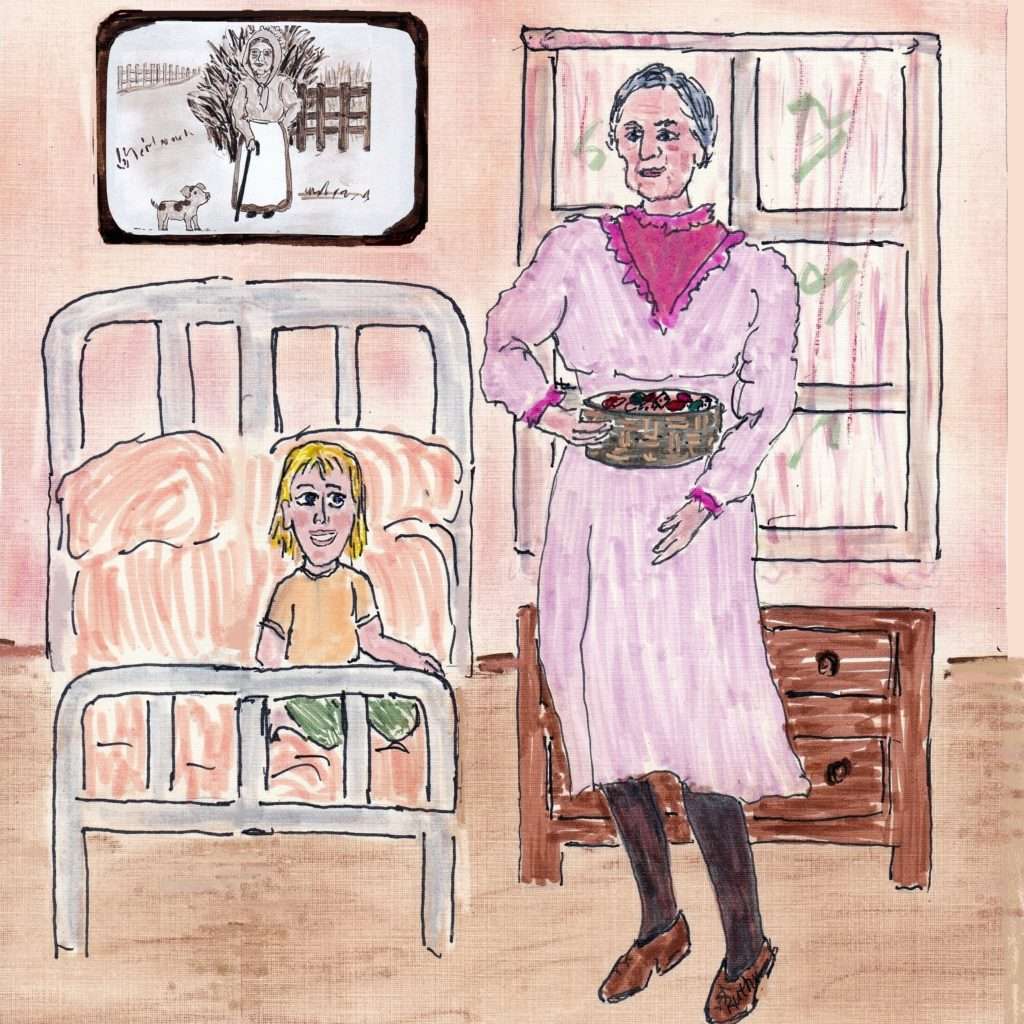 She would thread a needle for me, and I’d sit on her bed for hours, stringing buttons, while she told me stories about when she was a little girl; the time she ran a boarding house and the people she met, or how she met Papa.

On sunny days we might walk up to Smith’s grocery store on the corner for a dime’s worth of penny candy, or take the bus to Prichard and go to Kress’s Five and Ten, where she bought me my very first Sundae. 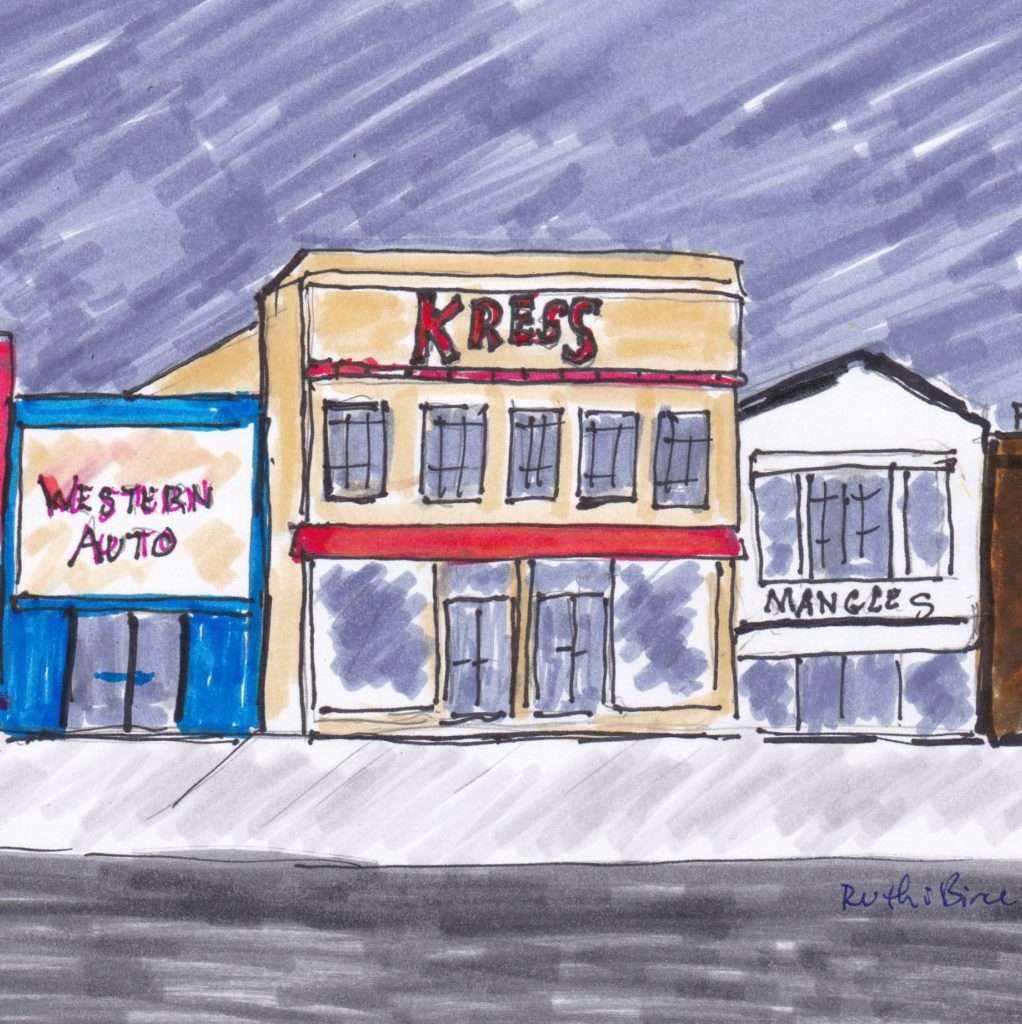 But when I was bad…Grandma had her own way of dealing with a naughty child. She knew a very scary man by the name of Mr. Jack Dobie, and when one of us children was bad she would summon him to come and take us away to . .

I don’t know where, but it surely wasn’t a good place.

When she’d had enough of my bad temper or rambunctiousness, or however I was behaving, I’d hear Grandma call out, “Come get Ruthi, Jack Dobie. She’s being bad. Come on and get her.” 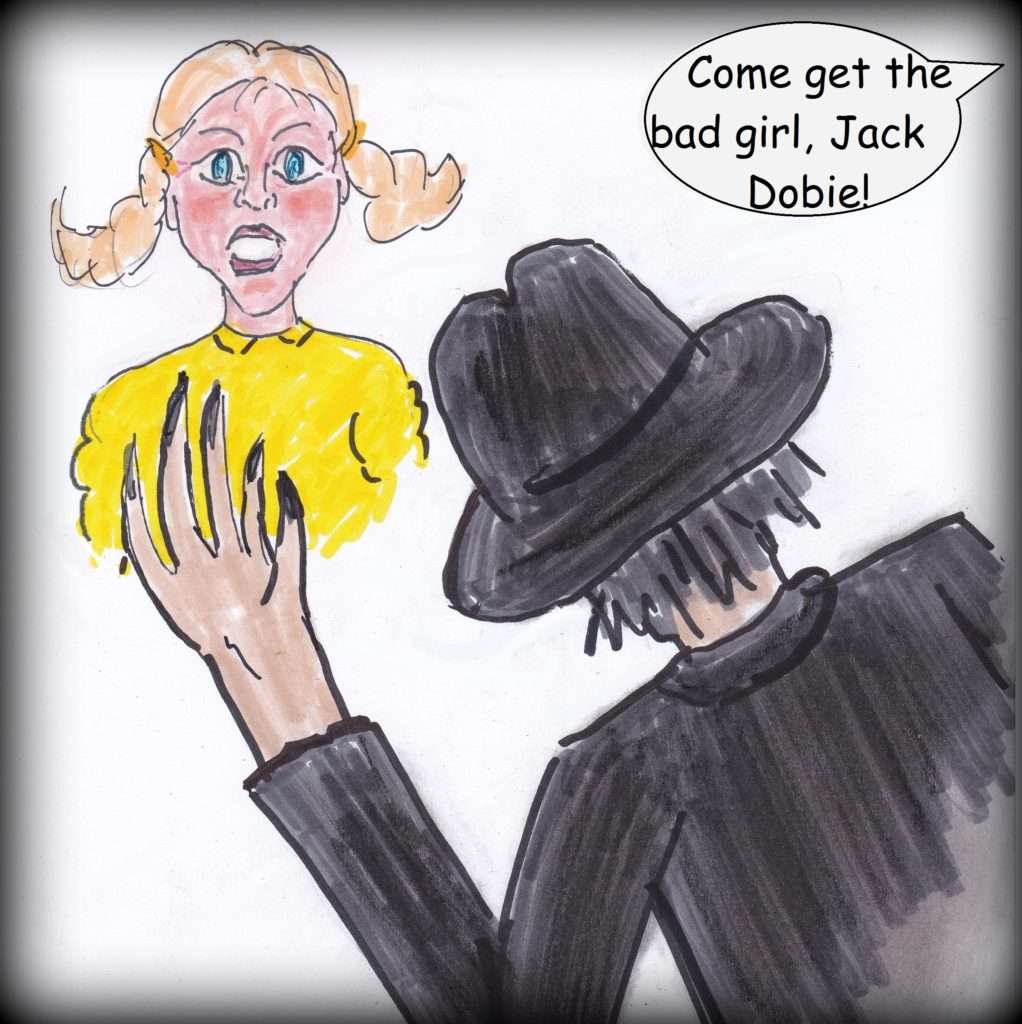 And I’d grab her arm giggling and screaming, “No! Don’t call him! I won’t be bad anymore – not ever. I promise.” Or I’d run to the one place in the house where I knew I was safe from him, Grandma’s bed. I’d jump in and hide my head under her pillow, and yell out, “He can’t find me here, so tell him not to come.” Being scared has never been so delicious.

I don’t know if he took away any other children in the family (I always hoped he’d take my mean cousin Polly), but Jack Dobie never came for me. After some begging and promising to be good, Grandma would always decide I was salvageable, and say, “Well, all right this time. I suppose you’re worth keeping, but don’t be bad anymore.” Then she would call out, “Jack Dobie, never mind coming today. Ruthi’s sorry.” And we’d be on to our next adventure.

Do you have favorite games and adventures with your grandma? I’d love to learn about them.

March 7, 2019
WANT MORE RUTHI?
Subscribe to my newsletter!
Get latest updates and exclusive content straight to your email inbox.
Give it a try, you can unsubscribe anytime.