MOST TREASURED GIFTS — MADE OF LOVE, TIME, & MAKE-BELIEVE

Our most treasured gifts are prized not for what they cost but for how they touch us — and what they were made of. Gifts made of love, time, and make-believe stay with us long after the colorful clutter of wrapping paper and ribbon are put away for another year. Here are four stories about gifts that were treasured.

What were your most treasured gifts — gifts that left you with memories you still cherish?

A BRAND-NEW BIKE FOR CHRISTMAS

The year I was eleven, I was sure I wouldn’t get the gift I most wanted — a brand-new bicycle. And I knew just which one I wanted.

When I was a child, the Christmas season began with the arrival of the Sears and Roebuck Christmas catalog — Grandma called it a wish book. 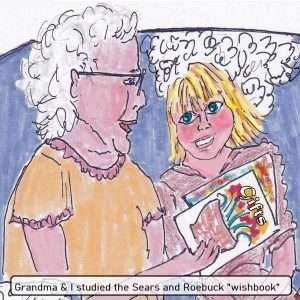 Every year, I took the catalog and draped myself across the big green chair in the living room — the one that tattooed its design on my skin. I scoured and dog-eared the pages of toys, imagining them under the tree on Christmas morning.

I turned to the bike page and there it was — midnight blue with a red seat with white stars and shiny silver handlebars. But I saw the price and I didn’t dog-ear that page. There were other toys to dream of.

Our living room was always beautiful on Christmas mornings. Christmas tree lights rained colors over the gifts Santa had placed just so — nobody knew how to make Santa Claus magic like Mama. (I knew the truth, but Mama and I kept playing the Santa game.)

That year the first thing I saw was the yellow sweater set I’d been wanting (the latest trend). “Mama, this is just like the one I showed you in the store.”

“Santa must have heard you.”

“And he brought a butterfly sweater clip too.”

Daddy asked, “Well? What else did you get?” I glanced at him because he sounded impatient but he was smiling. 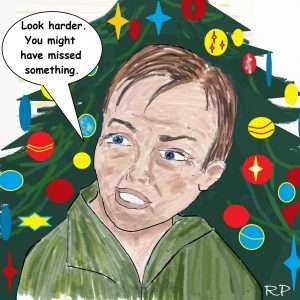 I also had a hula hoop, two coloring books, plus a giant box of Crayola crayons — the box with the built-in sharpener! And two paint-by-number kits with pictures of horses. I loved horses.

Daddy cleared his throat. “Is that all?”

I moved things and looked underneath. “I think that’s everything. Let’s open presents.”

“Maybe you missed something. Stand up and look.”

I stood but I still didn’t see anything else.

Then I did! A brand new midnight blue bike with a big red bow tied to shiny silver handlebars with red streamers.

It was the bike from the catalog! I couldn’t believe it. 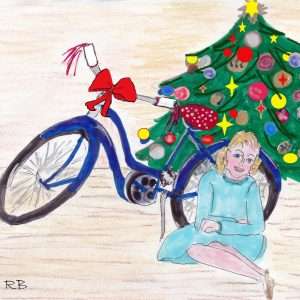 Then I remembered, “I don’t know how to ride a bike.”

Daddy laughed. “Let’s go to the yard. You can learn there where there’s grass to fall on.”

After my first few tries, I hardly fell at all. Riding was even better than I’d imagined. I wouldn’t leave the bike for a minute — even when I went in for dinner.

Before dinner, Mama brought out her Brownie camera and gathered us in front of the tree to take pictures. She wanted pictures of me without the bike, but I wouldn’t let it go — and I still have the photos to prove it.

BUT WAIT! THERE’S MORE TO THE STORY! My brand-new bike wasn’t new!

I didn’t know that until years later when my older sister told me the story.

“Mama and Daddy knew you wanted a bike, but they didn’t have the money. Daddy found a discarded bike in a junkyard. He hauled it to Mr. Parker’s garage and went there to work on it every day after work.

“I saw the bike before he fixed it. You wouldn’t believe it was the same one. He hammered out dents and patched rusted places. One of its tires was salvageable, so he patched it, and bought another tire used. Then he painted the bike to look like new and bought a new seat, and handle grips, and the red streamers.

“Daddy couldn’t wait to see your reaction to the bike. You didn’t let him down. When you saw it your eyes lit up. I know you didn’t notice, but Daddy was more excited than you were.”

That day I learned what a real treasure my bicycle was. I wish Daddy was here today to see how my eyes light up when I think of what he did for me.

My brand-new bike wasn’t new. It was better than new! 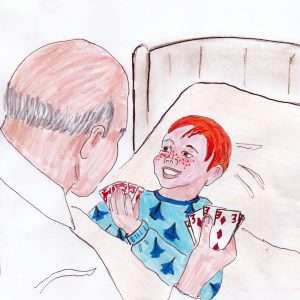 When I was six, I had a strep infection that caused a heart murmur. I was confined to bed for a month. Imagine how that felt for a six-year-old! To top it off, a nurse came every day to give me a penicillin shot!

What could have been a scary and lonely time was made better by two people who gave me the treasured gifts of their time and love. My dad and Grandpa Sam owned a paper factory and running it was hard work. But no matter how tired they were, when they came home they dedicated themselves to making being sick less painful for me.

When Dad got home, he’d come straight to my room with comic books or the funny paper. He’d sit by my bed, talk, and share the funnies with me until dinner.

Our favorite comic was Joe Palooka, the sweet-natured fighter who hated to fight. And Humphrey Pennyworth, Joe’s enormous and always hungry best friend who rode into adventures on a gigantic tricycle. One day Dad came home with an actual Humphrey Pennyworth — a punching bag. I knocked old Humphrey for a loop, though more often than not, he bounced back to bop me on my head. 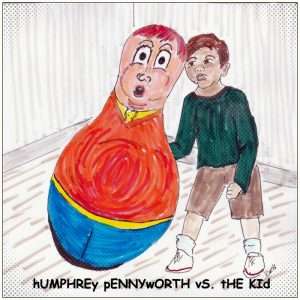 A GAME OF CARDS

After supper, Grandpa Sam came. I’ve watched the movie, The Princess Bride a dozen times. I never get tired of it because Peter Falk, the grandpa reading the story to the boy, reminds me of Grandpa Sam. But my grandpa wasn’t into story-telling. He taught me to play rummy and that’s what we did every night.

Dad and Grandpa Sam’s gifts were time, love, and the security that comes with them.

In 1950, when I was ten years old, we moved from New England to Hawaii — just before Christmas. I was miserable. Hawaii didn’t even feel like Christmas. There was no chill in the air or smell of fires in fireplaces or icy ponds for skating. Even decorating our tree didn’t make us feel better.

Then, a week before Christmas, we saw Mom and Dad huddled together, whispering. Then brought home some wooden orange crates and mysterious packages. He put them in the garage and told us to stay out. He spent the next days out there. We could hear sawing and hammering and tried guessing what he was up to.

Christmas eve, we found out. When we came home from shopping with Mom, there was a giant snow-capped candy cane beside our walk. It had lights and a sign that said, “Welcome to Christmas land.”

Our front door was covered with red paper and tied with a big bow to look like a gift.

Daddy met us at the door. He was wearing a Santa hat. In the living room, under a window overlooking palm trees, was a red-brick fireplace — the orange crates transformed and painted to look like bricks. Red and orange paper flames shot up from cardboard logs. The mantle held candles and greenery.

For Christmas Eve dinner, Mom made toasted pumpkin soup and roast beef. Then, we played games and sang carols until it was time to hang our stockings by our fireplace and go to bed.

Christmas morning, our stockings were filled. We had hot chocolate and sat around the still-blazing fire to open our gifts.

Dad and Mom gave us a treasured gift for Christmas — and one of my most special memories. 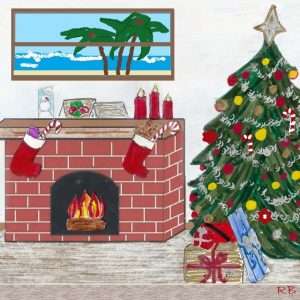 My best gift ever? The gift to let my imagination fly. My parents had the vision to see possibilities for fun in ordinary things. And they took the time to show me how to make-believe.

When I was a child, vinyl go-go boots were the latest fad. My friends and I all wanted them, but my parents said I was too young. The other fad was the Etch A Sketch. I did get that — and played with it for exactly a day. 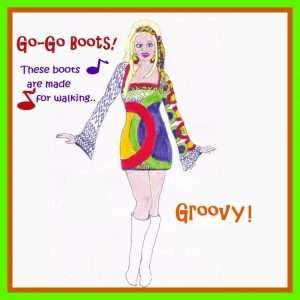 But my parents showed me the fun of applying imagination to ordinary things — my non-gifts. My most treasured non-gift was my box filled with make-believe. It was the empty carton from the new fridge that my folks gave each other for Christmas. Instead of having the box carted away, they kept it. On Christmas morning, it was in our living room, along with the other gifts.

I laughed and climbed in for the ride to the moon. 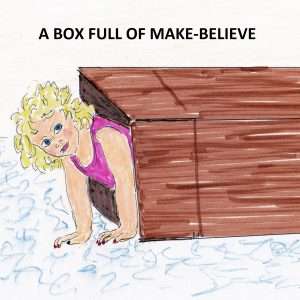 Before the box finally collapsed, it was a fort, a hide-out from rustlers, and even my own place to go when I was mad at everybody. My parents helped me develop the imagination to see the possibilities life offers.

As we face the problems and pressures of these times, these most treasured gifts serve an important purpose. Receiving them today or remembering ones we got in the past makes us smile and lifts our spirits. Our better-than-new bicycles, dads and funny papers, grandpas’ card games, fake fireplaces, and empty boxes filled with make-believe were gifts made of powerful stuff — love, time, and imagination. When we pass them on, they become the treasured gifts that lift the spirits of other people.

January 3, 2022
WANT MORE RUTHI?
Subscribe to my newsletter!
Get latest updates and exclusive content straight to your email inbox.
Give it a try, you can unsubscribe anytime.