LOOKING AT OLD PHOTOS & REMEMBERING STORIES FROM MY CHILDHOOD

A rainy day is perfect for sitting on the front porch, looking at old photos & remembering stories from my childhood. I grew up in a family chock full of crazy characters — like Aunt Minkie, for instance — actually my great, great Aunt Minkie. She was in her nineties and feisty as all get out. Mule-headed, ornery, and cantankerous were some of the words Daddy called her. She is a leading character in many of the stories from my childhood.

I picked up a creased picture of Aunt Minkie standing beside her old Hupmobile. Most Aunt Minkie stories happened when she was tearing up the 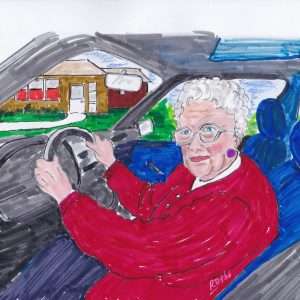 roads in that old car — she was still driving because nobody was brave enough to tell her she was too old. In the following picture, she is standing in front of her farmhouse and holding a hoe. I laughed because it brought to mind one of the funniest stories from my childhood.

AUNT MINKIE AND THE BIBLE SALESMAN

It happened on a sunny September afternoon. Aunt Minkie was out raking leaves. She stopped when she heard a car coming up the road. She leaned on her rake and lifted her glasses to get a good look. Not many vehicles passed her way — the part of Florida wasn’t on any tourist map. There was nothing in all of Greensboro to interest strangers — nothing to see except farmhouses, tobacco barns, shacks, and the all-in-one store, Fletchers. It sold gas, groceries, appliances, hardware, animal feed, clothes, and shoes.

She squinted to see through the dust stirred up by the car. No, it wasn’t a neighbor or the mailman — probably some fellow who took a wrong turn at the fork, she thought and went back to her raking. The car stopped just past her house and backed up. A man opened his door, flashed a big smile, and waved.

“Wherever you’re headed, you’re on the wrong road.”

Yep. He’s lost all right, she thought and called out, “Wherever you’re headed, you’re on the wrong road. Turn around. You have to go back and take the other fork.”

But he wasn’t turning around. He was getting out, still grinning.

She thought he hadn’t heard her, so she cupped her hands to her mouth and yelled, “Turn around. You want the other road.”

He didn’t get back in the car. Was he deaf?

Then he opened the trunk, hauled out a big black case, and headed up the steep bluff to Aunt Minkie’s yard.

“I’ve already got two of whatever you’re selling.”

“Oh, fiddle! A drummer,” she muttered under her breath. She called, “Get on back in your car. I’ve already got two of whatever you’re selling.”

But he kept coming — and smiling.

“Mister, I told you I’m not buying. Save yourself a climb up the bluff. I don’t have time to jaw with you. I’ve got honest work to do.”

Doing the steep climb, his face turned red, but the smile stayed as big as daylight. That grin was starting to rankle Minkie.

She muttered, “Here you come grinning like you’re kinfolks come to call, and I don’t know you from Adam’s housecat.”

When he reached the top, he wiped his face with a handkerchief and crooned, “Good afternoon, Ma’am. Isn’t it good to be alive on such a glorious day? Let me introduce myself. I’m Jackson Lee Holman. May I ask your name?”

She turned her back and swatted at leaves, sending a cloud of dust his way.

“Don’t need to see it. Whatever you’re selling, if I needed it, I’d already have it. If I don’t already have it, I don’t want it. So, I’d thank you for getting back in your car and driving on.”

“Mister, I’m over ninety years old, and that’s about as close to God as you’ll find.”

“Ma’am, I can’t leave without sharing with you this great blessing I brought. He walked toward the porch. “If you don’t mind, I’ll set my case here.”

“No! You keep hold of your case. I don’t need any pamphlets or samples, and I’m too busy to hear about what you’re peddling.”

“No, Ma’am. I don’t have pamphlets.” He sat the case on her porch and opened it. “I don’t come as a salesman but as a servant of the Lord. Ma’am, I’m here to bring you closer to God.”

“Mister, I’m over ninety years old, and that’s about as close to God as you’ll find.”

“One Bible is plenty, and it’s all I can read at a time.”

He held up a big Bible, big enough for a pulpit. It had a fancy gold cover with a picture of Jesus in the center. “Here, Ma’am. God’s word.”

“I don’t need more than a Bible. Go on now. You’re done. Get off my property.”

She gave him a look as hard and cold as steel.

“Ma’am, look here.” He thrust the open Bible at her. “Scholars from all over the world studied the scrolls and found errors in our old Bible. Just look at Luke 2. It….”

“I know what it says in Luke.”

“But you’re wrong,” he said, his smile flashing brighter. “What it says is….”

She gave him a look as hard and cold as steel, and her knuckles were white where she gripped the rake. That look had made some of the most brutal men in Gadsden County back off.

He tried to stifle a shudder and tried a different line. “What’s wrong with me today? I haven’t even shown you what I guarantee your old Bible doesn’t have — the pictures. This Bible includes forty of the greatest Christian paintings in the world to inspire you and stir your spirit.

“My spirit is stirred by the Bible I’ve got.” She shook her rake. “Git on out of here.”

The rake missed his leg with her next swing at the leaves. He jumped back and closed his coat around the Bible.

“I have a mission to bring you a message. Won’t you listen?”

You wouldn’t have thought a little old lady could move so fast.

Aunt Minkie came toward him holding her rake like a club. The man grabbed his case, jumped away, and headed for the bluff. The sticky molasses smile was finally gone.

“I can see you’re no Christian,” he yelled.

That did it! Aunt Minkie took off after him. You wouldn’t have thought a little old lady could move so fast.

He made it to his car seconds ahead of her — so close he felt the breeze as her rake whooshed by.

Even the police didn’t want to tangle with Aunt Minkie.

Once out of her reach, he opened the window, stuck his head out, and yelled, “I’m calling the police on you.”

That was a laugh. Anybody could have told him even the police didn’t want to tangle with Aunt Minkie. They all remembered the story about what happened the last time a patrolman tangled with her. He tried to give her a ticket for running the stop sign by Fletcher’s store. 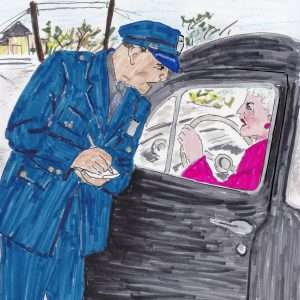 Minkie shook her finger at him and said, “You can just put up your pencil. I’m not taking your ticket. You should be ashamed! The county put that sign there as a way to take folks’ money. We never needed it, and I saw both ways clear as day, and nothing was coming.” Then she took off and ran over his foot!

Caught up in the stories from my childhood, I lost track of time. The rain had stopped, the sun was shining, and I was still sitting on the porch. Neighbors started to come out of their houses. I got some curious looks as I said some of Aunt Minkie’s lines and laughed out loud. It’s okay. I love rainy days — perfect for sitting on the porch, looking at old photos & remembering stories from my childhood.

September 1, 2022
WANT MORE RUTHI?
Subscribe to my newsletter!
Get latest updates and exclusive content straight to your email inbox.
Give it a try, you can unsubscribe anytime.