WHAT BASEBALL FANS TEACH US ABOUT TRUE LOVE

Want to know if it’s true love? Give it the baseball fans test.

I discovered this test for true love one Sunday in a surprising place — church. It was Washington Nationals Day. As I walked in the door I knew something felt different — there was a buzz of excited anticipation in the room. On a closer look, I saw that this was no ordinary Sunday.

The buzz came from the preacher and his congregation of baseball fans, all decked out and logoed in Nats’ red, white, and blue. They were going to see their team play baseball! 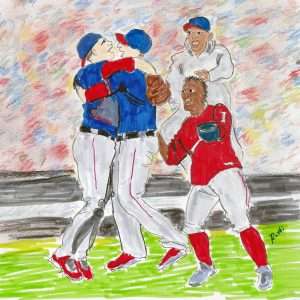 The sermon was about — what else? Baseball! Baseball, baseball fans, and what we can learn from them about devotion — or true love.

To understand where this is going, you need to know that at the time the Nats were coming from a seven-game losing streak.

The preacher stood to give the sermon. But he didn’t start with the 2022 team. He harked back to another team — the 2019 Washington Nationals.

Remember them? Who wouldn’t love them? They won the World Series! They hugged. They were adorable. They had the Baby Shark. 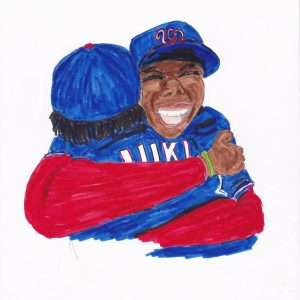 And that was the point — they weren’t the test of the fans’ devotion — or of true love.

After the fourth, fifth, sixth, and seventh losses, the merely infatuated fans didn’t pass the test. True love is steadfast. True love made that congregation dress up in Nats regalia on this steamy D.C. day and climb to their seats in the ozone of Nationals Park. They wanted to be with their team.

And the Nats lost. It was sad, but the fans didn’t lose faith. There’s always next time. Their team would be back. For true baseball fans, it’s a game of faith and hope as well as love.

After a few baseball references, I have to admit I drifted off into my own thoughts. 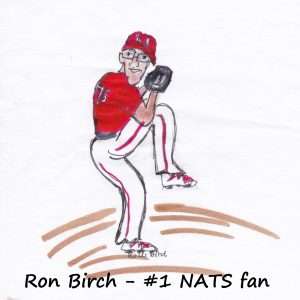 I went to memories of my husband, Ronnie who died last March. He was a true baseball fan and my true love.

When we met, Ronnie was like the 2019 Washington Nationals. He was at the top of his game as an attorney and litigator. And he was adorable — the man of every dream I’d ever had. He was tall, handsome, exciting, and elegant. That was one of the first things I’d noticed about him. Ronnie didn’t merely walk — he danced. And he was funny. I could listen to his stories forever and never get bored. I fell in love.

Ronnie fell in love too. He told me I was beautiful, clever, and quick — he even said I was almost as much fun as a guy. Of course, I was young then, my hair was perfect, and I had on a really cute dress.

Most of the time love was easy — times of travel, rides in limousines to Broadway shows, dining on real caviar. 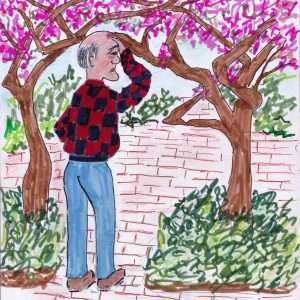 Even life’s challenges were easy and we laughed at them — like the low tree branches in the garden that always took Ronnie by surprise. It was like we were playing and winning our World Series over and over again.

Soon enough, Ronnie found out loving me wasn’t always fun. Being anywhere near me when I have a cold is not fun! It’s way less fun than sitting in terrible seats and watching the Nats play their eighth straight losing game. When I have a cold, I look a hundred. My hair is a rat’s nest plastered to my head. My eyes are red and wet. And there is no makeup to tone down my neon-red nose. Plus I’m grumpy.

Ronnie first saw me with a cold when I came downstairs, wheezing and whining, and wearing a sloppy stained bathrobe. But he was there for me. Even though a baseball game was on, he left the television and came to me. “Poor baby,” he said, “Come here.” And he came with open arms. Even I wouldn’t have hugged me.

“Stop,” I whined. “It’s too hot in here. You turned up the heat, didn’t you?” I pushed his arms away and fanned the front of my ratty robe.

He laughed — he had such a sweet laugh. “Come here. You’re not ugly. You’re beautiful.” And he held me in a hug that could only come from true love.

We played as though we believed we could win

Our love was steadfast through colds, heart bypasses, knee replacements, and pneumonia. We knew we could win. Then we met an enemy we couldn’t laugh off or beat — emphysema, a mean, degenerative disease — a thief empowered by Ronnie’s years of smoking.

It was weird. Soon after we met, I had a dream. In my dream, Ron was standing outside of his office building as he often did when he was thinking through some complex legal issue. And he was smoking, as he always did. I walked past him, proud, almost prancing, my head high, my skirt bouncing. He looked at me and flicked his cigarette away, but the wind caught it. It hit me and I broke into pieces, but not messy shards. I broke into surreal panes that stayed vertical as they slid slowly to the sidewalk.

But that wasn’t going to happen! I wouldn’t shatter. We kept on playing life as though Ronnie was the 2019 Nats and I was his steadfast fan. We gave living everything we had. We played to have fun. We played as though we could win.

Ronnie rode in a wheelchair, held his oxygen tank, and we lived. We toured galleries and museums. We went to zoos. We fed flamingos. We played with Mr. Magoo, our dog. We sat in the garden, had picnics, and played scrabble or poker (I cheated). 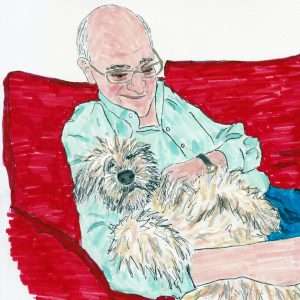 When he couldn’t go out to the garden anymore, we sat together on the couch, held hands, and watched Jeopardy or old movies on TV.

In time, the mirror made him sad. But he could look through my eyes and see the man he’d always been — a man who didn’t merely walk but danced.

True love is the answer

If you’re not a baseball fan, you may think the fans are crazy to go out in the heat, scramble for a parking space a mile away, and sit in the heat to support a team that’s losing. True love is the answer. Win or lose, they are happier in the stands watching their team play, even in ozone seats in the sweltering heat, than anyplace else.

Sometimes Ron worried that I did too much. He said I needed a break. We should get help. No. I was too selfish. Whatever I did wasn’t just for him. It was for me. It made me happy because happiness was being with Ron Birch — even if it just meant doing nothing but sitting on that couch beside him. That’s how you know it’s true love.

So, that’s how I learned what baseball fans teach us about true love — from a sermon — although I’m not sure this was exactly what the preacher was going for.

August 1, 2022
WANT MORE RUTHI?
Subscribe to my newsletter!
Get latest updates and exclusive content straight to your email inbox.
Give it a try, you can unsubscribe anytime.