How to Keep Love Alive — Laugh

People ask, “How do you keep love alive?” What they really want to know is if it’s more trouble than it’s worth. If you really want an answer — this afternoon I was in the garden with my two loves, Ron, my husband and a Wheaten terrier named Mr. Magoo. And we were laughing. 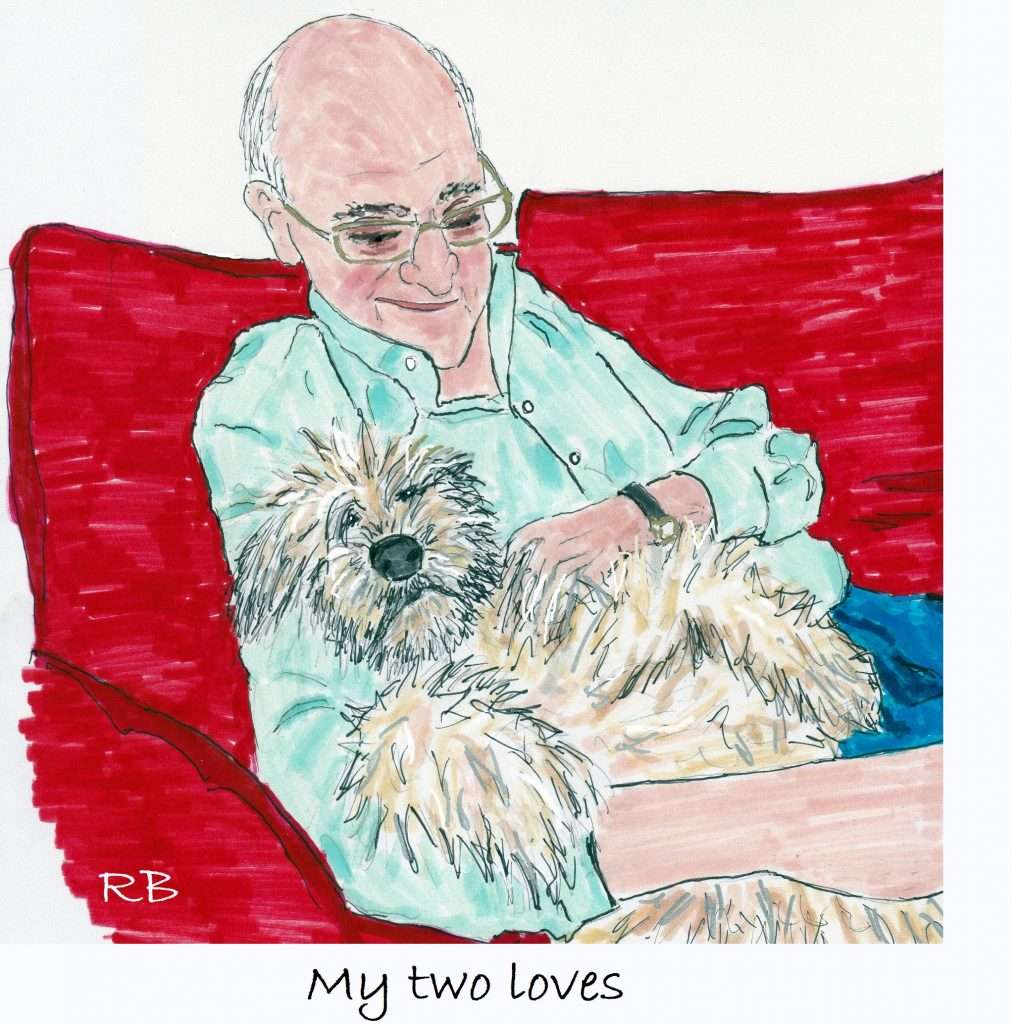 If that’s true, Mr. Magoo is a block of wood, a sneaker, five cicadas, four rolls of toilet paper, a bar of soap, asphalt roofing tiles, three sponges, a plastic flower pot, seven dog toys, and the mail — including a check from the IRS. (After the IRS letter, I thought Ron might kill him.)

Mr. Magoo’s rule is this — if he can reach it and can get it in his mouth, he should eat it. Once I remove the danger, what can I do but laugh? He’s funny. 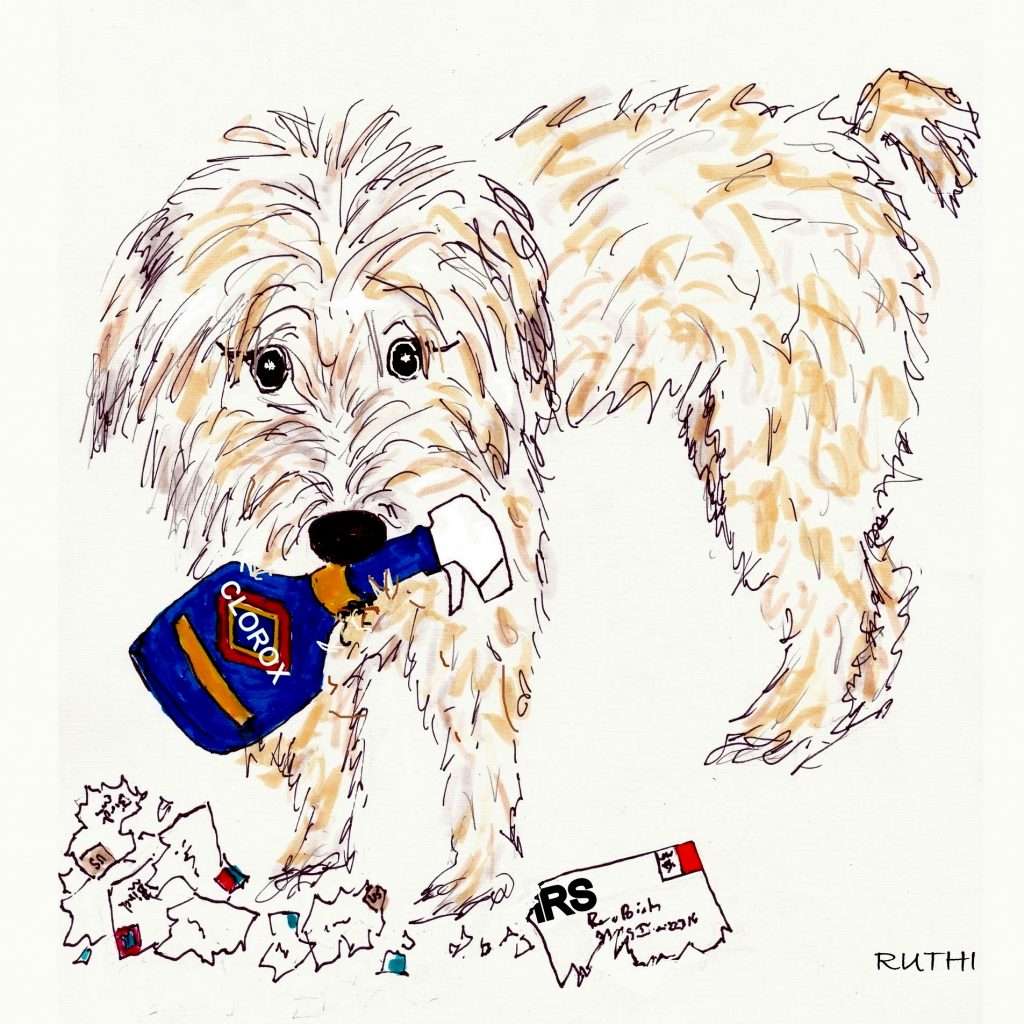 I can trust Ron not to eat the mail or cicadas. But Ron is a six-foot man living in a five-foot world. Keeping him safe from tree limbs, pipes, sharp edges, hot stoves, and other immovable objects ready to whack him is a never-ending job.

Ron was bleeding again — I could tell from the bang in the kitchen — followed by a scream, “Dammit!”

He was standing by the sink holding a wet linen napkin to his head when I got to the kitchen. He took the towel away to show me the gash.

“So the range hood got you again, huh? That thing is relentless.” (We’ve lived in this house with that same hood for nearly ten years. It hasn’t moved.) 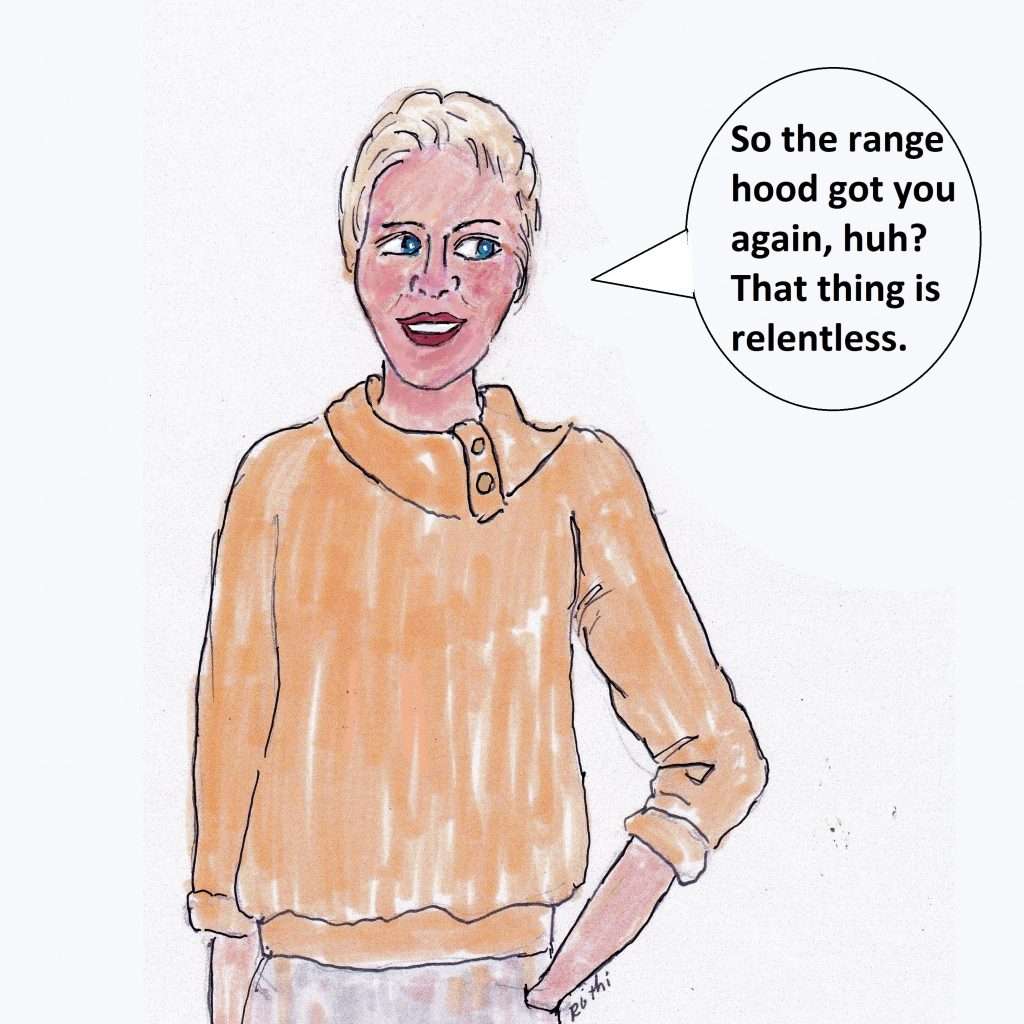 “I was bending down to check the spaghetti sauce. The sharp edges…. How bad is it?”

I wiped the blood away and looked. “It’s not as bad as some but it looks like it hurts.”

“That hood is dangerous. I’m replacing it.”

“Fine. Replace it. But for now let’s Ron-proof it.” I had an idea. I bought magnets, glued them to my measuring spoons. When I finished the hood was ringed with dangling spoons. 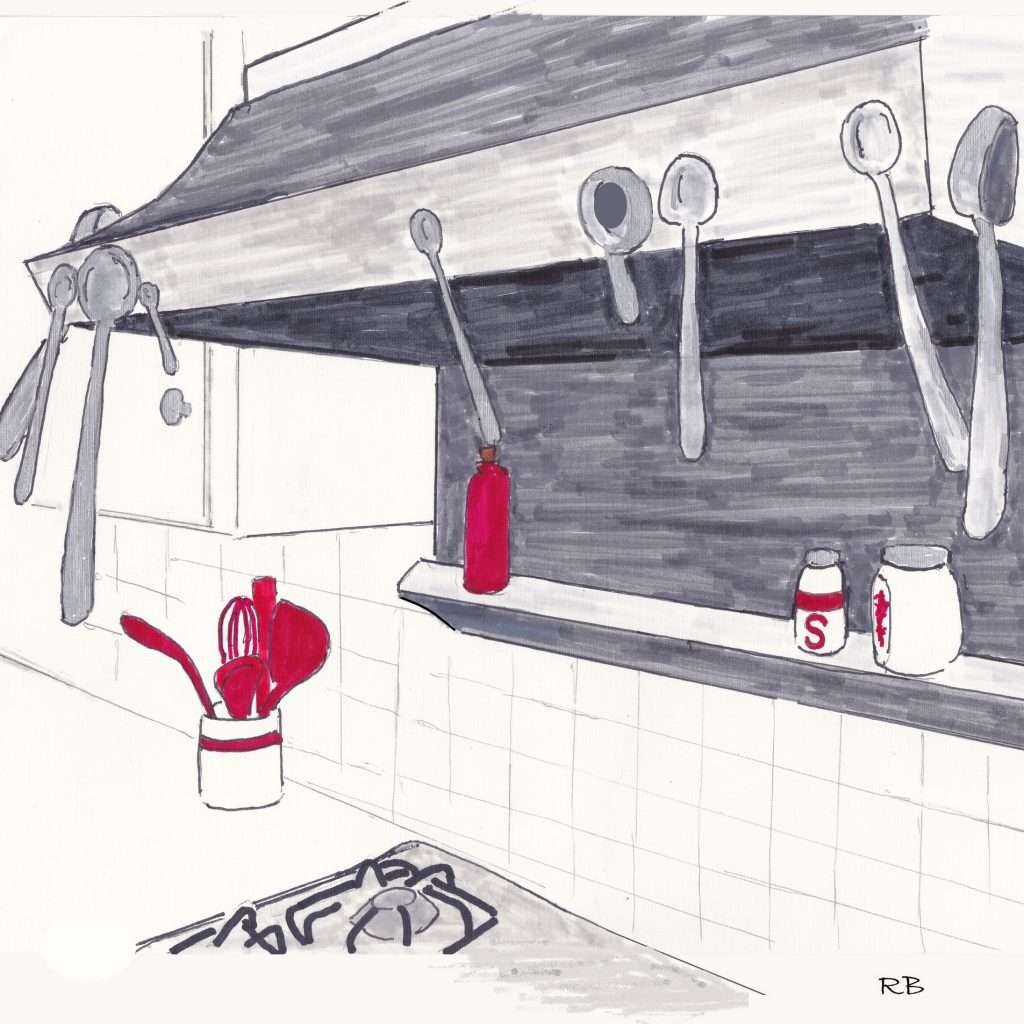 “Now it can’t sneak up on you. Bend over and you’ll hit a cup or spoon and send it clanging to the floor.”

So far it’s working! A few spoons have gone airborne, but Ron hasn’t hit his head on the hood since.

SCENE 3 — He Forgot to Duck

Our house is two-hundred years old. The basement is a minefield — from low ceiling over the stairs to the low-hanging timbers, ducts, and pipes — Ron rarely comes back from there uninjured. And there is apparently no number of bumps and bruises that will convince him these objects are not at fault.

In our garden are apple blossom trees. Their branches twist and weave together to make a Zen setting. Some interlace five feet off the ground. And…

This morning Ron came in holding the top of his head — again. “Am I bleeding?”

“Let me see. What happened?”

“I went to bring in the paper. That limb!” 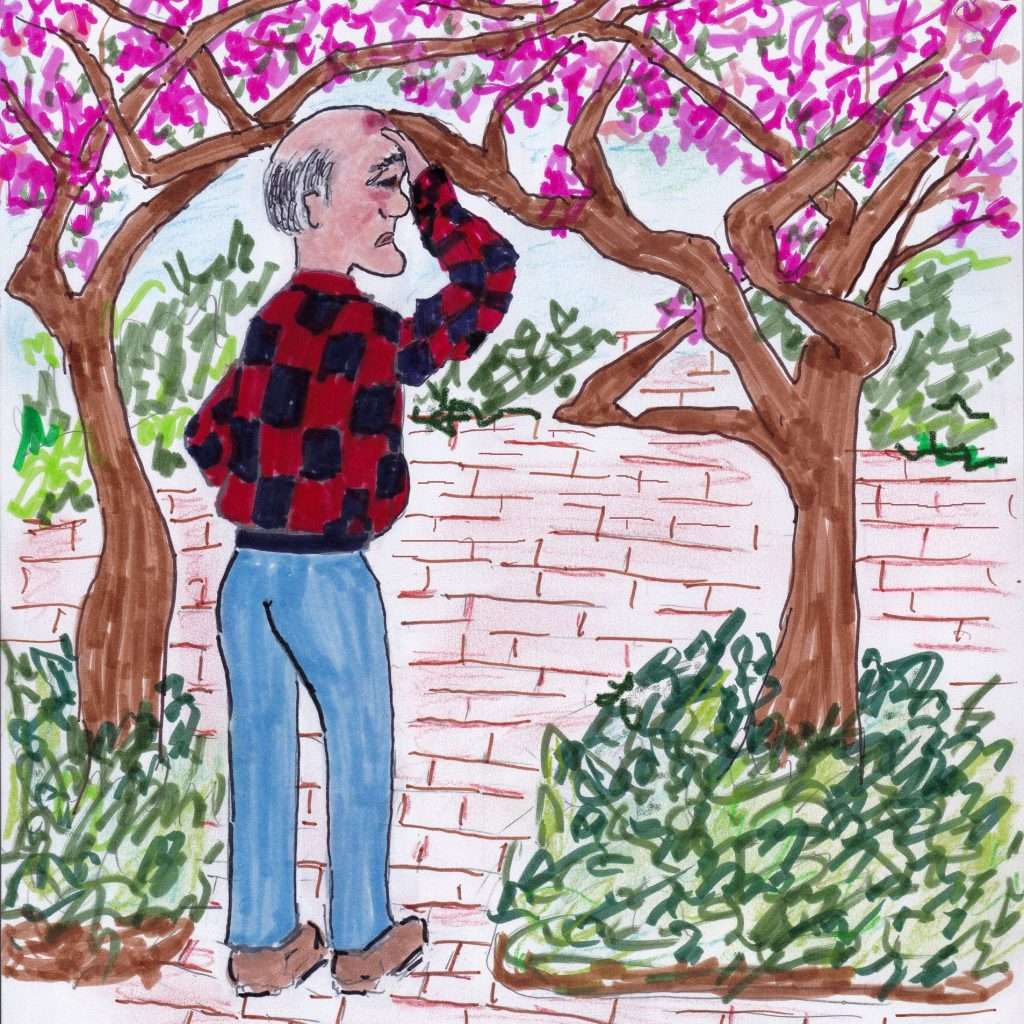 “You gave yourself a good whack. I told you. Just put your hand on the branch when you go under and you won’t hit it. It works. Try it.”

“Why didn’t you just bend over today?”

“I was thinking about work. Anyway, it’s too low.”

“I suppose we could cut them all down.”

He gave me a dirty look. “Never mind. I’ll just bend over.”

SCENE 4 —  The World Should Be Logical and on Time – But Keep Love Alive!

Physical threats aren’t the only things that shake Ron’s world. A planner, he keeps a meticulous calendar and expects the world to keep it — ten o’clock means ten, not a minute after. He can’t understand why the world — and his wife — are unscripted, ever-changing, and spur-of-the-moment.

“The man who sprays the trees.” 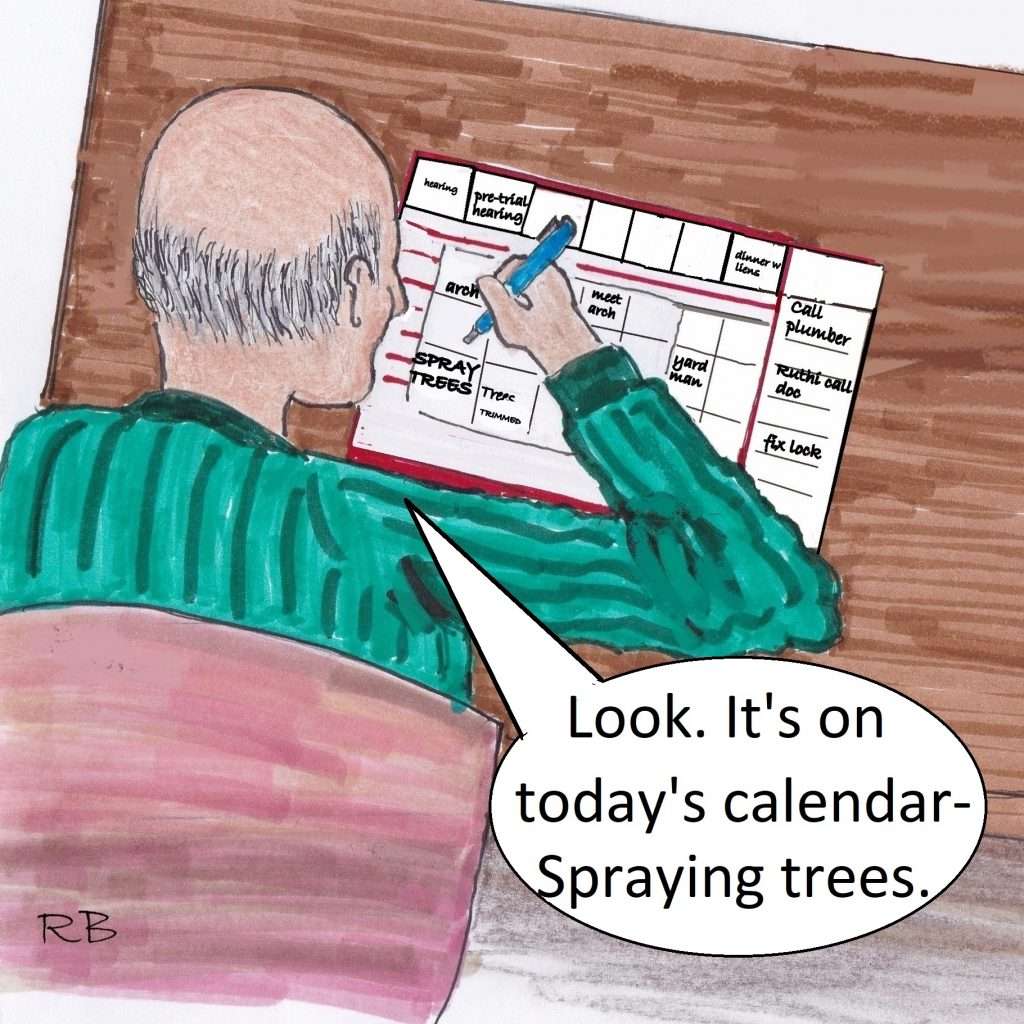 “Why didn’t you tell me he was on the phone? I needed to talk to him.”

“There was nothing to talk about. He changed the time.”

“It matters. What time tomorrow?”

“I can’t stay home all day to wait for him.”

“In the future, tell me when he calls.”

“Did you write the check for him?”

“Did you record it?”

He looked in his checkbook. “You didn’t subtract.”

“How will we keep up with how much money is in the account?”

“Call the bank. I’ll bet they have people — like Oompa-Loompas — who do nothing all day but subtract.”

Just then, Mr. Magoo came in carrying Ron’s lightly-chewed new shoe. When he saw us, he dropped the shoe and settled down at Ron’s feet, the totally innocent dog. 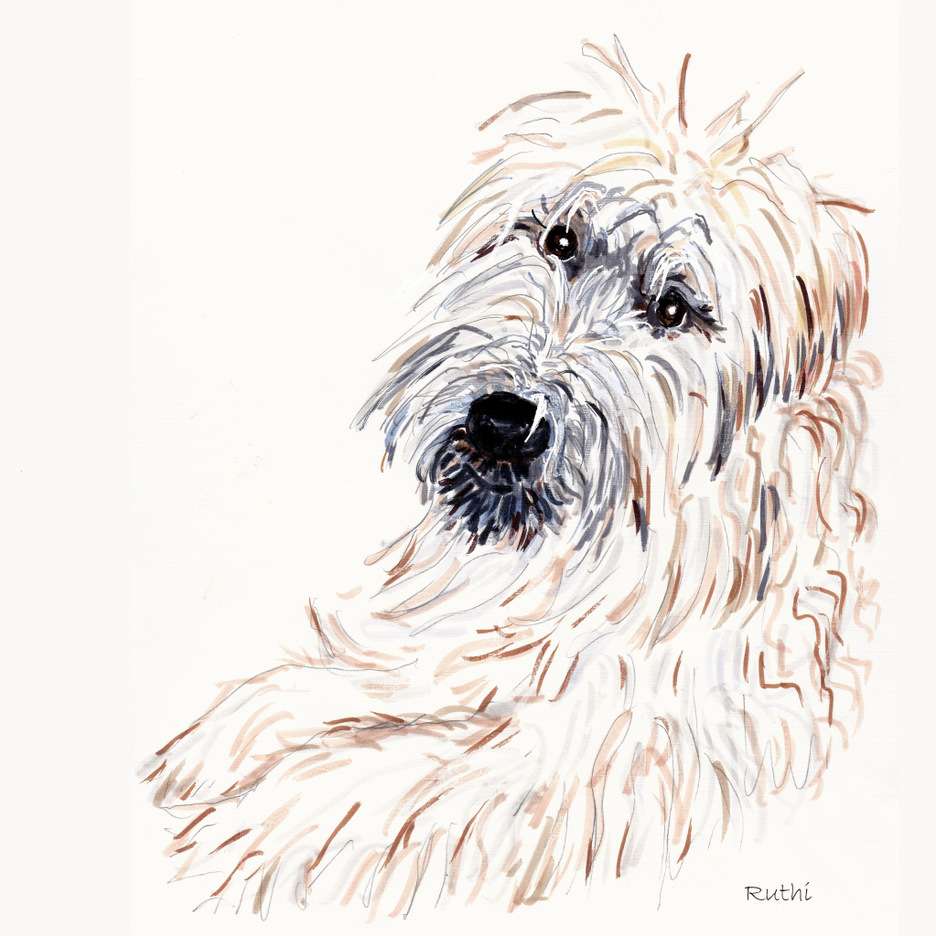 Mr. Magoo looked into his eyes with the most love ever given in a look. 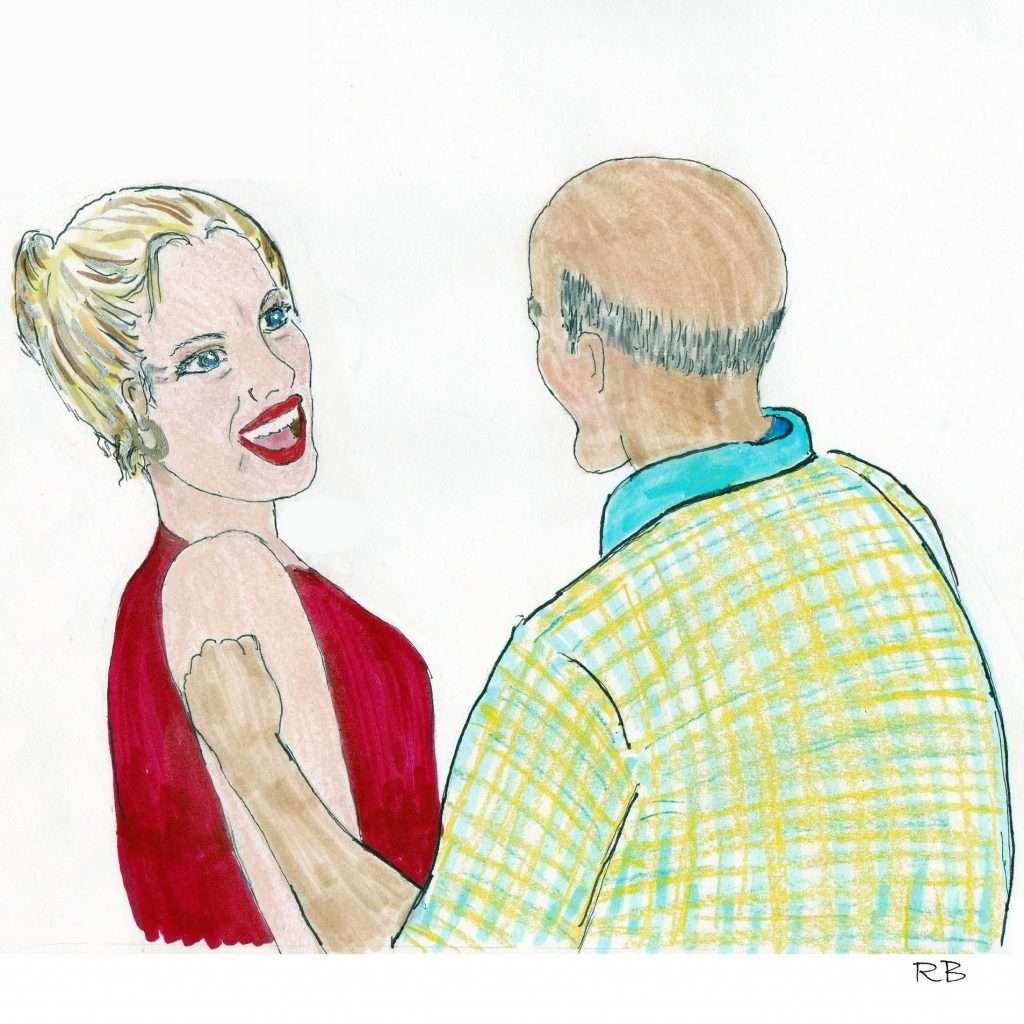 Laughing is one way we keep love alive and we have a lot to laugh at. Mr. Magoo, the unruly free spirit, is funny — when I’m not trying to keep him alive. Ron is the most brilliant and fascinating man I’ve ever known. He’s funny because with his ironclad grasp of the law, logic, Shakespeare, and prime numbers, there’s no room left in his brain for keeping up with pipes and limbs. And I … I’m the unscripted straight man.

August 17, 2021
WANT MORE RUTHI?
Subscribe to my newsletter!
Get latest updates and exclusive content straight to your email inbox.
Give it a try, you can unsubscribe anytime.