How to Find Love — Ask Directions & Have a Sense Of Humor

I married a litigator and I love him. He’s a great litigator because he never walks into court until he has asked and re-asked every question (he never trusts the first answer), checked, and rechecked every detail. It’s made him successful and it drives me crazy — especially when we are going anywhere in a car.

Say we’re taking a drive to the beach.

We’re on the way to – nowhere in particular.

We’re coming to the traffic light where the highway dead-ends at the beach road.

A choice has to be made. Choices without information are agonizing.

“It doesn’t matter. Either way.”
The light turns red and we stop.

I muse, “I remember a good custard shop somewhere on this road – Pop’s, I think.”

“Which way do I turn to get there?” he asks.

“I don’t remember, but it doesn’t matter. There are lots of places. Let’s just drive along the water.”

“Which way?” he asks again.

A family in bathing suits and flip-flops is crossing the street.

The father trudges across in front, lugging a beach bag and dragging a spirited little boy.

The wife is similarly loaded down with a baby carriage and pouting girl.

Slowly, he turns. Inch by inch, he rolls down his window.

He sticks his head out and calls to the man, “Hey, there’s a Pop’s Custard somewhere around here. Do you know which way?”

The man stops in the middle of the road, and calls back, “What?”

I imagine his wife rolling her eyes behind her dark glasses.

Their green light changes to yellow. The man is still staring at Ron.

Ron shouts, “POP’S CUSTARD STAND – which way is it?”

The man yells back, “I’m not from here.”

The light has changed. The wife is screaming and dragging the little girl. Horns are blowing.

The man looks at the red light and the cars in horror and gallops on, almost losing the boy.

Ron sees a new group lining up to wait for the light to change.

Ron makes the turn but he’s uneasy. “Should I pull into a gas station and ask?” 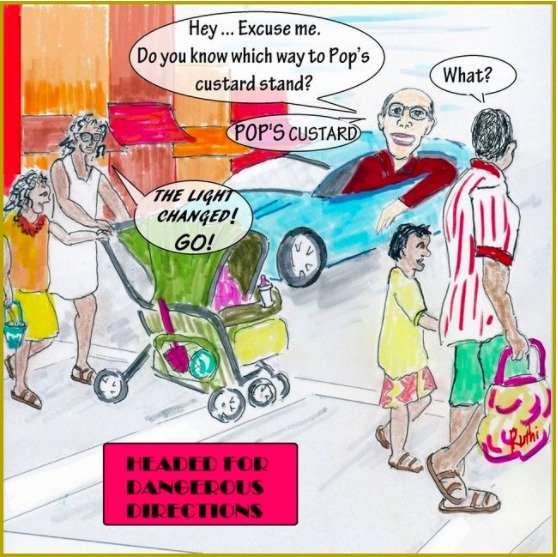 Another time, we were in Chicago and decided to go to the Art Institute.

We were driving to the museum through the howl and swish of rush hour (it’s always rush hour in Chicago).

“The doorman said to take Washington. Have we missed it?” Ron asks. “Catch a street sign.”

“We’re on Washington and we’re headed toward Michigan Avenue.”

“Which way do I turn when we get there?”

“It’s five or six blocks ahead, and you don’t turn on Michigan. You turn right on South Columbus.”

“The institute is on Michigan. Are you sure we don’t turn there?”

“No. We pass Michigan and turn right on South Columbus.”

“We need the route to the parking lot.”

“Once we turn on South Columbus, there’ll be a sign.”

“I’m sure. I have a map with the directions.”

“Show me,” he says as he turns his head away from the traffic swooshing around us.

The car swerves towards a bus.

A man in a convertible is on Ron’s left. Ron sees him and …

Slowly, he turns. He rolls down his window, inch by inch, and I think, ‘We’re going to die!’

Ron honks and waves to get the guy’s attention, and yells, “Hey, is this the way to the Art Institute’s parking lot?”

The convertible speeds away.

“South Columbus is the next block. Turn right.”

There are people standing on the corner. Ron sees them.

Slowly, his hand is moving toward the button to roll down the window.

We arrive at the lot and I exhale.

I wish I’d been there. But Ron’s friend John was there and told me about this one.

The two men had just finished a meeting on Connecticut Avenue and were headed to another meeting at the new Palm restaurant, that had just opened on 19th Street.

They reached N Street and John started to turn West.

Ron stopped. “I think it’s the other way.”

“No. I’ve been there. It’s between Jefferson Place and N.”

John smiled. It was always fun when Ron asked directions.

A man in a business suit was standing on the corner.

“He probably knows the Palm.” said Ron, as he walked up to the man who wore very dark glasses and carried a white cane.

John bit his lip to keep from laughing out loud.

“Can you give us directions to The Palm restaurant? It’s on 19th Street.”

The man held up his hands in a bewildered gesture and started to back away.

John quickly grabbed Ron’s arm, thanked the man, and dragged Ron to the Palm, laughing all the way. 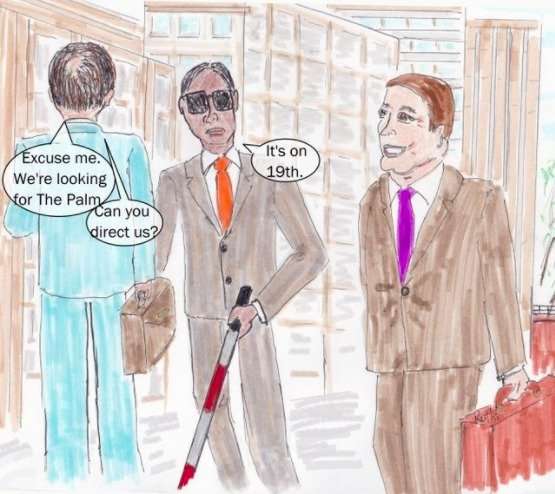 August 21, 2020
WANT MORE RUTHI?
Subscribe to my newsletter!
Get latest updates and exclusive content straight to your email inbox.
Give it a try, you can unsubscribe anytime.