How To Be Successful In Business: Set Benchmarks and Take Responsibility

I don’t know what I expected, but when I graduated from college I learned that reaching a goal isn’t the end, but is followed by a question: what now? A few weeks ago I wrote about the panic that set in when I didn’t have the answer.

I’d always dreamed of a career, but I didn’t know how to start.

Without an answer, I froze. Once I thawed a bit, I started down a circuitous road that eventually led me to find the career in which I belonged, business development in the staffing business. My purpose was to find jobs for people.

I liked this business and my new goal was to be successful in it. When I found a job for my first candidate, it was one of the most exciting things I’d ever done. But my elation at reaching the goal was quickly replaced by panic and another question: Can I do it again? Maybe it was an aberration…maybe a lucky accident. Then I did it again. I found a job for my second candidate. But, again, doubts and questions came.

I’d grown up poor and wanted to be successful more than anything. If you’ve ever been afraid of failure, you know the feeling. However hard you run from it, the threat follows you. No matter how far I got, I could always see it just behind me, pushing me. I had to accomplish more! But what if I couldn’t? 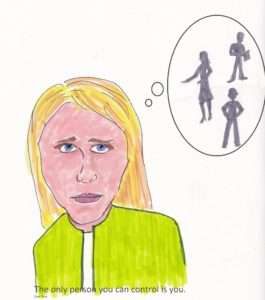 Panic comes when you feel out of control.

I panicked because I felt out of control. But it wasn’t just a feeling. I was out of control! My success was linked to the success of other people, candidate and client, and I couldn’t always predict what they would do. They might not show up for interviews. They could change their minds about what they wanted, turn down jobs, quit jobs, or get fired. I couldn’t control the other people, so how could I control my fate?

My answers came from Petain Street, the blue collar neighborhood where I grew up. There were two simple principles made me successful in my business and laid the foundation for my company.

LESSON #1 The only person you can control is you.

I had the power to make my goals happen because I could control my own actions. To reach my goal, all I had to do was:

I focused my energy on the action steps I could control. I couldn’t make the employer hire my candidate or a candidate take a job, but I could control how many times I picked up the phone and made a sales call. And if I called enough employers, one would eventually hire from me. Reaching my goal came down to a simple formula. 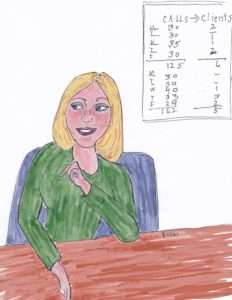 I set a benchmark for action steps, my calls, at 30, and every day, for years, I talked with at least 30 employers. It was simple and it worked. From that day, my success and my income grew.

Of course, I still had days when I wanted to tear my hair out. Deals fell through, work was one problem after another, and nobody did what I expected or wanted them to do. But hitting my benchmarks gave me a small “win” and the energy I needed to keep moving forward, plus ultimate control. If I hit them consistently, results would come.

“It’s my fault.” That’s a hard sentence to say. But it empowers.

Mistakes happen. Plans fail. We have goals we don’t reach. The temptation is to say it’s not our fault and there are lots of places to put blame – the weather, the Metro, bad information, a lack of communications, poor training – and the other guy did it. But blaming other culprits can’t fix it, won’t teach you how to avoid it in the future, and gives your power to the other person.

Early in my career, I learned a hard lesson. A candidate turned down a job I’d spent days finding for her. I fumed. She had wasted my time, led me on, embarrassed me, and so on. Once the whining was over, my boss pointed out how and when I could have avoided the problem. If I’d just asked a few questions, I’d have known it wasn’t the job for her.

The lesson brought back one of Daddy’s lessons that I’d forgotten. “If it’s the other guy’s fault, you can’t fix it.” I didn’t forget them again. They made me take responsibility for the mistakes I made in my career, and I made my fair share. But I felt stronger when I went back to where I went off the track – I knew I had the power to fix the problem or avoid it next time.

These two common-sense principles simplified a complex profession for me and allowed me to take control of my own success.

June 15, 2017
WANT MORE RUTHI?
Subscribe to my newsletter!
Get latest updates and exclusive content straight to your email inbox.
Give it a try, you can unsubscribe anytime.