How My Aunt Pauline Invented Recycling for Christmas

My Aunt Pauline invented recycling for Christmas. That’s because she knew a secret — by recycling, she could make sure her Christmas tree was the most beautiful in all of Prichard, Alabama every single year. We didn’t actually call it recycling because when I was a kid, we never even heard of the word — except about Coke bottles. Back then, you could take empty soda bottles to the store to recycle and the cashier would give you two cents each for them — the big bottles brought three cents. 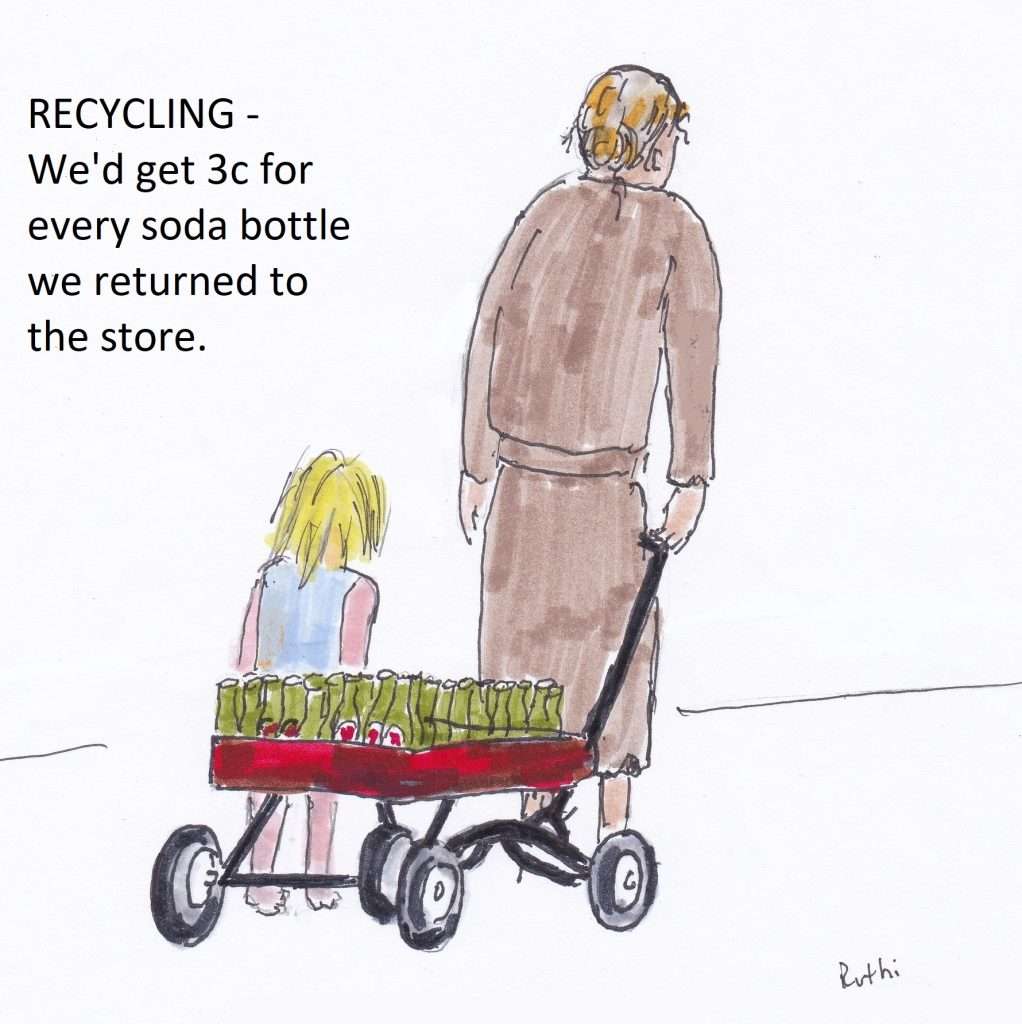 But Aunt Pauline didn’t invent the recycling of Coke bottles. She invented the recycling of silver tinsel for her Christmas tree so it would always be the shiniest and showiest one in town.

“Icicles are what makes the tree,” she said, as she plugged in the Christmas tree lights for us to see the full effect of the tree we had just finished decorating. 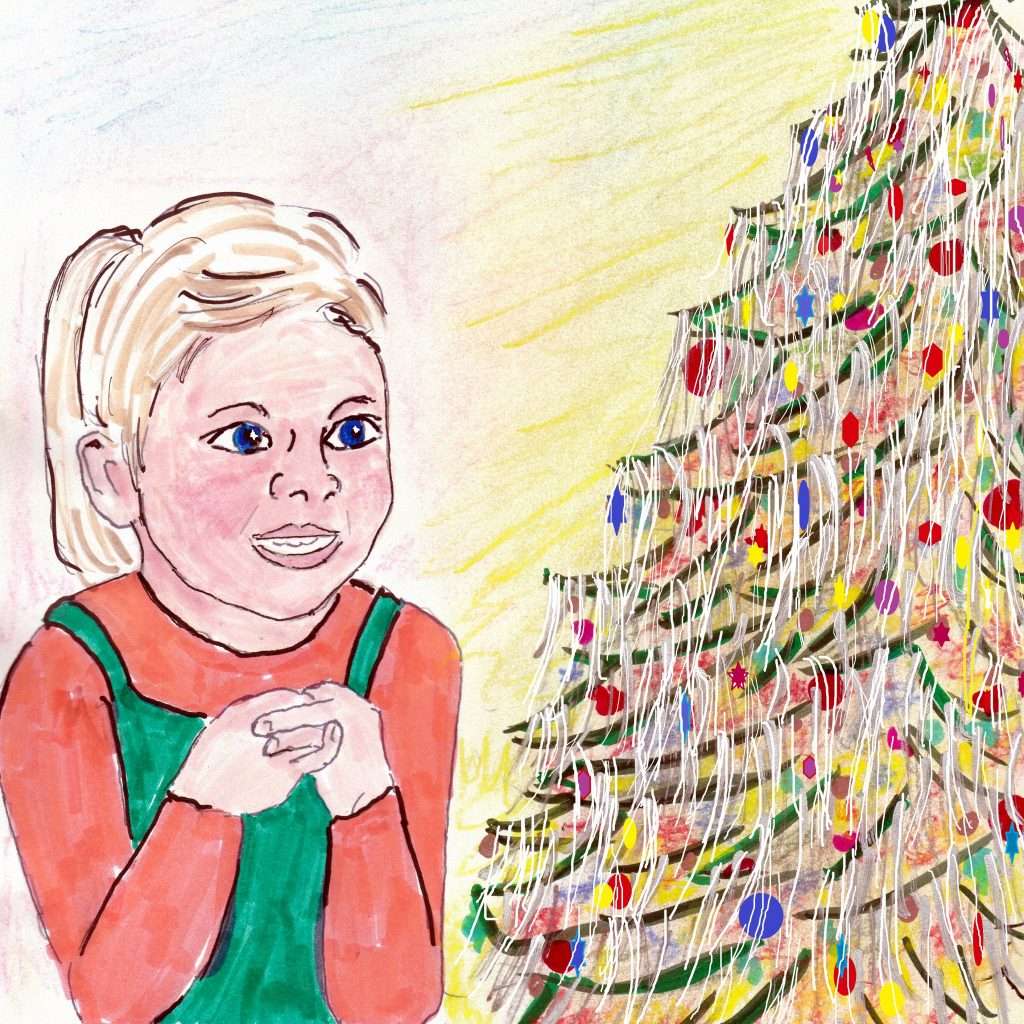 I was eight years old and proud that I was finally big enough to have the honor of helping my aunt decorate her prized Christmas tree. Aunt Pauline was a personality as shiny and exciting as her decorations, starting with her bright red hair, which was always fixed just so. “When you have red hair,” she often said, “people notice. You can never come out without having it styled.” 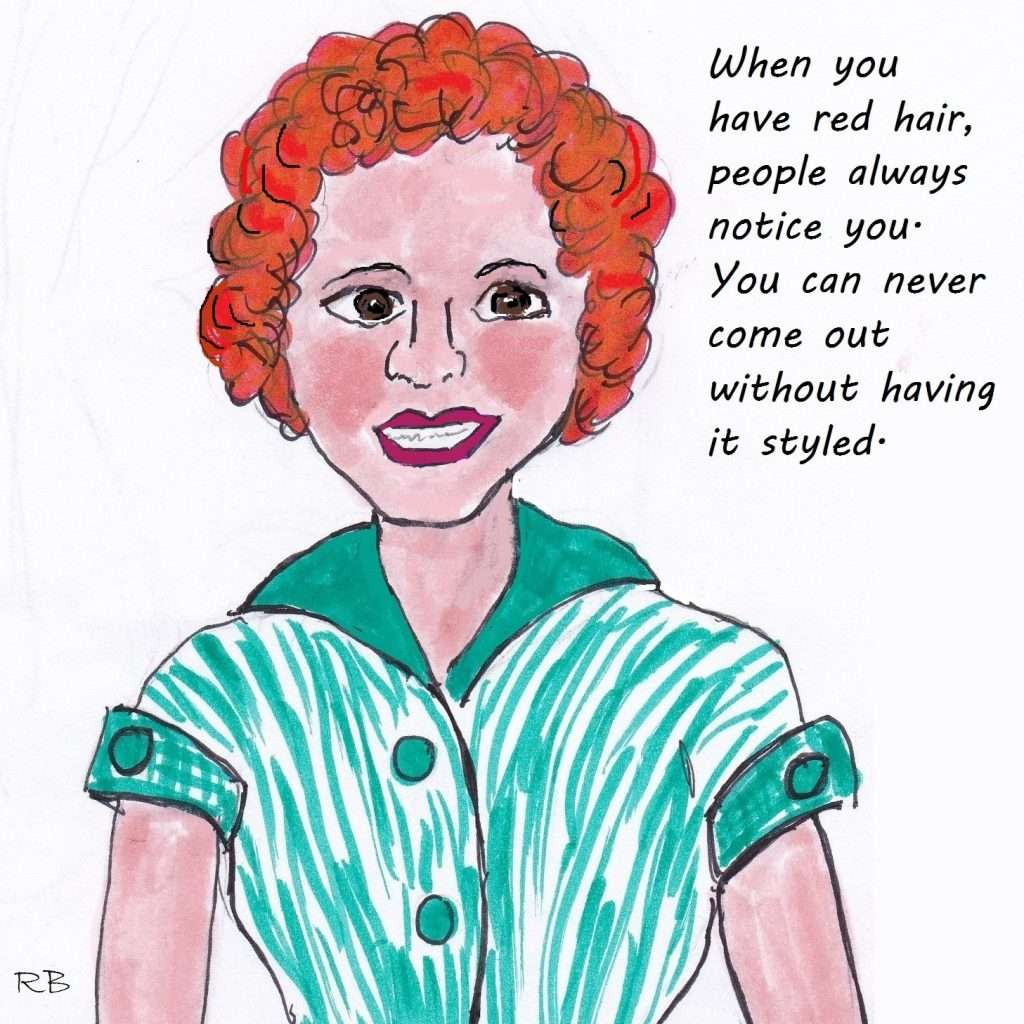 That morning, I’d jumped out of bed, thrown on my clothes, and was at the breakfast table in minutes, antsy to get going. But no matter how big a hurry you were in, you couldn’t eat hot grits fast. I finally finished and ran around the corner and all the way to Aunt Pauline’s house.

The tree, with strings of lights already wrapped around it, filled the front corner of the room. And Aunt Pauline stood surrounded by boxes of ribbons, bows, and colored ornaments wrapped in newspaper.

ORNAMENTS OLDER THAN I WAS: RECYCLING FOR CHRISTMAS

“You can unwrap the ornaments,” she told me, “but be careful. Some of them are older than you are and they’re fragile.”

I unwrapped red, gold, silver, purple, yellow, and pink glass balls and bells. “How come there aren’t any green ones,” I asked.

She finished hanging a big red bell with gold stripes on a high limb and turned to me. “You don’t want green ornaments because you wouldn’t be able to see them. Colors are what make the tree. Now you can help me hang the ones you can reach. But don’t hang the same colors next to each other. Mix them up so they’re even. 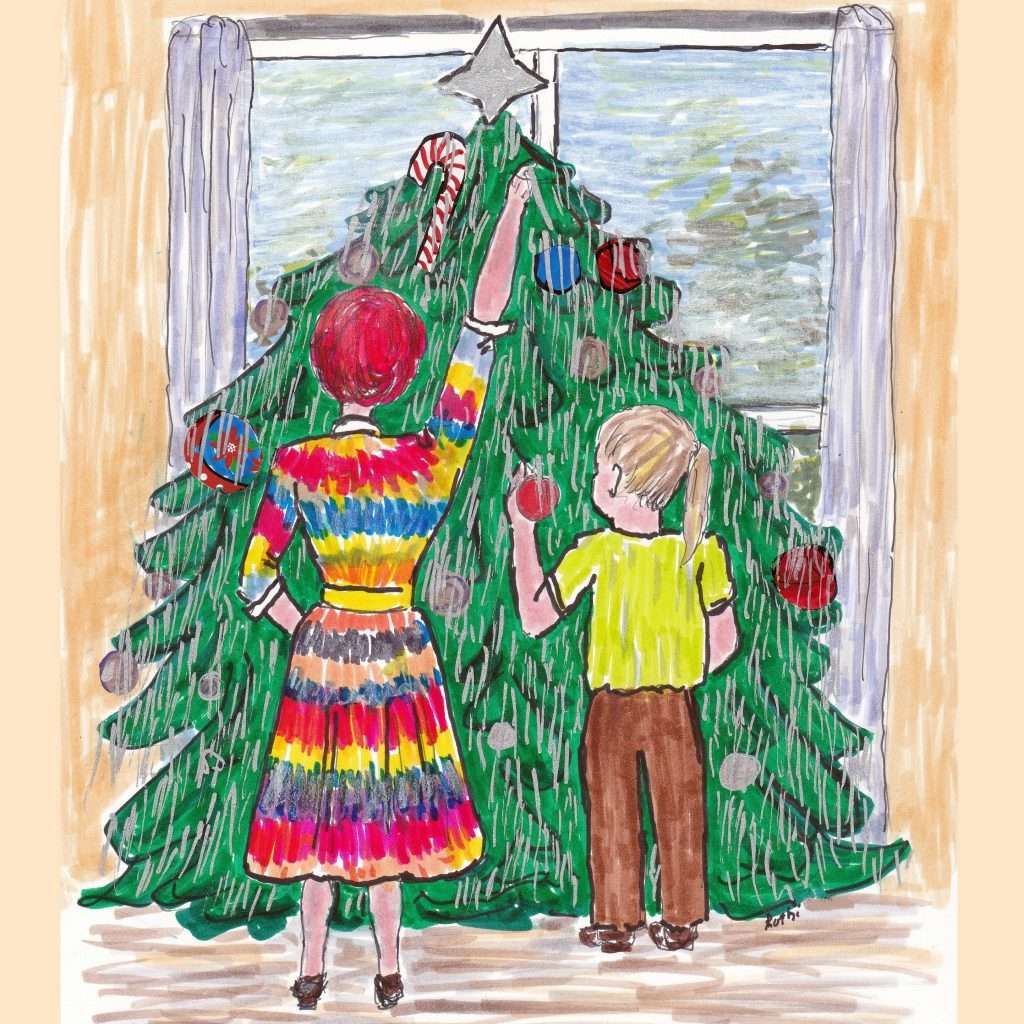 RECYCLED ICICLES BETWEEN THE PAGES OF THE LOOK MAGAZINE: RECYCLING FOR CHRISTMAS

When the boxes were empty and the ornaments hung, Aunt Pauline stood back and appraised the tree. Once she approved the placement of each ornament, she smiled.

“Not yet. Now we do the most important part. Open that box and hand me the Magazine on top. I gave her the five-year-old Look Magazine and she opened it to a page where there were a dozen ribbons of silver tinsel laid in a row.

“Why do you have icicles in your magazine?”

“To save them so I can use them again.”

“Grandmama gets new ones in a box. It just costs a nickel.”

“A nickel and you have a paltry few icicles. I save mine and then add to them year after year, so I have plenty — and icicles are what makes the tree.

“During the war, the stores didn’t have icicles or ornaments or lights because aluminum was needed for ships. People had to make do for Christmas with drab decorations. But I had lights because I always saved them. If you keep them in their original boxes they will last for years.

“Even during the darkest times, my tree was lit up, bright and beautiful. With the lights and the icicles, it was a vision, and people came to see it. They drove by and stopped to look every night. It made them feel better. They still come by and stop.”

RECYCLING ICICLES IS WHAT MAKES THE TREE

She lifted nine or ten long strands of silver from the page. “Now, watch how I do this,” she said and hung one after another on a branch. Then she did another branch. Then another and another.

I was getting bored. I grabbed a handful of the tinsel and started to toss it at the tree. “No!” said my aunt. “You don’t throw it or put it up in clumps. You saw how I did it. Hang them long and even, a few at a time so you fill all the branches.”

Once the magazines held no more tinsel, Aunt Pauline plugged in the lights. We stood back and looked at the tree, and she said again, “Icicles are what makes a tree.”

I didn’t volunteer to help undecorate after the holidays. Taking down one strand of tinsel at a time and placing it in the Look Magazine did not sound like fun to me. But later, when I had my own tree, I remembered and started building my own magazine cache of icicles.

Today I know the truth — Aunt Pauline didn’t really invent recycling. In our neighborhood, recycling happened all the time. We just didn’t know recycling was the name for it. Outgrown clothes were passed on to younger children or recycled into quilts. Nothing came with a label that said disposable. Broken things were fixed – televisions, toasters, radios, and frying pans. Christmas decorations were passed down the generations. And Aunt Pauline recycled icicles because —

“Icicles are what makes the tree!” 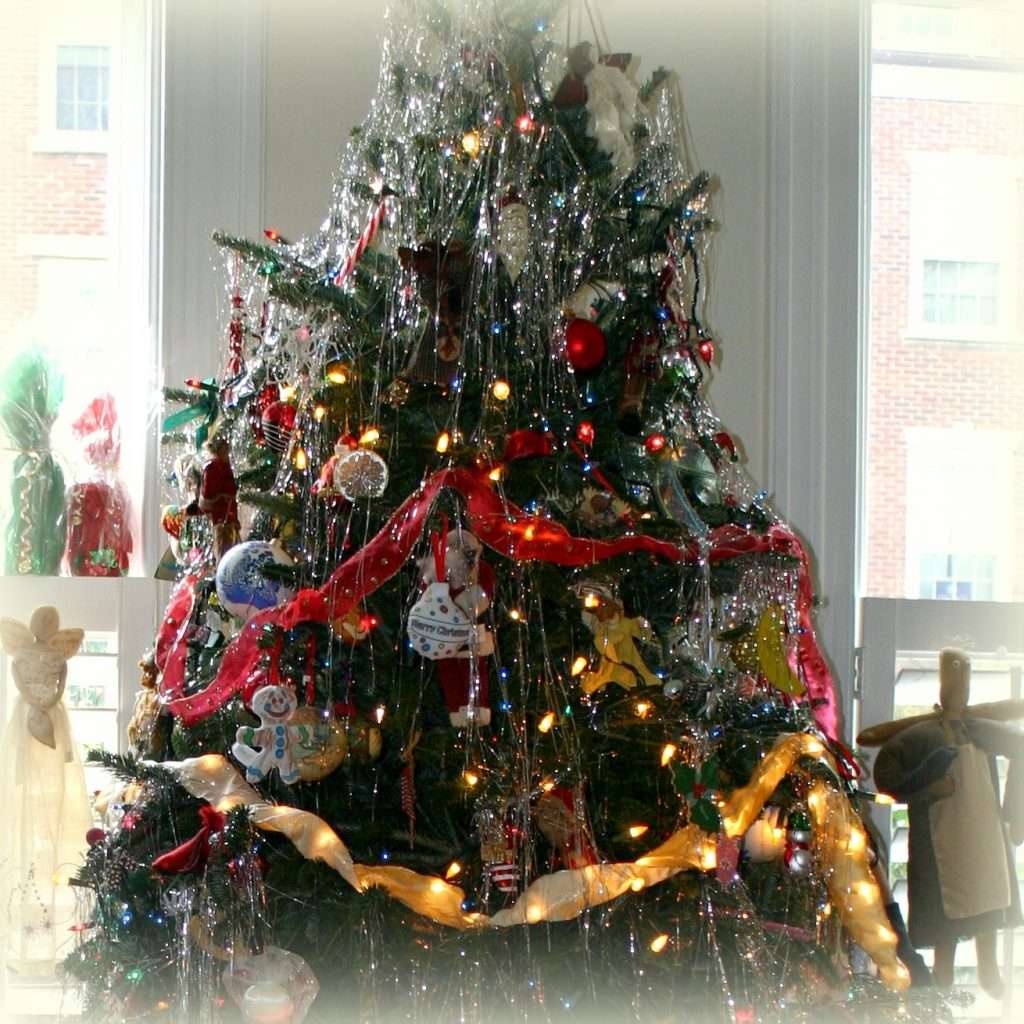 December 6, 2021
WANT MORE RUTHI?
Subscribe to my newsletter!
Get latest updates and exclusive content straight to your email inbox.
Give it a try, you can unsubscribe anytime.