Saturday morning, the children pounced on Uncle Gus. “You promised to tell us a story if we did our chores,” said the girl, “and I gathered the eggs and swept the porch.”

The boy chimed in, “I milked Popeye and Esmeralda, and brought in two pails of milk, and I didn’t spill any.”

Gus put up his hands to stop the spinning. “Sit still so I can think.” He sat down, rubbing his chin. “Okay. Here we go.

As I recall, when we left off, the animals on Crenshaw Farm were planning a talent show. Pearl, the feisty speckled duck, took charge. “Next Saturday is Valentine’s day. We’ll do it then.” She started signing up performers – and right quick she had a mighty talented bunch. And Hank, the fast-talking old gander, said he was on board to MC. 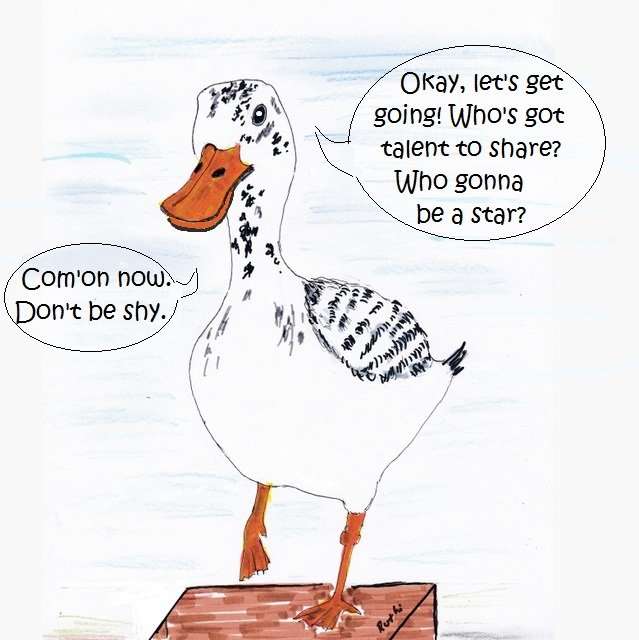 Pearl looked around. “Is that all?

Bacon, the ancient boar stood. “I’ll be in it – I’ll do a rousing poetry reading.” Hoots and groans came from the animals.

Pearl shushed them, and said, “Okay, just one poem – a short one!”

Then, Goldie, the bashful little hen, whispered, “Is it okay if I sing a song?” 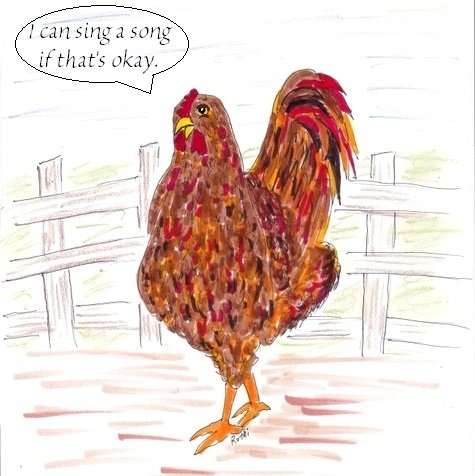 Goldie nodded her head. Pearl said, “Sure, Goldie. That’ll be real fine. But she thought, even if Goldie didn’t chicken out, nobody would be able to hear her.

Well, you could have knocked Pearl over with a feather when Rocko, that scary cat that lived under Farmer Crenshaw’s porch growled, “I’ll be in your show.” 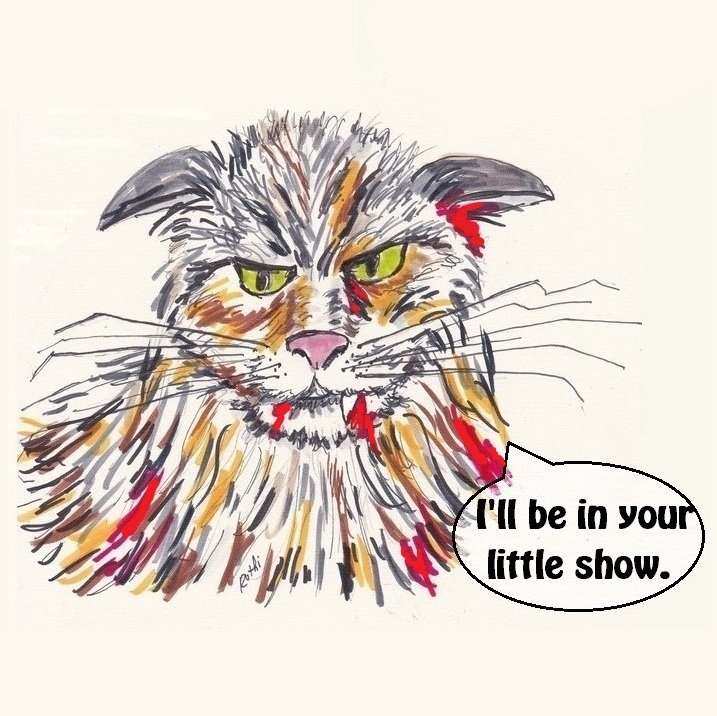 She blurted out, “What on earth will you do for talent, kill something?”

Rocko slunk back, mumbling, “I’m a… I mean I tell jokes… I’m funny….” Pearl saw she’d hurt his feelings, and put a wing around him. “I’m sorry, Rocko. I’m sure you’re funny.”

All week the performers could be seen rehearsing their songs, dances, or hi-jinks – except for Goldie. She hid by the pond so nobody could hear her – except the frogs.

Friday night, the barnyard went wild with the sounds of rehearsing  and stage building – till Farmer Crenshaw came out with his shotgun, yelling, “What’s got into you animals? Stop the racket! You’ll wake up folks clear to Gretna.”

But they couldn’t hear him over the noise. He shot his gun in the air, and yelled, “I’ll shoot the next animal that makes a peep.” That got them quiet!

I sure can’t blame Farmer Crenshaw, not a bit. I’d likely take out my shotgun too if noisy animals, or children, kept me from my beauty sleep.

Saturday finally came, sunny and shiny as a new penny. At noon, two opossums, a fox squirrel family, four raccoons, and a white-tailed deer joined the farm animals crowded around the stage. They brayed, stomped, and crowed for the show to start.

Hank strutted onstage, gave a low bow, and said, “Welcome to the Crenshaw Farm talent show. We have a regular extravaganza for you, so let’s bring on our first act, Josie, Snow Cone, and Peach, the three sweetest ewes whoever sang a love song.

The trio came on stage, but before they sang, each ewe stopped to search the crowd for her one true love, then looking all moony-eyed, sang only to him. Hank saw a storm brewing because they were all singing to the same ram, Dexter.

My sweet embraceable you

Embrace me, you irreplaceable you

Just one look at you

My heart grew tipsy in me

You and you alone

Bring out the gypsy in me”

At the end of their act, each blew a kiss to Dexter. Hank hurried back onstage, thinking he’d best get them off before they realized they were all after the same ram.

“Lovely job, Girls. You make an old gander wish he was a boy again. Now folks, get ready to laugh at our rough and tumble ducklings comedy act.”

The ducks tore onstage from both sides, ran, smack, into each other, and fell like dominoes. They got up spun around, collided, and fell again. Ralph somersaulted off of Bilbo and landed on Bumpkin, who got up and chased him round the stage. For their big finish, they cartwheeled off the front of the stage, and landed on top of the angry animals in the front row, while the rest of the crowd laughed, flapped, stomped, and quacked.

Moo, moo brown cow, have you milk for me?

Yes sir, yes sir, as tasty as can be.

Churn it into butter, make it into cheese,

Freeze it into ice cream or drink it if you please.

The audience laughed and some said, “Ahhh, isn’t she cute?”

“Good job, Rose,” said Hank, and she ran off, giggling.

Folks, what we have for you now is as beautiful a spectacle as you’re ever likely to see,  a blue rooster and a blue peacock, Blue Tommie Joe and Sundara, dancing the Barnyard Tango!” 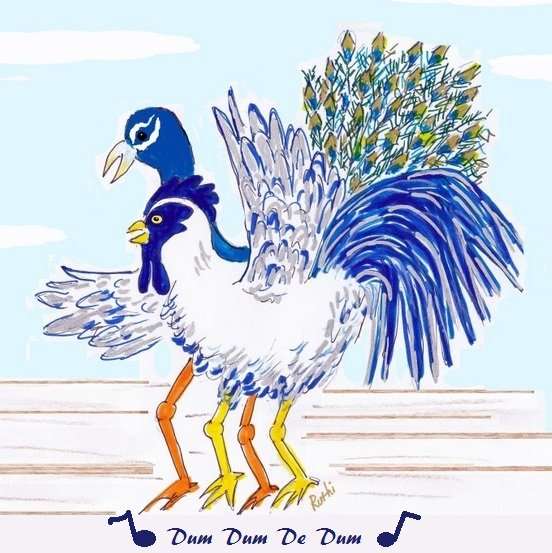 Blue and Sundara glided out, turned, sashayed, swooshed, swirled, and twirled around the stage. The animals gave a standing ovation, and the birds bowed – and bowed again until Hank edged them offstage.

Up next, was Bacon. But Pearl pecked him on the snout as he was climbing the steps. “Four minutes!” she whispered. 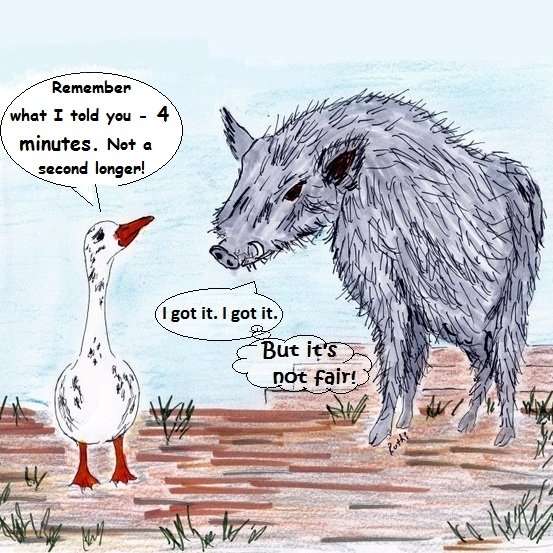 The ancient boar harrumphed and went on. Taking a proud stance, he said, in his high, nasal voice, “I will share with you a poem I wrote for this occasion, The tremulous fireflies.” 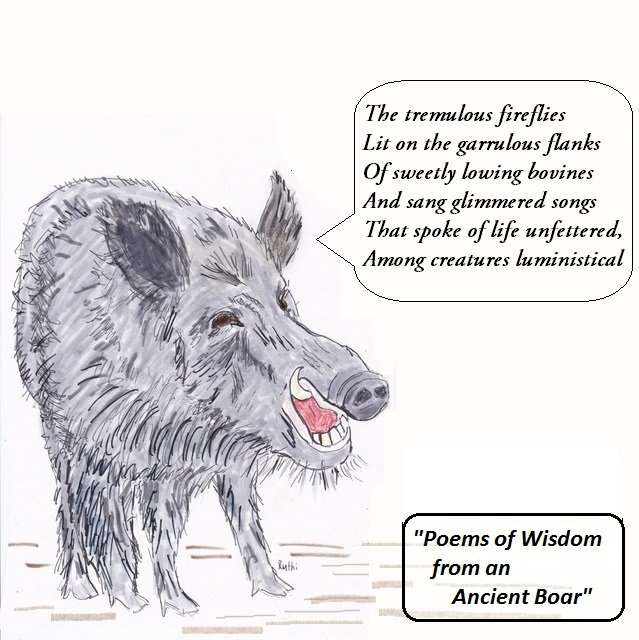 Nobody  understood a word of it, but applauded politely. Then, the crystal clear voice of a child rang out, “Mama, that didn’t make any sense.”

“Now, we have a treat. Rocko is coming on to make us laugh.”

The scary cat was nervous, but he forced a big grin on his face and told a joke. But his grin made Rocko look even scarier, so nobody dared laugh.

He plunged on. “You know, Folks, chickens are really poetic creatures. A chicken crossing the road is truly – poultry in motion.”

Silence again. Rocko said, “Get it? Poultry in motion?”

There were a few nervous titters.

“Okay. Did you hear why they kicked the duck off the basketball team? For making FOWL shots. Hey! I thought you geese would QUACK up at that one.”

What a surprise! Rocko really was funny. They laughed, and the laughs fortified old Rocko.

“Okay. I read about a pig that was a CIA spy and passed secret messages to another pig-spy in INVISIBLE OINK!”

He waited for the laughter to quiet down, and added, “It’s a sad story – the  pig came to a bad end. The other pig SQUEALED.

Now the only job he can get is GRUNT-work.”

The animals were laughing their heads off at scary old Rocko.

“How about a knock-knock joke?

“Who’s there?” they yelled.

“Honey be nice and catch me a mouse.”

He bowed and started to leave, but the crowd yelled, “More!” and Rocko was the happiest he had ever been.

“Okay, one more, then I’ve gotta go meet my buddy, the bull. He just got a divorce – because his wife was an UDDER BORE.”

The crowd jumped up, clapping and cheering, and wouldn’t stop till Rocko did more jokes. 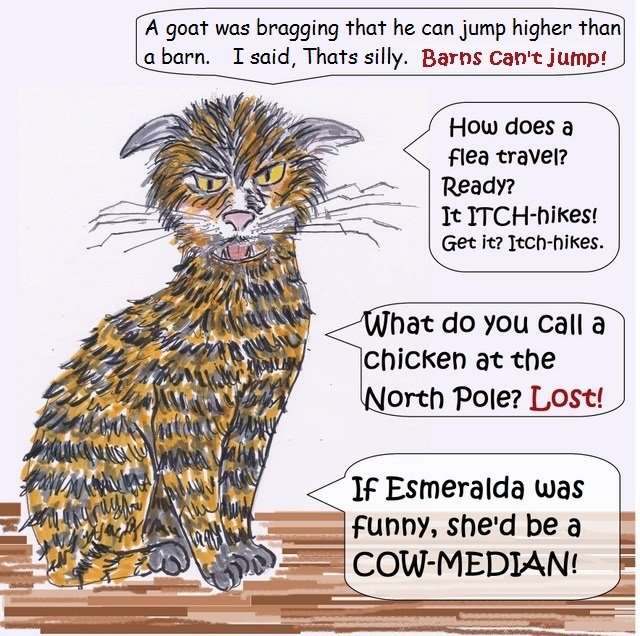 Hank came back, laughing. “Thank you for surprising us with your talent, Rocko. Now, for our last act, our little Goldie is going to sing a song for us. Let’s be real quiet so we can hear her.”

Goldie stood on stage looking like she might faint for a minute. Then she opened her beak and shocked every animal in the place. She belted out a song, in a voice that was loud, lusty, and hot!”

The man I love

And he’ll be big and strong

The man I love 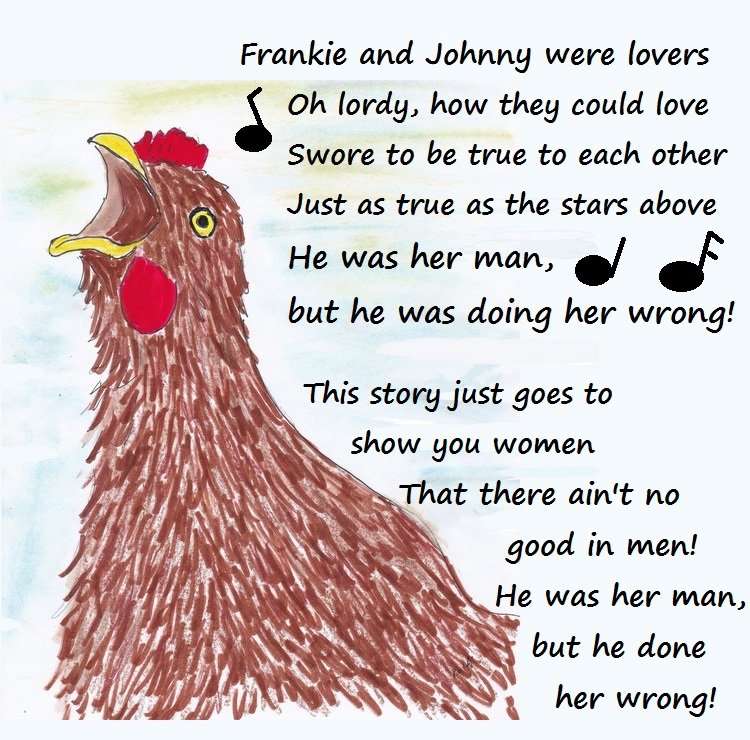 At first, the animals were stunned silent, then they were up, cheering and whistling, and wouldn’t stop till she sang another song, then another, and another.

I ain’t got nobody, and nobody cares for me!

That’s why I’m sad and lonely,

Won’t somebody come and take a chance with me? 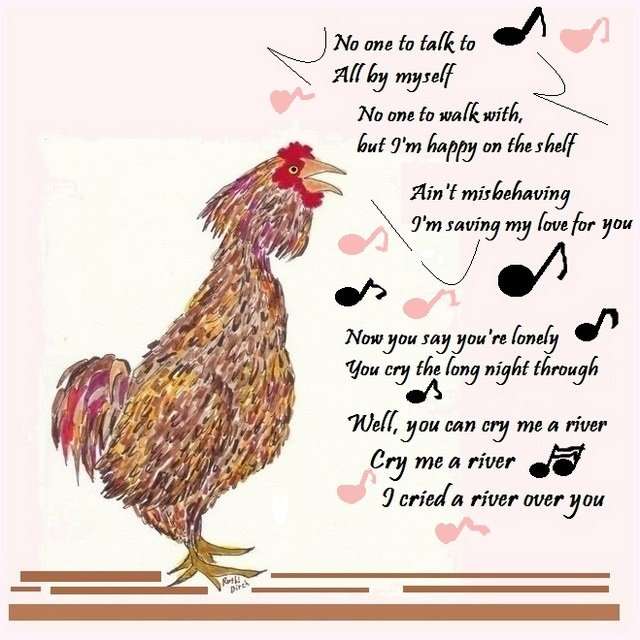 When she finished, all the animals were on their feet, whistling and throwing flowers and clover at the stage. Hank came up, bringing Rocko and stood between the two stars. 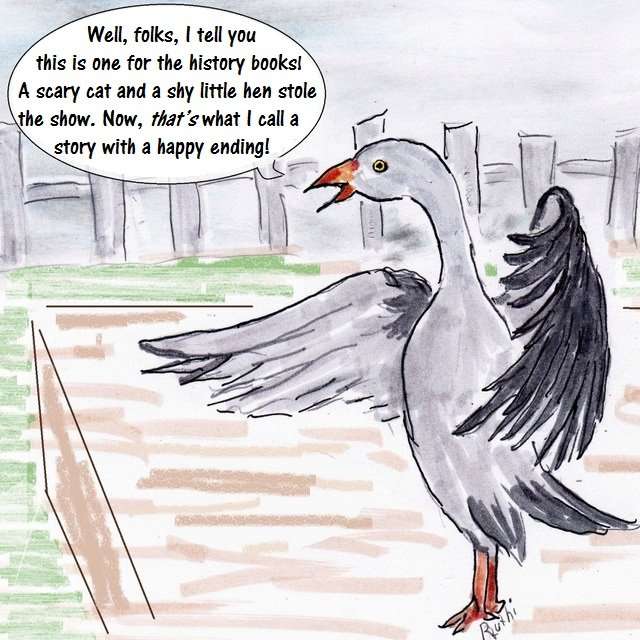 That’s our show folks, and it’s one for the history books! The scary cat and the shy little hen stole the show. Now, that’s a story with a happy ending!

Uncle Gus stood and stretched. “So, the end.”

“I Ain’t Got Nobody” Roger Graham / Spencer Williams

“Cry Me a River”  Arthur Hamilton

February 14, 2020
WANT MORE RUTHI?
Subscribe to my newsletter!
Get latest updates and exclusive content straight to your email inbox.
Give it a try, you can unsubscribe anytime.