Have you ever come out of a job interview miserable, sure that you’ve blown it? You went in so professional, so prepared. You knew all the right answers. Then something happened. Alas for preparation, your self-control went out the window. You can’t believe what you did or said next. Don’t beat yourself up yet. The mistake that torments you might actually have made you more real and likable. Josie, Sara, and Al thought they’d blown their job interviews. But what the interviewers saw were their authenticity, enthusiasm, and poise in carrying on. Here are their funny job interviews — that turned out great.

Sara was normally upbeat and easy-going but job interviews turned her into jelly. It was even worse this time because the job was everything she wanted.

“Job interviews,” she thought as she rode up in the elevator. “There ought to be a more humane way to get a job.” Then she saw the executive offices! She felt frozen. The place looked like money — stark, serious, no-kidding money — straight lines and sharp angles,  no curves or soft surfaces, not even the chairs. Even the colors were serious — from ash gray to gun-metal. Nothing about it seemed to invite Sara’s lighthearted personality.

Be serious, she thought. These are the kind of people who take job interviews seriously. Don’t make jokes. Show them you’re the serious person their business needs.

Sara was ushered into another straight-edged office to face two executives. The people who could be her next bosses looked as starched as the office. But they were surprisingly warm and friendly as they told her about the company and the position. They even made little jokes about themselves.

But Sara knew all the tricks in job interviews. The bosses would be funny and easy-going, trying to get you to let your guard down.

No, sir. She wasn’t falling for it. She showed them her straightest, most focused, and serious Sara — totally professional — and stiff.

As for their questions, she was primed and ready. She fielded each one in a direct buttoned-down, job-interview manner. The executives seemed to cool down. They stopped making little jokes.

Thrown For a Loop —

Then they asked a question she hadn’t expected or prepared for.

“Sara, we have a good understanding of your experience. It’s impressive. We’ve conducted several job interviews because we are looking for not only the right experience but the right person. So, tell us a little about Sara. What are you like?”

She thought for a second, “Well… uh … I have a pet ferret who’s very funny.”

“A ferret?” one of the executives asked. “He makes you laugh?”

“Yes! He’s so funny. He loves to play. His favorite trick is to steal my socks. I swear he laughs at me. And he does this funny dance — leaping and twisting and waving his legs.

By then Sara’s serious job-interview plan was out the window. “We dance together — like this.” 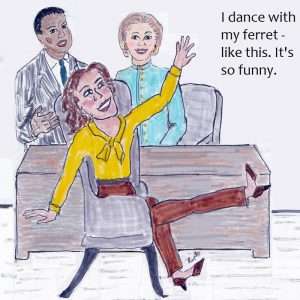 Sara threw her arms up in the air, almost tipping over her chair. She waved her arms wildly and kicked her legs in a mock ferret dance.

She left the office embarrassed and hating job interviews more than ever. But the executives must have been looking for someone not so serious because Sara got the job.

It was Josie’s first-ever interview for a real job. She got up early, shined her shoes, ironed her dress, combed her hair, and checked the mirror — she looked totally professional. She knew she had the skills the job required. But there was the job interview — with strangers. What if she blew it. She asked her devoutly Christian granny’s advice.

“My job interview is today and I’m scared.”

“Pshaw! Have you taken it to God in prayer?”

“Honey, God loves you. Jesus said if you want something that’s good and right, claim it in His name and He will answer. Trust God.”

“Don’t worry. Just put your confidence in the Lord. Claim the job in the name of Jesus.”

Josie’s interview was even scarier than she’d expected. The man who interviewed her was stiff, starched, and intimidating. He didn’t show any emotion as he fired questions from a checklist and made a note after each answer. Josie hoped her answers were okay.

Then she remembered Granny’s advice and followed it — to the extreme. She slapped her hand firmly on the desktop and declared, “I claim this job in the name of Jesus!” 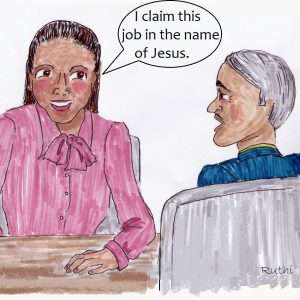 The banker’s eyes popped open. “What?”

She hadn’t meant to follow Granny’s advice quite in that way, but she closed her eyes and said again, “Uh, I claim this job in the name of Jesus.”

The rest of the story –

Later that day the banker told a colleague about Josie’s interview. “She’s a nice, bright young lady. She has good skills and seems willing to learn. But in the middle of the interview she slapped her hand on my desk and said, “I claim this job in the name of Jesus!”

It’s all in the handshake

Al went to his job interview overflowing with enthusiasm — and nerves. He really wanted that job. He’d made it through two rounds of interviews. Now he was back for his final interview with the company president.

He sat on the edge of his seat in the president’s office, careful not to wrinkle his freshly dry-cleaned suit. On the table beside him was a crisp, new copy of his resume in case the president needed it. He was ready.

Finally, the president came in. Al leapt to his feet, his hand out ready to shake. In a voice louder than he meant it to be, he said, “Wow. It’s such an honor to meet you!”

So, as this most important job interview was just starting what was in Al’s mind? I can’t believe I said, “Wow.” But he recovered and the interview went well. By the end of the interview Al was feeling a little more positive. He shook the president’s hand and expressed his appreciation and interest.

“When do you plan to make your decision? I’d love to have this job. This is a great company and I really hope you will hire me.”

Was that too much? He worried. Did I come on too strong?

Then, he backed up and fell backward over the table. 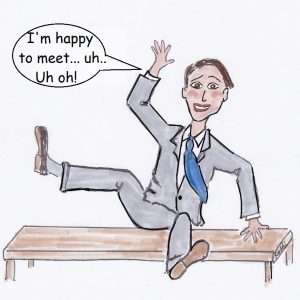 Al’s face was crimson, but the president was laughing and helped him up. His enthusiasm paid off. Al got the job.

Sara, Josie, and Al were qualified to do the jobs they wanted. But they worried that they’d blown their chances with their funny job interviews — doing the crazy ferret dance, taking Granny’s advice to the extreme, or falling all over themselves trying too hard. But that’s not what happened. Each person had the skills, but it was their mistakes that showed the interviewers the more important qualities that beat out the competition —  genuineness, authenticity, and enthusiasm.

June 1, 2022
WANT MORE RUTHI?
Subscribe to my newsletter!
Get latest updates and exclusive content straight to your email inbox.
Give it a try, you can unsubscribe anytime.