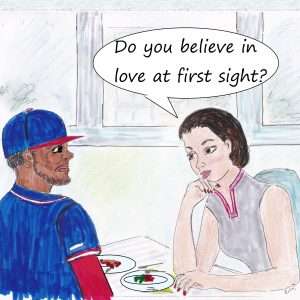 What do a first date and baseball have in common?

You’re finally up at-bat — you’re swinging for a home run, but you hit a foul, strike, or a pop fly to center that’s caught — and you’re out.

Everything starts with a first date — job interviews, meetings with possible future in-laws, and actual first dates. It’s where the stories begin — or end in a loss. So how do you hit a home run on the first date? The common advice is, just be yourself. That’s true, but maybe not quite ALL of yourself. Wait for the ball. Too much of you too soon and you’re out. 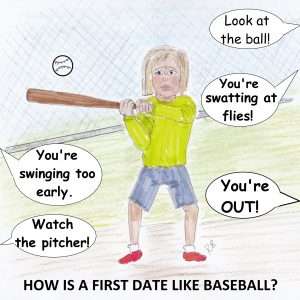 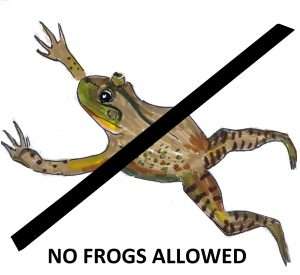 On your first date, the 5th inning may be too soon to be revealing your surprise for the second date.

Sharon and Sam both liked country music. Their first date was a Brad Paisley concert. It started out great. Then, at intermission, out of the blue, Sam asked a strange question.

“Have you ever had frogs’ legs?”

Sharon looked at him. Was he serious, she wondered? No. He must be joking. After all, they were at a country music show. So she went along with the joke using her best country accent.

“No sir. Never have I had the pleasure of eatin’ any part of a frog.”

“Well, then you’ve missed one of the world’s great treats.”

“Then you’ve never been frog gigging either. There’s a trick to it. You have to catch them young so they’re not stringy.” 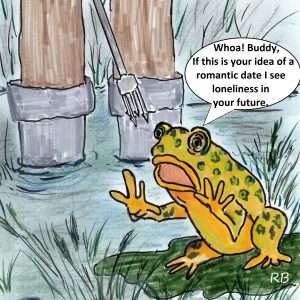 “No. Stringy’s no good. That’s what I always say.”

“When you’re frog gigging, you can’t rush. You have to take your time to find good-sized frogs with meaty legs.”

“No doubt about it! Meaty legs sure do matter when you’re hungry.”

“I promise you’re gonna love them.”

“I tell you what. Next Saturday night, I’m picking you up at six. We’ll go to the creek, gig us some frogs, and I’ll cook you the best frogs’ legs you’ll ever in your whole life taste.”

Sharon’s eyes got as big as saucers. “You’re not joking!?”

Sam was looking good till he hit a pop fly directly to the center fielder and he was out.

*More about Sharon and Sam and bad first dates in an article, Funny Ways to Flop First Dates.

Has this ever happened to you? You’re on a first date and — glory be — you’re hitting it off. You’re getting comfortable — too comfortable.

Jill was waiting for a National Geographic lecture to begin when a handsome man spoke to her. “Is the chair next to you taken?” It wasn’t. He sat. Jill and Frank chatted and enjoyed each other. They stayed after the lecture, still talking, laughing. Before the day was over, they had planned their first date — dinner at an Italian restaurant that was a favorite of both.

Jill was excited. “This isn’t going to be your typical first date,” she thought. “We already know we like each other. This is going to lead to something good”

They went to dinner and it looked like Jill had been right about this date. Over a glass of wine, they picked up where they’d left off at National Geographic. Jill couldn’t believe how at ease she felt — so comfortable that she didn’t pick up Frank’s signals that said she had crossed into his discomfort zone.

“This eggplant parmigiana is amazing — even better than their usual. You have to try it. Have a taste.”

“No thanks. I have plenty here.”

“Really, it’s wonderful. You have to,” she said, thrusting a forkful at his face.

She jiggled the fork and poked it at his mouth playfully. “Don’t be shy. You’ll love it.”

It was either get stabbed or eat. He ate. Sauce dribbled to his chin. Jill wiped it away with her napkin and laughed.

“Is that the best eggplant you’ve ever tasted, or what?” 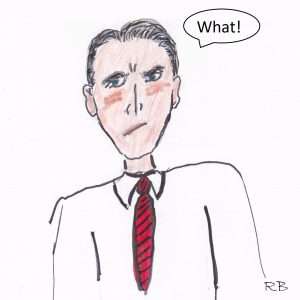 Frank grimaced. His face was red. He muttered, “What?” But Jill missed it. She was running on high and went right on sharing, “Your rigatoni looks great too. It looks firm. I hate limp pasta. How is the sauce?” She reached over and helped herself to a bite.

It wasn’t till after several unreturned voice mails and texts later that Jill decided Frank must have issues.

Strike one, two, three. And Jill was out.

AFTER THE JOB INTERVIEW / FIRST DATE — TOO SOON TO ASK QUESTIONS?

James’s job interview had gone so well he knew he was in.

It was a great job, and by the end of his first date/job interview, James knew it was his. He could tell he’d made a hit with Pete, the vice president. Pete had actually told him, “James, you have the qualifications we’re looking for and I think you can be a good fit for us. I just want you to meet my partner before it’s official. Will you be available next week?”

James was available. They set up the meeting for the next Tuesday. Pete walked James to the door, gave him his card, and said, “If anything comes up in the meantime or if you have any questions, please call me.”

“James. We met last week. I interviewed with you. I’m the one you said is a good match for your company. I agree. You said to call if I had a question. I do.” 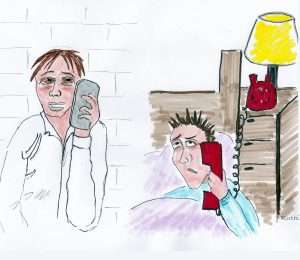 Too groggy and confused to be angry or even wonder how James got his home number, Pete grunted, “Okay. Thanks for calling,” and was about to hang up. But before he could, James went on.

“Anyway, Pete, I know it’s late but something has come up and I have to ask you a question. I’m in a bit of a jam. If you’re hiring me, can I get an advance on my salary? And can I get it tonight?”

James was thrown out of the game.

There are lessons we can take from these first-date stories. For one thing, stay away from frogs. You’d be surprised at how many people wouldn’t be up for a second date that included frog-gigging. Likewise, force-feeding your date may not work. And asking questions is tricky and if you’re asking for money you can count on that first date being a shut-out. A good rule to follow is to think before you speak or ask a question, so you don’t strike out saying:

Are you really going to eat all of that? How many children do you want? You’re nothing like I expected a person from Alabama to be. 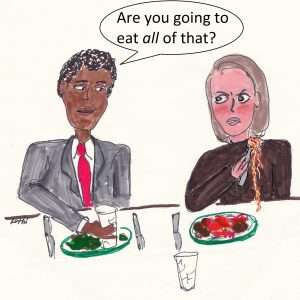 February 16, 2022
WANT MORE RUTHI?
Subscribe to my newsletter!
Get latest updates and exclusive content straight to your email inbox.
Give it a try, you can unsubscribe anytime.