A few nights ago, I did something I was told I couldn’t, and shouldn’t even try to do.

I stood on a stage and performed for an audience. The occasion was a launch party for my book, How To Build a Piano Bench; Lessons for Success From a Red Dirt Road in Alabama. I stood in front of the audience, spoke, told funny stories, and gave a reading.

After my performance, the audience stood up and applauded, or so my husband, Ron, told me later. I didn’t hear them when they laughed or applauded, and I didn’t know there was a standing ovation. I’d been transported to a place that was not excited, but calm.

Since I was a little girl, it had always been my dream to be on stage, entertain an audience, make people think, feel, and laugh. Now I was there, where I had been told I couldn’t go.

I started defining my dreams as a child when I played my favorite game, “play-like.” I’d make up stories and act out scenes, not for an audience, but all alone in my back yard.

The city is where I made-believe I was when I played alone in my backyard. My best toys were two sawhorses. Daddy had built them out of two-by-fours when he was building on Grandmama’s room. When I played cowboys, they were my horses. Sometimes I turned them over and leaned them against each other, and they became a big Cadillac car, like the ones in the old movies, with seats as big and deep as Grandmama’s bed and a gold lady on the hood. I put on Mama’s earbobs and beads and the yellow skirt Sister left in the closet—it was long and swung around when I walked. I looked as elegant as a movie star. I brought out ginger ale in the fancy glass goblet Daddy won at the fair, and played like I was in New York City, in a limousine, going to see a real live play, in a theater, with a man who was handsome and rich and so smart he could talk all day and never get boring. He poured champagne and kissed my hand and told me I was beautiful. (How To Build a Piano Bench: Lessons for Success From a Red Dirt Road in Alabama) 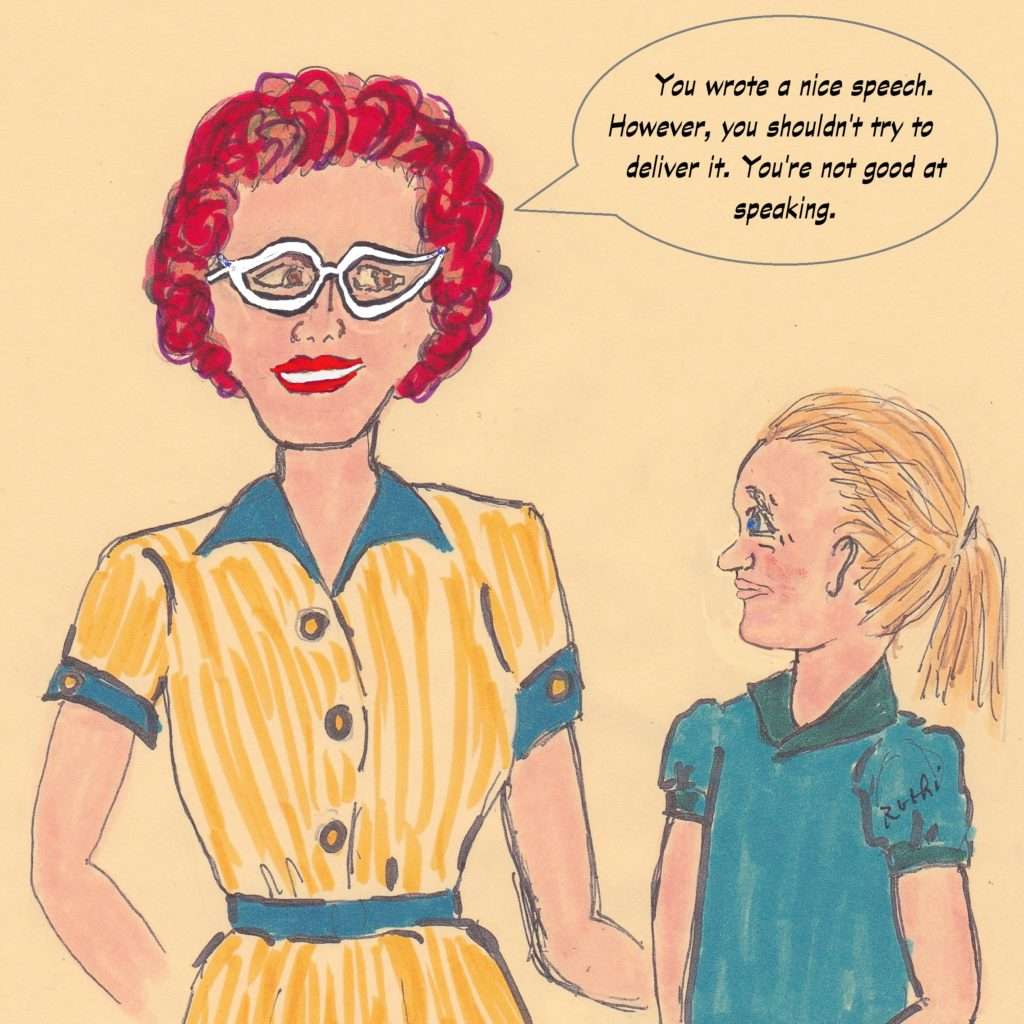 I’d sit in class or in church with Mama on Sundays and imagine myself on a stage, telling stories and entertaining people. Then, when I was in the ninth grade, a teacher told me to give it up, because it was never going to happen.

KJ Cark Junior High School had a class in speaking and acting for ninth graders, and I couldn’t wait to take it. I’d never been in a play or performed, outside of the Methodist Church junior choir. But now I was going to get the chance, and I was ecstatic.

Our first assignment was to write and give a speech, and I worked on nothing else for two weeks. But when the time came for me to give the speech, I froze. I knew it was bad. My face was hot. I could actually hear, for myself, how wooden I sounded as I spoke the words. Still, I hoped for some encouraging words from the teacher. I did not get what I hoped for.

“You wrote a nice speech, but you are not good at speaking. You should write and let other people give the speeches.”

I can still hear her and see her face as she said those words. She smiled. Her peach-colored face, framed by maroon-red hair, sported large, white cat-glasses, and she smiled that big, lip-stick smile.

I remembered her words the next time I tried to perform – and failed. When I was in high school, Mama met the director of the local playhouse and arranged for me to audition for a play. Once again, I froze stiff and dull. She was nice enough to give me a small part – as an old woman. I only had to sit in the audience, fall asleep during the play, and wake with a loud start at three appointed times. I threw myself into my role and I became that cranky old woman! 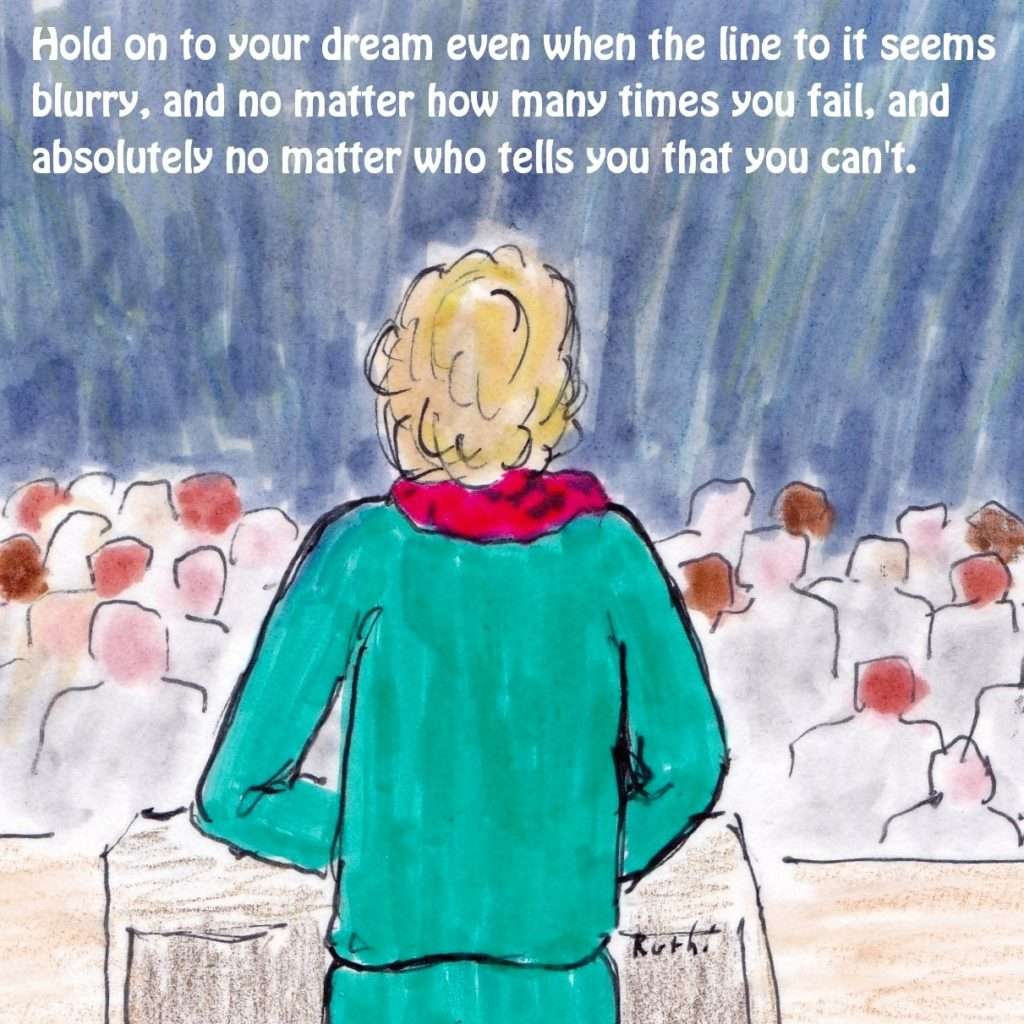 There! I’d proved I could perform. It was the audition that I couldn’t do. That play made me believe there might be hope for me if I could get on the stage without an audition, which didn’t seem likely.

I never again tried to do an audition, but went on with my life and my career, without the theater. But I realize now that I chose a career that fit into my dream – and without an audition! It gave me a stage, although it was a different kind of stage. My job was business development for a staffing firm, and the audience I performed for were employers in Washington D.C., my clients. As I helped them hire for their companies, I entertained then. I told them stories and made them laugh.

I also listened to their stories, gathered them up, and added them to my own experiences and the stories I’d heard growing up on a red-dirt road that straddled the poverty line in south Alabama. Some funny, some poignant, and many about overcoming obstacles, fears, and frailties, these stories and their lessons needed to be told. So I wrote my book.

As I wrote, I discovered my message and the voice that would find an audience. I wasn’t meant to stand and read lines in a vacuum. I had to be the character, whether it was an old woman or just me. I found my voice with my clients, then through writing, and it brought me to this place where I’d always dreamed of being. 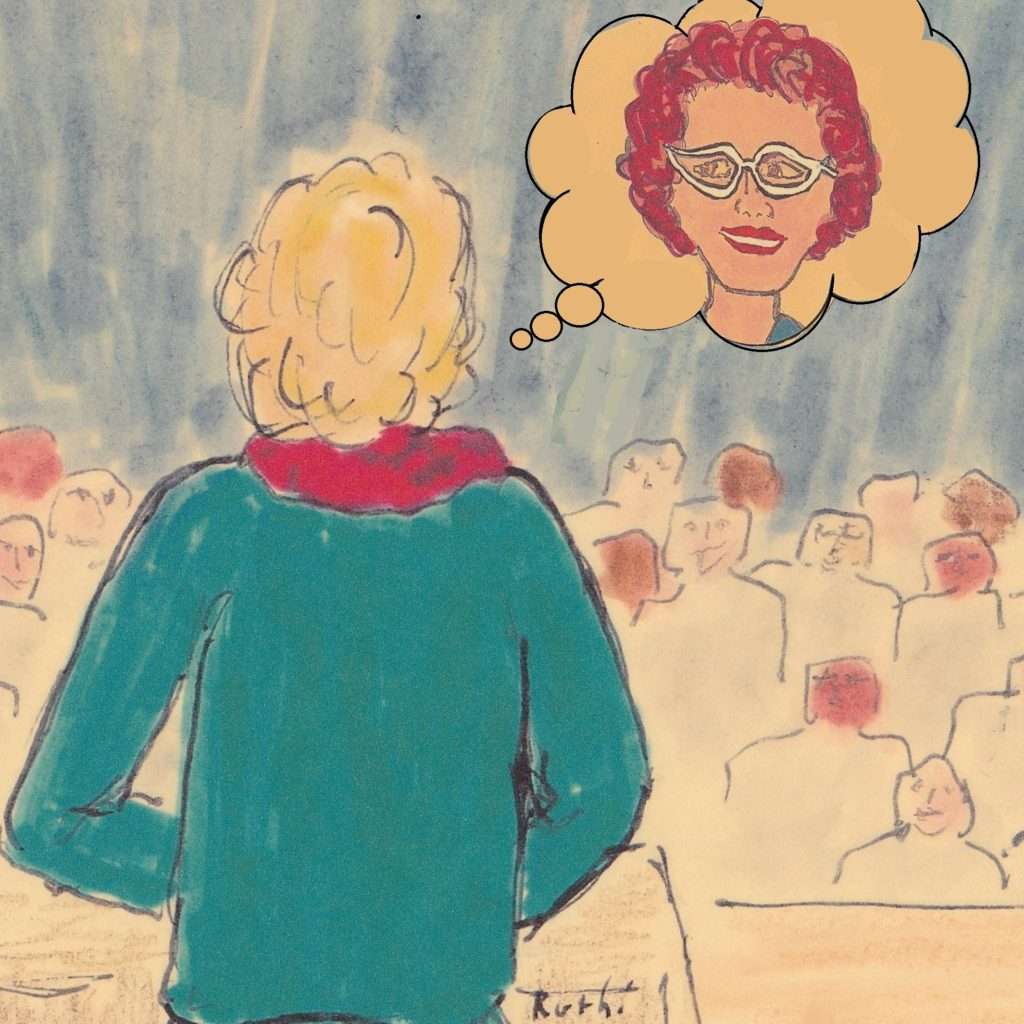 Maybe, for some people, there is a clear and distinct line from where they are to the place where they want to be, to their dreams. My line was not clear. It was so blurry that for some time, I didn’t know I was walking it, but as I look back, I see that I was already starting to live my dreams. I just had to keep living it and look for opportunities to take it further.

If you’re looking for your direction, the first step is to recognize your true dream, and sometimes that isn’t easy. I found mine in the games I played as a child. Maybe the games you played weren’t just games either. The next step is to hold on to your dream even when the line is blurry, and no matter how many times you fail, and absolutely no matter who tells you that you can’t.

And once you’ve reached your dream, what does it feel like? When I was on that stage, I felt a lot like I did when I played my stories in my back yard on Petain Street. I wasn’t afraid because I was the only one there, alone in my story.

For the last few days, I’ve been trying to figure out how I feel, or rather why I feel as I do. It’s not the same kind of excitement that I get from Ron or the people who called me or sent messages. How should you feel after you have finally done the thing you always felt you were meant to do? I just feel right.

November 14, 2017
WANT MORE RUTHI?
Subscribe to my newsletter!
Get latest updates and exclusive content straight to your email inbox.
Give it a try, you can unsubscribe anytime.