Visiting the relatives was no fun when I was a kid because nobody had kids my age. And when the grown-ups got together, all they wanted to do was sit around and talk about boring stuff — who died, who got married, who got saved, who drank whiskey. But sometimes, all of a sudden, some crazy things I heard them say would take me from bored to all-ears.

When I was nine, we went to visit Mama’s Aunt Ella in North Carolina. As soon as the hugs and hellos were over, we sat in the kitchen and had pie. Then, Aunt Ella went into a long story about how a cake she made for the fair fell. Mama and Daddy laughed — grown-ups thought the most peculiar things were funny.

When Mama started asking about all the other kinfolks, I knew it would go on forever. I whined to Daddy, “There’s nothing to do. I’m bored.”

He said, “Take your coloring book and go sit on the porch. Let your mama enjoy her cousin.”

I was at the door when a crazy thing I heard Aunt Ella say stopped me. “Ben needed shooting, so Eula shot him.” (Ben was married to Aunt Eula, who was Aunt Ella’s sister.)

With a picture in my head of Aunt Eula shooting Uncle Ben, I flopped to the floor to hear what came next. 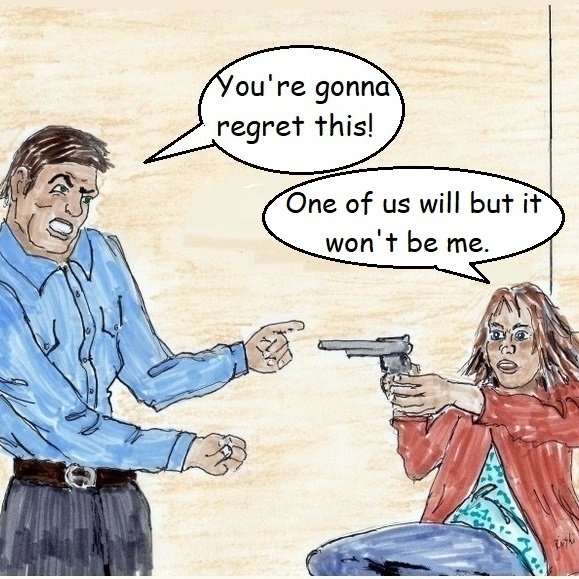 “It wasn’t much of a wound — he was only in the hospital overnight. Of course, Eula didn’t set out to kill him. She just needed to wing him to get his attention.” 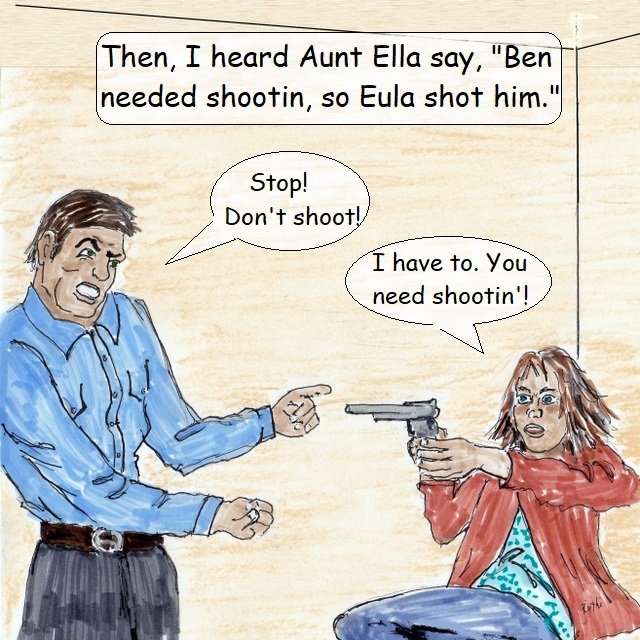 “And it sure did get it because, since that day, he’s a changed man. He’s stopped all his cattin’ around, cussing, and meanness.” 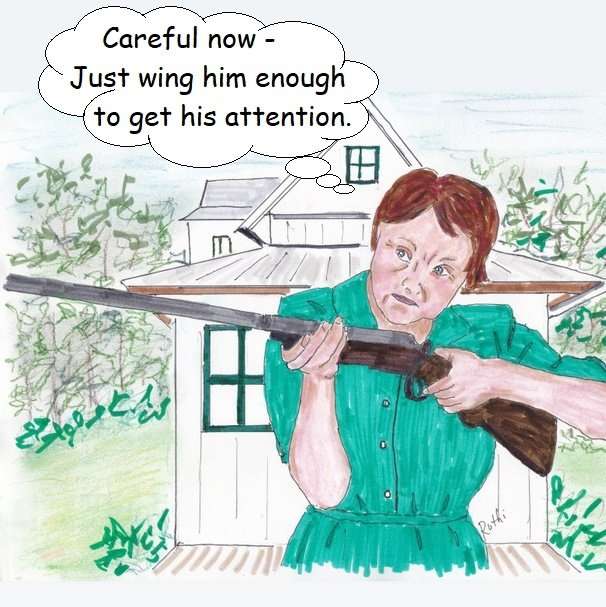 I wasn’t sure what all that meant, but it sounded like something to talk to my friend Delilah about when I got home.

“Thank the Lord,” said Mama. “That man has made Eula’s life a misery. I told her to leave him the first time he hit her. Now, what will happen to her?”

“Not a thing. The police knew about Ben. Everybody knew Ben needed shootin’. He’s the only one who didn’t know it.” She grinned and added, “But I reckon he found out.” Then, she blasted out a laugh.

I didn’t know why she laughed. I stared at her, trying to get the joke.

Just then, Aunt Ella noticed me. She looked at Mama, put a finger to her mouth and said, “Little pitchers have big ears.” I’d known that old trick since I was five. Now, Mama would send me out to play in the yard or run an errand. She did, so I never did learn what was the joke, or if Aunt Eula really shot Uncle Ben, and if she did why Uncle Ben needed shooting.

The crazy things I heard Daddy say were the best. He talked in pictures.

One Sunday we visited Daddy’s Uncle Harley and Aunt Berthel who lived two counties over from us. Right after we got in the car to go home, Daddy said,

“I tell you what. If  Berthel ever wants to kill Harley, all she’ll have to do is wash him.”

I knew Daddy was kidding about Aunt Berthel or a bath killing Uncle Harley because he laughed. Then he said, in a sad voice, “I don’t know where Harley gets it. Our people aren’t dirty. I love him, but it’s real hard to spend time at his place.”

Then, he laughed again. “Truth is dirt, sweat, and tobacco spit are all that’s holding the man together. Wash them off and he’d go right down the drain with the water – dirt, grease, spit, and all!” 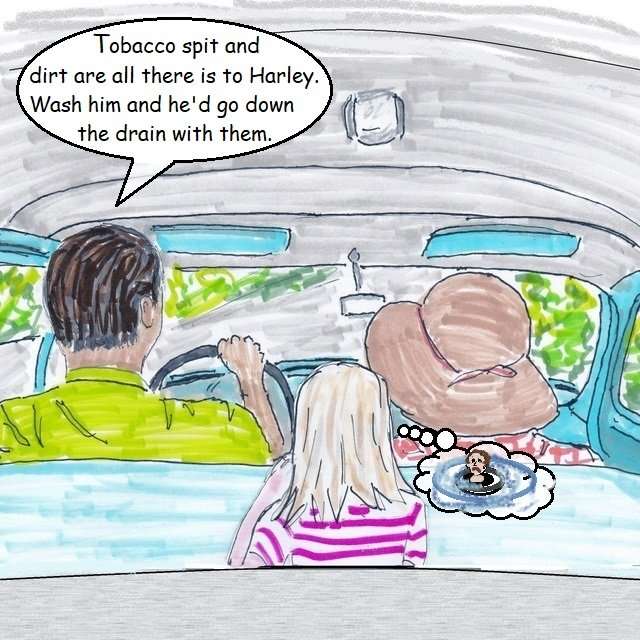 I took out my crayons and tried to draw Uncle Harley melting and going down the drain but I couldn’t make it come out right. 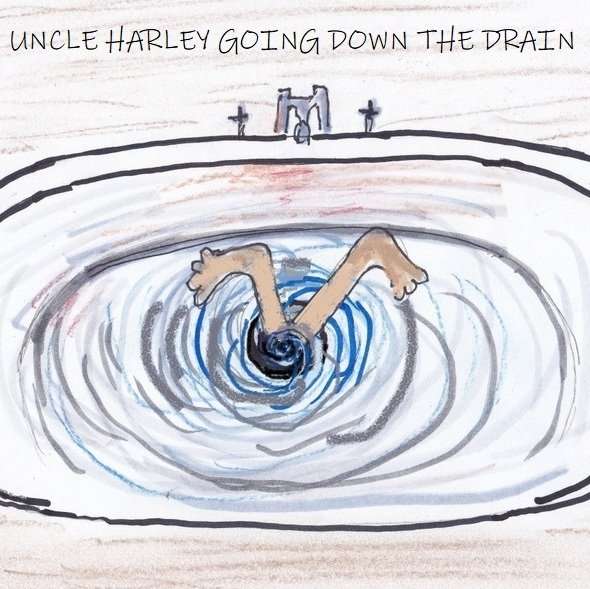 Mama said, “Berthel told me they have a pair of skunks as pets. Did he tell you?”

“Oh, yeah. Harley’s real proud of them. He showed me. Their cages are by the back porch.”

Mama made a face. “No! Not right by the kitchen window! The smell!”

Daddy said, “Yep. The little skunks don’t deserve that kind of punishment.” And they both laughed.

When I got home, I drew a picture of Aunt Berthel trying to make Uncle Harley get in the tub. It came out better than Uncle Harley melting. 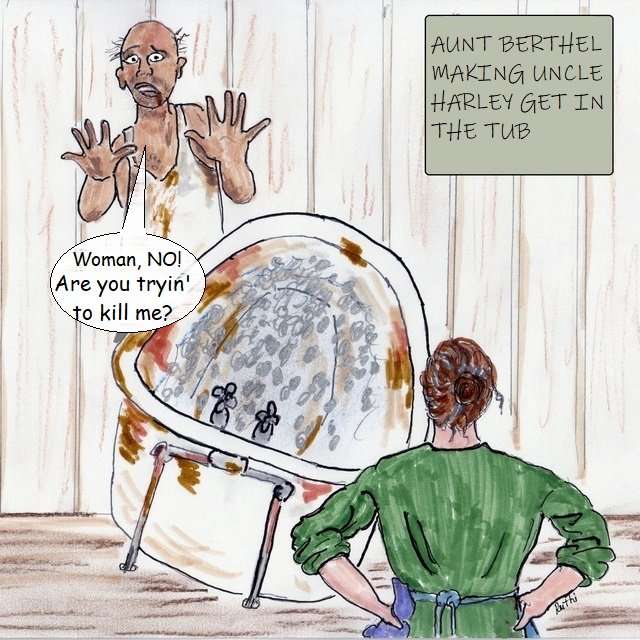 Then I drew the skunks. I thought they were my best pictures. 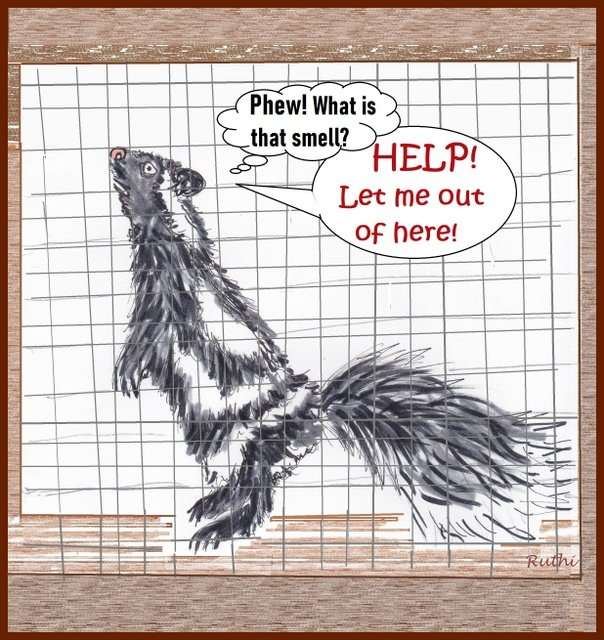 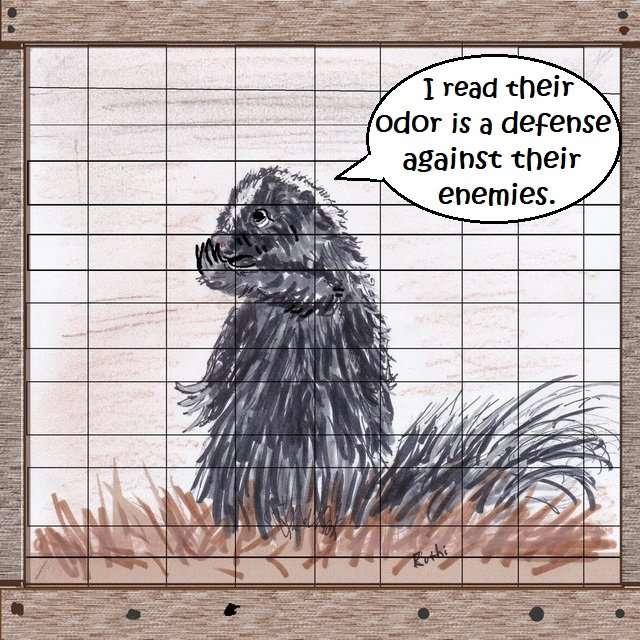 The crazy things I heard the grown-ups say when I was a child became images that stayed with me — pistol-packing Eula, Uncle Harley circling the bathtub drain, skunks holding their noses. I have to thank those people who lived life (f)unscripted and left my head full of stories and sayings to spice up my life.

January 19, 2021
WANT MORE RUTHI?
Subscribe to my newsletter!
Get latest updates and exclusive content straight to your email inbox.
Give it a try, you can unsubscribe anytime.