One summer afternoon when I was seven or eight I heard conspiracy theories for the first time. Aunt Esther was telling Mama that the communists were plotting to take over America!

She said there were communists all over America. They had been sneaking in for years and hiding. Now they were getting into big jobs in the government. When they took over there would be a dictator and we wouldn’t be free anymore. People who didn’t agree would be dragged to prison.

I was just a kid and still believed grown-ups knew everything. And Aunt Esther even had pamphlets to prove what she said was true. Suddenly my world was dark and scary. The communists could even be coming to Alabama!

Aunt Esther was Mama’s sister. She had come to visit all the way from California where they seemed to know about conspiracies. She was as different from Mama as night from day. Mama was day — plump, sunny, and jolly. Aunt Esther was night — thin, elegant, dark. And she was an expert on communism and its threats to America.

After the dinner dishes were cleared away, the grown-ups sat at the table with their coffee, and Aunt Esther talked about the conspiracies. Mama and Daddy didn’t notice me laying across the big green chair in the living room, a few feet away — listening to every scary word she said. 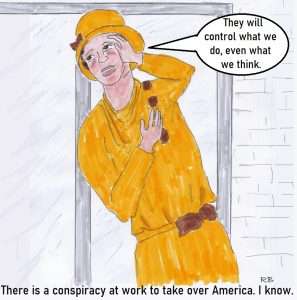 “You know Russia has the bomb. They could start a war, but they’re smart enough to know it would be better to take over from inside.  (The bomb part didn’t really worry me. I’d learned at school that if a bomb came, all we had to do was climb under our desks and we’d be safe.)

“They plan to take over our country little by little by infiltrating our government, schools, even some churches.  They’ve already started to put their people in powerful jobs.”

“It’s not bull-you-know-what. I can name two Congressmen who may be communists.”

I heard papers rustling and Aunt Esther said, “Here! Here’s your proof? This is an official report from the researchers at the John Birch Society. It has names of communists already in power. Read it for yourself.”

It must be true, I thought. There’s an official report. 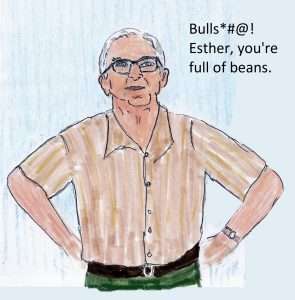 ”Crazy as a fox — you’ve heard the expression? Well, that’s what they are — our foxes — our watchdogs. You have to read it. There are networks of spy rings in almost every State and most major towns. They’re everywhere and they are watching us, listening, and sending reports back to Russia.”

“This is bull*&%^,” Daddy said again. I heard his chair scrape across the floor as he stood up. “Esther, you’ve been hoodwinked. I’ve had my fill of conspiracy theories. Goodnight.”

She called after him, “I hope you don’t wake up one morning and find out you’re living under a dictator who controls where you go and what you think.”

I was wondering how they would know what we were thinking when Aunt Esther said, “Eva, you need to listen to me. I’ll tell you it’s happening. If we let them win, America will be just like Russia. You will live where they tell you and do what they tell you.”

She went on to describe the awful things that were going to happen to us. I wanted to stop listening, but I couldn’t — like when you’re in the most terrifying movie ever and you’re really scared but don’t want to leave. 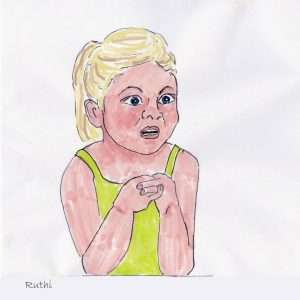 When They Take Over

Mama said, “Esther, I don’t believe this stuff. You get yourself all worried over things that are never going to happen.”

“Hah! Unless people listen and take action they will happen— not all at once, but they’ll happen. I guarantee you there are already communists at work right here in Mobile — maybe even in your church. They look just like us so you don’t know. One could be preaching from your own church pulpit, and you wouldn’t know.”

I jumped off the chair. “We don’t have any communists in our church, Mama. Do we?”

Uh-oh! I’d given myself away.

Mama turned to look at me. “No. There is nothing to worry about. Aunt Esther is just supposing what if. You shouldn’t be in here anyway. This is grown-up talk. Now, why don’t you get your bath?”

First They Brainwash the Children

Aunt Esther said, “She’s at the very age they are coming for. First, they put their teachers in the classrooms to brainwash our children with their lies. Make no mistake — it won’t be easy to tell. They are wily and trained to fool you. You don’t know — her teacher could be a communist right now

Mrs. Green is not a communist!” I whined under my breath because I didn’t want Mama to make me leave.

But Aunt Esther heard me. “How do you know she’s not? You wouldn’t know if you were being brainwashed.”

I still didn’t believe Mrs. Green was a communist but I kept quiet.

“It happened in Russia, and it can happen here. They take the children away to their own schools where they brainwash them to believe in communism. 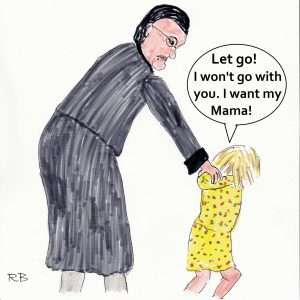 Then they tell them it’s their duty to watch their parents. Children turn in their own parents. Then the secret police come and drag them away to prison.”

I ran to Mama and jumped into her arms, crying, screaming, “No! I won’t do it, Mama! They can’t make me. I’ll never tell no matter what they do to me. I won’t let them take you to prison.”

“You would if they brainwashed you,” vowed Aunt Esther.

By that time my crying had brought Daddy back in and he was mad.

Mama said, “Norvelle is right. No more conspiracy talk — period! When Mama said “period” she meant business. It put an end to Aunt Esther’s conspiracy theories for that visit. 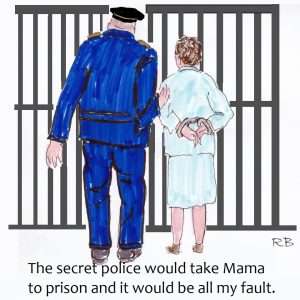 Conspiracy theories, like war, are not good for children and other living things.

Until Aunt Esther brought her conspiracy theories, my only serious fear was that Mama could die. Aunt Esther elevated my fear into a recurring nightmare —  the secret police could come into our house and drag Mama away to prison — and it would be all my fault.

What were your greatest childhood fears? What do you think our children will remember as their greatest fears — Evil conspiracies? War? The government? Bullies? Bad people with guns?

September 1, 2022
WANT MORE RUTHI?
Subscribe to my newsletter!
Get latest updates and exclusive content straight to your email inbox.
Give it a try, you can unsubscribe anytime.