Childhood Adventures – An August Day With Nothing To Do

It was a sticky-hot South Alabama afternoon in August, and I was seven years old. I sat on our front steps with my chin in my hands — miserable. There weren’t going to be any childhood adventures that day. I couldn’t go swimming because Mama had to work. My friends weren’t home. There was nothing to do.

I got up and walked up to Smith’s store and watched the butcher cut meat — that’s not as much fun as it sounds.

Looking for something — anything — that wasn’t boring, I wandered up Petain Street. I thought of the lopsided shotgun house that perched unsteadily over the ditch. Nobody lived there. Exploring it might be fun. 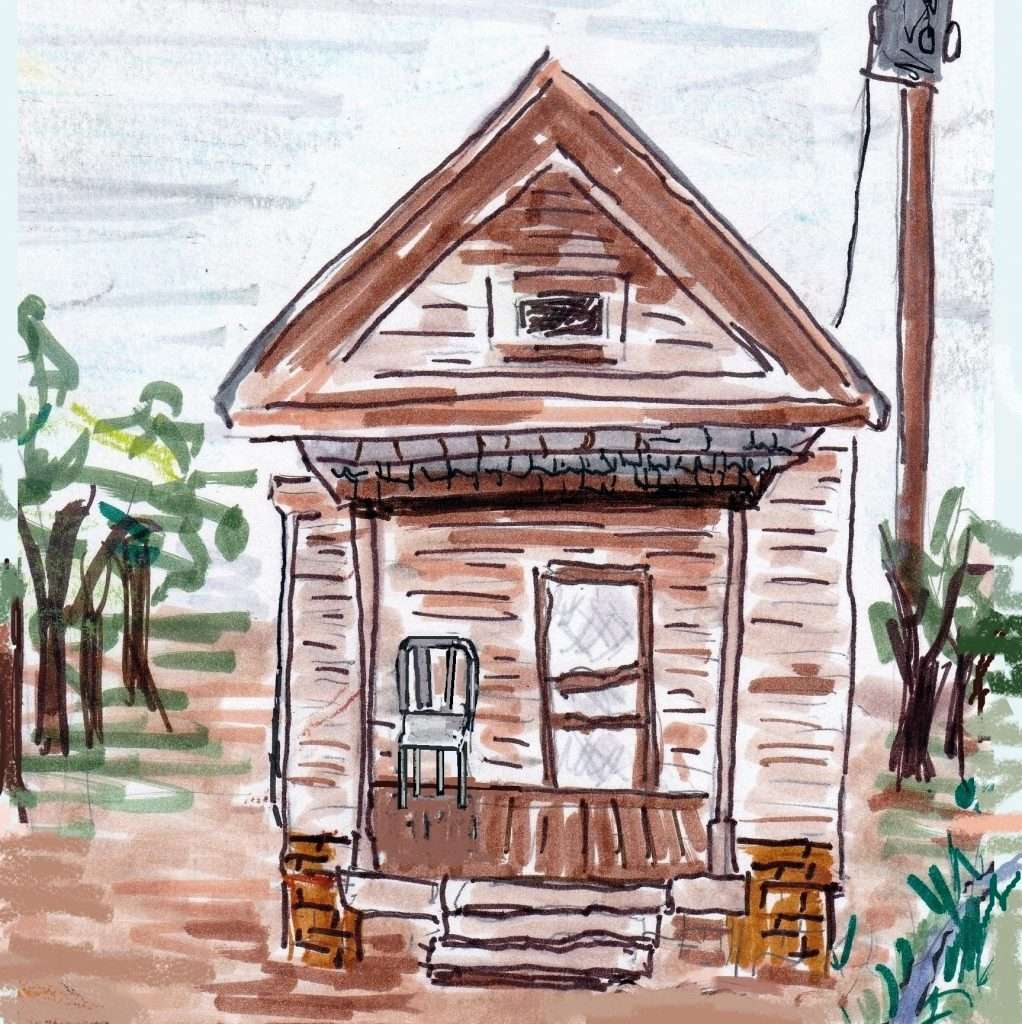 When I got to the house, I heard someone calling, “Hello. You there, hello.”

I looked up and down the sidewalk. There wasn’t anybody.

I heard it again. “Hello. I’m up here. Hello.” I looked at the house. There was a lady sitting on the porch. And she was waving — at me. 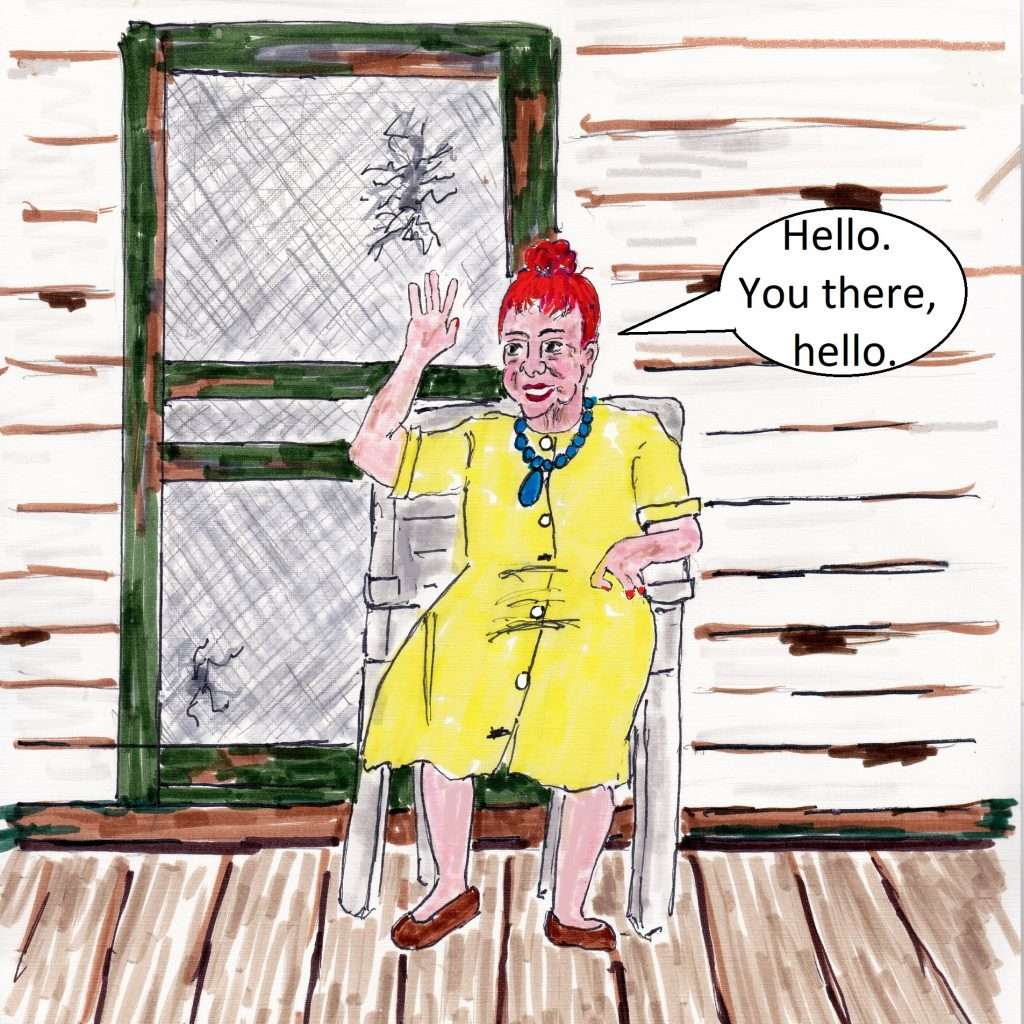 “Hello. If you don’t have anything to do, come on up a sit a spell.”

I had else nothing to do, so I went. [This was a different time of course — and a different place. Children had the freedom of safety. I never gave a second thought to sitting on the stranger’s rickety front steps and talking.]

As I came closer, I could see there was a real good chance this would not be boring. The lady didn’t look like anybody I’d ever seen. She looked like an adventure! 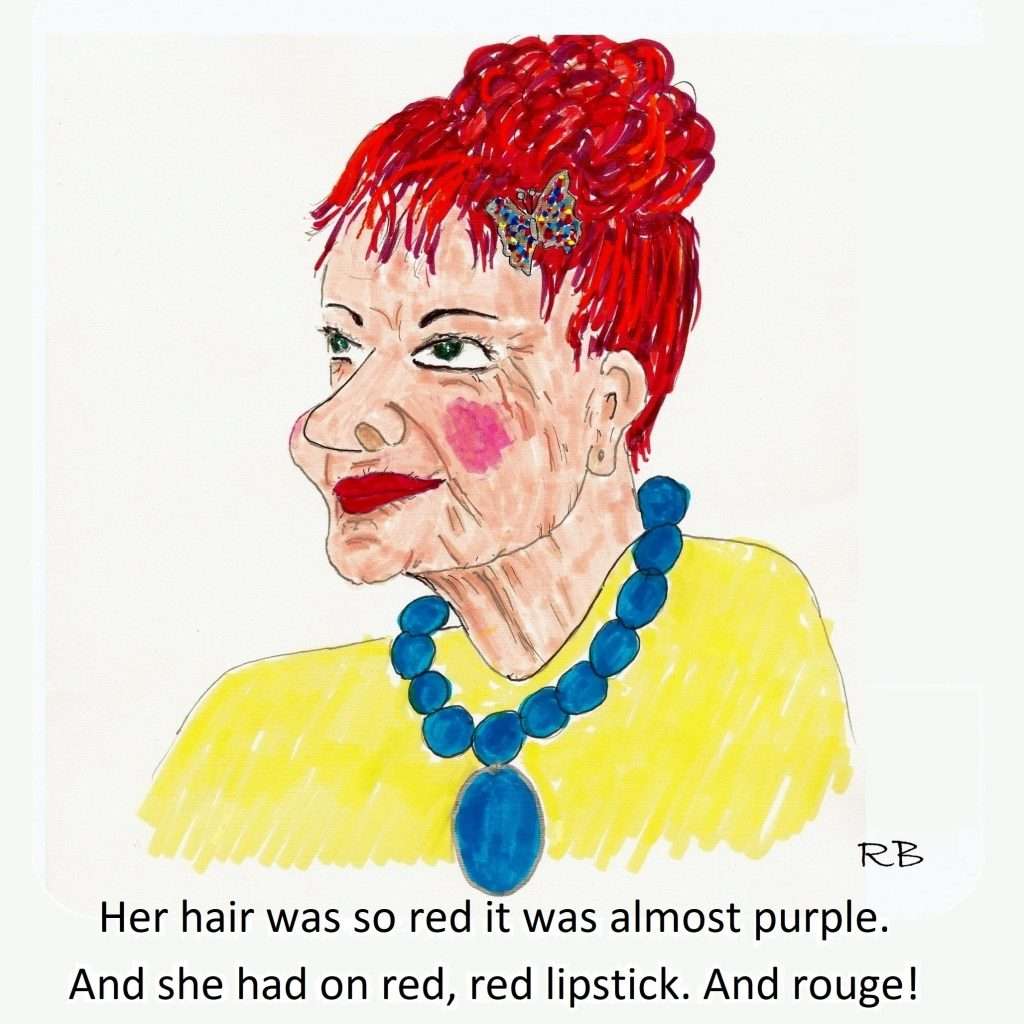 She was old — as old as Grandmama and even more wrinkled. But nothing else about her was like my grandmama. Her hair was so red it was almost purple. It was piled up on her head and held by a glittery butterfly hairpin. And she had on red, red lipstick! And rouge!

She didn’t move like Grandmama either — she sprang up and kind of skipped across the porch to meet me.

“How do you do? I’m Dottie Stone,” she said. She stuck out her hand and shook mine — just like I was grown.

“I’m real pleased to meet you. I just moved here.” She threw her hands in the air. “And you are my very first friend. So you should tell me about yourself.”

“Okay. Uh … my name is Ruthi. I’m seven years old — almost eight. I live with Mama, and Daddy, and Grandmama at 13 East Petain Street — I’ve lived there almost all my life. Uh … and I go to Turnerville Elementary School. I’ll be starting third grade.”

“That’s a fine start. Now I’ll tell you about me. Then we’ll have things to talk about.”

“First of all, I’m from Chicago, Illinois. Have you been there?”

I shook my head.

“Well, you should go. It’s a grand city. Everything is big!” 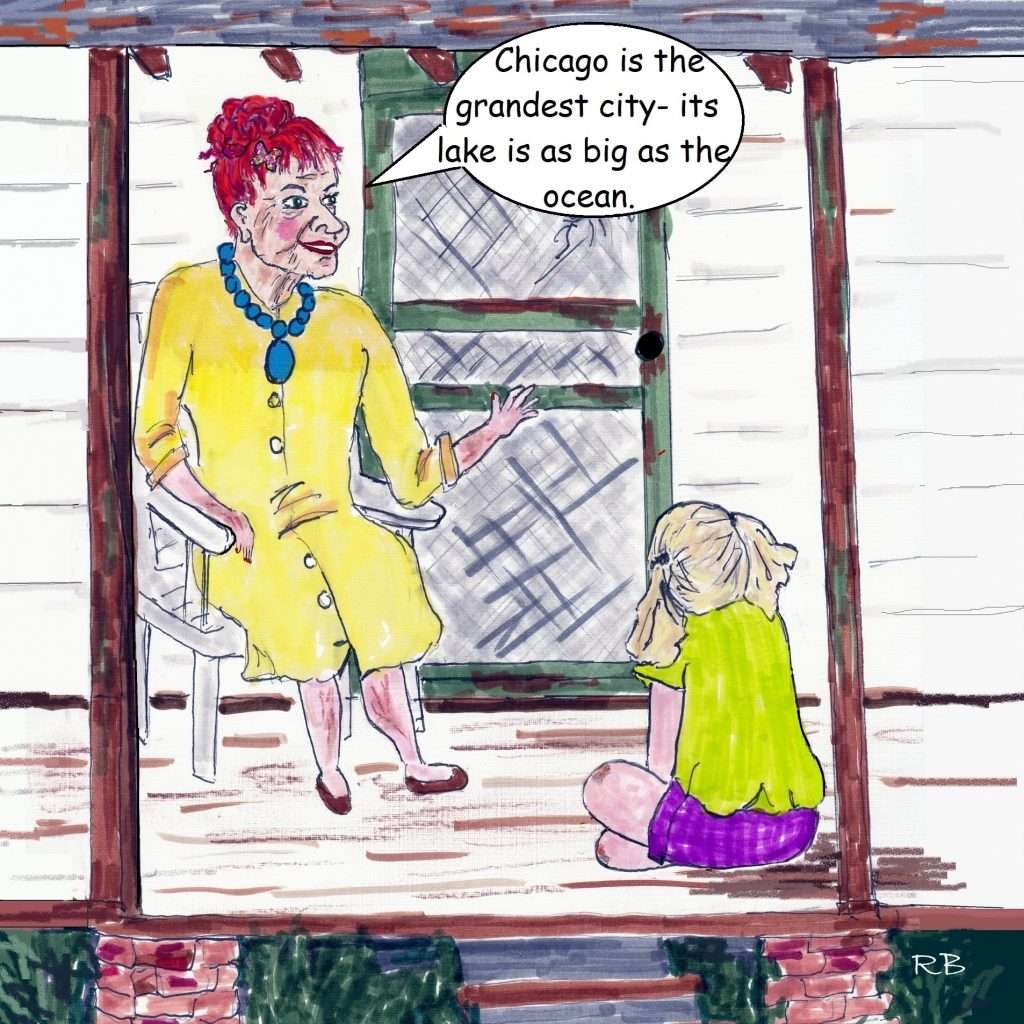 As she talked her hands danced. She waved and poked them — then held them in front of her with fingers spread wide like she was making a frame for the picture she was painting.

The woman’s face changed too. Her wrinkles crinkled and stretched. Her mouth was a wide grin one minute and gaping with amazement the next. And her eyes — they sparked. They grew huge with wonder, then squinted like she was pulling up a long-ago memory. It was like watching a color cartoon.

“Chicago sits on a lake so big you’d think it was the ocean — like it goes on forever.”

I’d never seen an ocean but I’d seen Mobile Bay. It looks like it goes on forever. I thought her lake must be like that.

“And you’ve never seen such tall buildings. How do I tell you? You’ve seen the Van Antwerp Building in Mobile?

“Chicago has buildings five times as tall. Maybe that’s why they call it the ‘city with big shoulders.’”

I wasn’t sure about that. Daddy told me the Van Antwerp Building was a skyscraper —with eleven stories! 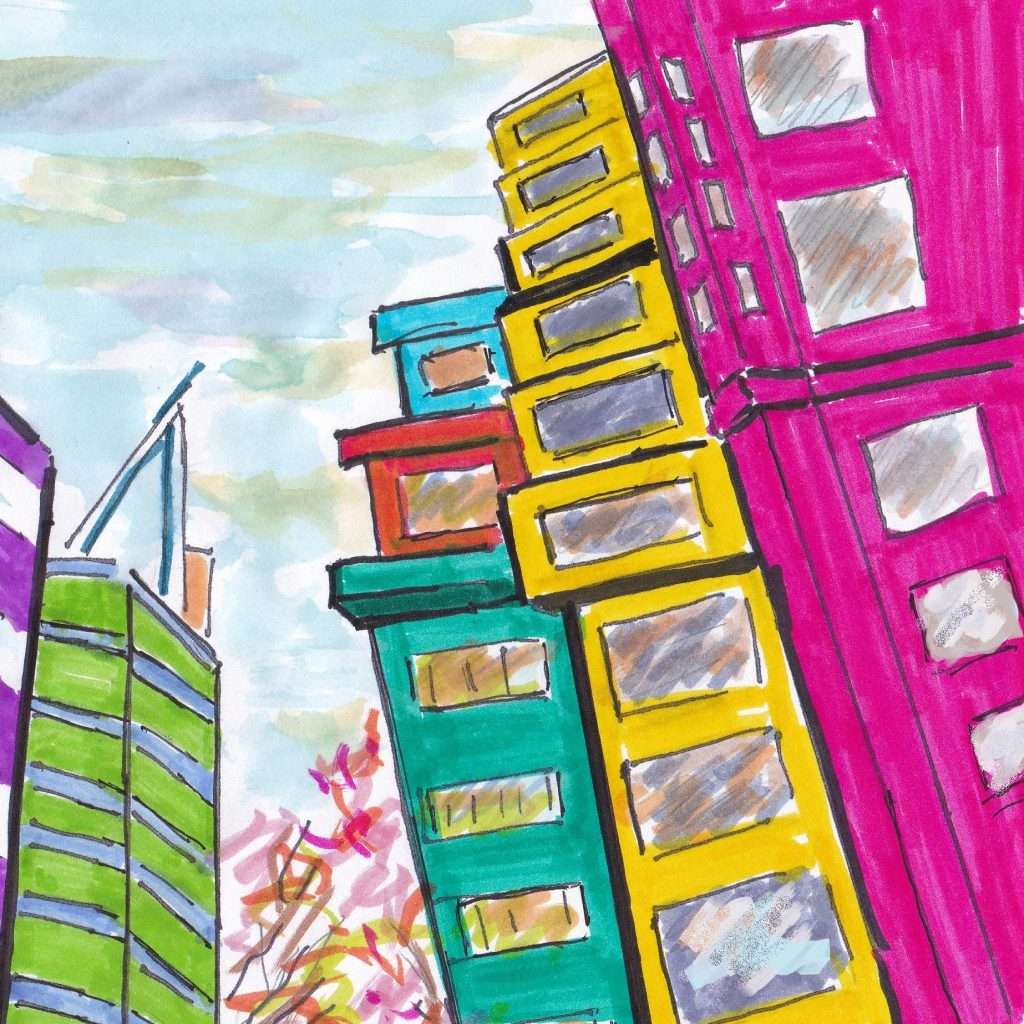 She laughed. “They don’t fall, but they do whistle and wail when the wind blows through. And Chicago’s winds are famous. It’s called the windy city.”

“And the big shoulders city?”

“Yep. Big shoulders, winds, and crowds of people, and cars. But you don’t have to drive. Just take the L — its trains run on tracks above the city.”

A train up in the air? I doubted it. But it sounded exciting even if it wasn’t true. 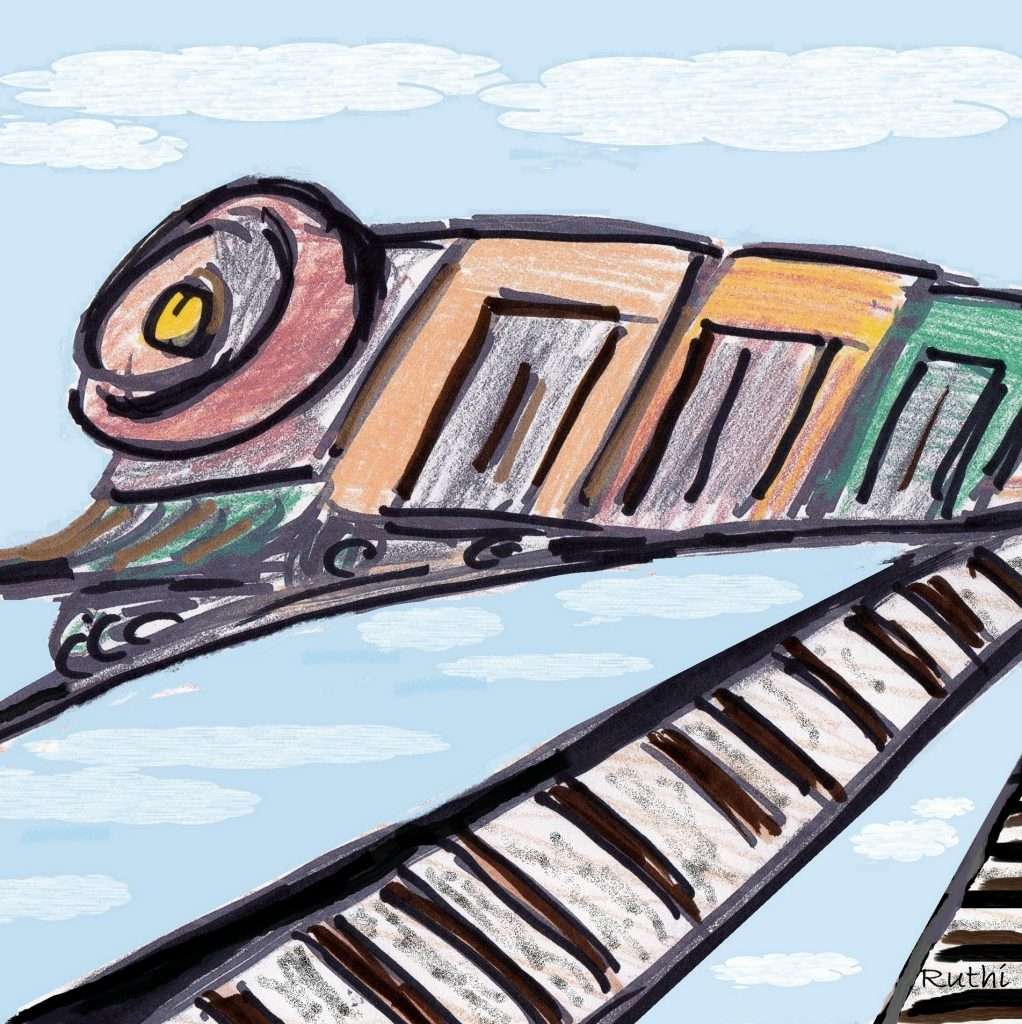 Dottie Stone looked up to the sky like she was seeing it. She went on talking until I could hear the hundreds of horns blaring and the winds humming and whistling through towering buildings. And I could see people rushing in all directions, holding their hats and struggling with umbrellas turned inside out.

“Enough about that. It’s your turn again. Tell me more about you. What’s your favorite game?”

“Isn’t that a fine twist? We’ve already found something in common. I was a dancer.”

“No. I danced in big ballrooms with orchestras. Chicago has lots of them. Young men go there to dance with a pretty girl — that was me. I’d get all dolled up in my prettiest dress and the young men would come and pay to dance with me.”

“Yes. Of course, it was a few years ago. I’ve always been light on my feet — still am. I had the most dances because I was very popular. I was the prettiest girl there.”

“You were?” I said — too quickly, but she didn’t seem to get it. She had already jumped up and was dancing. 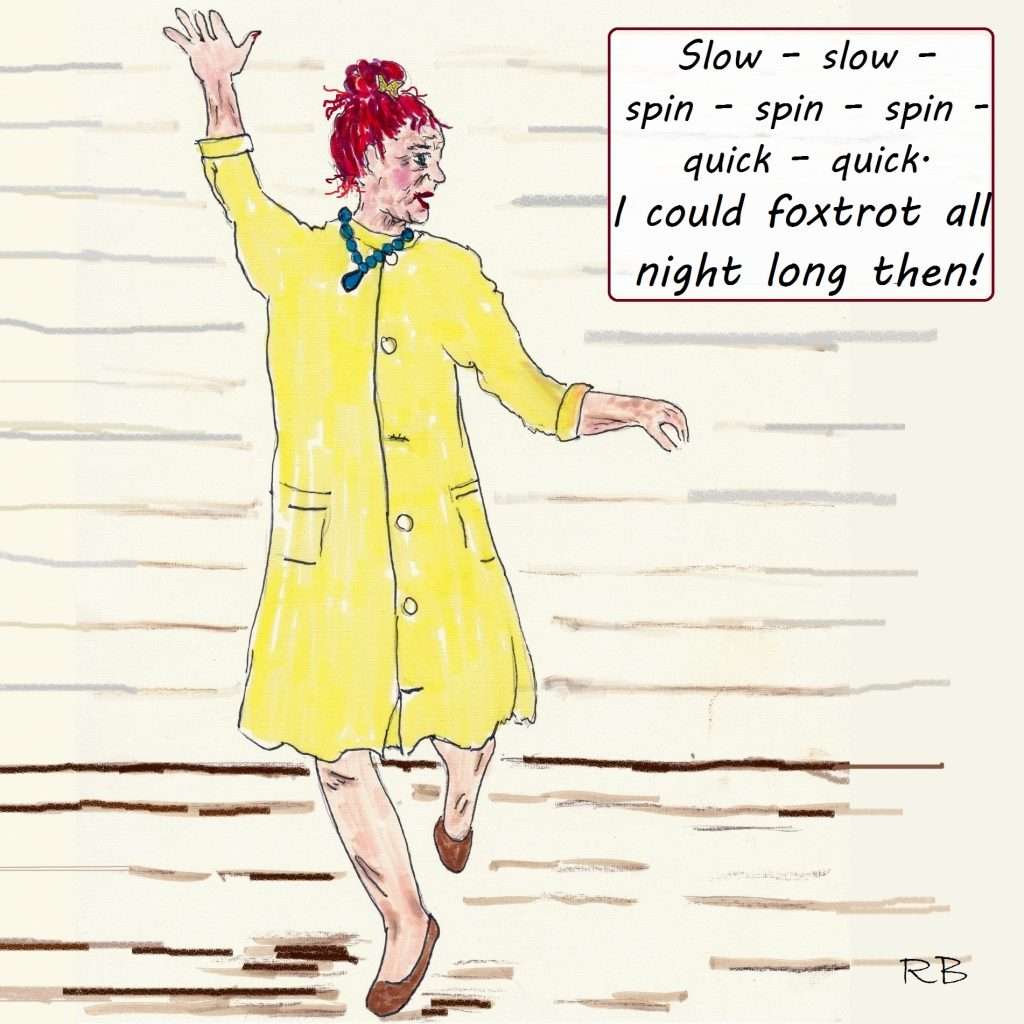 She moved and whirled to a beat only she could hear. Then she dropped into her chair. “Whew! That was fun. But I can’t keep up as I used to. Once I could foxtrot all night long.”

A Lady with a Tattoo?

“It was a grand time — a time of adventures. That’s why I got the tattoo — a remembrance of my adventures.”

“You have a tattoo?” Daddy had a tattoo of an Indian chief on his arm but I never knew a woman to have a tattoo.

“I do. Look here.” She took off her shoe. And she did! She did have a tattoo — a butterfly right on the top of her foot. I thought it would be brighter.

“Butterflies are free spirits — like me.” She touched her hairpin. “They’re my signature.”

“The tattoo artist used needles to put the color under my skin.”

“Some. But it was another adventure and I think adventures are important. Don’t you?”

Just then, I saw Mama drive by on her way home. The afternoon had gone too fast. I whined, “I have to go home for supper. I wish I could stay.”

“But isn’t it good you came my way? We’re friends now, so you’ll have to visit again.”

The next day was Sunday. We were going to church and Mama was taking me swimming. But I said, “I’ll come Monday. I promise.”

Time for My Next Adventure

Monday morning finally came. I ran back to the shotgun house. But Dottie Stone was gone. I guessed she’d found a nicer house. But now I had another whole day with nothing to do. I tried roller-skating. 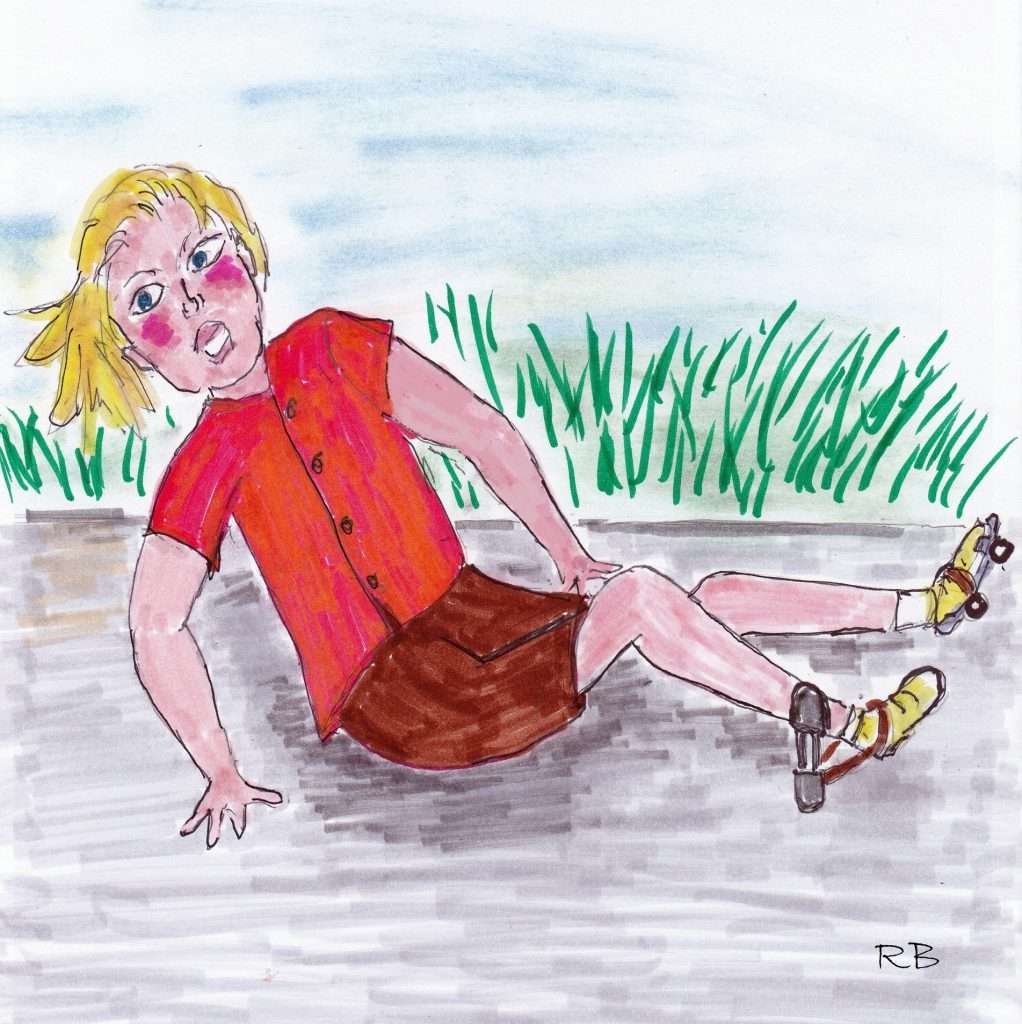 But I’d lost my skate key. I couldn’t tighten the skates around my shoes, so as soon as I lifted my foot, the skates pulled apart, flew around, and banged into my ankle. It hurt.

I went back to the shotgun house and sat on the rickety steps. I thought about Dottie Stone — the funny lady who loved adventures. She’d turned a day when there was nothing to do into a childhood adventure for me. 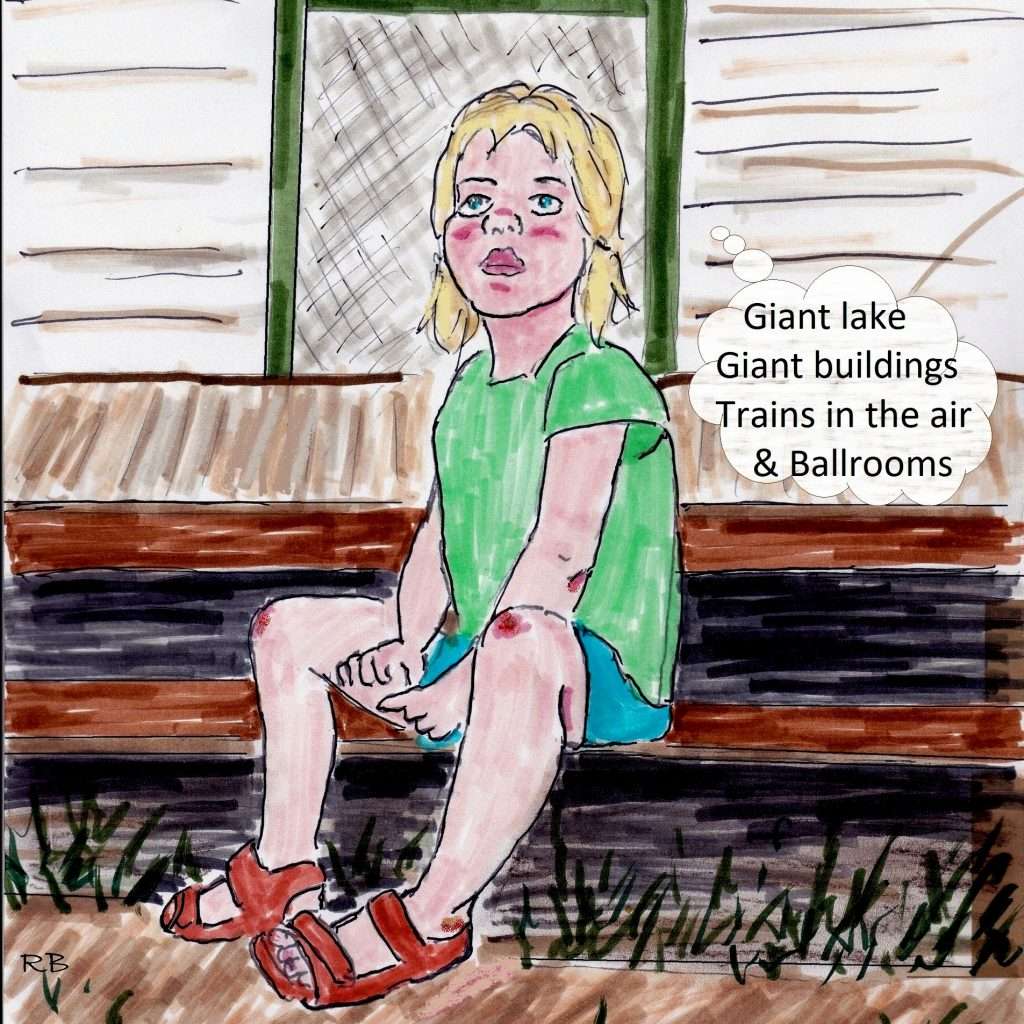 I whispered a promise to myself. “When I grow up I’ll have lots of adventures — and I’ll go see for myself the city with giant buildings, and trains in the air, and a lake as big as an ocean.”

August 2, 2021
WANT MORE RUTHI?
Subscribe to my newsletter!
Get latest updates and exclusive content straight to your email inbox.
Give it a try, you can unsubscribe anytime.