I grew up in Prichard, Alabama, listening to people tell stories. Daddy, Grandma, and the people in our neighborhood were great story tellers. Petain Street was a colorful place, paved with Alabama red clay that dried to a fine dust that colored the old mill houses and permeated my clothes.This street, that straddled the poverty belt, prepared me for the career I’d have someday, first in business development, then in building my own staffing business. I wouldn’t have seemed destined for such a people business because I was afraid and awkward with people, and terrified when those people were in a group. But I learned that I could take the spotlight off of me by focusing on the stories other people had to tell. 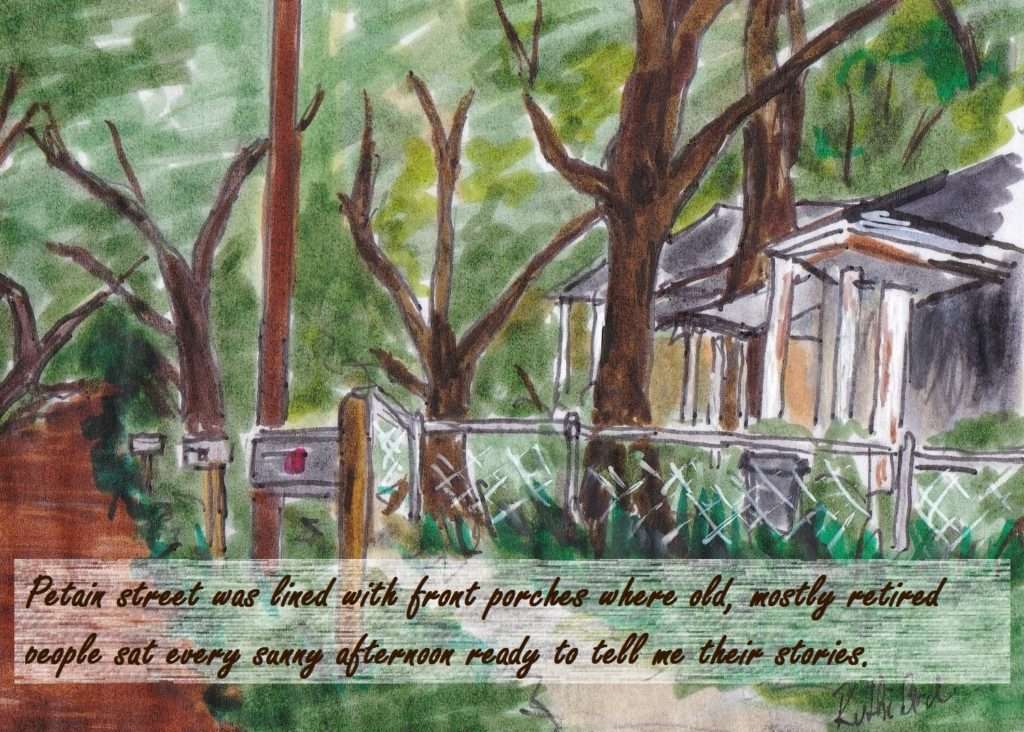 Lining the street were front porches where old, mostly retired people sat every sunny afternoon ready to tell me their stories. They taught me that people who didn’t look as though their lives would be all that interesting, actually had exciting, funny, or poignant stories to tell. They sent me into the world expecting people, all kinds of people, to have stories I’d want to hear.

I learned one of my most valuable career lessons when our elementary school had a drive to raise money by selling boxed all-occasion cards. As I went door-to-door to our neighbors, selling my cards, I discovered a secret that made selling so simple. All I had to do was listen to more stories. I’d knock on a door, and almost every time be invited to sit on a crocheted doily-covered chair or a porch swing, while the lady or man looked through  the different cards. As they oohed and aahed over the cards, they talked, but not about the cards.

They told me where their children lived, how they had made doll bridal bouquets from the little white flowers that grew along the fence when they were little girls, or about the one-room schools of their childhood. Some people surprised me by telling me personal and sad stories, and I wondered why they would tell a child such private things. When their stories were finished, they gave me the two dollars to buy the box of cards. I was the only child who had to ask the teacher for more boxes, because I’d learned people would happily reward the person who would hear them. 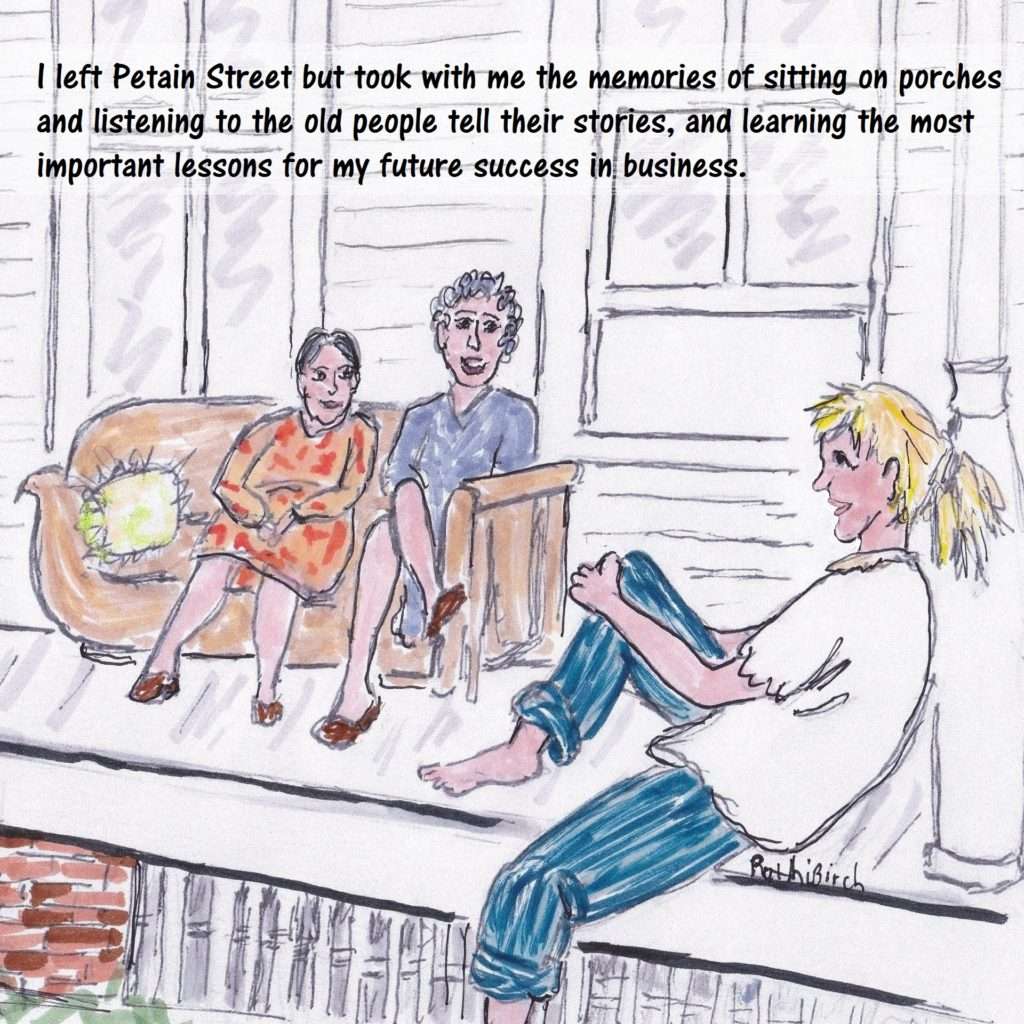 Then I grew up and left Petain Street. I’d always known  I wasn’t going to stay there, because as far back as I can remember, Daddy told me, over and over, “You’re going to get you an education, get off Petain Street and amount to something.” So when I left, I took with me a burning ambition to be somebody. I also carried the memories of those old people and their stories with me, and I had no idea how important they would be to my future.

It took some time for me to find the right career, and when I did, I was determined to succeed – and terrified that I wouldn’t. Looking at me people wouldn’t have known how much I was afraid. I was afraid that people were judging me, that people wouldn’t like me if they really got to know me, and mostly I was afraid I’d fail and wind up back on Petain Street. Fear wouldn’t  let me slow down for even a day or everything I had would disappear.

But I didn’t fail or go back to Prichard, and mostly because I used what I’d learned there, sitting on front porches and in parlors. People have stories to tell, joys to share, and pains to express, and they will give their time, their business, and their money to the person who will hear them. I listened to as many people as I could squeeze into a day, and my business grew.

I was even more surprised that these business people in Washington also shared personal, even heartbreaking, stories with a total stranger, but I gradually began to understand. There are some stories that hurt so much that the person has to talk about them, and so personal that they can only be told to a stranger who will listen. 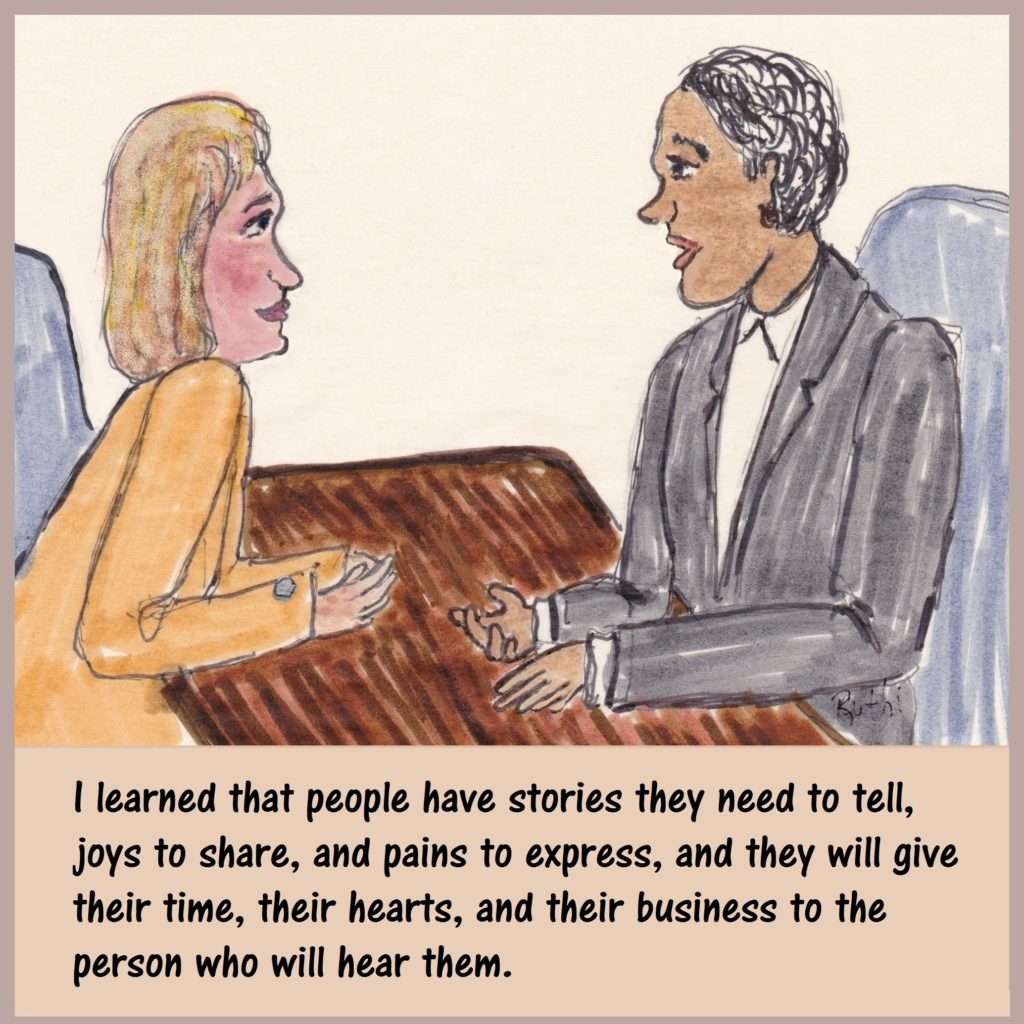 There came the day when I wasn’t the one listening, but I needed a stranger to hear me. I was in the office of a potential client, in the middle of a sales presentation when we were interrupted by his secretary who said my manager was on the phone and said it was important to interrupt us (this was before the day of cell phones). He handed me his phone.

My manager said my sister had called. I had to come to North Carolina—it was Mama and there wasn’t much time. I had to go now.

Business stopped. The man, whose business I’d come for, helped me make my airline reservations, supplied tissues, and listened. I told him all about Mama, how she looked when she smiled, how funny she was. I told him how I spent hours as a child drawing pictures of the house I would build for her someday. I had never gotten to do it, but last year I bought her an expensive coat—the first big gift I ever gave her. Now I would never have the chance to build her that house with terraces and a swimming pool and fountains.

I left his office for the airport to spend my last afternoon with Mama. Today, I don’t remember his name, if we ever spoke again, or whether we ended up doing business, but I do remember how it felt to have him hear me. He was the stranger who was there and willing to listen when I needed one.

October 16, 2017
WANT MORE RUTHI?
Subscribe to my newsletter!
Get latest updates and exclusive content straight to your email inbox.
Give it a try, you can unsubscribe anytime.