“You won’t believe what he’s [or she’s] done now!” When you hear this line coming from the HR department, you’re guaranteed an interesting story is coming — and almost always a bad boss story. Out-of-control bosses make the HR manager the most interesting person in the room — with stories that have comedy, absurdity, drama, and too often behaviors that shock even the most war-hardened HR manager.

Some bosses need bosses. The professionals in the human resources department have the job. They manage bosses to keep them from hurting feelings, insulting people, breaking the law, bumbling themselves into trouble — or getting sued. It doesn’t always work.

Allison said, “Mr. Gilbert ran into trouble with his new secretary. It wasn’t his fault. He’s the nicest man in the firm — too nice. Too open and friendly. I’ve tried to make him understand the world has changed. It’s not a good idea to make personal comments, even compliments, to the staff. He didn’t get it. His response was, ‘It never hurts to be kind.’

“He learned I was right the hard way. Before the new secretary started, I reminded him to keep his distance till he got to know her. And he tried.

“The trouble came because we made a mistake in hiring her. It started her first week. The way she looked at Mr. Gilbert, jumped up when he came in, or ran to bring him coffee was — I don’t know — doting … syrupy. He was oblivious to it.

Then, one day he paid her an innocent compliment. ” That’s a pretty dress.” The woman went from syrupy to stalker. She posed and giggled and touched his hand. He drew it away and tried to backpedal out the awkward situation. “I only noticed because it’s yellow. I’m colorblind and yellow is one of the few colors I see clearly.”

“It didn’t help. For the next week, she wore that same dress every day. It was weird. Then she started referring to him as Big Daddy. One of the other assistants jokingly asked, “Is that your favorite dress?”

“’I wear it because Big Daddy likes it. Whatever Big Daddy wants!’

“She pushed ahead of the other assistants in the copy room, saying, ‘Big Daddy needs these printed out right away.’ That’s when I heard about it and told Mr. Gilbert. And that was her last day as Big Daddy’s secretary.” 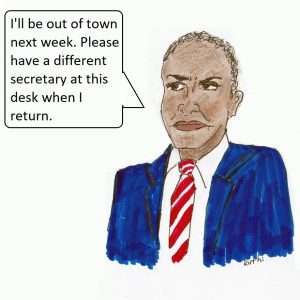 “I don’t think Mr. Gilbert will compliment anybody again, not ever, not on anything.” 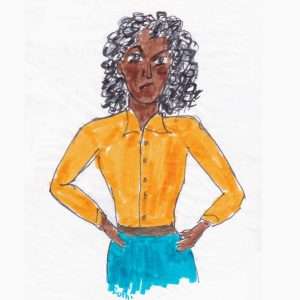 When Mr. Jackson left the meeting, Janet stood in her office doorway, staring after him and shaking her head. “That man lives at the center of the universe and everybody else is in orbit around him,” she ranted to Carl, the HR assistant.

Carl laughed. “That was quick. I take it that it didn’t go well.”

“No. I asked, “Frank, have you noticed that your assistant is limping and has bandages on her leg and her ankle?’

“Yes. But it’s okay. She’s getting the work done. So it’s not a problem. Thanks for asking. Now, I have to get to a meeting.”

She rolled her eyes. “Then, he stood up and left.”

“What happened to Shirley? Don’t tell me he beat her up.”

“Almost that bad. Yesterday he called her to come into his office to go over the list of things he needed her to do. She went in with her notepad, but tripped over his basketball sneakers dropped by the door, smacked into the coffee table, twisted her ankle, and fell to the floor.”

“Of course not! He started running his list. ‘Take these down. I need the reports on the Jackson case. Then call Jack Simmons’ assistant and set up lunch for Thursday. Order my new business cards ….’ and on and on. Still sprawled on the floor in pain, she took down his list. 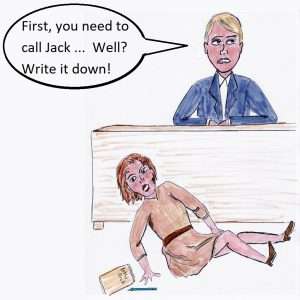 “Then he got up and left with her still on the floor. Luckily for Shirley — and the firm — she wasn’t badly hurt and she has a sense of humor. She told me he’s a jerk but he pays well.”

Carl laughed. “I imagine a comment in Shirley’s annual review, ‘I was inconvenienced by having to step over Shirley to get to my meeting.’”

WHY MS. HR HAS LAWYERS ON SPEED DIAL

Sharon was Mr. Smith’s assistant. One morning she appeared at the human resources door. And Marcia, the HR manager suddenly felt a hot flash of dread — bad boss stories can do this. 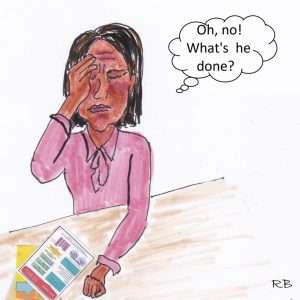 Sharon, a single mother who hardly ever showed emotions, was crying. She wiped her eyes and said, “I’m sorry to lose control this way.”

“Don’t be sorry, Sharon. Tell me what happened?”

“You know my daughter graduated last week. This morning I put her graduation picture on my desk. Mr. Smith came by and saw the picture and said, ‘Your daughter?’

“I said yes. I told him I was proud of her for graduating from college with honors and she was starting graduate school in the fall. Mr. Smith just kind of clicked his tongue and said, ‘She’s a pretty girl. Let’s hope she doesn’t make the same mistake you did — get pregnant and end up stuck in a dead-end job.’”

“I felt humiliated. I wanted to leave but I knew I should tell you.” 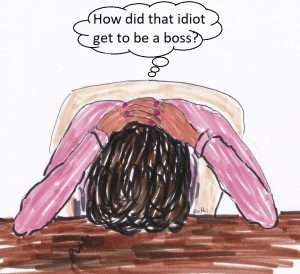 Then, she picked up the phone — the CEO and lawyers were on speed dial. And Marcia went to work making sure Mr. Smith would have a really, really bad day. 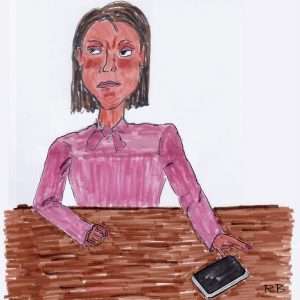 Bad bosses don’t make up the majority. But stories about good bosses rarely land on the HR desk. The blundering, oblivious, insensitive, or arrogant and self-important bosses keep the HR department busy with bad boss stories.

May 20, 2021
WANT MORE RUTHI?
Subscribe to my newsletter!
Get latest updates and exclusive content straight to your email inbox.
Give it a try, you can unsubscribe anytime.