A NINE-YEAR-OLD ON A TRAIN GOING TO DISNEYLAND

Mama loved riding the train. “Look out the window,” she said. “It’s just like we’re riding in a movie — you can see the whole country passing by.” 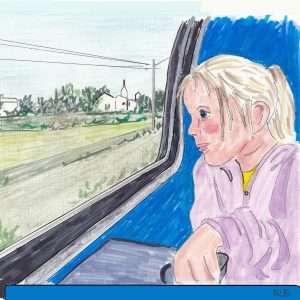 I looked out but what I saw were light poles racing by. Soon, that view faded to the one I saw in my mind’s eye — me riding the rides in Disneyland. 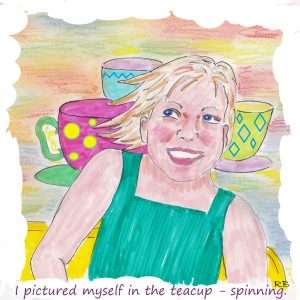 “Mama, did you know there’s a ride in a teacup!  It’s called the Mad Hatter’s Tea Party. I saw it on the Mickey Mouse Club. We get in a giant teacup on a big saucer. It goes round and round and we can make our own cup spin at the same time.”

She grinned and I could tell she was excited too. “We’ll have to ride it. We’ll ride them all.“ She was always up for adventures.

We had no way of knowing that Aunt Esther would cast a dark shadow over our fun.

Grandmama and Aunt Esther met our train in Los Angeles. I didn’t know what they’d be like because I’d hadn’t seen them since I was a baby. But I loved Grandmama right off. She was warm and fun like Mama — and she hugged great. 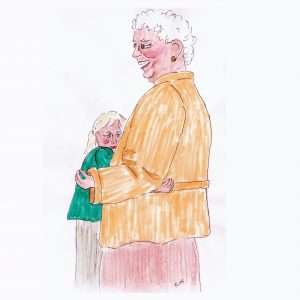 Aunt Esther was rich. She wore fur coats and had her fingernails polished — and she wore Sunday clothes every day of the week. I thought she looked like a movie star. 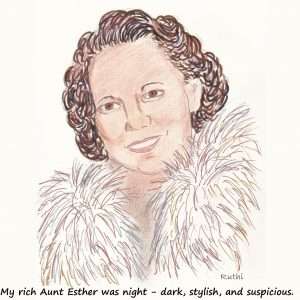 Aunt Esther and Mama were as different as night and day. Mama was day — plump, sunny, jolly, and fearless. She always made things fun. Aunt Esther was night — dark, stylish, proud — and suspicious. She saw threats everywhere.

It turned out Aunt Esther even saw threats in the Magic Kingdom.

We had dinner at her house the night before we were going to Disneyland. I couldn’t stop talking about it. Aunt Esther told me dinner was the adults’ time. But I didn’t think that meant I shouldn’t talk, so I babbled on.

“Let’s go to Fantasyland first. That’s where they have the Dumbo ride and Peter Pan’s flight and Mr. Toad’s Wild Ride, and the Mad Tea Party! Let’s do the teacups first. Okay, Mama?”

Aunt Esther put down her fork. “They’re too dangerous,” she said.

But Mama didn’t take notice. “There’s another ride I read about — the skyway. It will take us over the park from Fantasyland to Tomorrowland so we’ll see everything.”

“I will, too, get on that thing,” said Mama, sounding like a little kid mocking her big sister.

“Eva, it’s nothing but an open bucket held up by a thin wire. You’re not going to take your child hundreds of feet off the ground in an open bucket. If falls with you ….”

“We’re not going to fall,” cut in Mama. “Esther, it’s Disneyland. The rides are safe.”

“I certainly don’t trust that to be true. It’s a deathtrap. And the teacups you want to ride are just accidents waiting to happen. Do you know what holds them to the platform? Nothing except a few small metal bolts, and bolts wear down every time someone spins a cup. Eventually, they snap. What if you’re spinning around like a mad person and the bolts can snap? Then you, teacup and all, will sail into a pole or a wall and be killed.” 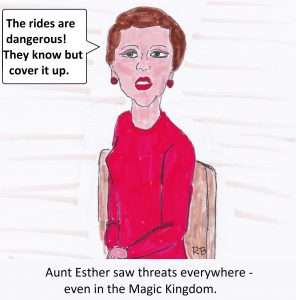 I was getting scared. “Mama, can that really happen?”

Mama gave Aunt Esther a look, and said, “No.” Then she laughed.

I giggled, but Aunt Esther cut my giggling short.

“Don’t laugh. It happened! A boy was spinning the cup when the bolts broke. He was flung into a pole and broke his back. That boy will be in a wheelchair the rest of his life!”

“Esther, stop it.” She looked at me. “That’s just a story. I’d have seen it in the news if some child was hurt.”

“Of course not. They covered it up. Disney brings a lot of money into California. Money can cover up anything. But it happened. A women in my club knows the boy’s family.”

“Eva, I can’t talk sense into you.” Aunt Esther started clearing the table. Then she smiled. “You’ve never grown up. You’re still that stubborn little girl with muddy knees playing marbles with the boys.”

I went to sleep with a picture in my head of Mama playing marbles with the boys. 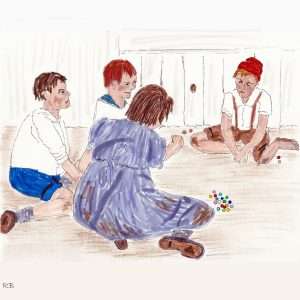 The next morning, when Mama and I walked into the Magic Kingdom, Aunt Esther was forgotten — for the moment. There was so much to see. As we walked down Main street, my head was shot back and forth as I tried to take it all in.

We reached Fantasyland, and there it was — the Mad Hatter’s tea party, the ride I’d dreamed about. We were buckled into a pink teacup and the platform started going around and up and down. Mama grabbed the little wheel and turned it. Our teacup started to spin.

I gripped the wheel and held it so tight Mama couldn’t budge it.

“No! It will break. We’ll be killed! Or crippled!” 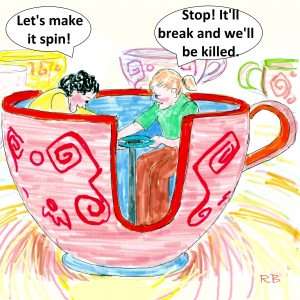 OTHER CUPS WERE SPINNING. OTHER CHILDREN WERE LAUGHING. 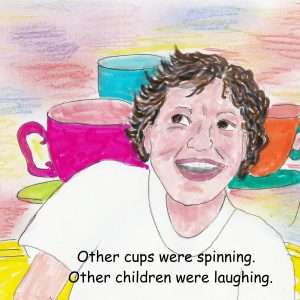 Mama tugged at the wheel but only managed one slow spin.

Then the ride was over. And I’d missed it — I’d missed the ride I’d been most excited about. I started to cry. “Mama, I wanted to spin the cup. But I didn’t want to die.”

IF YOU LOOK FOR THEM, YOU CAN FIND REASONS TO BE AFRAID

We sat on a bench and Mama held my shoulders. “Now, you stop this. We weren’t going to die! You have to ignore the things Esther says. She looks for things to be afraid of. Some people are not happy unless they can find something to be unhappy about. I feel sorry for Esther.”

That was funny, I thought. “Sorry for Aunt Esther? She’s rich.”

“Yes. With all her money, she doesn’t know how to have fun. She always finds reasons to be afraid. But her silliness is not going to mess up any more of our day. Let’s ride something — Mr. Toad’s Wild Ride.”

I felt better. We bounced through Mr. Toad’s world in our jalopy, laughing, then rode Dumbo. After, we had lunch on the pirate ship, Mama got in line for the Skyway. Aunt Esther popped into my head — “hundreds of feet off the ground in a bucket hooked to a thin wire?” I looked. It was a bucket. And the cable really did look thin.

“Mama, I don’t want to go.” She ignored me, pulled me into the bucket, and off we sailed. I held Mama’s hand for dear life and closed my eyes until Mama said, “Look. Snow White and Goofy look like ants. Open your eyes.” I looked and they really did.

We walked every inch of Disneyland and rode most of the rides. Mama wasn’t afraid of anything and she never seemed to get tired. It was like she was the kid, insisting, “Come on. One more ride.”

Going to Disneyland with Mama was a blur of fun and firsts — Marching bands, Mickey Mouse, Goofy, ice cream sundaes, my first corndog, and rides in canoes, trains, and jet airplanes. Still, I was left with one regret — that I didn’t spin that teacup! If I ever make a bucket list, the Mad Hatter’s Tea party will be on top. I’ll go back to Disneyland and I’ll get in that teacup and I’ll make it spin so fast it sings! And when it’s done, I’ll hear Mama say, “Come on. Just one more ride.” 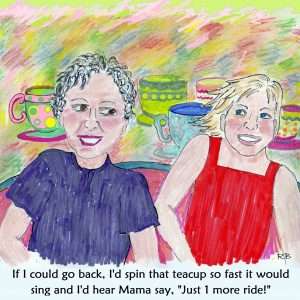 February 2, 2022
WANT MORE RUTHI?
Subscribe to my newsletter!
Get latest updates and exclusive content straight to your email inbox.
Give it a try, you can unsubscribe anytime.