A Lesson I Wish I Hadn’t Had to Learn

Daddy was a proud man. That’s why I still cringe when I remember the day I shamed him and learned a lesson I wish I hadn’t had to learn.

When I was a little kid, I thought my Daddy was something special. He was a tugboat captain. It was a much more exciting job than the other daddies’ jobs. One day the teacher asked us to stand up and say what our daddies did. I raised my hand and waved it to go first and tell them how my Daddy, the tugboat captain, ran boats all around the Gulf Coast to Texas and even on the ocean all the way up to New York City.
But when I was nine, Daddy quit being a tugboat captain. He took a job called air compressor operator at Brookley Air Force base in Mobile. Air compressor operator wasn’t a job I wanted to brag about, especially since I never understood what it was anyway. I knew Daddy’s job wasn’t special anymore, but I didn’t tell him.

The day I shamed Daddy was supposed to be fun. He picked me up from school to take me to buy school shoes at JCPenney. Then we were going to Kress’s for a sundae. But first he said he had to go to downtown Mobile because he had to meet a banker at the Merchant’s Bank. I was afraid we’d run out of time for the sundae. I whined and asked why we had to go meet some old banker. Daddy said, “I’m opening an account with that bank and I want to know the man who banks my money.”

It was my first time in a bank and I thought it looked like a palace. The room was bigger than a church, and fancier than any church I’d seen, with silvery floors, walls painted with pale blue rainbows, and a round ceiling that looked like a night sky full of stars. 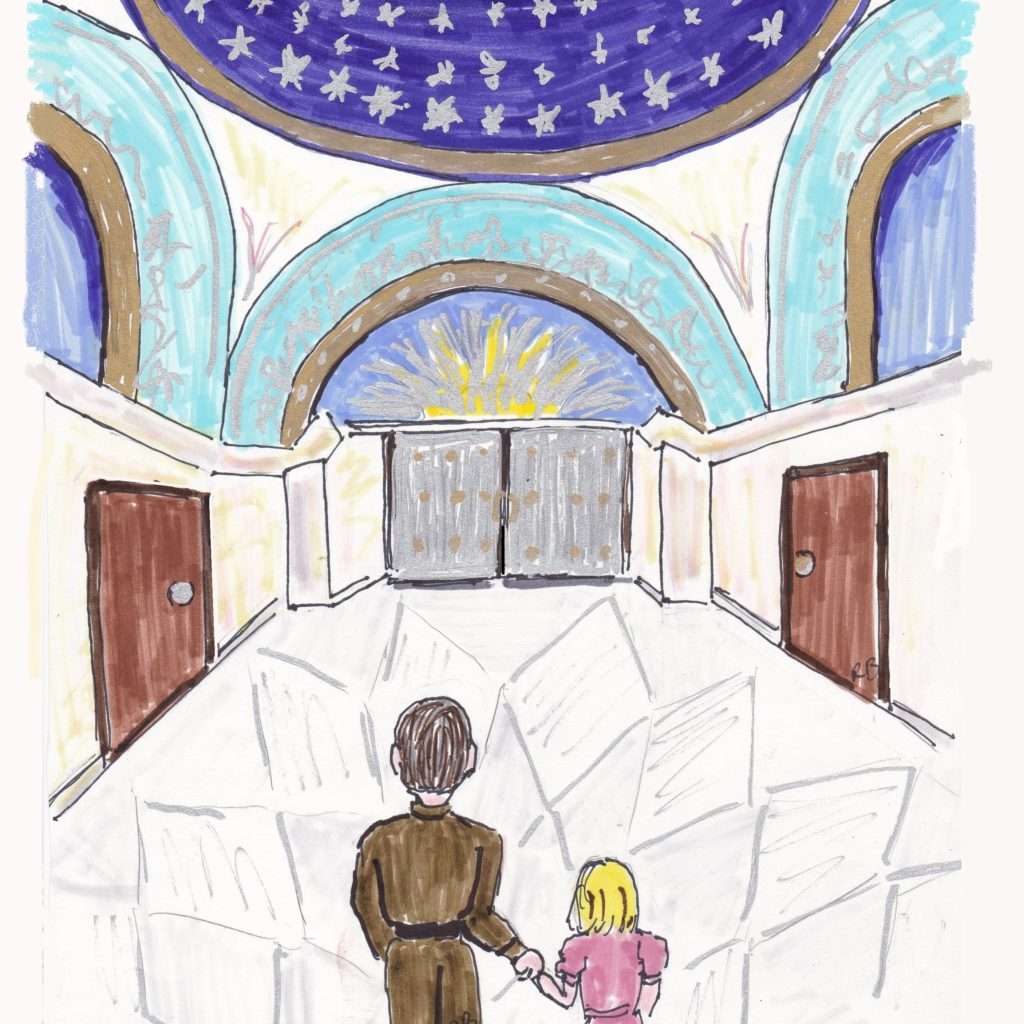 The banker, Mr. Dyson, came out, shook Daddy’s hand, and took us into his office where Daddy sat down beside his big desk. I looked around the office and at the banker. I knew he was important in his fine blue suit, starched snow white shirt, and tie. Suddenly I looked at Daddy, and saw his green khaki shirt and pants, and I was embarrassed. 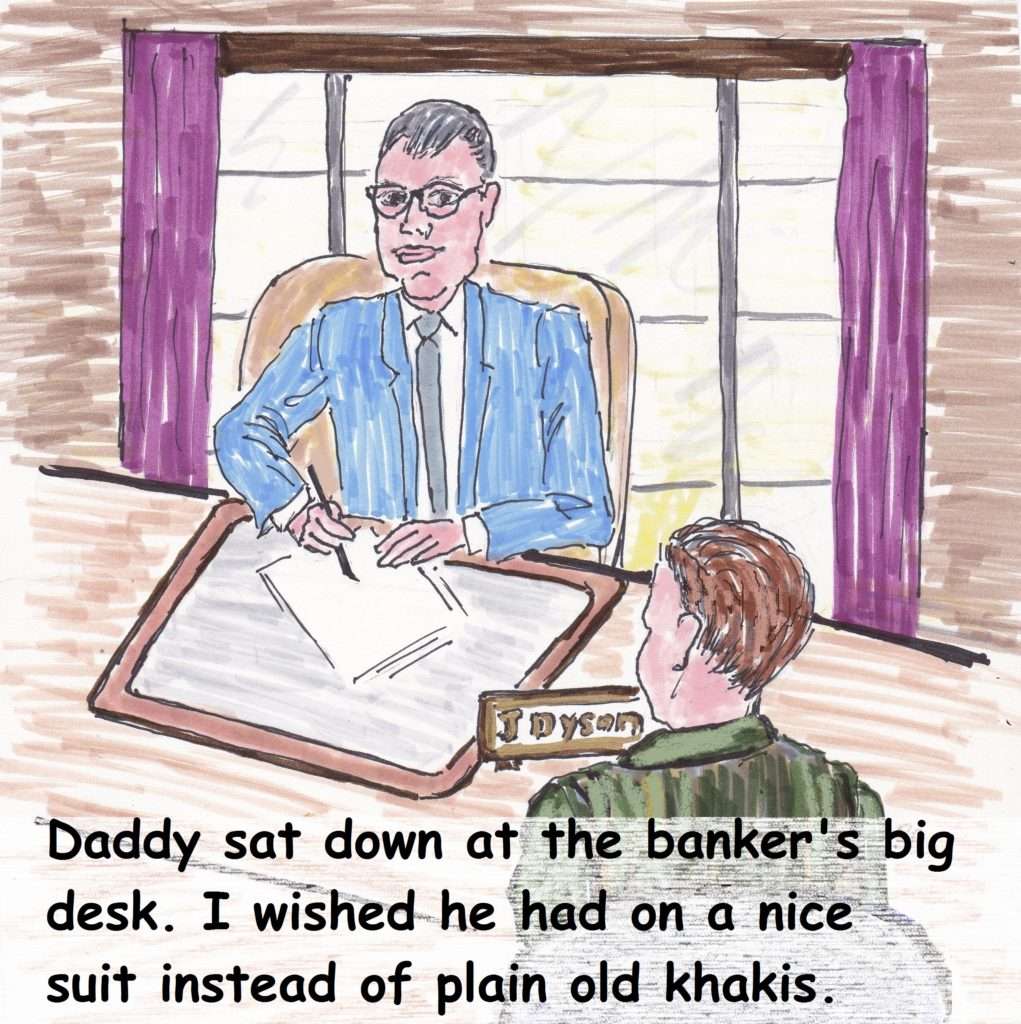 I didn’t say much on the drive to JCPenney. I was still thinking about how Mr. Dyson looked and wishing Daddy didn’t have on his old khakis.

The shoes I wanted were penny loafers. Daddy bought them and put pennies in the slots. Then he said he wanted to stop in the men’s department so he could get some clothes. I was excited. Maybe he saw that he wasn’t dressed as nice as Mr. Dyson too. Maybe he would buy a suit. But he walked right past racks of men’s pants, dark suits, bright white shirts, and ties in all colors. I pointed at them, but he went to the shelf with the same khakis, picked up a shirt and pair of pants.

While he was paying the salesman, I blurted out, “Daddy, why do you have to always wear khakis instead of nice clothes. Why don’t you get a suit and white shirt like Mr. Dyson at the bank?”
“Hush!” he said, and finished paying the salesman. I saw his face. His jaw was set and his mouth was a straight line. I knew I was in trouble. 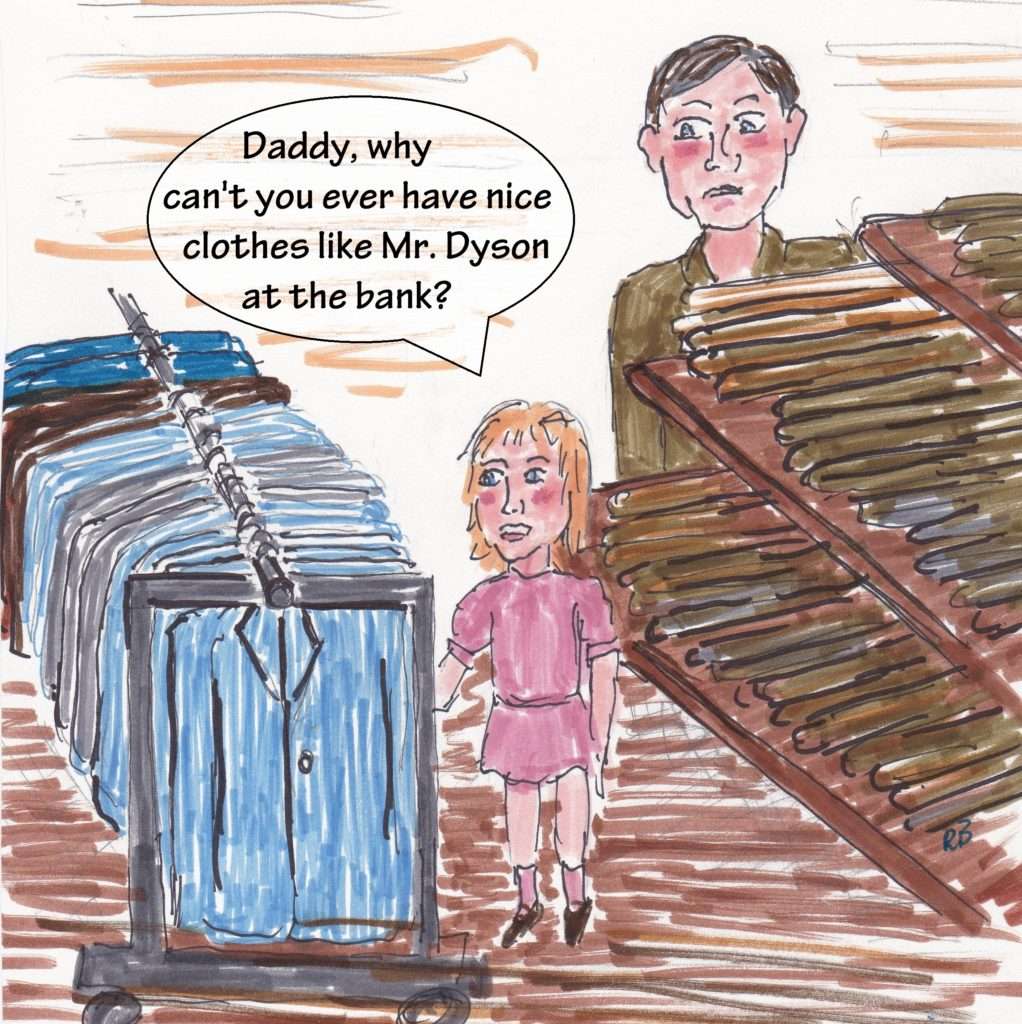 As we walked out of the store, I wished I could run away or disappear. We headed to the car instead of going into Kress’s. He didn’t turn on the engine, just sat there, quiet, for what seemed forever. It would have been better if he’d yelled. Finally he said in a calm voice.

“I’m going to tell you something important and I need you to pay attention.”

I started to say I was sorry, but he put his hand up to quiet me. “I know we don’t have as much as some people. No, we don’t. And I don’t dress in fancy suits. But that’s all right. I’m not ashamed. Hear me. You can’t be shamed by the cost of your clothes if they’re the best you can do and they’re clean and neat. Why, I’d sooner trust a man in clean overalls than one in a dirty suit.”
I stared down at my lap, ashamed and sad that I’d embarrassed Daddy in front of the salesman and hurt him. My face felt red hot and I wanted to cry. But Daddy wasn’t finished, “Look at me. I want you to remember this. Always be proud of who you are. Don’t try to be something you’re not. It never works.

“I do an honest job. My clothes are the right things to wear to work for the work I do. It would be just as wrong for me to go to work dressed like Mr. Dyson, in a suit and tie, as it would be for Mr. Dyson to wear this. If I wore a suit I couldn’t work for fear I’d get diesel fuel or oil on it. The men I work with would think I was putting on airs. If Mr. Dyson wore khakis, I wouldn’t trust him to bank my money.”

Even now I cringe a little when I think about how I shamed Daddy. But I learned something that day about pride and dignity. Daddy was a proud man.

He knew who he was, and whatever clothes he had, he wore with dignity.

February 5, 2019
WANT MORE RUTHI?
Subscribe to my newsletter!
Get latest updates and exclusive content straight to your email inbox.
Give it a try, you can unsubscribe anytime.