“Other children have excuses,” Mama told me when I brought home a bad grade. “Other children don’t have enough to eat, and have to work after school, or take care of little brothers and sisters. You don’t have excuses.” When I grew up, I set my career goal to become a successful business woman. I had succeed – I had no excuses.

Mama was beloved because she generous, interested in people, and the most fun of anybody I knew. But she wasn’t a marshmallow, agree-to-please kind of woman. She knew what she believed, and she stood up for it and she spoke up for it, whether other people liked it or not. That was the example she set for me.

Daddy inspired me to “be somebody.” Mama taught me how – by example. She got things done and expected I would too.

#2: Don’t accept the limits other people try to put on you.

J.C. Penney’s tried to tell Mama a woman couldn’t have a credit card. It was in the 1950s before the credit card explosion. Nobody we knew had credit cards. Visa and American Express didn’t exist yet, and department store charge cards were just becoming popular. Mama decided she wanted one and filled out the credit forms in her own name, writing Daddy’s name in the blank for “spouse.”

When her Penney’s card came, the name on it was Mr. N. G. Simmons. She took it right to the manager of the store in Prichard. Back then managers were almost always men. “This is my credit card and that is not my name.” He argued with her in that manager-talking-to-a-woman tone. It might have seemed polite if it weren’t so snooty. “But Mrs. Simmons, that is how it’s supposed to be done. All cards have to be in the husband’s name.”

She didn’t let the man upset her and she didn’t back down. She was the one in control and she knew it. “Well, my card certainly does not have to be in any other name, and it will not. I have a job, I earn my own money, and I pay my own bills.

I suppose Penney’s had to have a new card press made that let them stamp “Mrs.” But Mama got her card.

A photo of Mama as a girl

When I was eleven, Mama’s brother, Uncle Ervin, came to visit from California and told stories about Mama. He when Mama was a little girl, she was a tomboy. I couldn’t believe it. But he said, “She was! She climbed trees and could play any games the boys played. But boys didn’t want to play with a girl. She always pestered us to let her play marbles with us. We said, “Go play with your dolls. Marbles are for boys!  But she kept on till we let her in.

I could picture that. Anybody who said Mama couldn’t do something, should stand out of the way and watch – she wouldn’t quit till she did it.

Her convictions weren’t limited to games. At a family dinner during the Korean war era, she shocked everybody when she announced, “If men are drafted, women should be drafted too.” 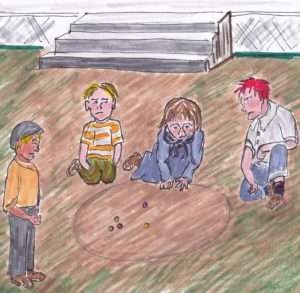 Mama winning at marbles, to the disappointment of others

There was more to Uncle Ervin’s story. “We let her play and expected to laugh. But she won all of our marbles. We never played with her again!”

When he finished, Mama got up and, without a word, went to her room. She came out wearing a crooked little I’ve-got-a-secret smile and carrying a cloth bag. She sat down, opened the top of the bag, and poured the boys’ marbles onto the table in front of Uncle Ervin.

Mama wasn’t satisfied to be allowed into the game. She was there to win!

The boys never saw her coming. Mama was determined to win, but she didn’t brag about it. She practiced! By the day of the game, Mama was a skilled marble shooter. She kept her bag of marbles because she had worked for it.

Mama’s lessons did more than make me successful.

They changed the way women were regarded in the staffing business.

I started my career at a time when women were ready to hear Mama’s lessons. Girls had always had excuses and were ready to stop. Girls had been accepting the limits other people thought they should have. And girls knew they weren’t supposed to play the boys’ game – even if they did, they were not supposed to win. 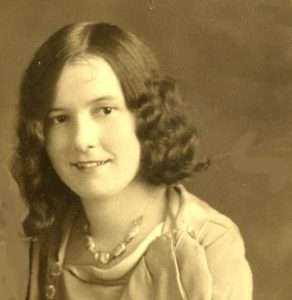 A photo of Mama, who taught me how to be somebody

In the staffing firm where I went to work there were two divisions. My job was in the SOC division where a half dozen girls placed secretarial-office-clerical workers. We weren’t paid salaries, but earned commissions for the people we placed in jobs. The more people we paced, the more we earned. I loved the business and the competition, and became the top producer in our division.

The professional division was where the men worked. The idea of a competition between the divisions ludicrous. The men would win! They always won, always out-produced and out-earned the girls.

That was the way it was until my Mama’s lessons changed things. I saw the bigger game and I wanted to play. There was a man on the professional side who was breaking all records. He was the one to beat.

Following Mama’s example, I didn’t tell anyone what I wanted to do. I just worked.  It took two years but I finally did it! A woman was the top producer in the company. I’d won, and changed the thinking about what women could do in the staffing business. Of course, that’s what Mama would have expected of me – I didn’t have any excuses.

June 8, 2017
WANT MORE RUTHI?
Subscribe to my newsletter!
Get latest updates and exclusive content straight to your email inbox.
Give it a try, you can unsubscribe anytime.